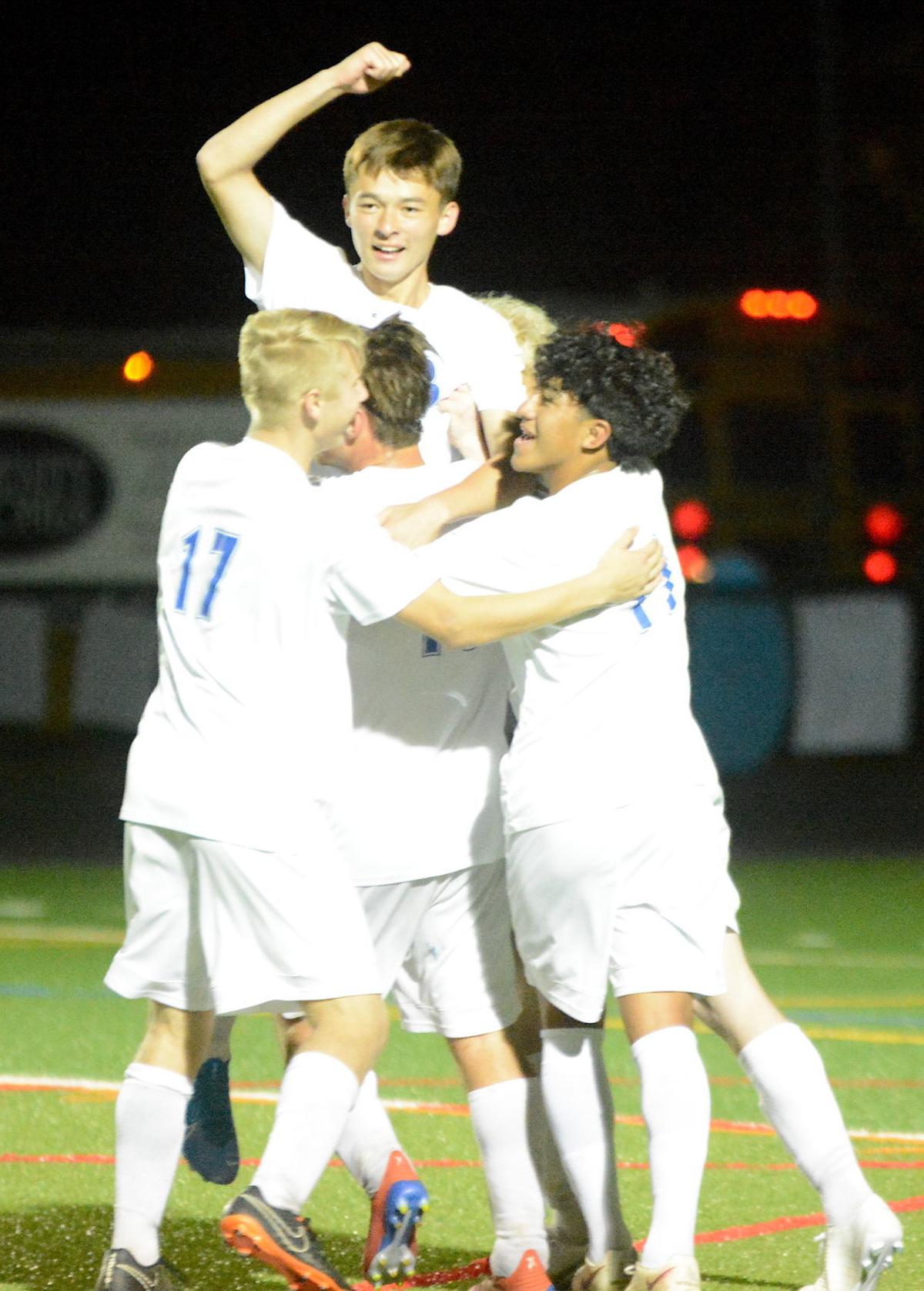 North Caroline’s Nick Chong (top) gets a lift from his teammates Tuesday night after scoring the final goal in the Bulldogs’ 3-1 victory over Kent Island. 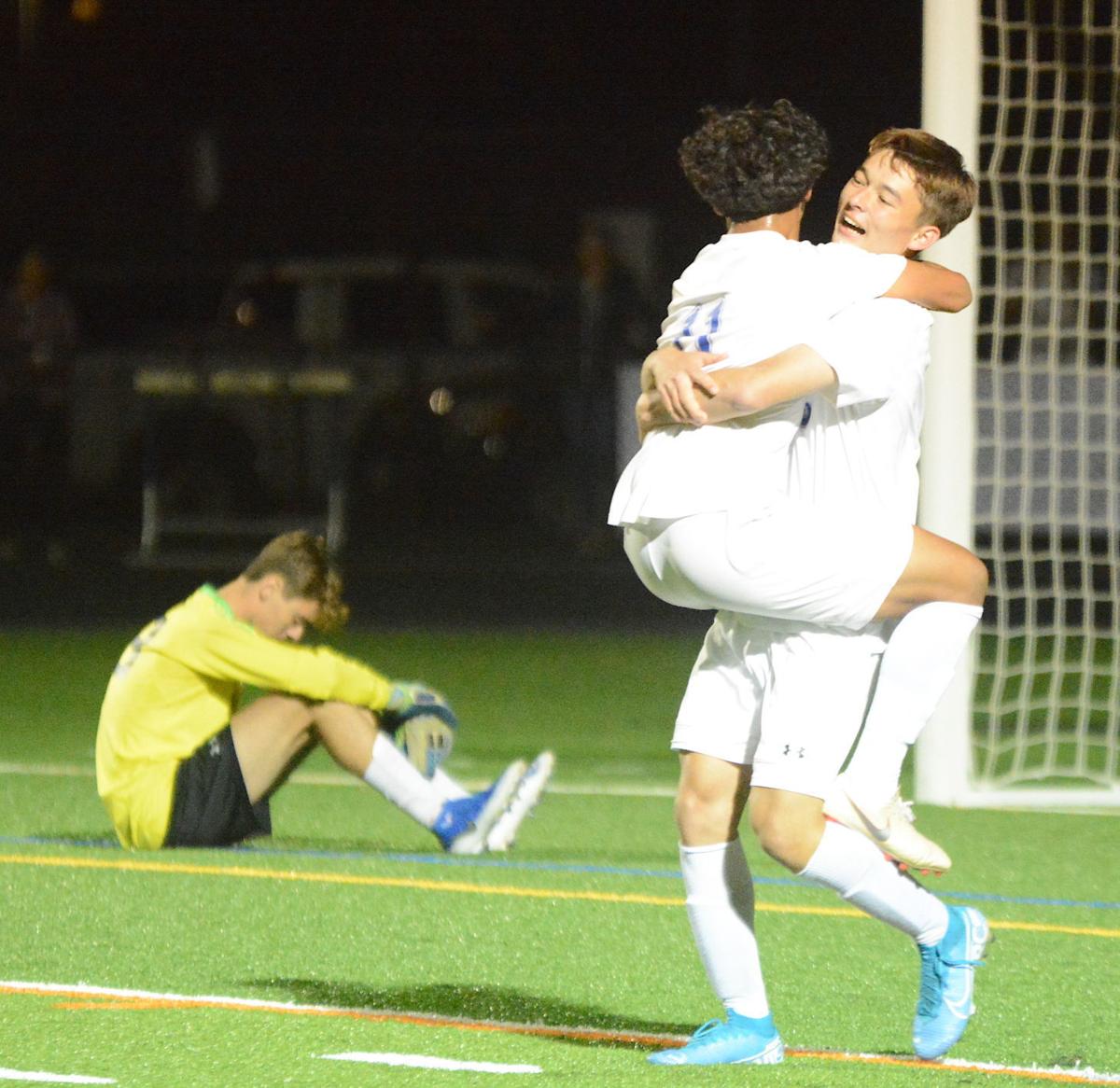 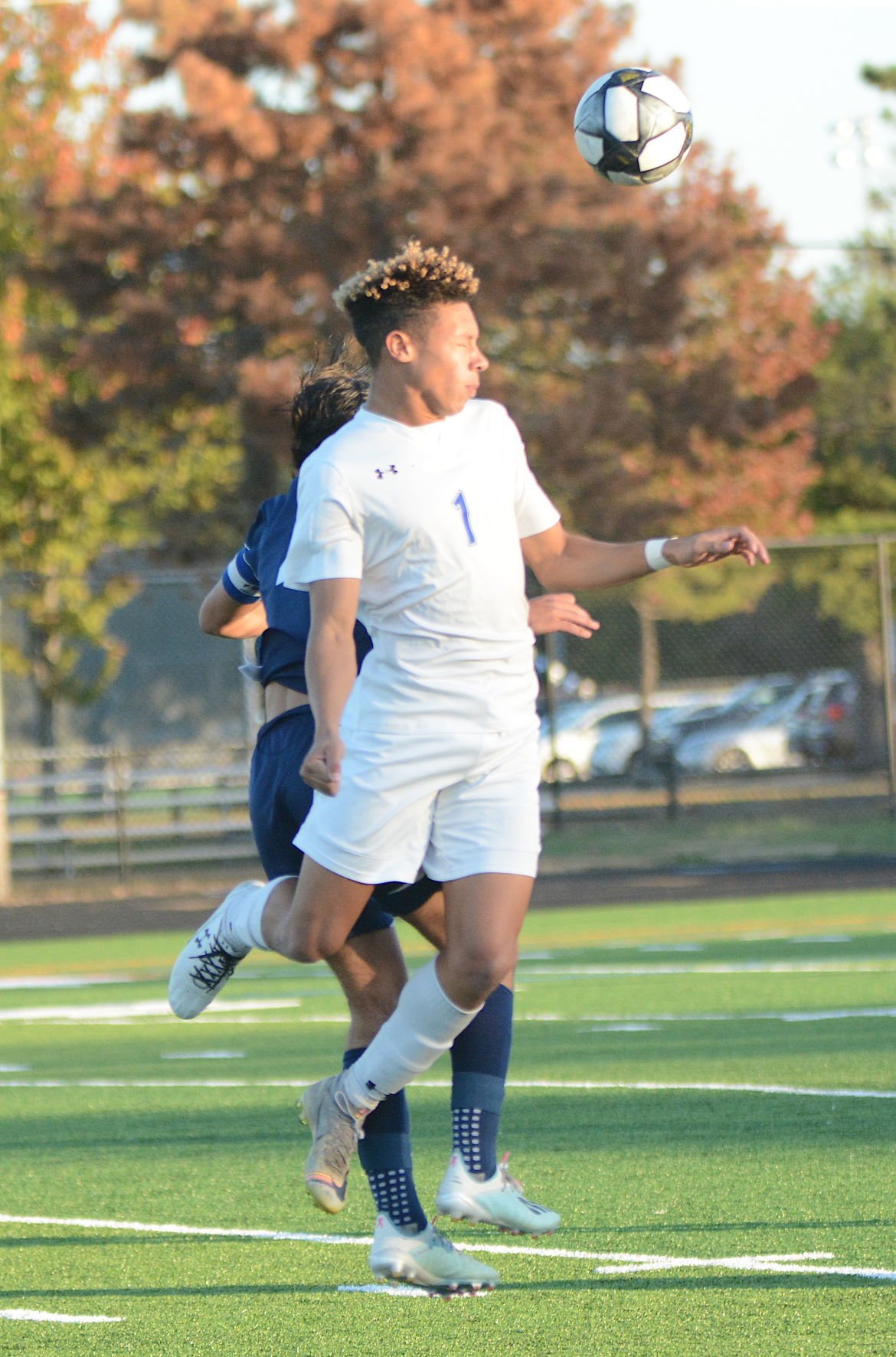 North Caroline’s Justin Tasker (1) strikes a header during the first half of Tuesday’s game against Kent Island. 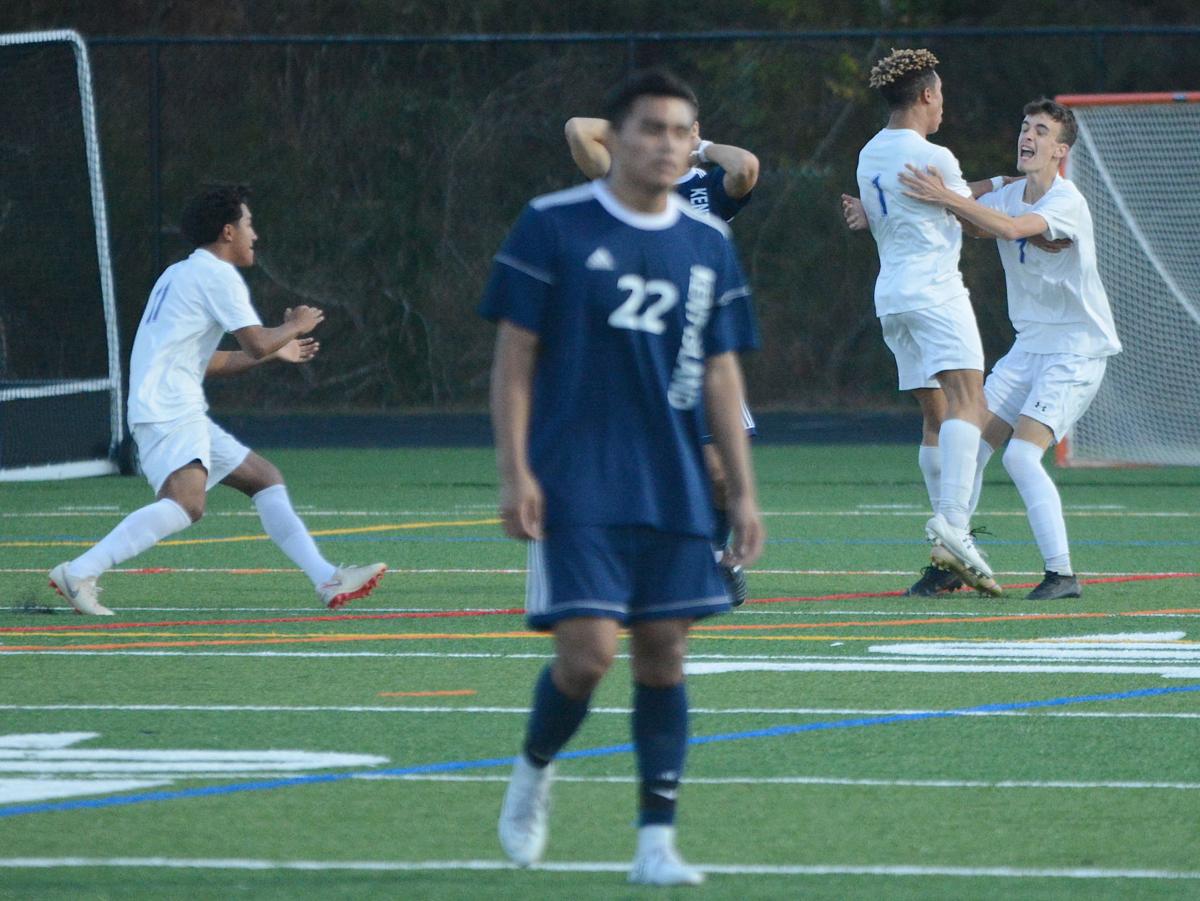 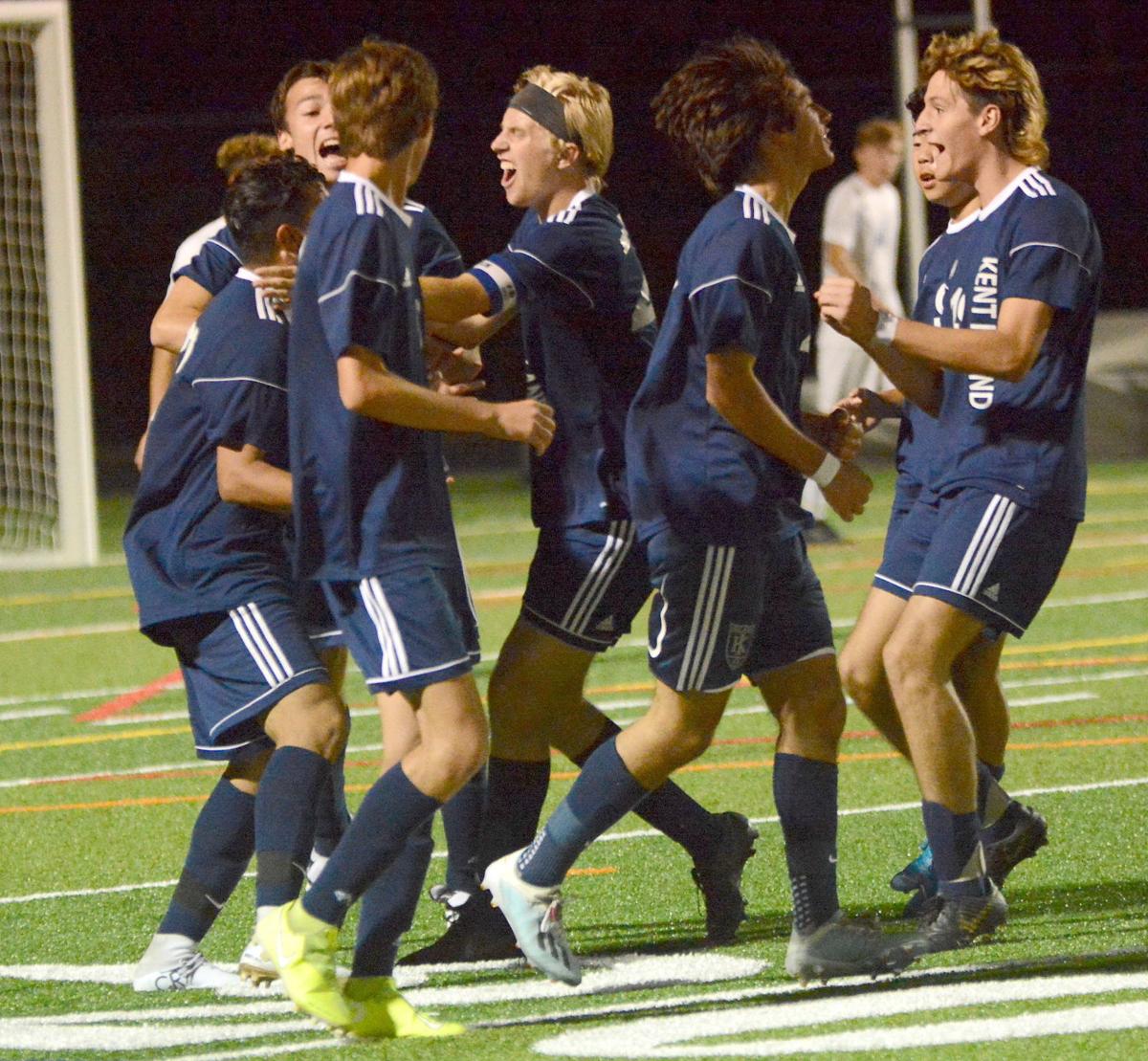 North Caroline’s Nick Chong (top) gets a lift from his teammates Tuesday night after scoring the final goal in the Bulldogs’ 3-1 victory over Kent Island.

North Caroline’s Justin Tasker (1) strikes a header during the first half of Tuesday’s game against Kent Island.

STEVENSVILLE — It hasn’t clinched anything just yet.

Justin Tasker struck a lightning bolt from about 30 yards out for the go-ahead goal with 10 minutes, 26 seconds remaining, and Nick Chong added a touch of insurance with a shade over a minute left Tuesday night, as North Caroline High’s boys’ soccer team moved within a win of its first North Bayside title since 2008 with a 3-1 victory over three-time defending division champion Kent Island at Andy Schipul Stadium.

Kent Island outshot North Caroline, 9-2, in the first half, but put only two shots on net, which were both stopped by Bulldogs keeper Chris Jones, including a save on a direct kick 9:30 before intermission. Then with 5:48 left in the half, North Caroline’s Luke Williams settled a ball on right wing, calmly moved in, and hit a ball into the right side of the net past Bucs starting keeper Kris Krause for a 1-0 lead.

“First half especially I thought we had numerous chances,” Kent Island head coach Lin Outten said. “I think we should have been up a goal or two at the half. I was surprised we were down. Our goalie had hardly touched the ball. So I think that was the tale of it was the first half. We should have been out in front. We played well enough to get a goal or two.”

Kent Island pushed the pace in the opening 10 minutes of the second half. Carlos Chevez hit a drive wide left. Patrick Outten hit the left post. Then in the 13th minutes, Jones caught an innocent shot, briefly dropped it, then pounced on it before the charging Chevez could reach it.

Less than three minutes later though, Ryan Callaghan fed a pass to Chevez, who blasted a shot from left wing into the upper right corner for a 1-1 tie with 24:36 remaining.

“They’re a hard, tough team to play against,” Lin Outten said of North Caroline. “They’re a great team together. They deserve credit for how hard they play. And getting a goal right before the half was a key. I think we were playing from behind for too long. We did ultimately tie it, but it just felt like we were clawing back almost the whole second half.”

Four minutes after netting the equalizer, Kent Island had three big chances in succession to take the lead. Chevez boomed another missile from left wing that went wide right past a lunging Jones. Caleb Bradfield gained possession and fired wide left. Chevez collected the ball and sent a cross that Callaghan headed over the crossbar.

Tasker put a low roller right on goal that Kent Island’s second-half keeper Ethan Mollman stopped. Less than five minutes later, Blue steered a pass toward the middle of the field to Tasker, who pivoted and hammered a right-foot rocket over the head of Mollman for a 2-1 lead.

“My friend Brett Blue, he just turned it with a no-look pass,” Tasker said of the go-ahead goal. “I’d been telling him the whole game to give me the ball. And he did that no-look pass and I just hit it. It just went over the goalie’s head. I don’t think the goalie was expecting it. I was crazed.”

“Honestly, I thought the whole time we’d have two or three goals,” Coach Outten said. “When the ball got over our goalie’s head for their second goal I was a bit surprised because he hadn’t been under much pressure. But they fought back and the kid hit a great shot, and our goalie couldn’t quite get it. And it was the difference in the game.”

The Bucs managed a few more runs into Bulldogs’ territory in the remaining 10 minutes, but couldn’t get off any real strong shots on Jones.

Then with 1:01 left, Blue sent a direct kick right in front of the net. In the ensuing scramble, Chong appeared to get his heel on the ball and back-kicked it into the net to cement the victory before getting mobbed by his teammates.

“We talked about crashing the net,” said Austin, who was on the receiving end of an ice bath afterwards. “We know our set pieces are good. We just have to more aggressive. The second half we got more aggressive.”

North Caroline players bounced all around the field after the final whistle, and as they returned to their bench, Austin grabbed Tasker for a brief one-on-one.

“Justin’s been a four-year varsity starter for us,” Austin said. “He has started every game. You could see he was just going to take the game over. You could see it. He was all over the field and he made a promise to me his sophomore year. He said, ‘Coach, we’re going to play in the Bayside championship game.’

North Caroline and Kent Island could draw each other again next week in the Class 2A East sectional playoffs. But before that potential date, Tasker wanted at least one victory over the Bucs.

“I wanted this game really bad,” Tasker said. “I’ve been wanting it since freshman year. Kent Island has beat us all the years in a row since I’ve been a freshman, and I just wanted it really bad.”

SHILOH — Devin Vasquez scored for the Warriors (5-4-2, 3-2-2), while Jackson Cronan posted the shutout with four saves.

CENTREVILLE — The Lions with two late goals and then settled for a 2-2 tie in the shootout.

Down 2-0, Sarah Bowyer scored unassisted with 6 minutes, 49 seconds remaining in regulation, and then added the equalizer with time expired on a corner. Goals from McKenna Horner and Gracie Daniels staked the Jaguars to the lead before Queen Anne’s rally.

In the shootout, Washington’s Hannah White gave the visitors a 1-0 lead after a Lion miss, and Katie Ray tied it up for Queen Anne’s. Horner made it 2-1, Jaguars, and Bowyer scored her third goal to tie it 2-2. Lions goalie Belle Fields preserved the draw on Washington’s final shot, and she finished with 11 saves, including the three in the shootout.