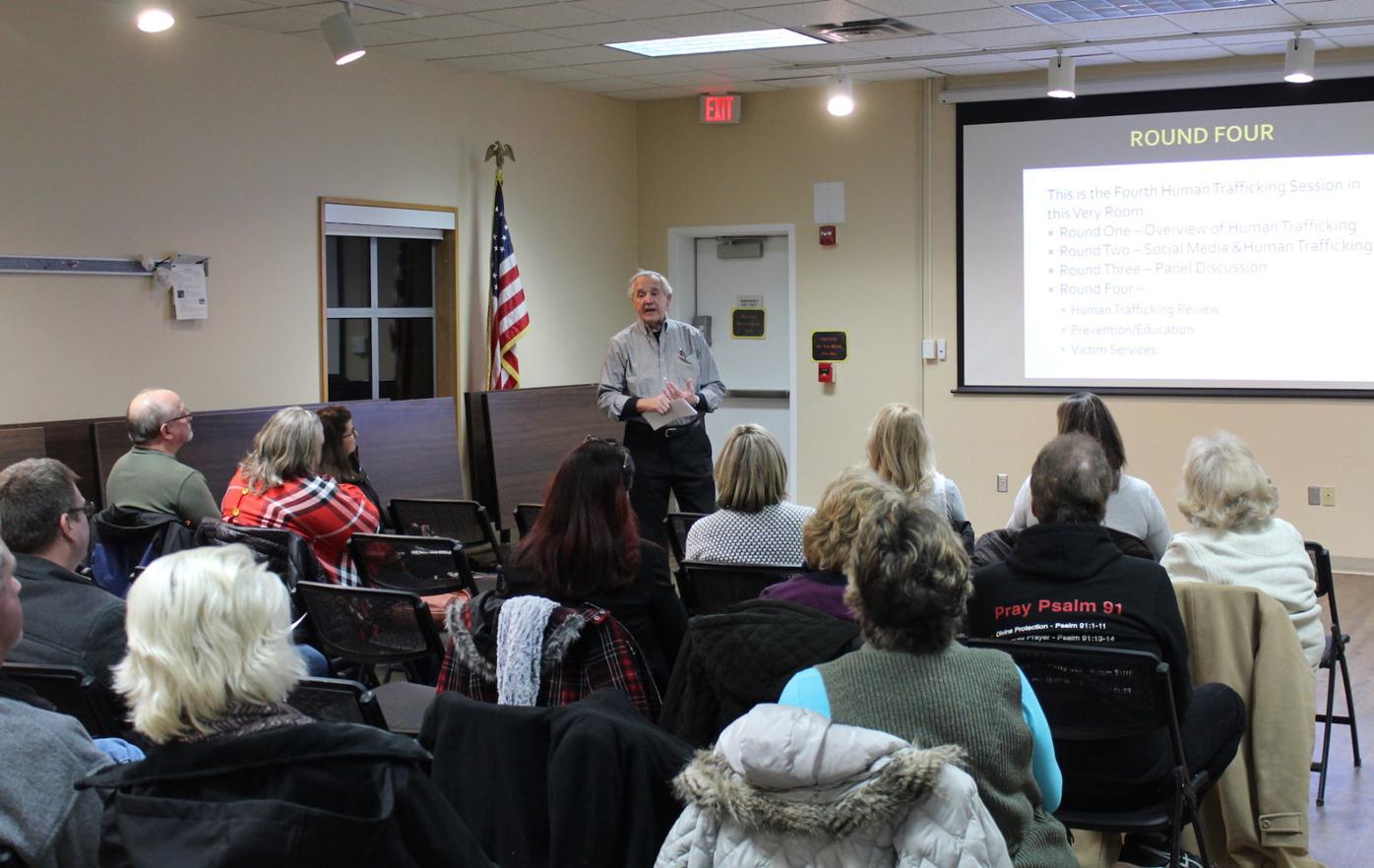 Ed Thomas, co-chairman of the Eastern Shore Human Trafficking Task Force, discusses the process of human trafficking during a presentation at the Kent Island Library. 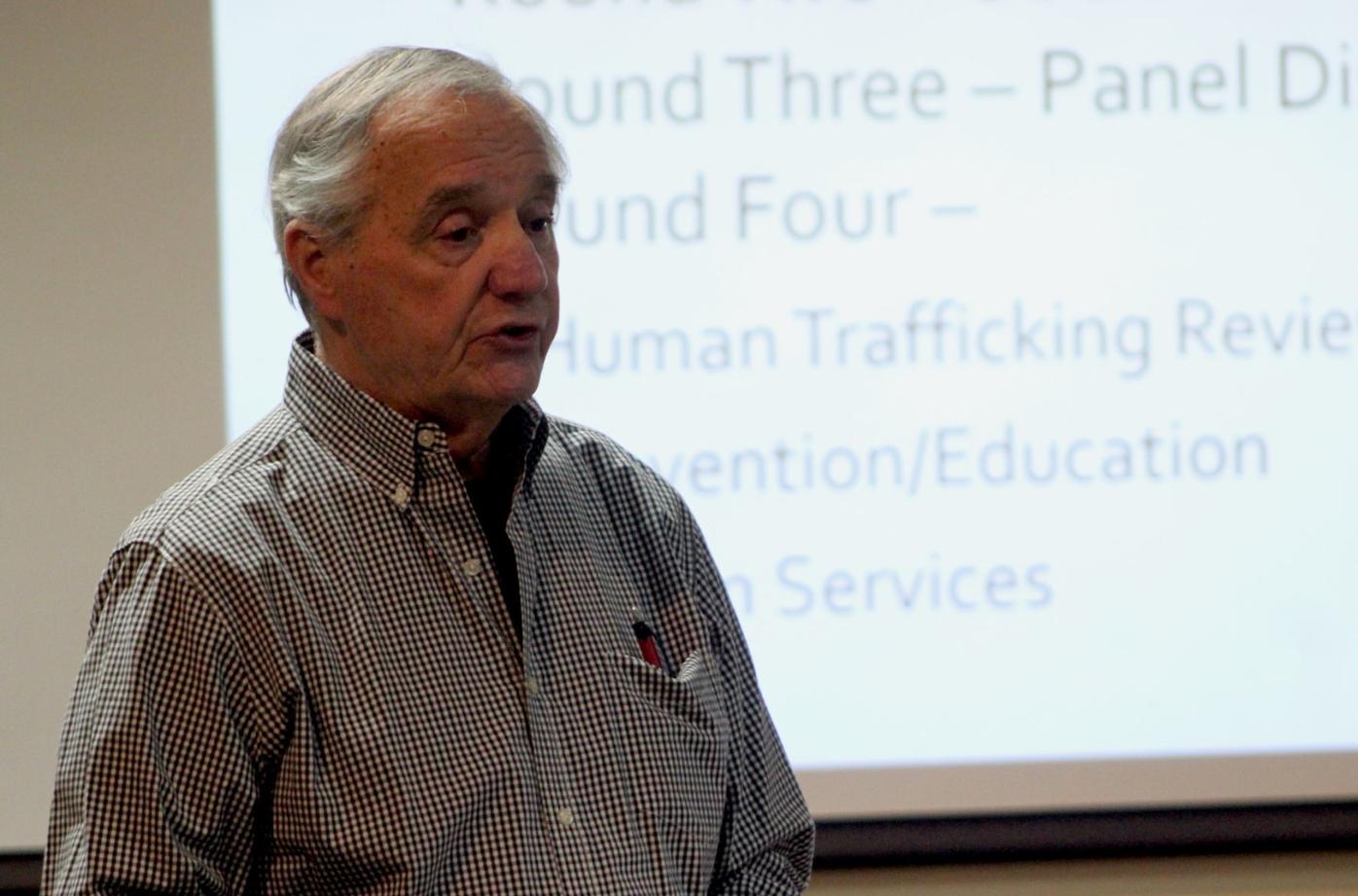 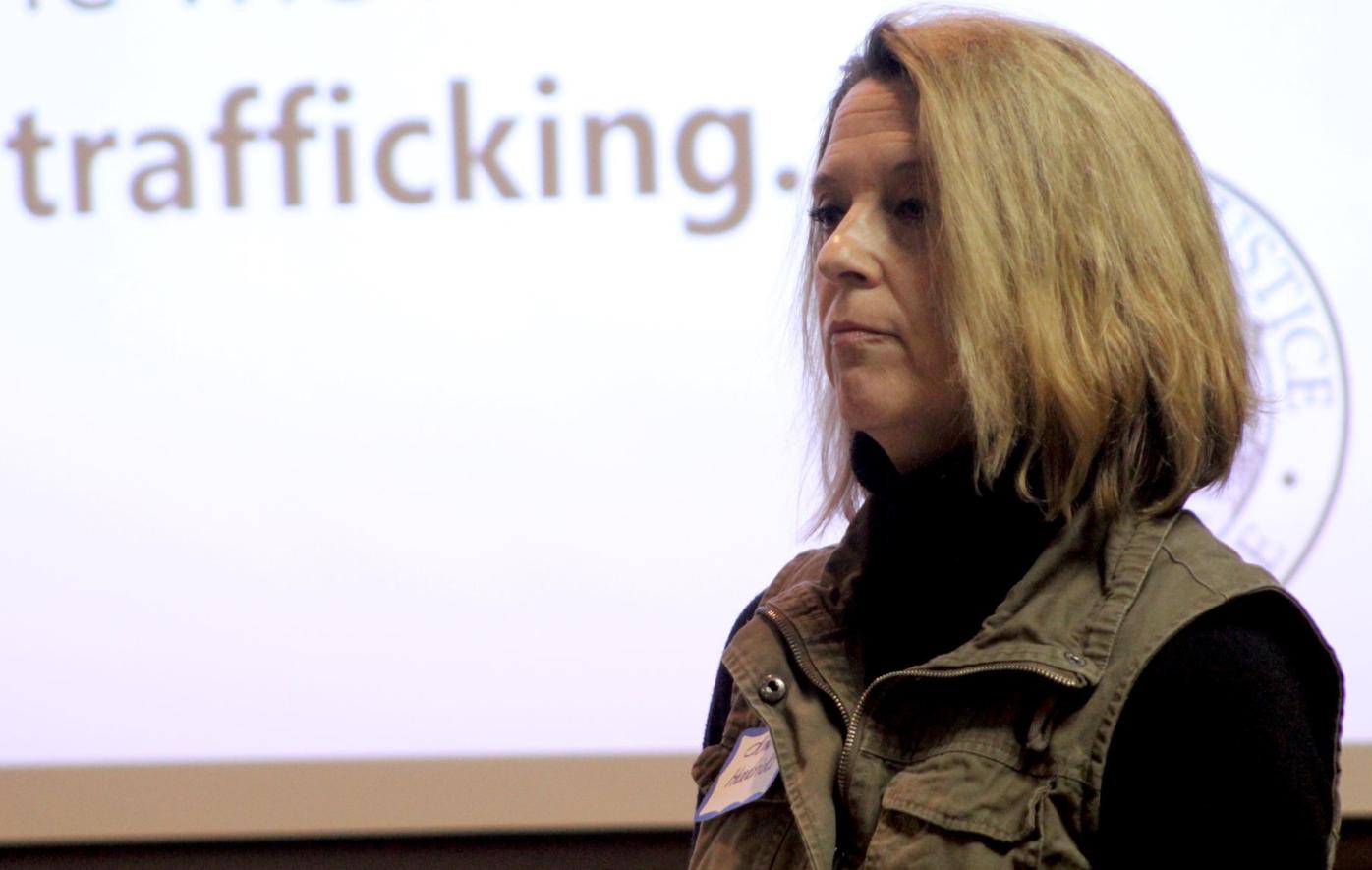 Kim Hendricks, ambassador for the Prevention Project, tells her story of how her family was affected by human trafficking. 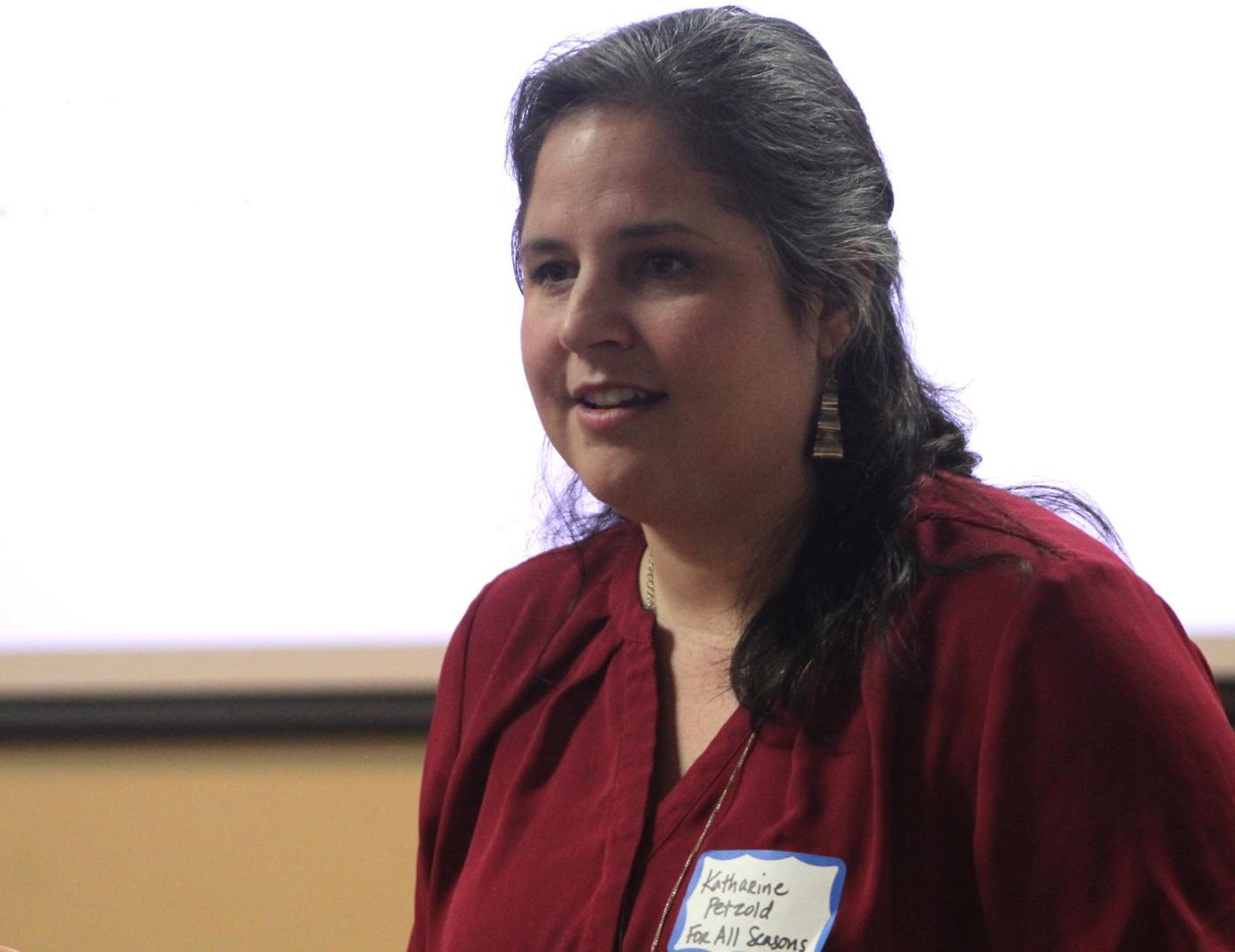 Katharine Petzold, the Anti-Human Trafficking program coordinator at For All Seasons Behavioral Health and Rape Crisis Center, explains the role her organization plays in assisting victim of trafficking.

Ed Thomas, co-chairman of the Eastern Shore Human Trafficking Task Force, discusses the process of human trafficking during a presentation at the Kent Island Library.

Kim Hendricks, ambassador for the Prevention Project, tells her story of how her family was affected by human trafficking.

Katharine Petzold, the Anti-Human Trafficking program coordinator at For All Seasons Behavioral Health and Rape Crisis Center, explains the role her organization plays in assisting victim of trafficking.

STEVENSVILLE — The Queen Anne’s County Free Library branch on Kent Island hosted a meeting Friday, Jan 11, to discuss the signs, reasons behind and efforts to stop human trafficking on the Eastern Shore.

Ed Thomas, co-chairman of the Eastern Shore Human Trafficking Task Force, was joined by Katharine Petzold, the Anti-Human Trafficking program coordinator at For All Seasons Behavioral Health and Rape Crisis Center, and Kim and Kevin Hendricks, ambassadors for the Prevention Project.

The presentation, sponsored by Aglow International, Stevensville Lighthouse and For All Seasons, outlined the reality and lucrative nature of what Thomas said criminals regard as a “low risk, high reward” crime.

“Victims are girls and young women, but increasingly they are also young boys,” said Thomas. “They are not always from poor and impoverished backgrounds, and victims can come from the middle class or wealthy families. The three words that lead to this crime are greed, indifference and fear. This is a big industry, and the target is kids.”

Data collected by the task force indicates that human trafficking has now become a $9.5 billion a year industry. That makes it the second-highest criminal enterprise on record and includes not just sex trafficking, but also labor trafficking.

An estimated 22,000 victims were trafficked in Maryland just last year.

With human trafficking in every state in the union, the Eastern Shore is not exempt from many of the ways that the victims get to “buyers,” with truck stops being just one of the prevalent locations where they are left.

Research by the task force also contradicts the notion that the majority of the victims are immigrants as the largest percentage of victims are U.S. citizens. According to Thomas, even the traffickers themselves do not fit a certain profile as men and women of all nationalities and ethnicities have been indicted on such charges.

“In the fall of 2013, our child had just turned 17 years old, and we became aware that the worship pastor had been grooming our daughter,” said Kim Hendricks. “We were part of a very large church in Salisbury, and our daughter had a passion for God. This man used his authority over her to gain her trust and take advantage of her willingness to serve the Lord.”

Hendricks said, through the work of local law enforcement and the court system, the perpetrator was caught. The lessons learned through the ordeal led the family to educate the public about methods used by traffickers.

That led to establishing a Prevention Project curriculum that is used to teach students and other groups the realities of modern human trafficking.

The Eastern Shore is an attractive location for human trafficking for a myriad of reasons.

Aside from the Shore’s location on a busy East Coast corridor and many nearby metropolitan areas, major highways like I-95, Routes 40, 50, 301 and 13 all make transporting victims and meeting buyers easy. The increased number of rest stops and the amount of sporting events, casinos, conventions and recreational areas all contribute to an increased likelihood of human trafficking.

The presence of drug use, poverty and the need for seasonal workers all add to why trafficking is possible on the Eastern Shore. Perhaps the most disturbing reason why it occurs, according to the presenters, is the lack of knowledge on the topic and failure to notice the signs once someone is being “groomed” by a trafficker.

They include: withdrawing from family, school or church; dressing differently; signs of physical abuse; appearing consistently tired; acting as if they are under another’s control; and getting new or unexplained tattoos, such as bar codes.

Even to their peers, victims may appear to withdraw from family or activities, mention an older boyfriend that provides them with extravagant gifts, and they may even start wearing gang-affiliated clothes.

“Our victim advocacy allows our advocates to follow victims through the court system with case managers,” said Petzold. “Many of programs are therapy-based and we can refer them to other resources they might need. We provide hospital accompaniment around the clock, seven day a week. That’s because that’s where many come in and we see them for the first time.”

Local and state law enforcement have joined federal law enforcement in cracking down on sex and labor trafficking in the state and on the Eastern Shore. Traffickers use blackmail, withholding necessary legal documents, and threat of physical violence to the victim or their friends and family as a means of control. These methods eventually lead to recruiting the friends of the victim.

In response, the state’s and nation’s attorney generals have joined U.S. Immigration and Customs Enforcement, the Department of Homeland Security, and numerous human trafficking task forces to refine investigation methods and find the best way to have victims contact the authorities.

He noted “as a nation, we cherish and uphold the notion that all people are created with inherent dignity and entitled to life, liberty, and the pursuit of happiness. Human trafficking and enslavement robs victims of these God-given endowments.”

Resources include the National Human Trafficking Resource Center Hotline at 1-888-373-7888, which is staffed by representatives 24 hours a day and can accommodate over 170 languages. Victims and those who suspect human trafficking is occurring are encouraged to call the hotline to better protect the victim from potential retribution by their handlers.