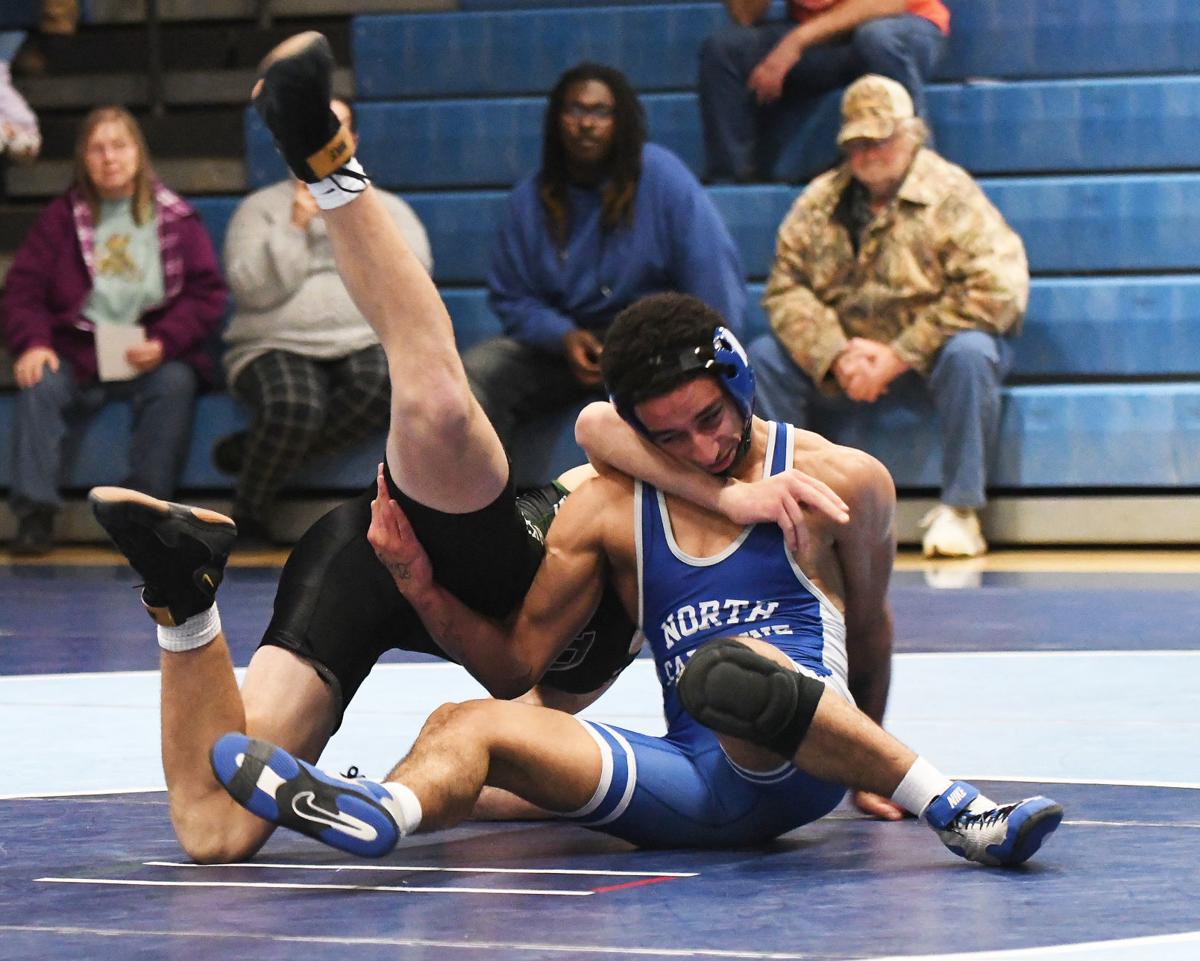 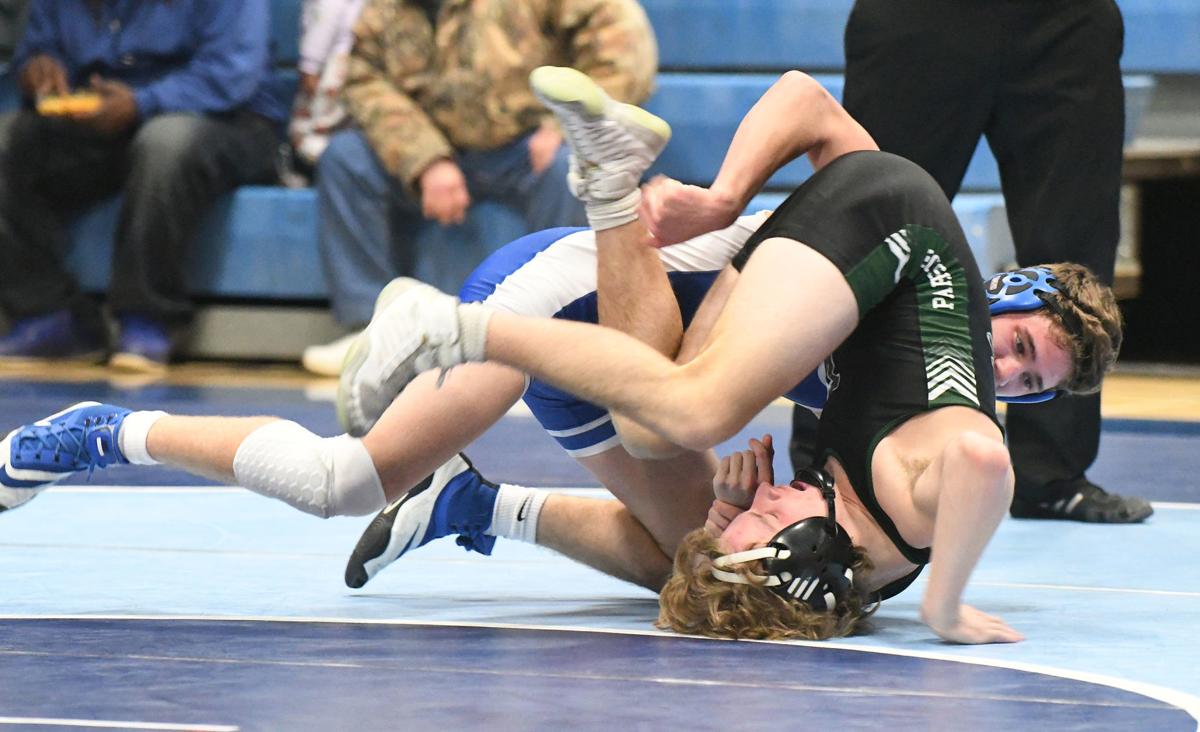 North Caroline High’s Reilly McIntyre flips Parkside’s Chris Bouchelle to his back in the 132-pound bout Friday evening. McIntyre earned a 15-0 technical fall with 1:21 left in the third period. 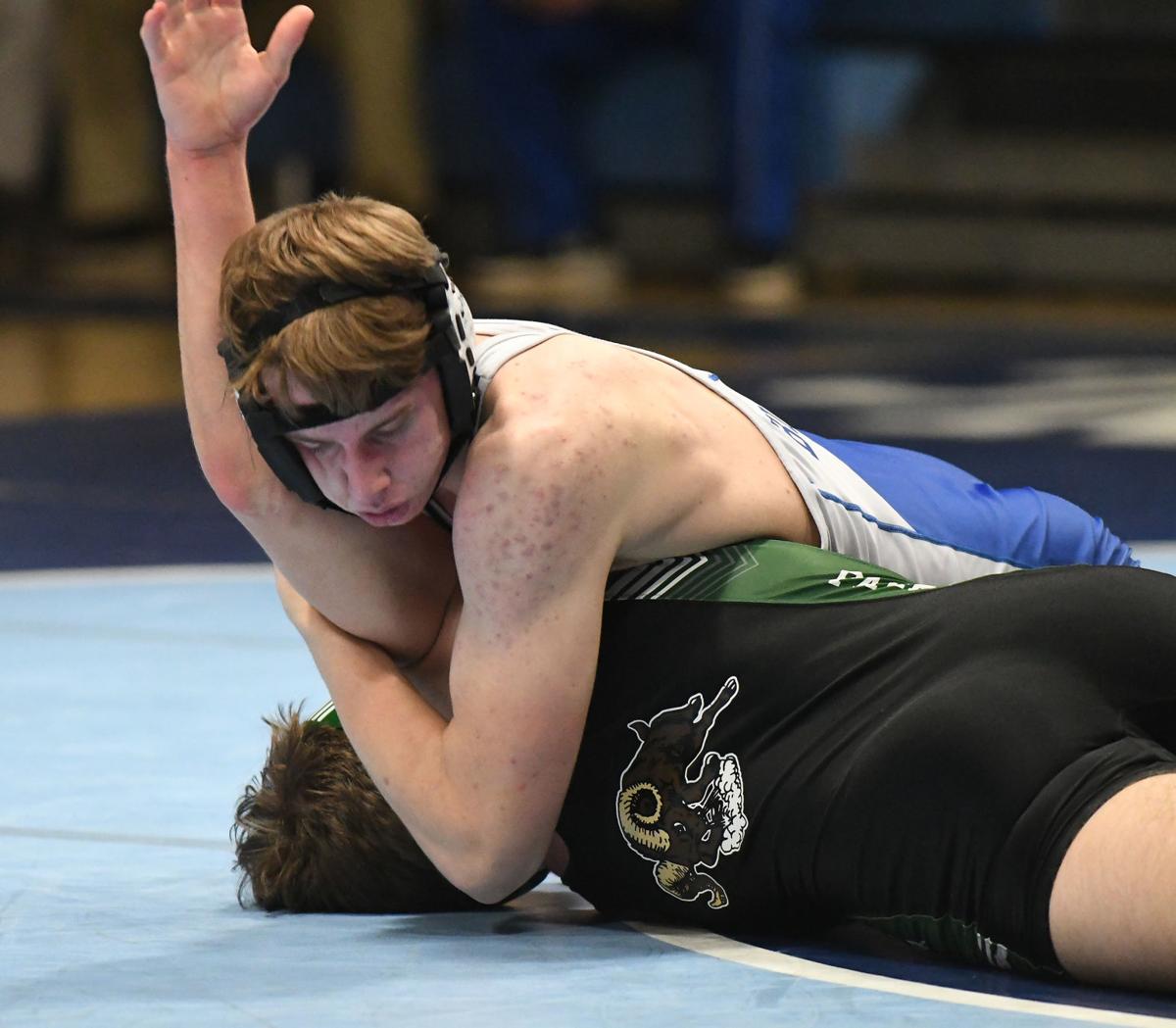 Parkside High’s David Sprull earns back points against North Caroline’s Sean Bunce in the first period of their 106-pound bout Friday evening. Bunce fought off the pin attempt and rallied for a 15-9 decision. 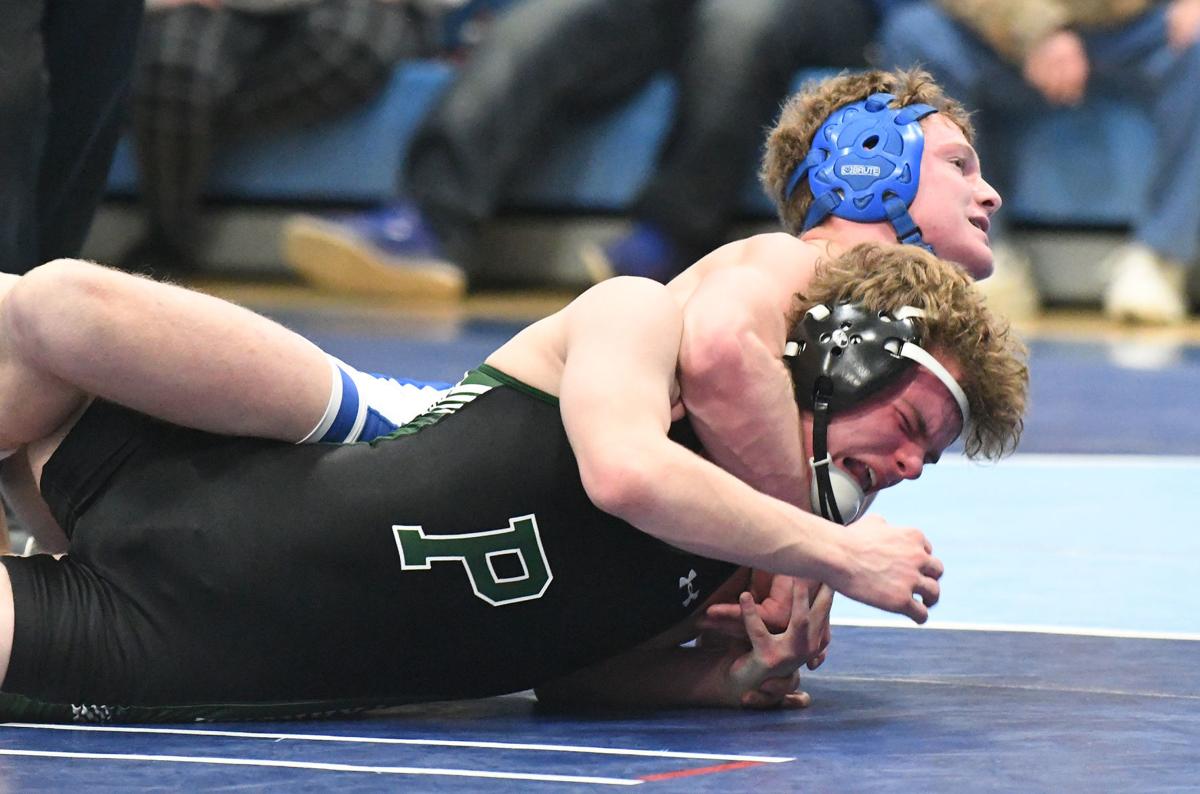 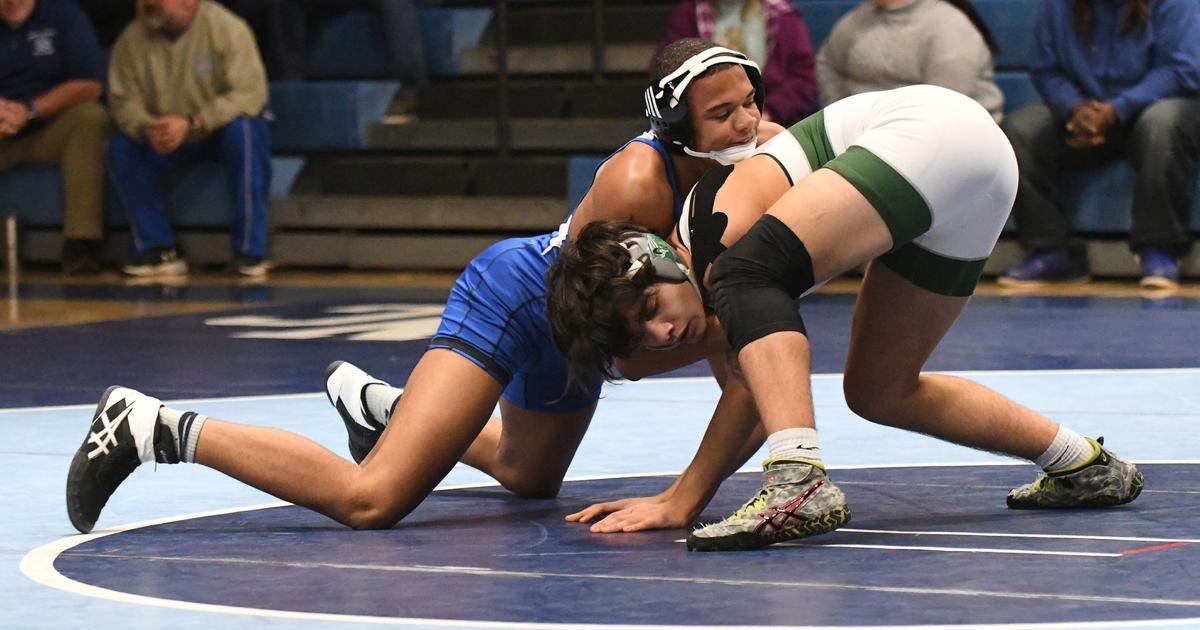 North Caroline High’s Reilly McIntyre flips Parkside’s Chris Bouchelle to his back in the 132-pound bout Friday evening. McIntyre earned a 15-0 technical fall with 1:21 left in the third period.

Parkside High’s David Sprull earns back points against North Caroline’s Sean Bunce in the first period of their 106-pound bout Friday evening. Bunce fought off the pin attempt and rallied for a 15-9 decision.

RIDGELY — Both teams knew this would be close, probably would come down to bonus points, and they were right.

The Rams produced the most bonus points and won the match on the last bout of the evening.

Parkside High’s Anthony Betts fought off a valiant effort by North Caroline’s Devaughn Baker to score a 14-3 major decision as the Rams earned a 37-30 victory Friday evening at the Dawg Pound.

Both teams won seven bouts but the Rams scored the most points, benefiting from five pinfalls, to win the points battle and to improve their record to 8-1.

Betts scored a takedown 26 seconds into the first period and led the entire 160-pound bout against Baker. But Baker scored a reversal in the third period and Betts nearly pinned himself in the furious action, which would have given the Bulldogs the team win.

“To be honest with you, you’re never confident coming in when you’re wresting North Caroline,” Cashman said. “That’s a credit to them because their kids always fight. They’re just tough hard-nosed kids. I knew we had a chance to win probably about eight matches, but again you just never know what’s going to happen.”

“It was an exciting one,” said Bulldogs head coach Tim Frey, his team now 7-2. “We knew the match was going to be close. Looking at the matchups and everything, it was going to come down to bonus points. … They just got more bonus points than we did. They got pins where we got wins.”

Parkside opened the match with a pinfall by Eli Sellinger in 2:31 over Dakota Wilson in the 170-pound bout. North Caroline worked pins in the next two bouts to take a 12-6 lead. At 182 pounds, Louis Stutzman decked George Sotack in 2:33, and at 195 Trenton Hillard floored Robert Duong in 1:30. Duong spun around Hillard to score a takedown 30 seconds into their bout, but Hillard reversed at 1:18 and turned Duong to his back for the pin.

The Rams countered with consecutive pins and led the rest of the match. Alijah Bivans pinned Chris Clarke at 220 in 1:46. It took longer, but Mike Collins decked Nick Belay in 4:26 to win at 285, putting Parkside ahead 18-12.

Parkside almost made it three pins in a row, but North Caroline’s Sean Bunce fought off a near pin in the first period against David Sprull and rallied for a 15-9 decision at 106. Cashman credited Sprull for limiting North Caroline to just three team points from the bout.

“There wasn’t really one specific match that won it for us,” Cashman said. “To be honest with you I think 106 was huge for us, saving bonus points, because that was a jayvee kid that we put out there. Our regular varsity starter has the flu, and he (Sprull) went out and battled with this kid. Could have pinned him, but you know.”

North Caroline was missing its starter at 120 pounds.

The Rams then collected 12 points with pinfalls by Jordan Rinaldi at 113 and by Radon Fuller at 120 to lead 30-15. Devin Webb added three more points with a 2-0 decision over Gus Clark at 126.

North Caroline won the next four bouts but didn’t produce any pins as the Rams held the lead at 33-30 heading into the final bout. Reilly McIntyre (132) scored a 15-0 technical fall over Chris Bouchelle; TJ Bunce (138) rallied for a 13-8 overtime victory over Matt Lewis; Rhian Silsley (145) earned an 11-2 major decision over Caleb Thamert; and Shane Warren (152) produced a 4-2 win over Cameron Mahle.

Baker then put forth an impressive effort in the final bout against the more experienced Betts.

“You just never know,” Cashman said. “I’ve been coaching for 24 years and I’ve seen some crazy things happen. You just never want to take anything for granted.”

“That’s a first-year wrestler,” Frey said of Baker. “He’s only wrestled three varsity matches. It was a good match. It was fun. The crowd enjoyed it.”