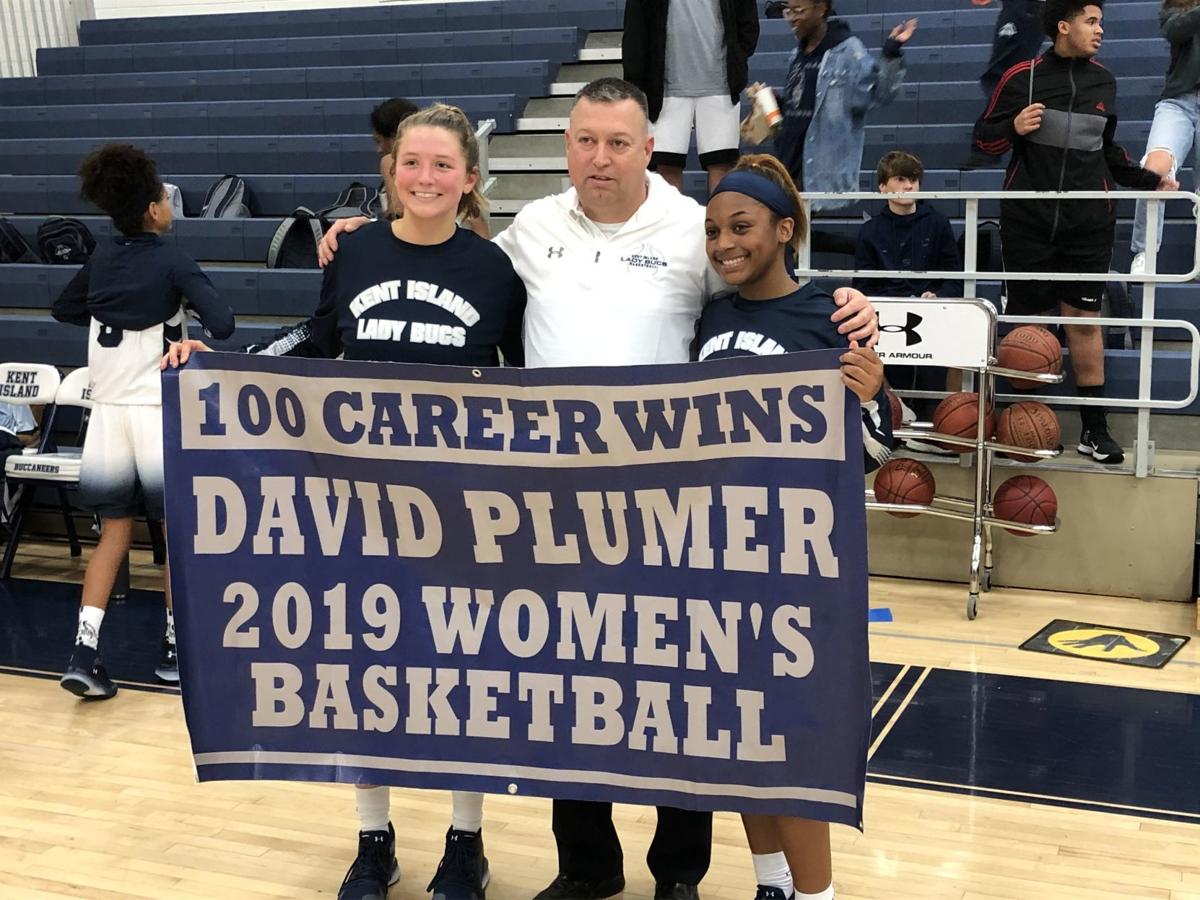 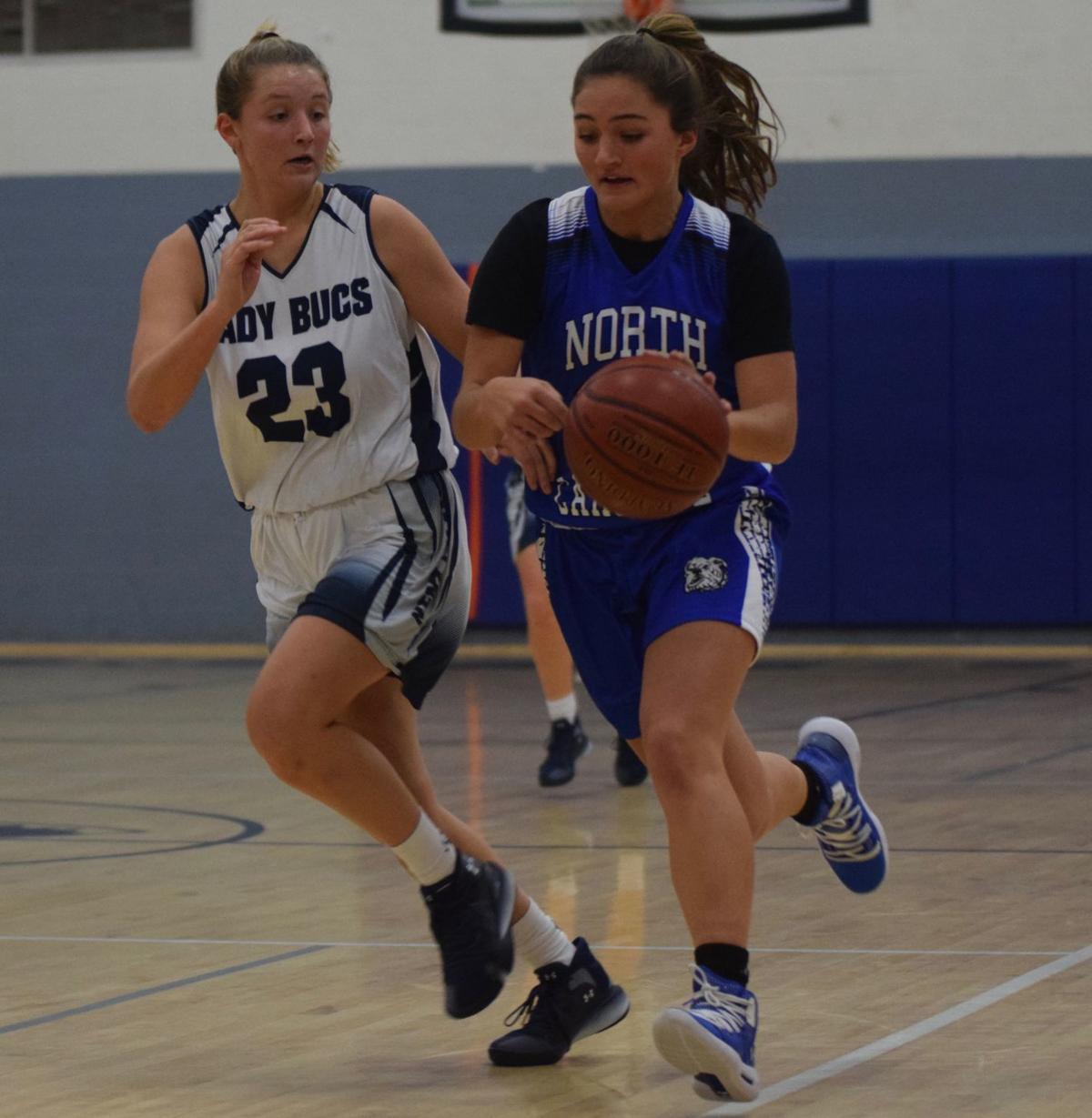 Upon conclusion of the postgame handshakes, the public address announcer alerted the arena of the milestone and congratulated Plumer. Kent Island’s senior captains Blair Goodrich and Eria Clark unfurled a banner commemorating the achievement, and the three posed for a picture followed by a full team picture.

Plumer didn’t want to bask in the accomplishment, instead credited the players that helped him get there. He wanted to reach it so he could move on from it.

“We wanted to do it down at (Stephen) Decatur,” Plumer said. “I wanted to get it over with because people ask about it, and I don’t want that to be a focal point of the season.”

Goodrich didn’t know about the banner until it was in her hands, but she appreciated the moment.

“He’s been my coach forever, since rec ball,” Goodrich said. “So I’m proud to be a part of that.”

The Buccaneers’ swarming press defense caused North Caroline a lot of problems. Kent Island built its lead largely on points off turnovers created by the pressure. Bulldogs head coach Mark Potter accepted responsibility for his team’s lack of execution in breaking the press.

Even with the senior leadership, Kent Island is a young team — the Buccaneers start two freshmen and one sophomore. Plumer knows there will be some bumps with a less experienced squad, but knows he has talent.

“We don’t have a lot of experience playing minutes. That doesn’t mean they’re not good,” Plumer said. “So we’ve got some ballplayers that are coming up that are certainly impacting.

So it’s good to be young, but they make mistakes. They make lots of mistakes. So they’ve got a lot of work to do to get to the level of play to go to Towson (host of the state championships). It’s just that simple. But we’ll ride them. Everybody’s going to have to contribute.”

Potter and the Bulldogs were less than pleased with the game’s officiating. North Caroline was hit with two technical fouls – the second of which left Potter demanding an explanation from the official, who eventually, reluctantly, obliged.

Potter was clear the officiating didn’t cost North Caroline the game, but was still unhappy after the game.

The Bulldogs are back in action Thursday against Kent County. The Buccaneers face St. Michaels on Thursday.

SHILOH — Emily Griffith scored 20 points and Myia Jeter had 18 — a season-high for each — as the Warriors rolled in their North Bayside opener.

Abby Farr finished with 14 points for Easton (3-0, 1-0), which travels to Queen Anne’s on Thursday for a pivotal division clash. Rachel Lapp had 11 points and freshman Anissa Wallace finished with 10 points.

WORTON — Claudia Leshinskie had a team-high 15 points and Kendal Moxey delivered a double-double with 11 points and 10 rebounds to lead the Lions.

CRISFIELD — Kenya Jones scored 28 points as the Vikings evened their record at 1-1.

AMERICAN CORNER — Dalasia Wise had 16 points and Megan Stubbs scored 15 to lead the Colonels to their second straight win.

The April issue of the magazine celebrates the environment. April 22 marks the 50th annivers…

In this issue: A young Marine found a way to merge her passion with her career and more!