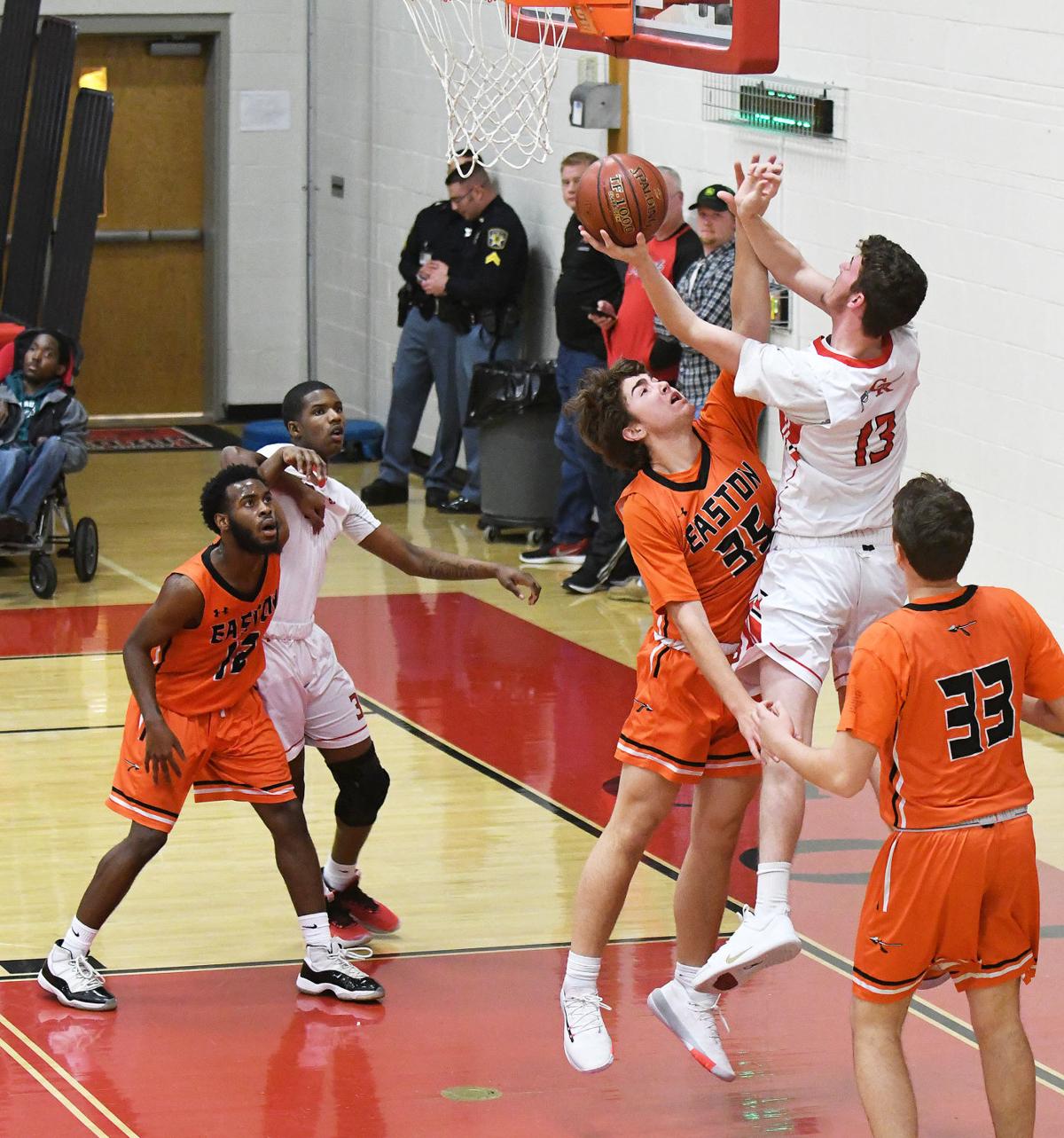 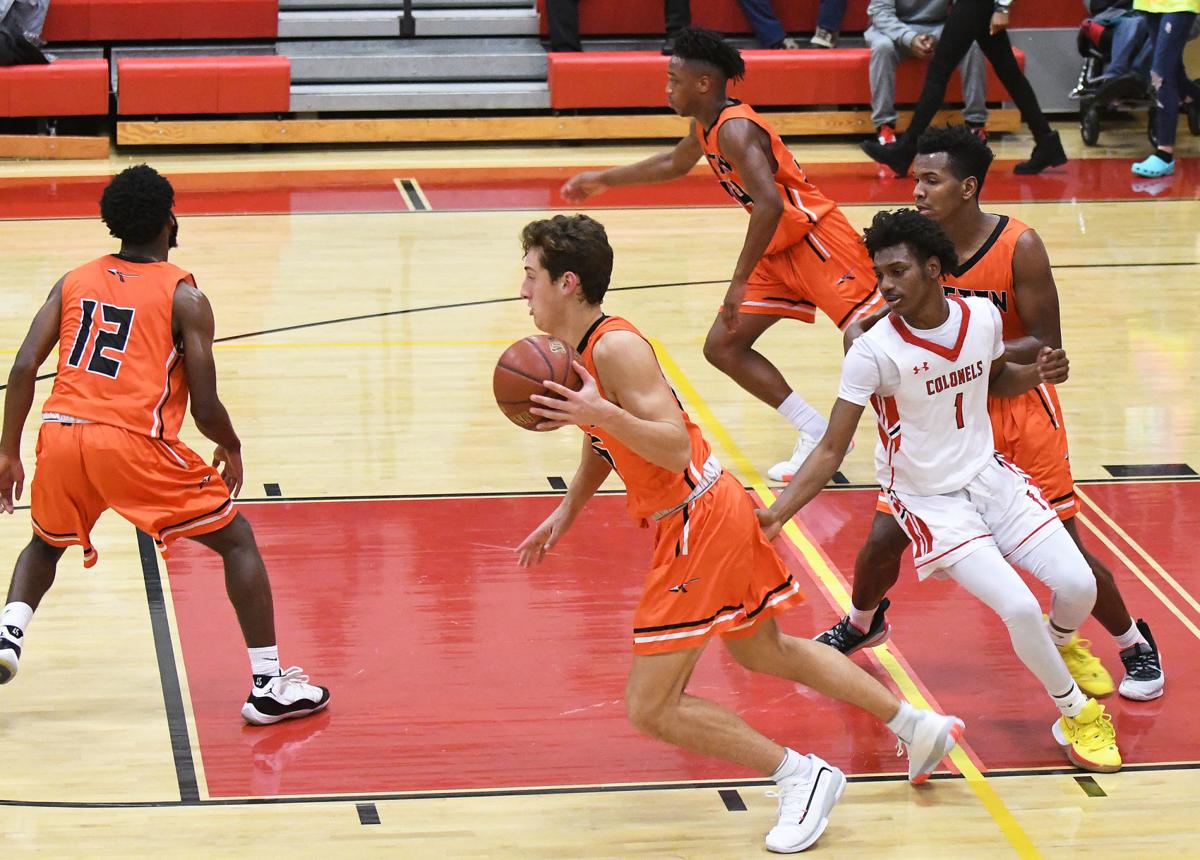 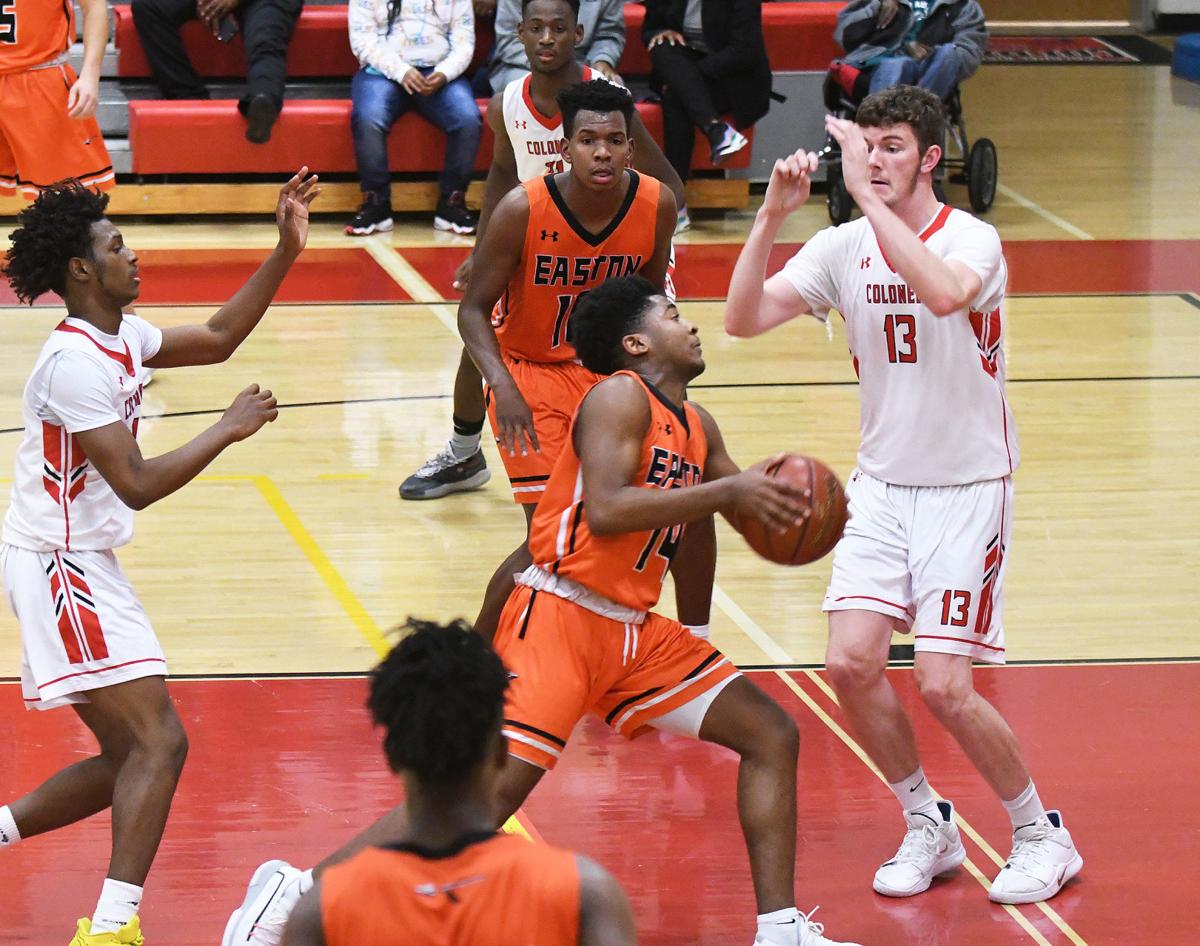 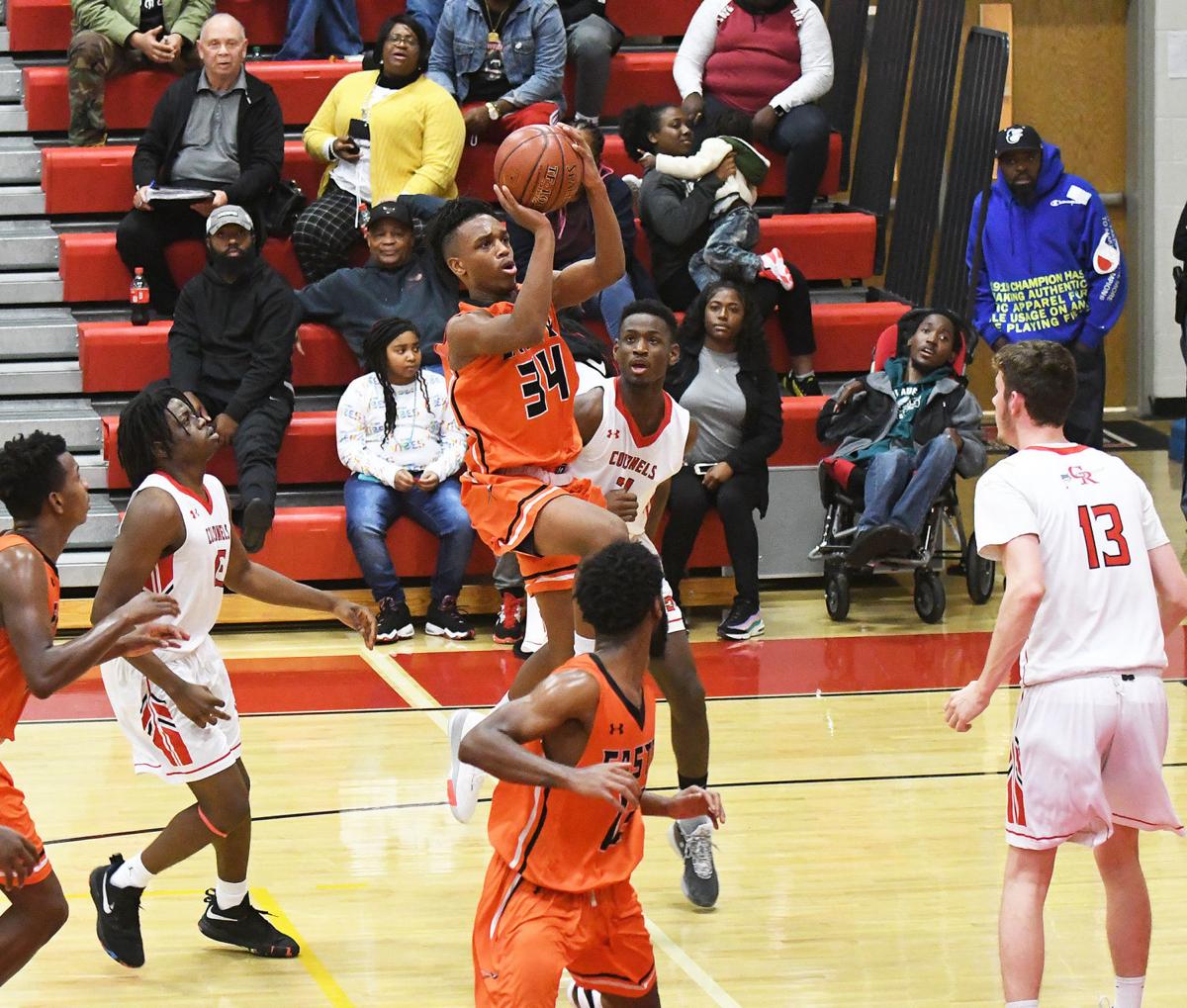 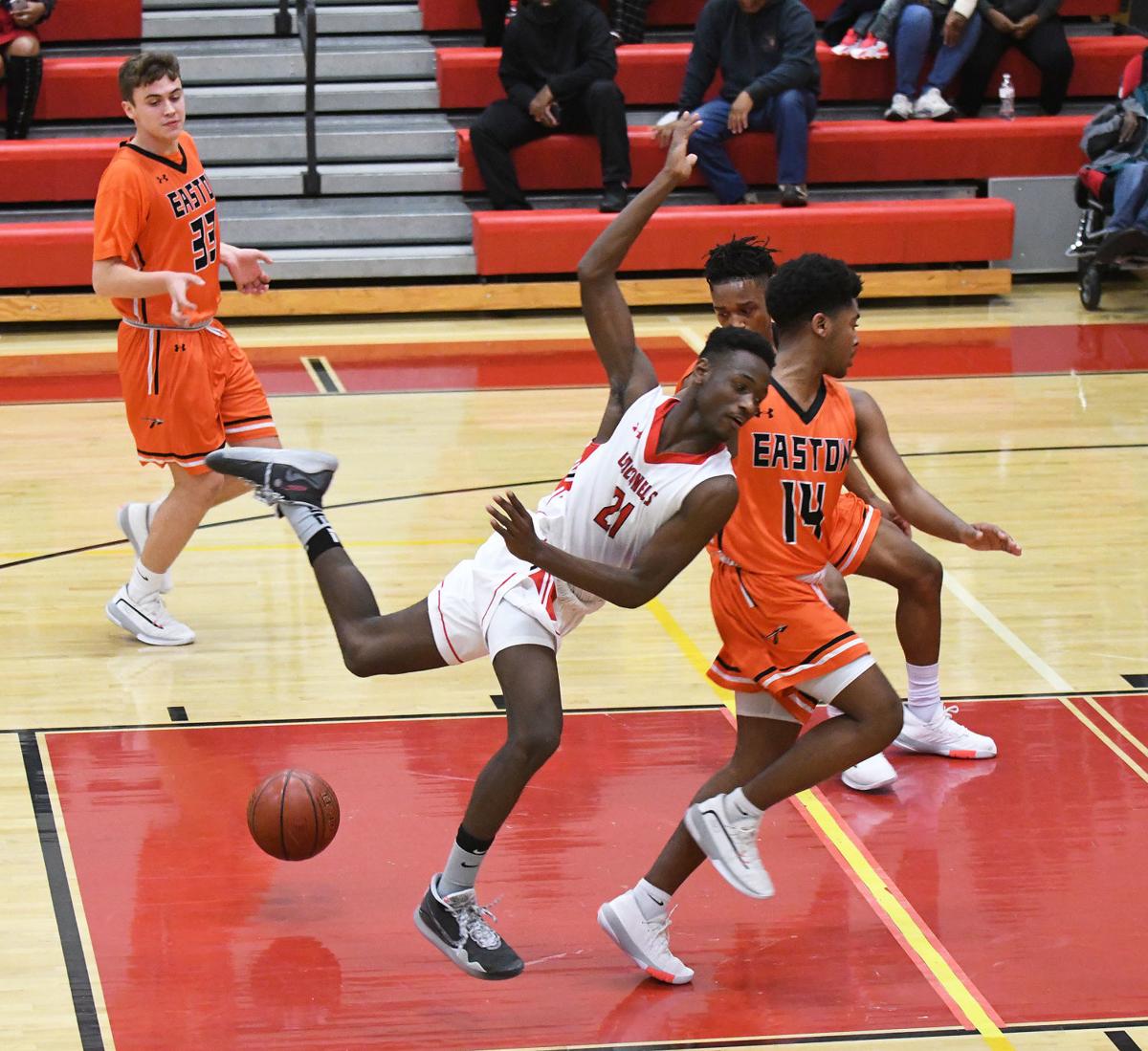 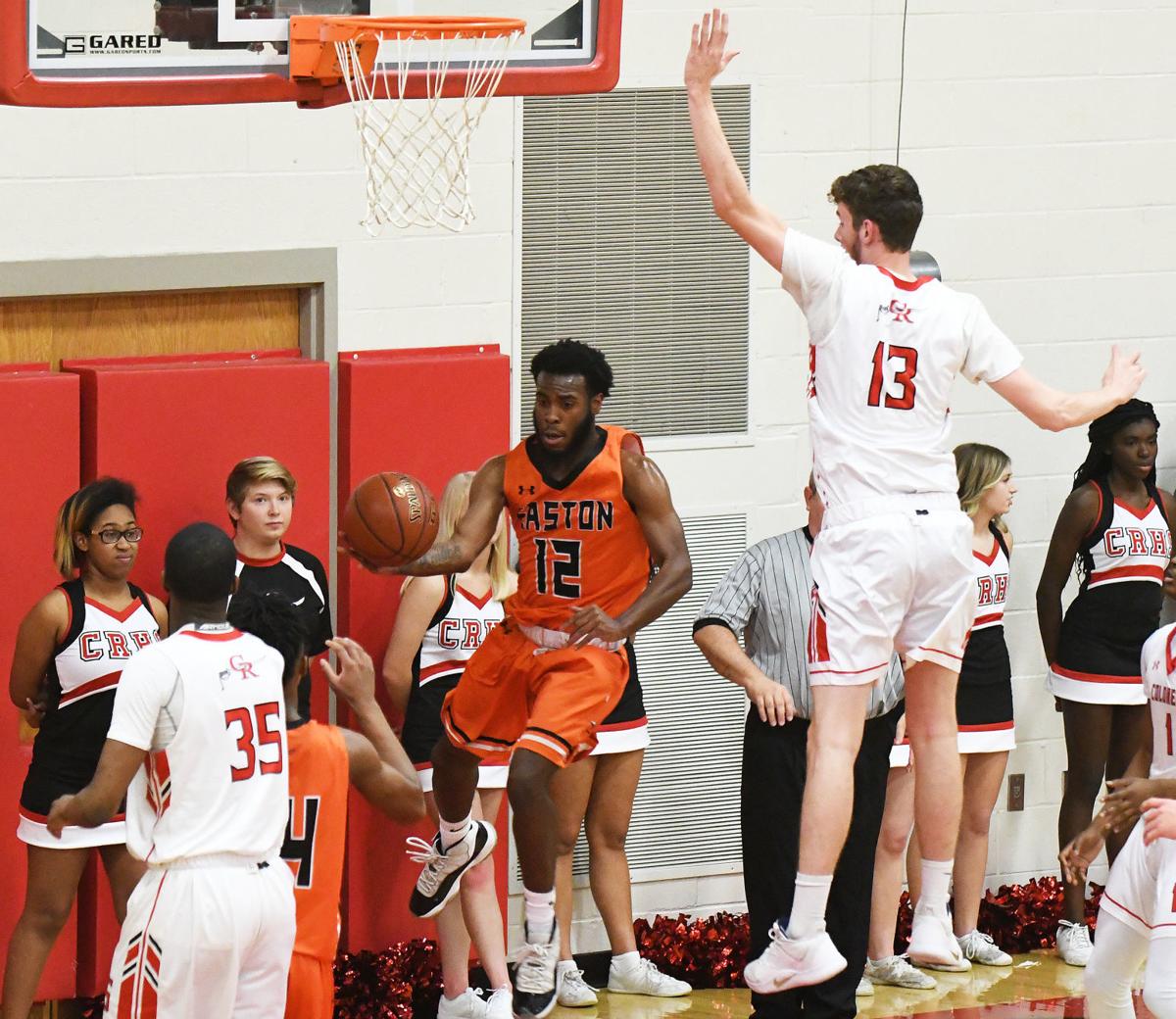 AMERICAN CORNER — Outplayed in the first quarter and out-rebounded throughout the first half, Easton High’s boys’ basketball team switched defenses and switched the momentum Thursday evening at Colonel Richardson High.

Creating turnovers and transition baskets out of their 2-3 zone, the Warriors took control in the third quarter on their way to a 53-41 victory.

Shawn Warner (game-high 20 points) and Ryan O’Connor each drained four 3-pointers as the Warriors scored both inside and out. Easton (4-3 overall, 3-2 North Bayside) put together a 15-0 run beginning with 5 minutes, 50 seconds remaining in the third quarter and led the rest of the way.

“A big game from Shawn and Ryan,” Warriors head coach Dionte Hynson said. “Shawn’s been playing great; Ryan’s been playing real good, too. It was a very good game for us as far as defense, the second half anyway. The first half we was a little sloppy on defense. We just had to regroup at halftime and get things straight, plus they were killing us on the boards too, especially the first half.

“When we went to the 2-3 zone, I think that helped us out a lot,” Hynson added. “When we got the rebound we could get out and run. We could play the gaps and it helped us on the rebounding.”

The Warriors were coming off a pair of losses at the Governors Challenge holiday tournament in Salisbury.

“I think the tournament really got us focused on defense,” Warner said. “It was a lot of good competition out there. In the second half we just kept doing what we were doing in the first half, playing good defense, make our shots, and try to win this game.”

Colonel Richardson (3-3, 2-2) was coming off its first bracket championship at the Governors Challenge with wins over Ben Franklin (Baltimore) and Ballou (Washington, D.C.).

Against Easton, Diante Dickerson led Colonel with 17 points. After a 16-point first quarter by the Colonels, they struggled putting the ball through the hoop, scoring just six points in the second quarter and eight in the fourth.

After Easton went ahead 28-24 to begin the third quarter, Dickerson hit a pair of free throws and tallied with a fast-break lay-in, after grabbing a defensive rebound, to tie the game at 28 with 6 minutes left in the quarter. But the Colonels didn’t score again until 1:34 remained in the third, after Easton had built a commanding 43-28 lead.

O’Connor pumped in a trey from inside the right baseline to put the Warriors ahead 31-28 at 5:50 in the third. After missed opportunities by both teams, Dionte Hynson II scored with a drive up the right side of the lane to make it 33-28. He crossed the lane and hit a layup at 3:14 for a 35-28 Warriors lead. Nyzhier Youmens scored off a Colonel turnover to make it 37-28. Seconds after a Colonel timeout, Da’Qwan Johnson stole the ball and scored. A free throw by Hynson made it 40-28. O’Connor capped the run with an open-look 3-pointer from the top of the arc after a feed from Hynson.

Easton led 43-33 at the end of the third quarter and added two points to its lead in the fourth.

Colonel had opened the game with a 6-0 run. Dickerson, Rakai Jones, and Elijah Stull each drove for lay-ins, but the Warriors countered with long-range accuracy. Warner hit an NBA-range trey to pull Easton within 10-9 with 2:34 left in the first quarter and, after a six-point run by the Colonels, he ended the half with a step-back trey from well beyond the arc.

“I think we played really well today as a team. A lot of people showed up today. That had a big impact on our win today,” Warner said. “I liked how my teammates were getting me involved with a lot of scoring tonight. I had a good night shooting, so I just kept letting it fly. If it was going off, it was going off; if it was going in, it was going in.”

Easton next hosts Kent Island on Tuesday. The Colonels travel to Cambridge-South Dorchester.