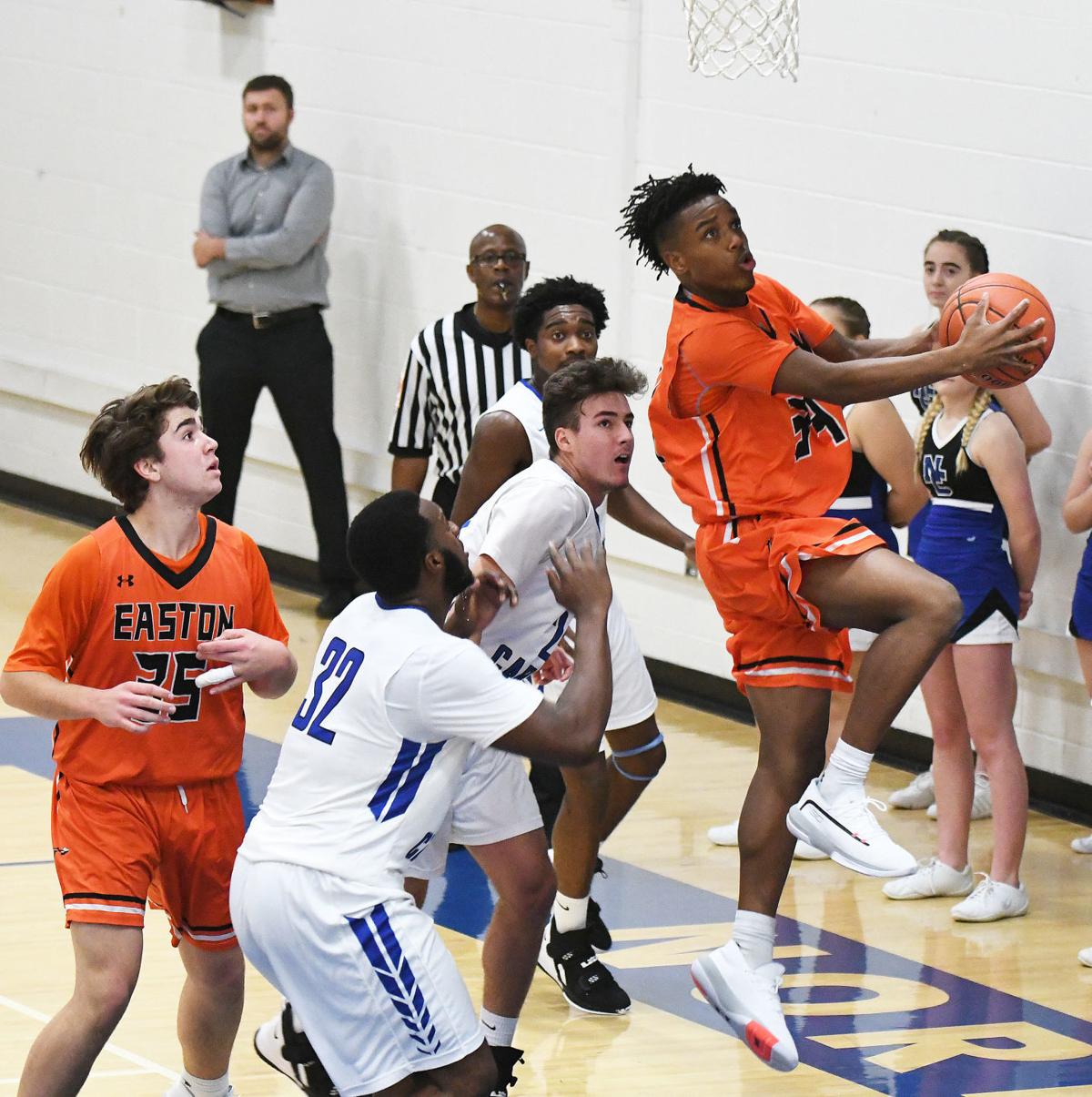 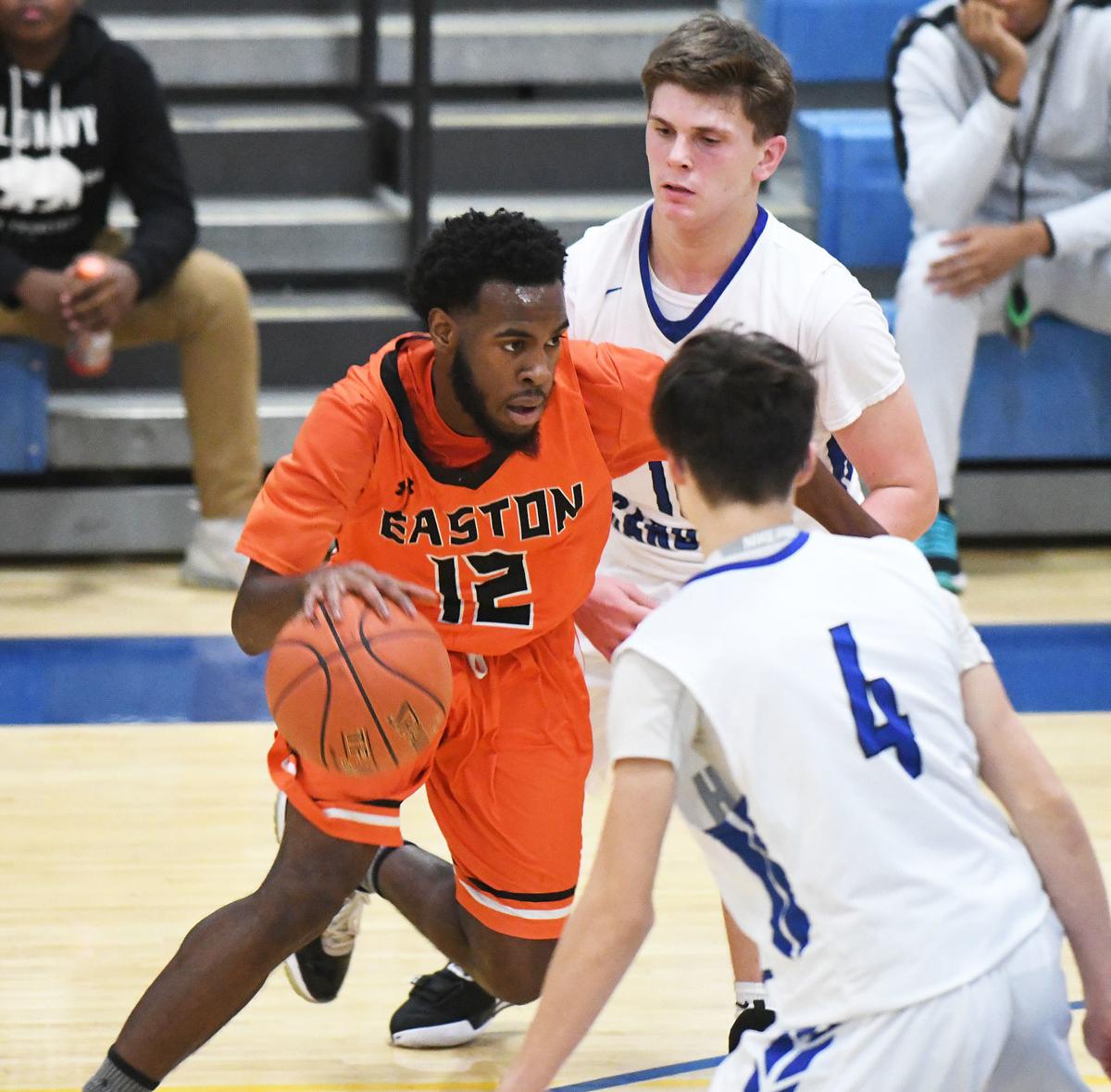 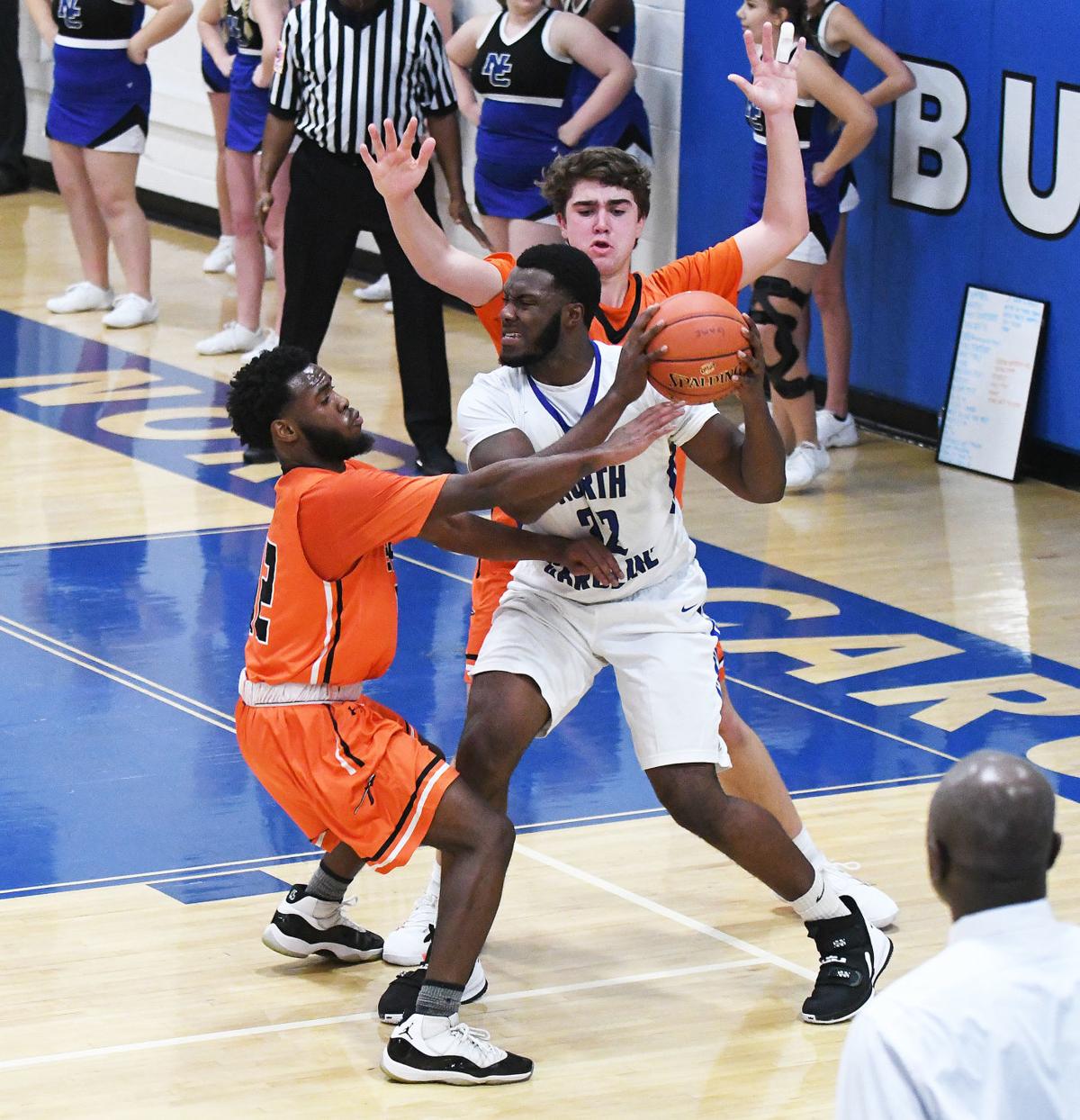 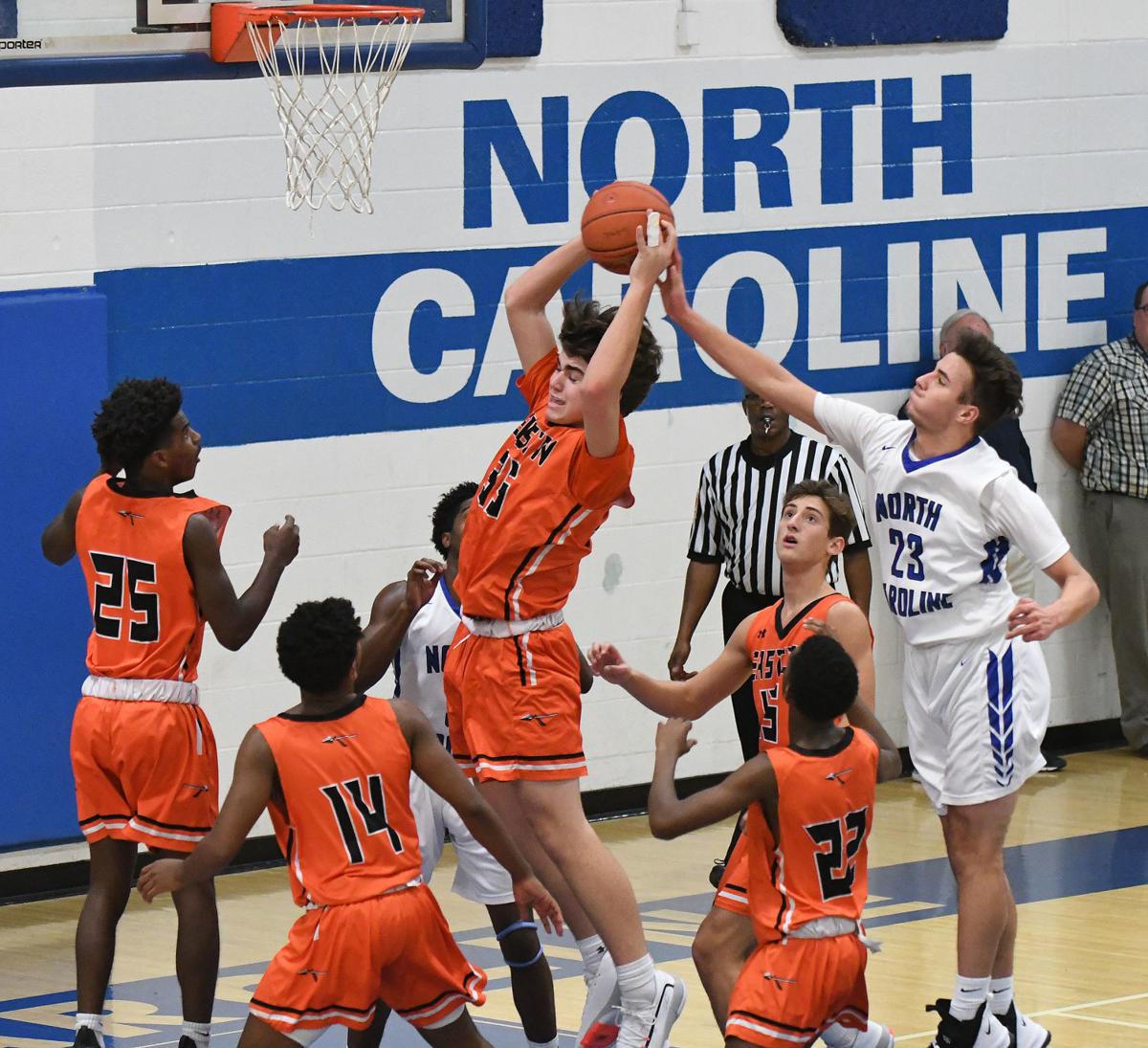 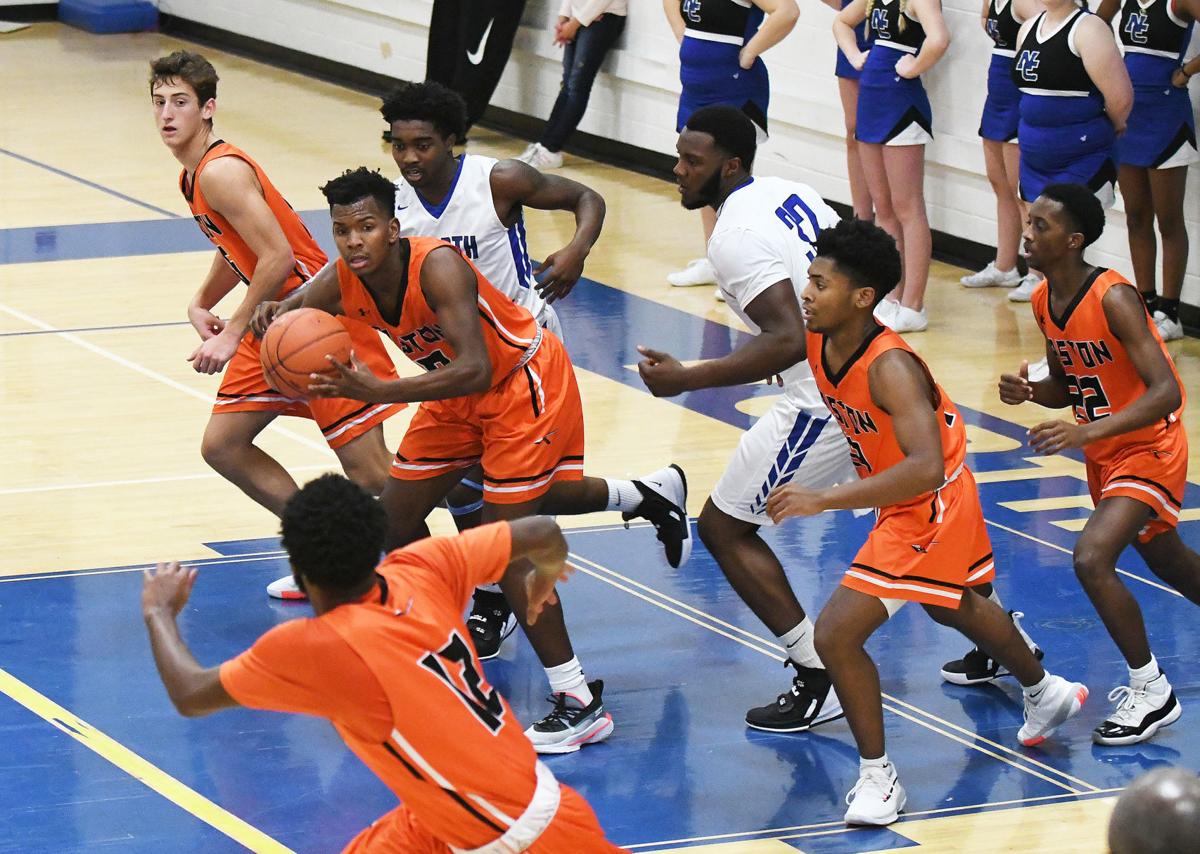 RIDGELY — The Warriors didn’t shy away from scoring in the second half Tuesday evening at North Caroline High.

Shawn Warner hit from long range and Max Vener scored inside the paint as Easton High’s boys’ basketball team rallied for a 67-59 victory over the Bulldogs.

Nyzhier Youmens (team-high 17 points) and Dionte Hynson II (14 points) also produced plenty of scoring for Easton, and Ryan O’Connor and Ja’avier Pierce each chipped in with a 3-pointer as the Warriors rebounded from a 29-25 halftime deficit.

Jason Brown led the Bulldogs with a game-high 25 points, including nine out of 11 free throws. Vidal Bonds and Kendron Wayman each pumped in 14 points.

North Caroline’s last lead, 46-45, came 15 seconds into the fourth quarter when Bonds scored with a baseline lay-in off a feed from Ethan Dvorak. Pierce responded with his trey 15 seconds later to begin a 9-2 Easton run.

Youmens stole the ball, was fouled, and hit a free throw to put Easton up 49-46. After some loose play, Wayman tallied inside off a pass from Brown to make it 49-48. Youmens then drained a 3-pointer off the glass to put Easton ahead 52-48 with 5:25 remaining, and Hynson hit a pair of free throws after he was fouled driving to the bucket in transition to make it 54-48. Dvorak fouled out on the play, limiting the Bulldogs to seven players.

Wayman scored again off a feed from Brown to cut Easton’s lead to 54-51 with 3:25 to go. But Easton countered with eight straight points to take control, six coming on 3-pointers by Warner. Vener added a transition lay-in between Warner’s long-range buckets.

Easton (2-3 overall, 1-2 North Bayside) closed the game at the free-throw line with Youmens hitting 3 of 4 and Hynson sinking 5 of 6.

“A great team effort today,” Warriors head coach Dionte Hynson said. “I thought we played well. As a team we played good solid defense and tonight we were actually shooting the ball. We weren’t scared like the other night against Queen Anne’s. I think we were more aggressive tonight. We played solid team ball. We tried to advance the ball a lot too this time. We tried to get some easy points. But I thought as a team as a whole we played well.”

Vener scored all 10 of his points in the second half, eight in the third quarter.

Vener and Da’Qwan Johnson led the Warriors’ defensive effort against Wayman inside the lane, and North Caroline, which was missing two starters, was limited in their transition buckets.

“Da’Qwan and Max Vener, they played well on him,” Coach Hynson said. “We was trying to front him and make them throw it over the top. We had some backside help, but I think they played well against him. He’s a force down there.”

Easton closed the first quarter with 3-pointers by Makhi Taylor and Tyler Voshell to lead 15-11. But the Bulldogs produced a 15-3 run to open the second quarter for a 26-18 lead.

The Warriors put together a 6-0 spree early in the third quarter for a 31-30 lead and the game stayed close until Warner and Vener combined for their eight-point run in the final minutes of the fourth.

Warner had missed Easton’s previous game. “He was sick our last game,” Coach Hynson said. “This is his first game back and he hit some big 3-pointers for us tonight.”

The Bulldogs (1-3, 1-2) were missing the services of Montreyse Deshields and Leroy Fitchett. Both are expected to return for Thursday’s game at Cambridge-South Dorchester.

“We didn’t have our full team tonight. You can’t expect to win a game with eight guys,” North Caroline head coach Steve Perry said. “Two of our starters didn’t play. We just ran out of gas. I didn’t have too much depth tonight, and two of the guys that played tonight were hurt, so we were wounded soldiers out there. We competed but we just ran out of gas.”

CAMBRIDGE — Kendal Moxey had 24 points and 19 rebounds, and Jiyah Hollis scored 17 points and pulled down a dozen boards to pace the Lions.

Lily Dixon finished with 12 points for the Buccaneers and Lauren Tinelli had 11.