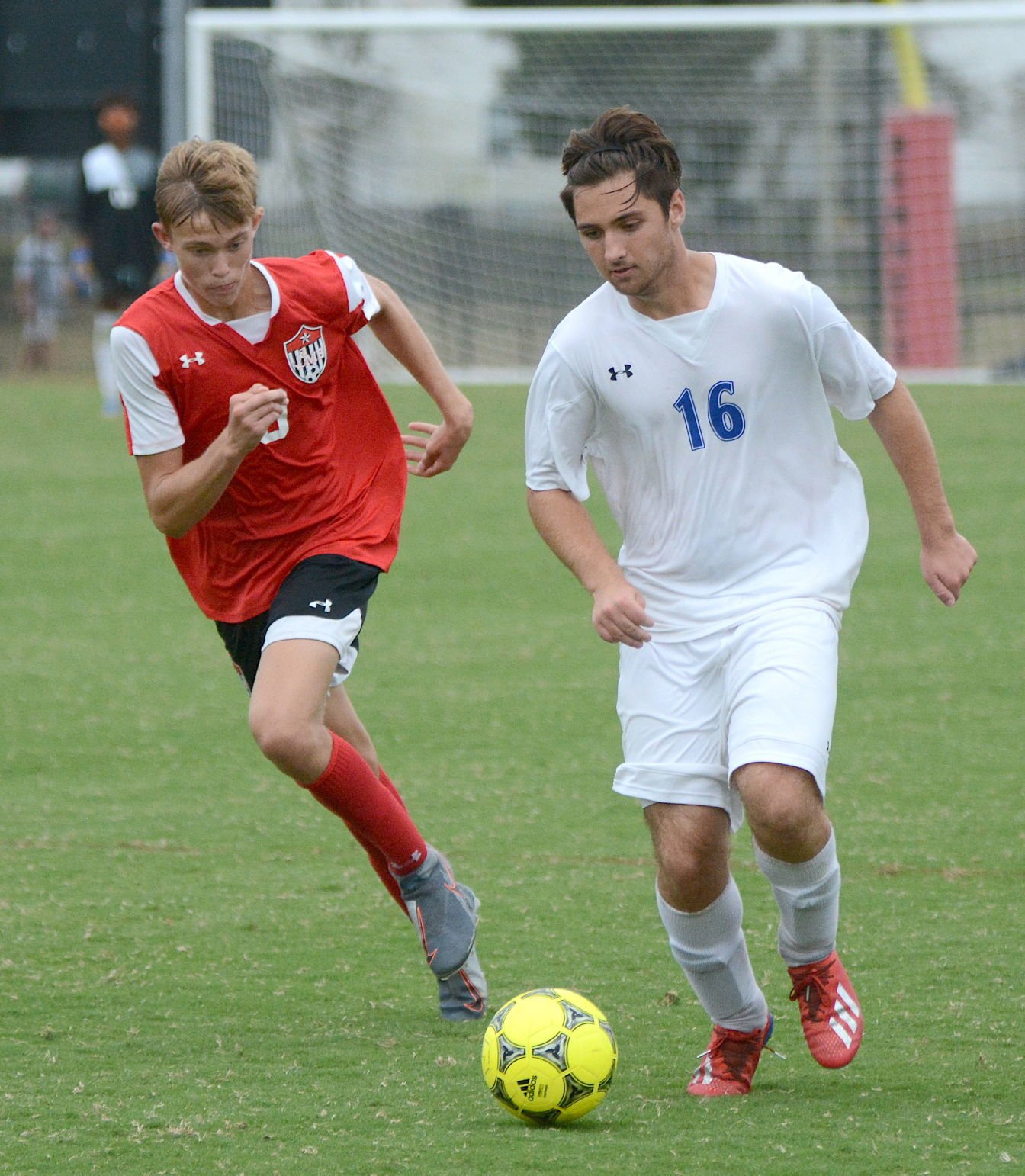 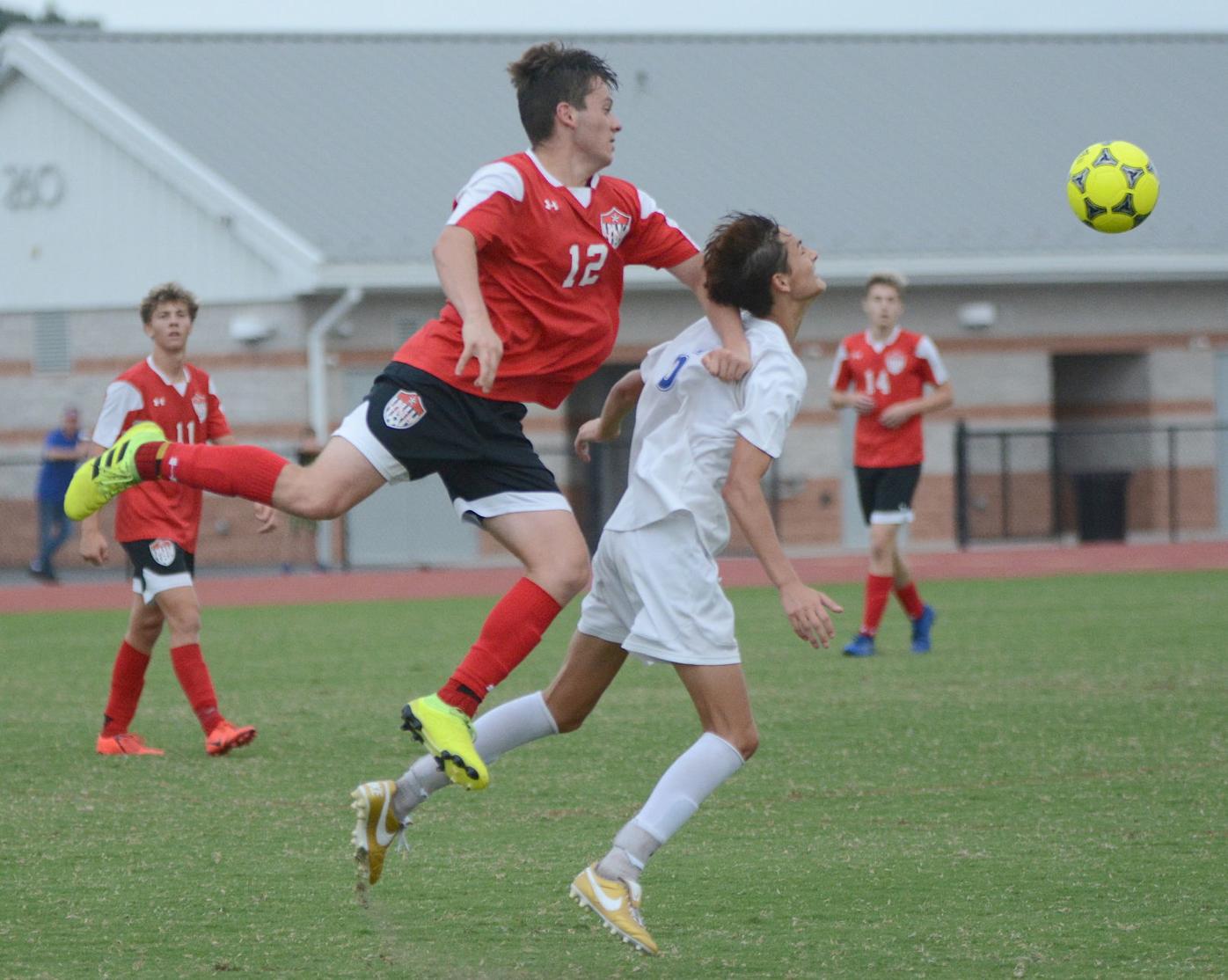 James M. Bennett’s Drew von Kollmar (12) climbs the back of North Caroline’s Brett Blue while trying to play a ball during Thursday’s clash in Salisbury. 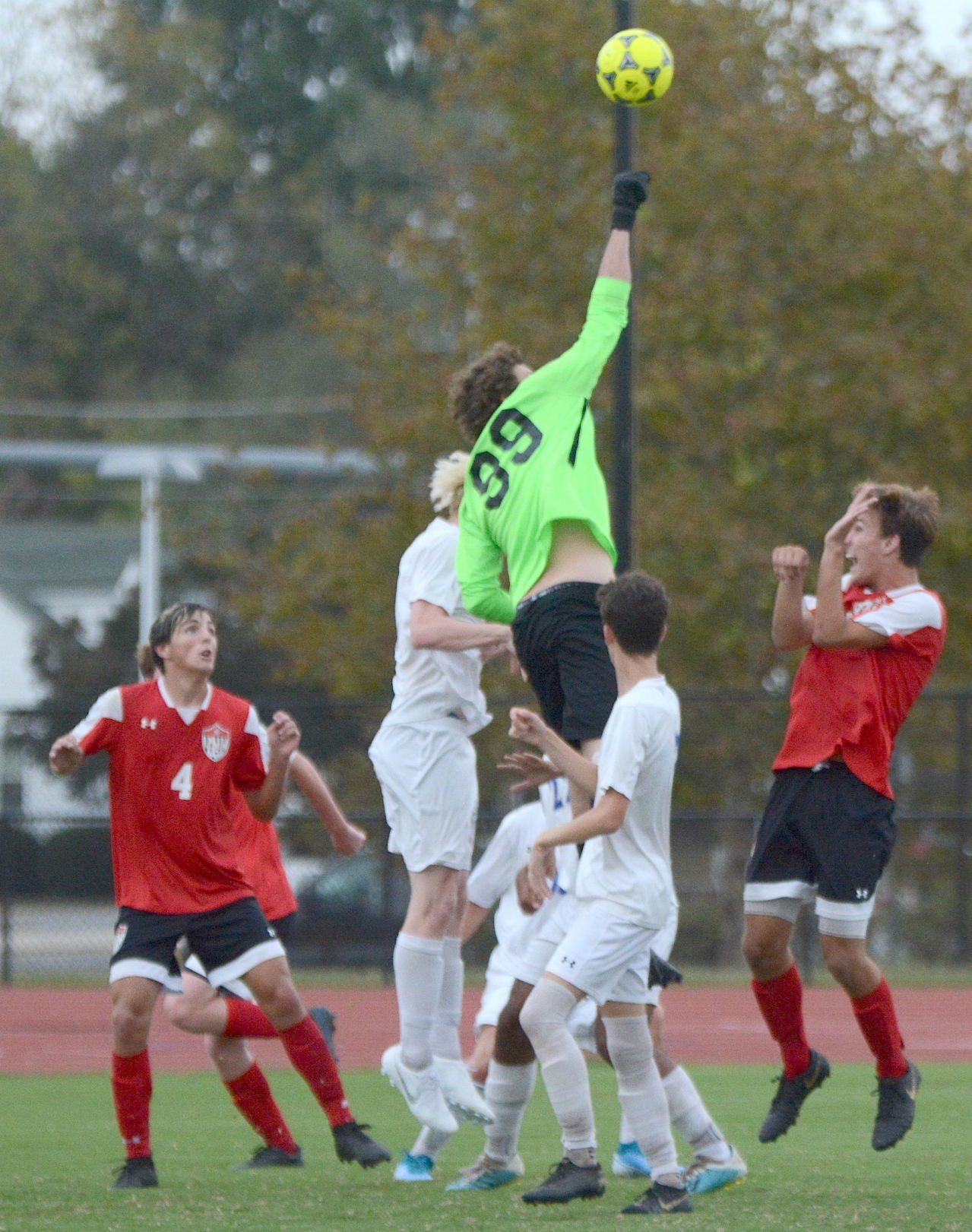 James M. Bennett keeper Will Simpson (99) skies to bat away a North Caroline corner kick during Thursday’s second half. 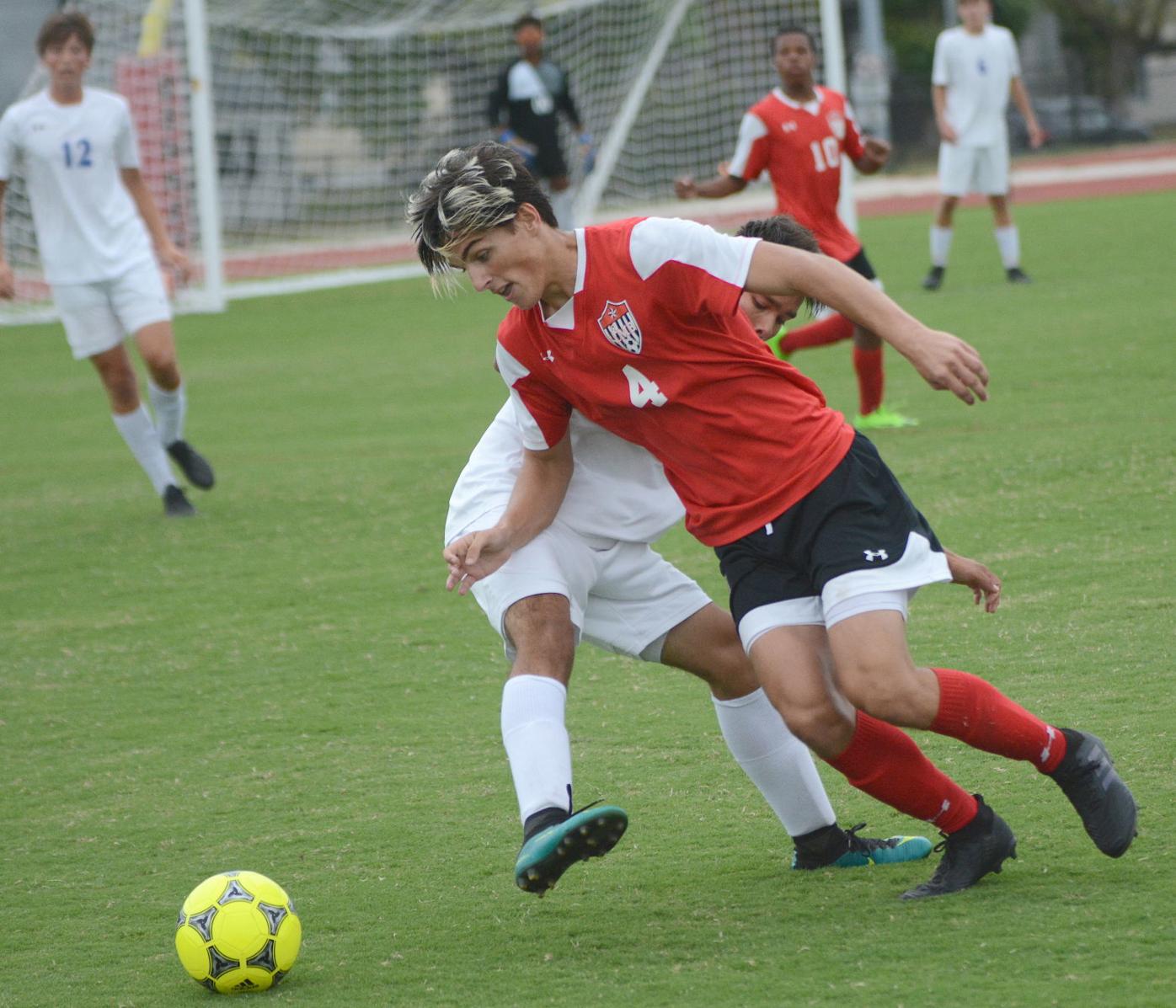 James M. Bennett’s Drew von Kollmar (12) climbs the back of North Caroline’s Brett Blue while trying to play a ball during Thursday’s clash in Salisbury.

James M. Bennett keeper Will Simpson (99) skies to bat away a North Caroline corner kick during Thursday’s second half.

SALISBURY — He thought the effort was great.

The final result, not so much.

“It’s OK to be angry about this result,” North Caroline High boys’ head soccer coach John Austin said Thursday, Oct. 3, after his Bulldogs had their six-game win streak snapped via a 2-1 loss to unbeaten James M. Bennett at the Shipyard. “But we cannot be disappointed with our effort. Our effort was great tonight. That’s a really good team we played tonight.”

“We expected a battle coming in,” Clippers head coach Gabe Kane said after his team’s narrowest margin of victory this season — not counting a 1-1 double-overtime draw with Kent Island. “They’ve already beaten Queen Anne’s and Easton, so we knew that we were going to be in for an 80-minute game today. And it was; it was right down to the last second.”

It may have taken more time than that had North Caroline (6-2), according to Austin, not been on its heels in the first five minutes, when Bennett freshman Gianluca Secondi crushed a rocket off the hands of Bulldogs keeper Chris Jones and into the right corner of the net with 4 minutes, 52 seconds elapsed in the game for a 1-0 lead.

A game that remained 1-0 until 22:30 remaining in the first half, when North Caroline’s Brett Blue struck a perfect corner kick in front of the goal that Nate Sharp headed past Bennett keeper Will Simpson for a 1-1 tie.

“We’ve been working on corners a lot in practice,” Austin said. “We worked to make sure we get to our spots on corners. We have basically six different plays. The play’s basically what spot does the ball go, and who’s making the run. And we hit that play perfectly.

“Nate made a great run; exactly where he’s supposed to be,” Austin continued. “Nate ran to his spot and he was by himself. He towered over everyone. It was perfect. It was a beautiful goal.”

Bennett couldn’t convert on back-to-back corner kicks, but with 10:31 left in the first half, freshman Jackson Wilkens got onto a ball inside a scrum in front of the goal and hammered a shot to the left of Jones for a 2-1 Clippers lead.

“That one is just laying on the guy’s feet and it is what it is,” Austin said of Wilkens’ go-ahead goal.

Bennett almost extended its lead to 3-1 with 16 seconds left in the first half, but Jones (five saves) stopped Garrett Southern’s big shot from close range to keep it a one-goal margin.

“We were really happy with their performance,” Kane said of his team. “(Taking) 10 shots in the first eight minutes and their keeper did a great job; made a couple of great saves. And we just didn’t get on the end of a lot of the opportunities. But I thought we possessed the ball well.”

Jones came up with another big save in the sixth minute of the second half, handling a shot from left wing. Simpson preserved the Clippers’ one-goal lead with a stop on Blue with 10 minutes elapsed.

Bennett continued creating more scoring opportunities. Wilkens hit the right post with 19:54 remaining, then was stopped by Jones a little more than three minutes later. Then with 8:20 left, Bennett’s Colin Hofmann dished to Paul Oscar, who unloaded a big shot over everything.

North Caroline had a handful of runs into the Clippers’ end in the closing 10 minutes, but couldn’t get anything directed at Simpson.

“(Arturo) Garbanzo, number eight in the back, just played tremendous,” Kane said. “Coach (Tim) Perunko and Coach (Bret) Hofman noticed their number 16 (Austin Barnes) was getting loose and we made a small adjustment there, and from then on we were happy with the play.

“Very happy with the defense,” Kane continued. “Our two center backs, TT Garbanzo and Ethan Ryan are as good as they get. In the run of play they stop everything. Anything over the top they clean up. And really the danger was on the set pieces; the corners and the fouls. As long as we didn’t give those away I had no worries the whole day.”

“We really wanted to see where we were because we’re 5-0 in the North,” Austin said. “But the South competition is sometimes better. But it was a great soccer game. It’s only going to help us going forward.”

Notes: Yesterday’s win was the 40th for Bennett’s seniors, according to Kane. … The Clippers outshot North Caroline, 14-4. … Simpson had five saves.

SALISBURY — The Buccaneers improved to 6-1-1 with the easy win, remaining 5-0 in the North Bayside.

MARDELA SPRINGS — Down 3-0 with 20 minutes left in regulation, the Vikings (4-5) exploded for four straight goals to stun the Warriors (2-5).

SNOW HILL — Nolan Sawatsky made 12 saves for his first shutout of the year and Ben Romberger scored twice as the Saints improved to 4-4.

Josh Sherwood and Kain Lynch (assist) added one goal apiece for St. Michaels, and Owen Baum and Mike Kemp were each credited with an assist.

PRINCESS ANNE — Colby Rickwood scored two goals and set up Hummas Waheed’s strike, as the Colonels notched their first win of the season.