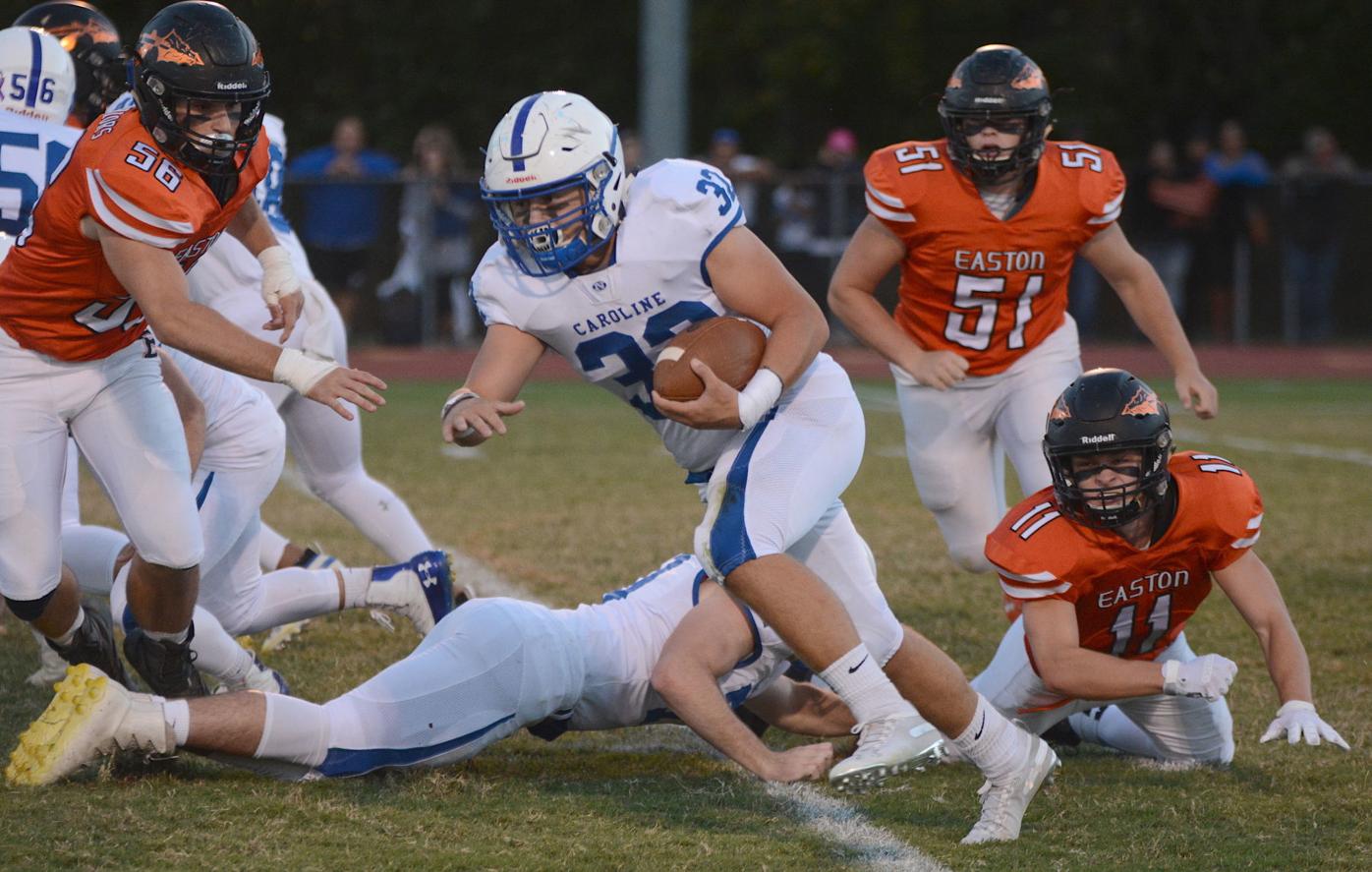 North Caroline running back Trent Hillard carried 19 times for a career-high 206 yards and one touchdown during Friday night’s 49-7 victory over Easton. 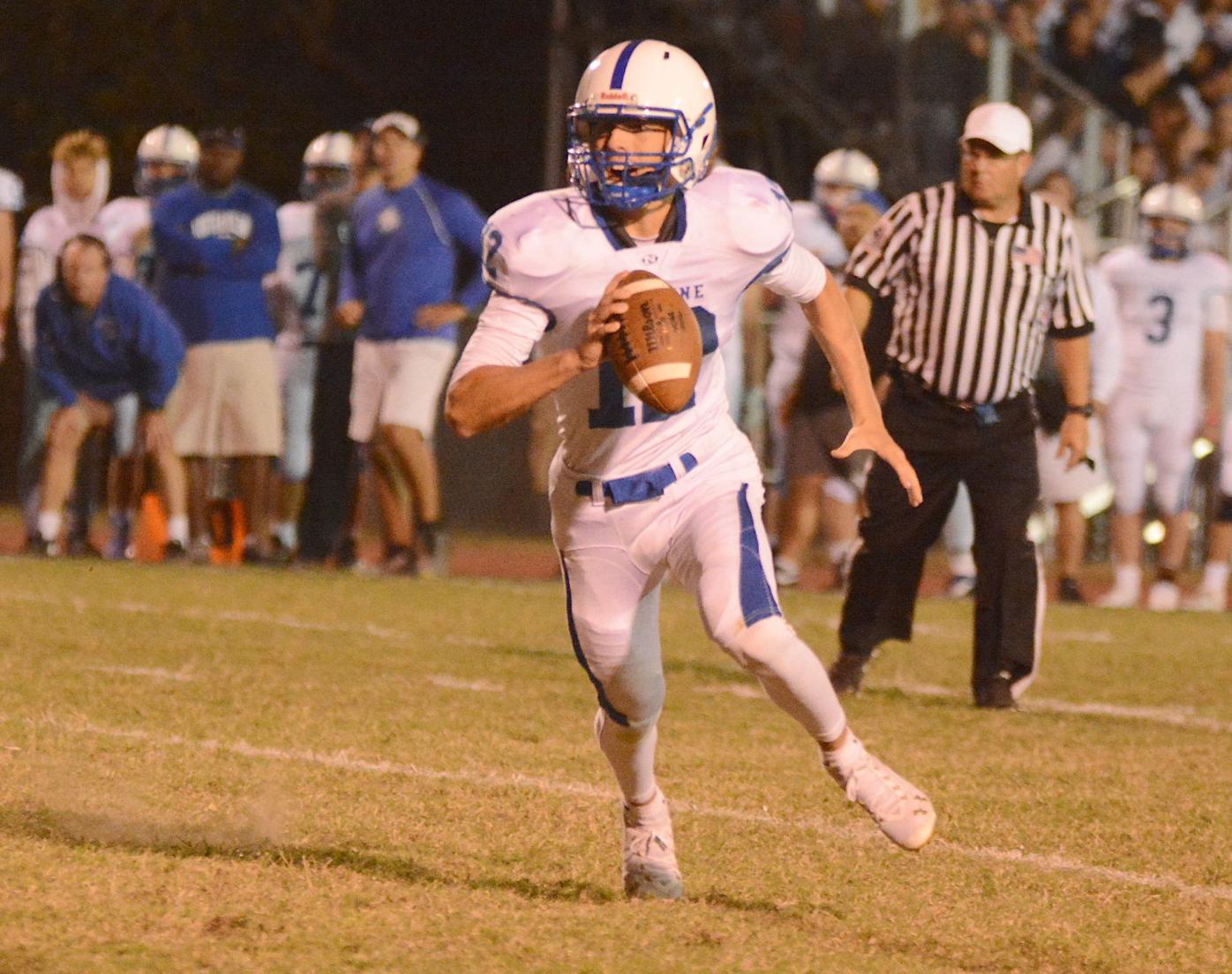 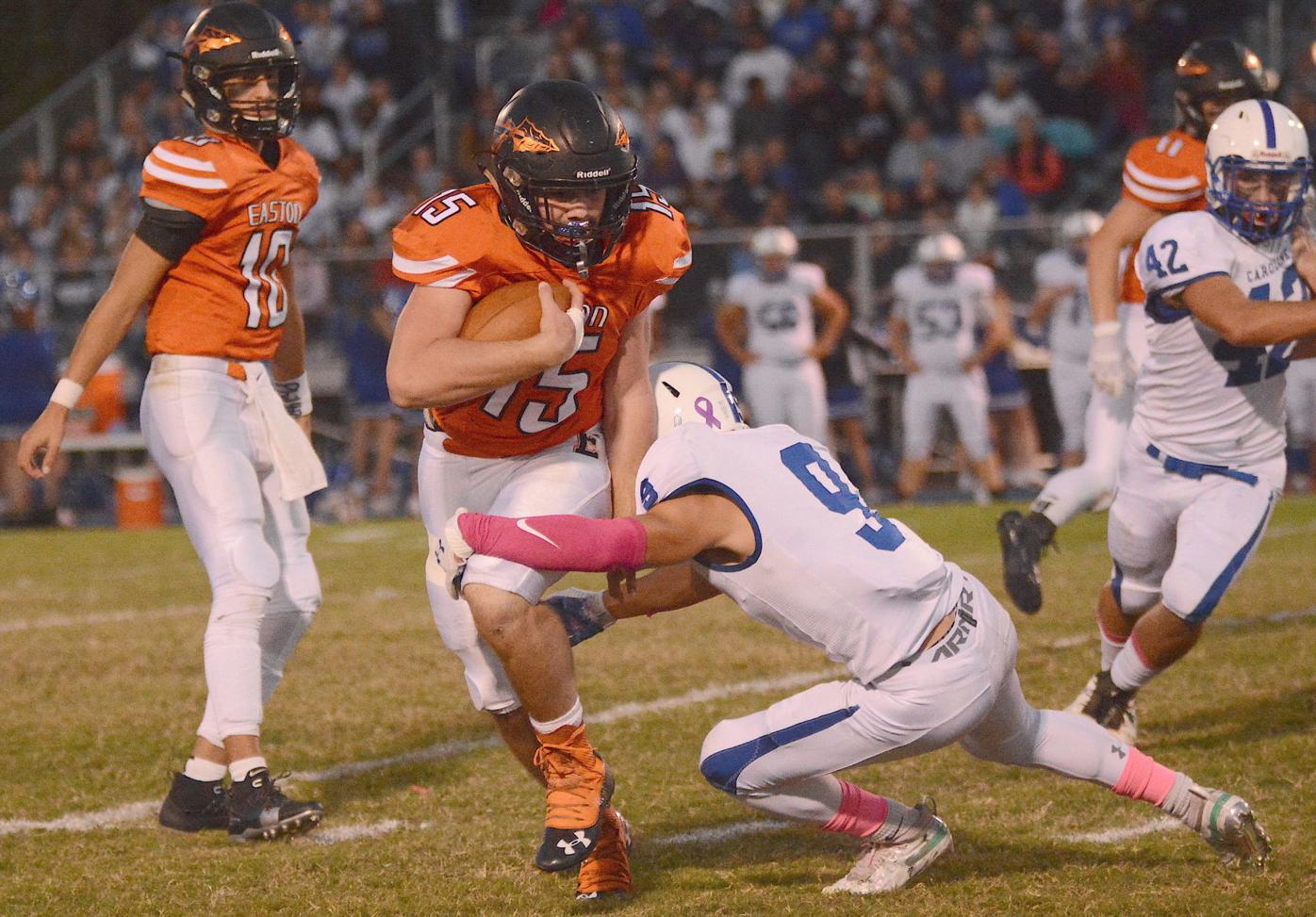 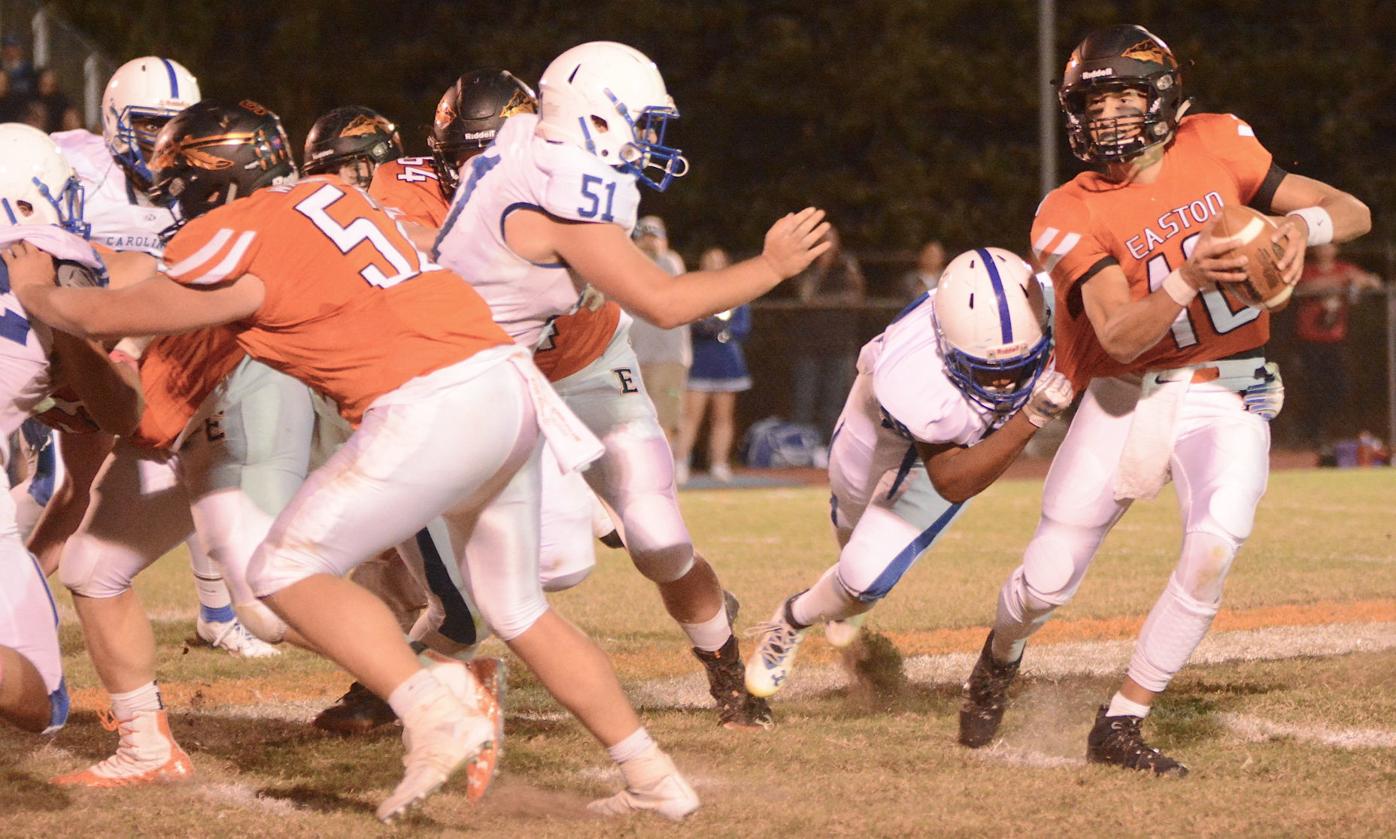 Easton quarterback Ryan O’Connor (10) is tackled from behind by North Caroline’s Carlton Johnson on Friday night. 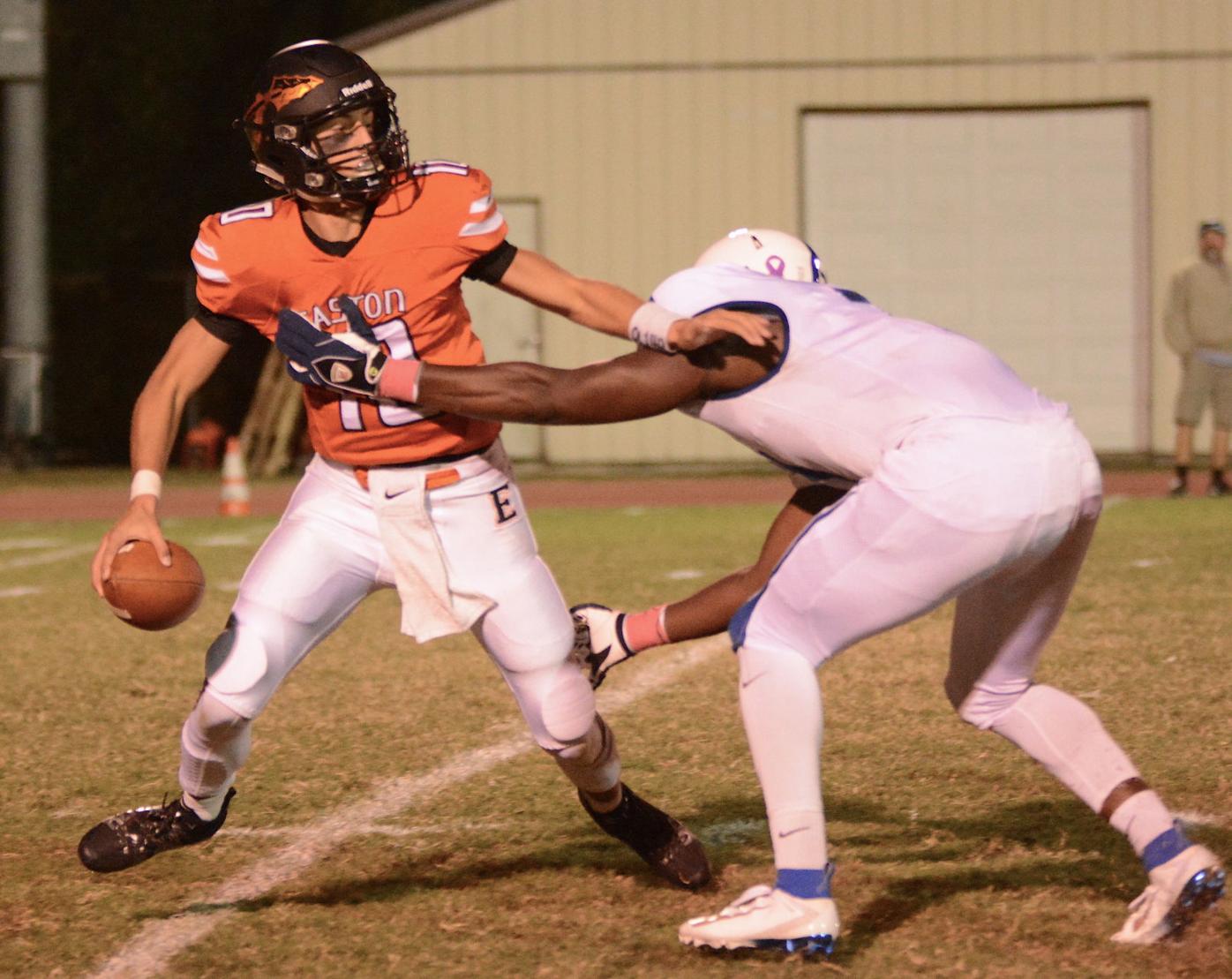 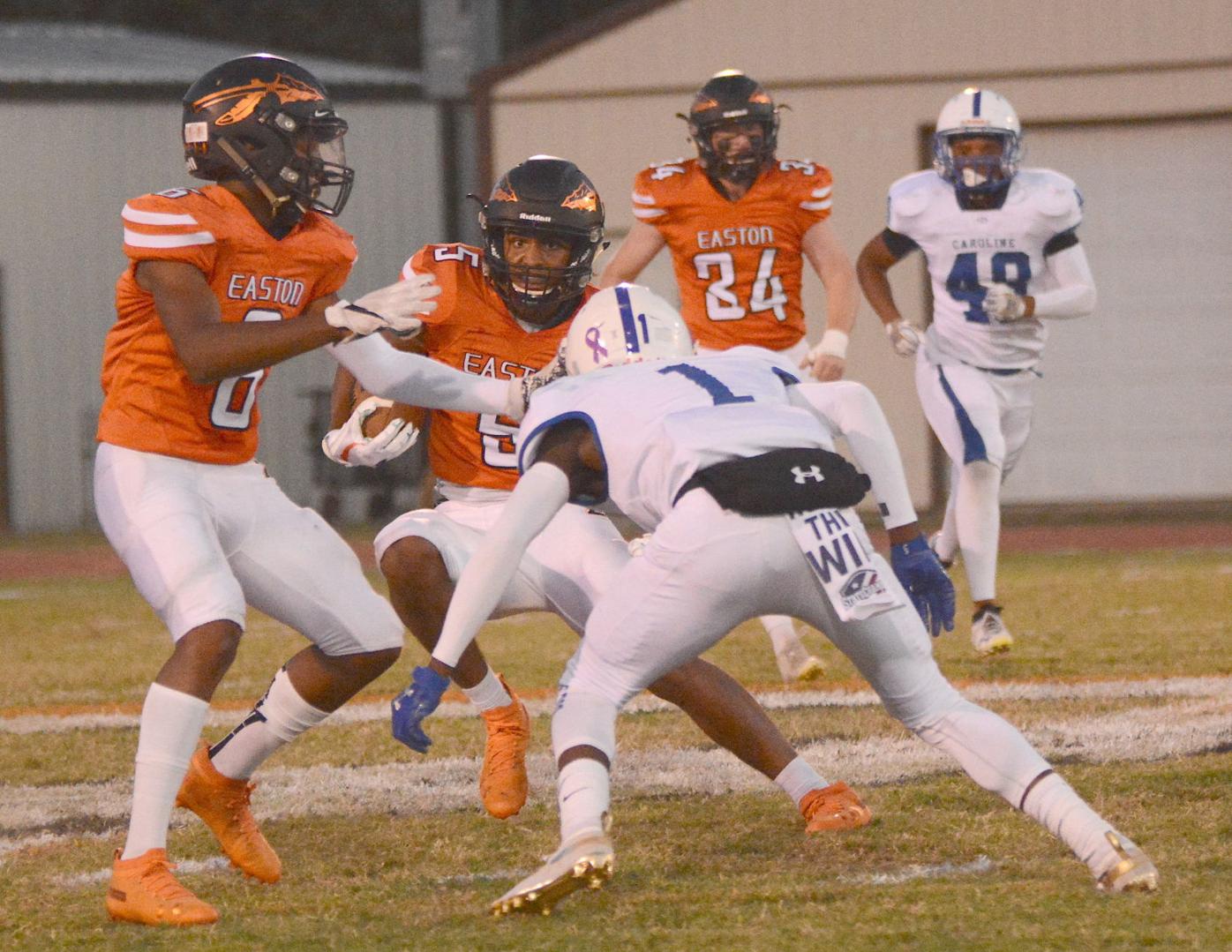 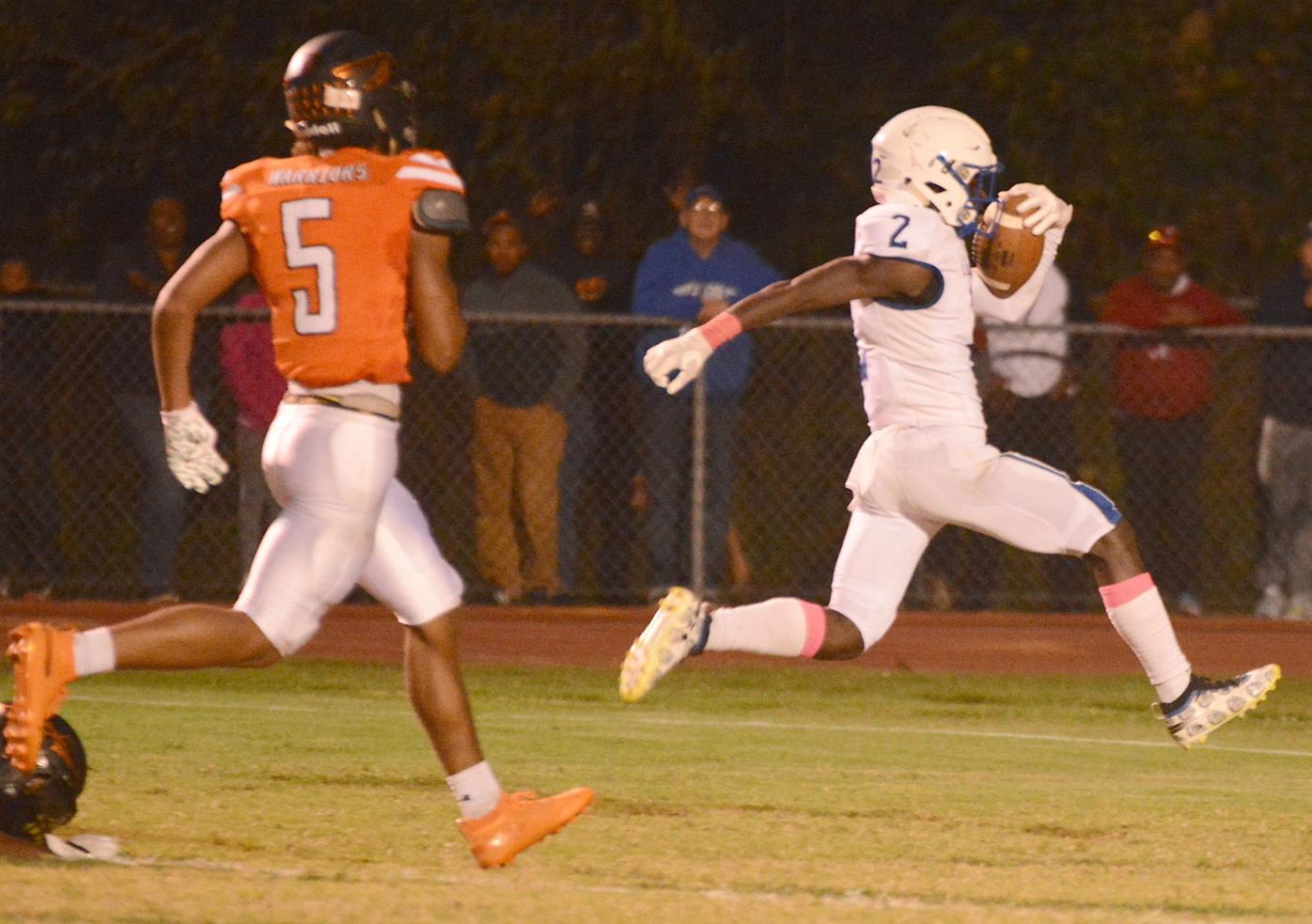 North Caroline's Montreyse Deshields (2) sprints into the end zone at the end of his 16-yard touchdown run Friday night that gave the Bulldogs a 26-7 lead.

North Caroline running back Trent Hillard carried 19 times for a career-high 206 yards and one touchdown during Friday night’s 49-7 victory over Easton.

Easton quarterback Ryan O’Connor (10) is tackled from behind by North Caroline’s Carlton Johnson on Friday night.

North Caroline's Montreyse Deshields (2) sprints into the end zone at the end of his 16-yard touchdown run Friday night that gave the Bulldogs a 26-7 lead.

EASTON — Easton High quarterback Ryan O’Connor is having another fine season, throwing for 12 touchdowns and over 1,000 yards through the season’s first four games.

But North Caroline High has some pretty strong feelings about its quarterback, Wyatt Laclair.

Laclair — and all of North Caroline for that matter — played a heckuva a game Friday night, Oct. 4, the senior quarterback completing 5 of 9 passes for a season-high 117 yards and four touchdowns in a 49-7 pounding of Easton at Warrior Stadium.

“We knew if we wanted to kind of get after it this game, we couldn’t just sit and pound the ball,” McCormick said after the Bulldogs pushed their record to 5-0. “They (the Warriors) were going to put eight or nine guys in the box, and they did. So we figured we’re going to throw the ball until they stop it, and Wyatt kept putting the ball on the money and we were good.”

North Caroline was good in seemingly every phase of the game against the Warriors (3-2).

Senior running back Trent Hillard carried 19 times for a career-high 206 yards and one touchdown, pacing a 316-yard rushing attack. The Bulldogs scored on five of their seven first-half possessions while building a 35-7 halftime lead, and scored on both of their second-half possessions.

Then there was North Caroline’s defense.

Led by their two outstanding defensive ends, Kendron Wayman and Carlton Johnson, the Bulldogs held Easton to zero yards rushing. Hounded throughout the game, O’Connor had season lows for completions (8), attempts (16) and yards (93), was sacked four times for losses of 36 yards, and twice was tackled behind the line of scrimmage on scrambles.

“We don’t play too many teams that throw the ball like this, so this was a chance to put pressure on him, and get after it,” Wayman said.

“They destroyed us in the trenches,” Easton head coach Pat McGlinchey said. “They handled us. Whether it was their offensive line against our defensive line, or vice versa.”

On the game’s first play from scrimmage, Laclair hit Montreyse Deshields with a 52-yard touchdown pass. Chris Curler’s extra-point kick made it 7-0 with just 25 seconds elapsed.

After an Easton three-and-out, North Caroline took possession at its 14-yard line. Laclair threw incomplete on first down, but Hillard was sprung for a 52-yard gain to the Warrior 34. Five plays later, Laclair hit Hunter Healey in the right flat for an 8-yard touchdown pass, Curler’s PAT moving the Bulldogs to a 14-0 lead with 8:22 left in the first quarter.

“It was huge for us,” Laclair said of the 14-0 start to the game. “It’s a big homecoming crowd for them, everybody’s hyped up. It’s a lot of emotions and stuff going on, but we got ourselves straight and went right down and scored.”

The Warriors, who were 4 of 12 converting on third down for the game, converted twice on their second possession, as O’Connor found Harry Callahan for a 47-yard pickup to the Bulldogs 13, then ran for a 6-yard gain. That set up O’Connor’s short pass to Shawn Warner, who took the toss from his quarterback and swept two yards around right end for a touchdown. Brogan Stofa’s point-after boot made it 14-7 with 5:30 left in the first.

Grant Copper then intercepted LaClair on the next play from scrimmage and returned to the Bulldogs’ 25, putting Easton in position to pull even, or trim its deficit, while sending its large homecoming crowd into delirium.

But Jarin Winters was dropped for a 1-yard loss before O’Connor threw incomplete. After a delay-of-game penalty against Easton and another incompletion, Warner carried to the 20 on fourth down, five yards short of a first down, returning the ball to North Caroline.

After an ineligible-man-downfield flag, the Bulldogs drove 85 yards, Hillard carrying eight times on a 14-play scoring march that ended with his 2-yard scoring run 1:05 into the second quarter for a 20-7 lead. Thatcher Knox blocked Curler’s point-after attempt, but Easton never recovered from the momentum swing.

“It ended up being really big,” McGlinchey said. “It’s one thing if we got stopped and then we stopped them. But we never stopped them all night. The only stop was Grant’s interception. So for a game that had one turnover and the score was 49-7, I mean that’s really unacceptable.”

“It changes everything,” McCormick said of the Bulldogs’ stop-and-score. “It’s 14-7. They go down, they get some points on the board and it’s 14-14. I think we stopped them and went right down and scored. That is a huge momentum change.”

Easton’s three ensuing possessions ended in punts, while North Caroline scored on two of its final three first-half drives. Deshields scored on a 16-yard run with 7:55 left in the first half. Then on the final play of the opening half, LaClair, on play action, found Deshields alone down the middle of the field for a 35-yard scoring strike before hitting Healey with a two-point conversion pass for a 35-7 lead.

“Laclair is a really good football player,” McGlinchey said. “I didn’t expect him to be so accurate on the passes. But his guys were wide open, too. Our eyes are caught in the backfield on a couple of those touchdowns.”

LaClair’s 20-yard touchdown pass to Jason Brown with under three minutes remaining in the third quarter set the running-clock in motion. Ethan Dvorak capped the scoring with a 2-yard touchdown run with 4:10 left in the game.

“Kendron and CJ (Johnson), we knew we had to stop them in order to have a chance,” McGlinchey said. “Ryan was having to throw the ball in a second and a half. That’s a really hard thing to do and move down the field consistently, because you have to have your routes run precisely.

“Not only those two guys, but their entire defensive line did a great job,” McGlinchey said, praising tackles Ty Farmer and Dylan Bunce. “Their inside linebackers (Owen Doyle and Hillard) did a great job. I told the kids, ‘They wanted it more than you guys.’”

CAMBRIDGE — Khalik Beasley had touchdown runs of 26 and 36 yards and the Vikings defense delivered a pair of scores as Cambridge-South Dorchester won its fourth straight.

“We didn’t tackle that well, or block well, but we muscled through for the win,” Viking head coach Gaven Parker said, his team now 4-1.

Nandua took a 6-0 lead, but Cambridge-SD responded, scoring on four plays on its next possession to pull ahead, 7-6. The Vikings extended their lead to 21-12 at halftime.

Camren Lake had a 19-yard touchdown run, Kanye Pinder scored on a 9-yard run, and Malik Ennals added an 8-yard scoring run. Ennals also had two interceptions, returning one 50 yards for a touchdown.

The Vikings’ other touchdown was provided by 290-pound defensive lineman Avery Nichols, who scooped a fumble and returned it for a score.

Place-kicker James Frazier was 7 for 7 on point-after touchdown kicks for Cambridge-SD.