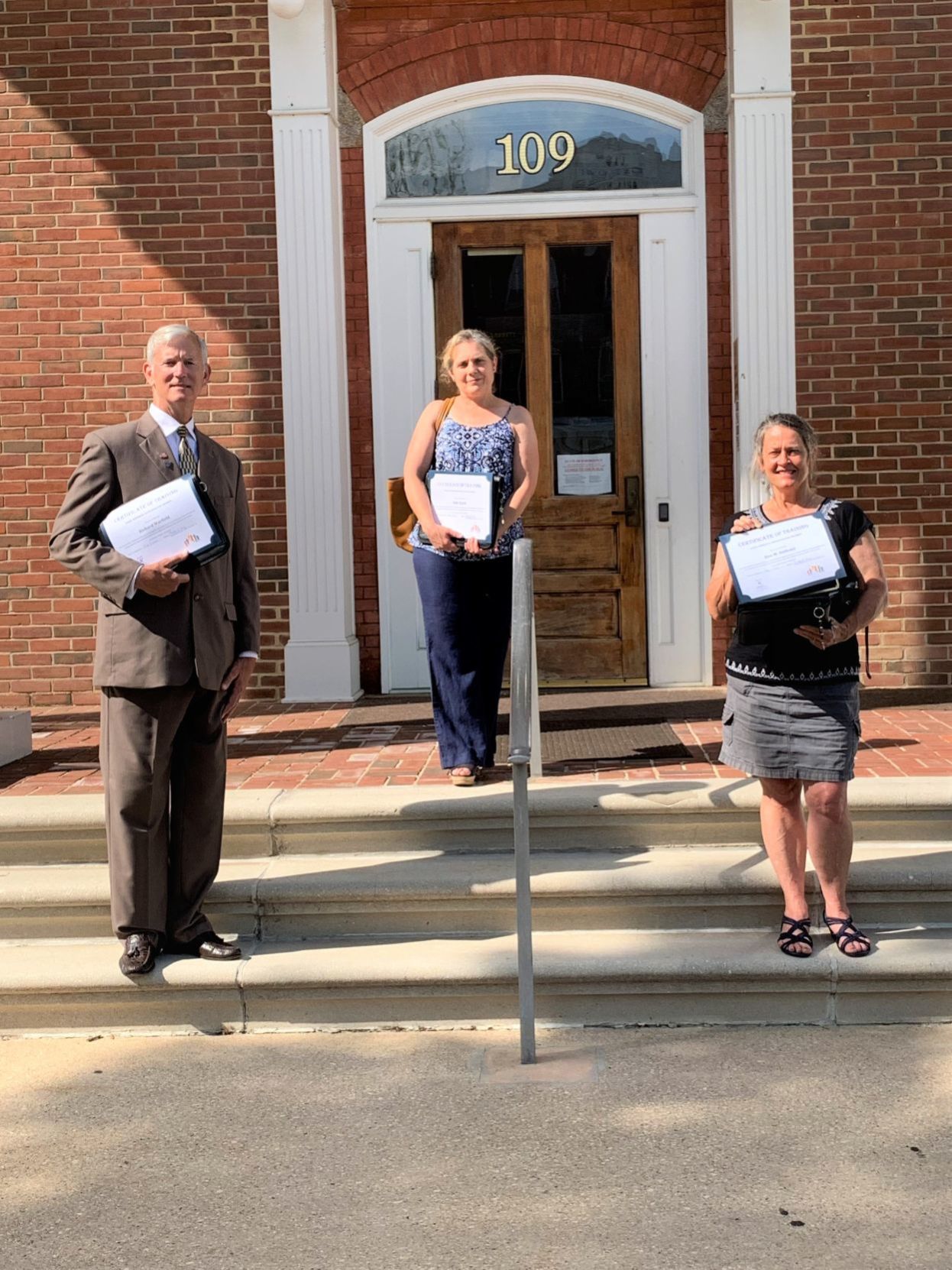 From left, Richard Warfield, Julie Quick and Ann Anthony display their certificates after being sworn in as CASA volunteers at the Caroline County Court House 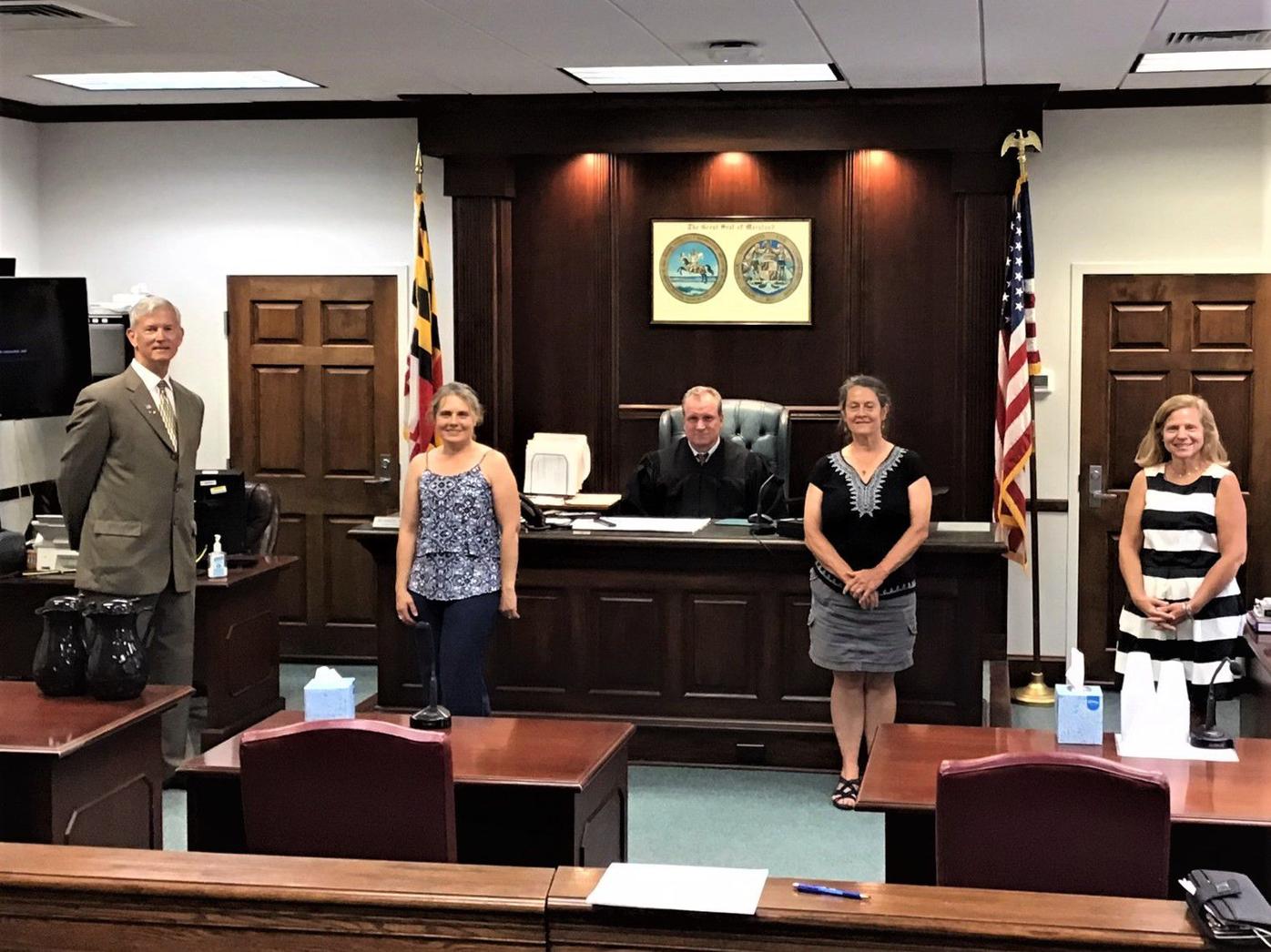 From left, Richard Warfield, Julie Quick and Ann Anthony display their certificates after being sworn in as CASA volunteers at the Caroline County Court House

Sworn in were Ann Anthony, Julie Quick and Richard Warfield. These three committed individuals began their 30-hour pre-service training on March 2 at the CASA of Caroline offices.

On March 30, Governor Larry Hogan issued the stay-at-home order. But the COVID-19 pandemic was not going to stop these three from completing the course in order to serve children in the Caroline County Foster Care System, CASA said in a news release.

“Our new volunteers are eager to begin their work as advocates. We are so grateful for their passion and commitment to the families in Caroline County,, said CASA of Caroline Executive Director Shelly Kulp.

On April 16, the training class was moved online.

The final session was held via Google Hangouts on May 7, but the courts remained closed due to the pandemic.

Newell welcomed the new volunteers, along with Kulp and Amy Horne, CASA director of Outreach and Partnerships. He spoke about the importance of their work.

“We have one case, in particular, that has gone on far too long, but the one constant in the youth’s life has been the CASA volunteer. CASA provides a unique perspective on things the system just can’t do,” Newell said.

He added, “I can tell you for myself and the Magistrate, your opinion is always valued and appreciated and never taken lightly.”

Newell asked each of the new volunteers to raise their right hand while he administered the oath from behind a plexiglass partition.

He congratulated the new advocates and said, “Yours is a labor of love, and it is much needed.”

The newly appointed CASA’s are officially permitted to advocate for abused and neglected children in Caroline County who have been removed from their homes and placed in the foster care system.

As officers of the court, they ensure the children’s needs are recognized and best interests are considered in both the courtroom and the community. Their sworn oath binds them to advocating for the best interest of the child.

“By adding these three new volunteers, CASA of Caroline is better able to meet the needs of children and youth in foster care,” Kulp said.

The COVID-19 pandemic has created conditions for a potential rise in child abuse and neglect. Anxiety about health, education and finances is high. Children aren’t seeing the teachers, counselors and other adults who normally raise concerns about their well-being, Kulp said. The role of a CASA volunteer is more vital now than ever.

New advocate Rich Warfield said, “I find there is no better way to avoid the anxiety and confusion brought on by times like these than by focusing on helping meet the needs of others, particularly the most vulnerable.”

Do you want to make a difference in the life of a child in the Caroline County Foster Care System? Become a CASA of Caroline volunteer.

The new online training program is user friendly and can be started at any time.

To learn more, visit www.carolinecasa.org for information and an application or call 410-479-8301.