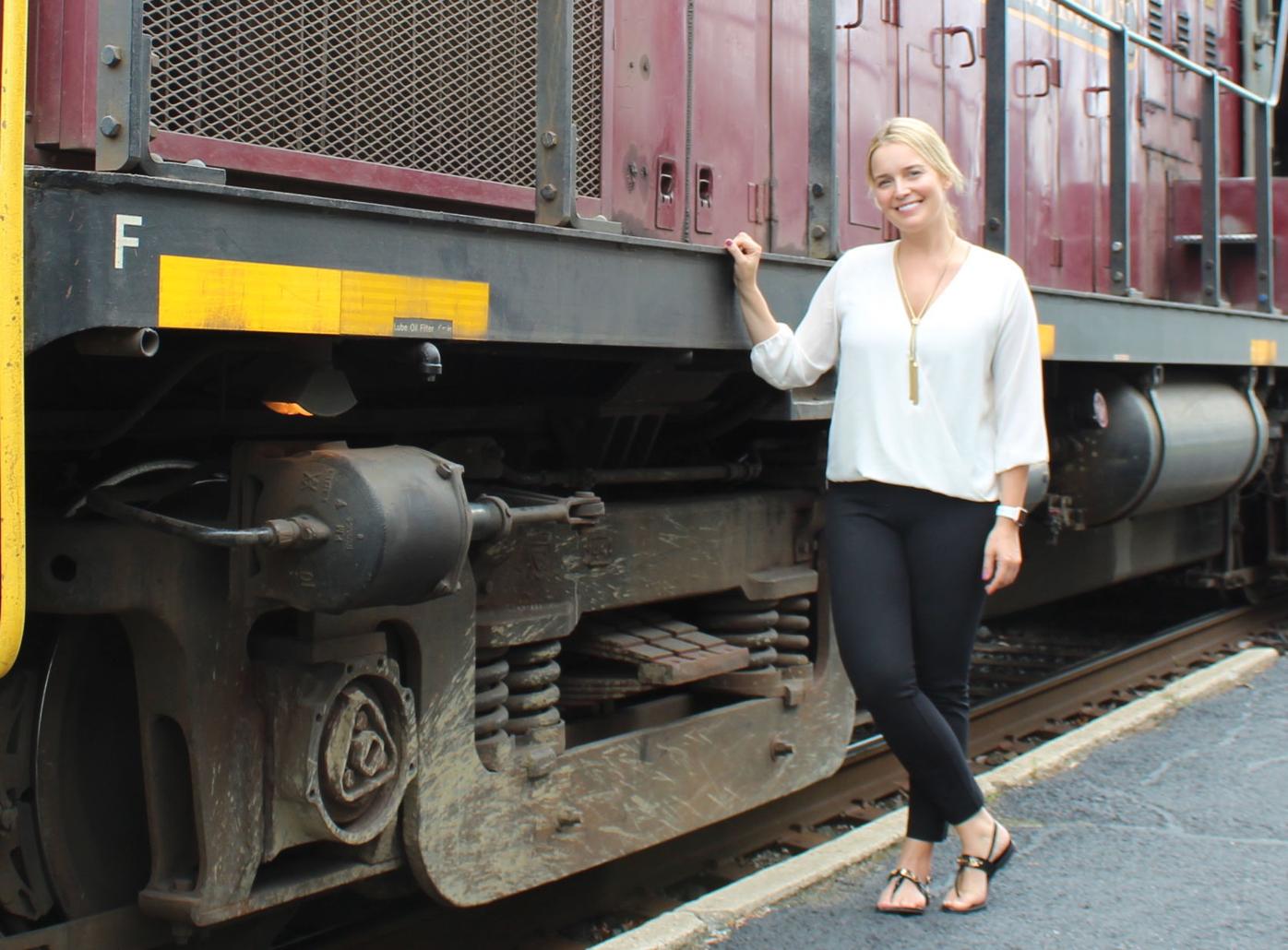 Cathrin Banks is CEO and president of the Maryland and Delaware Railroad Company in Federalsburg. 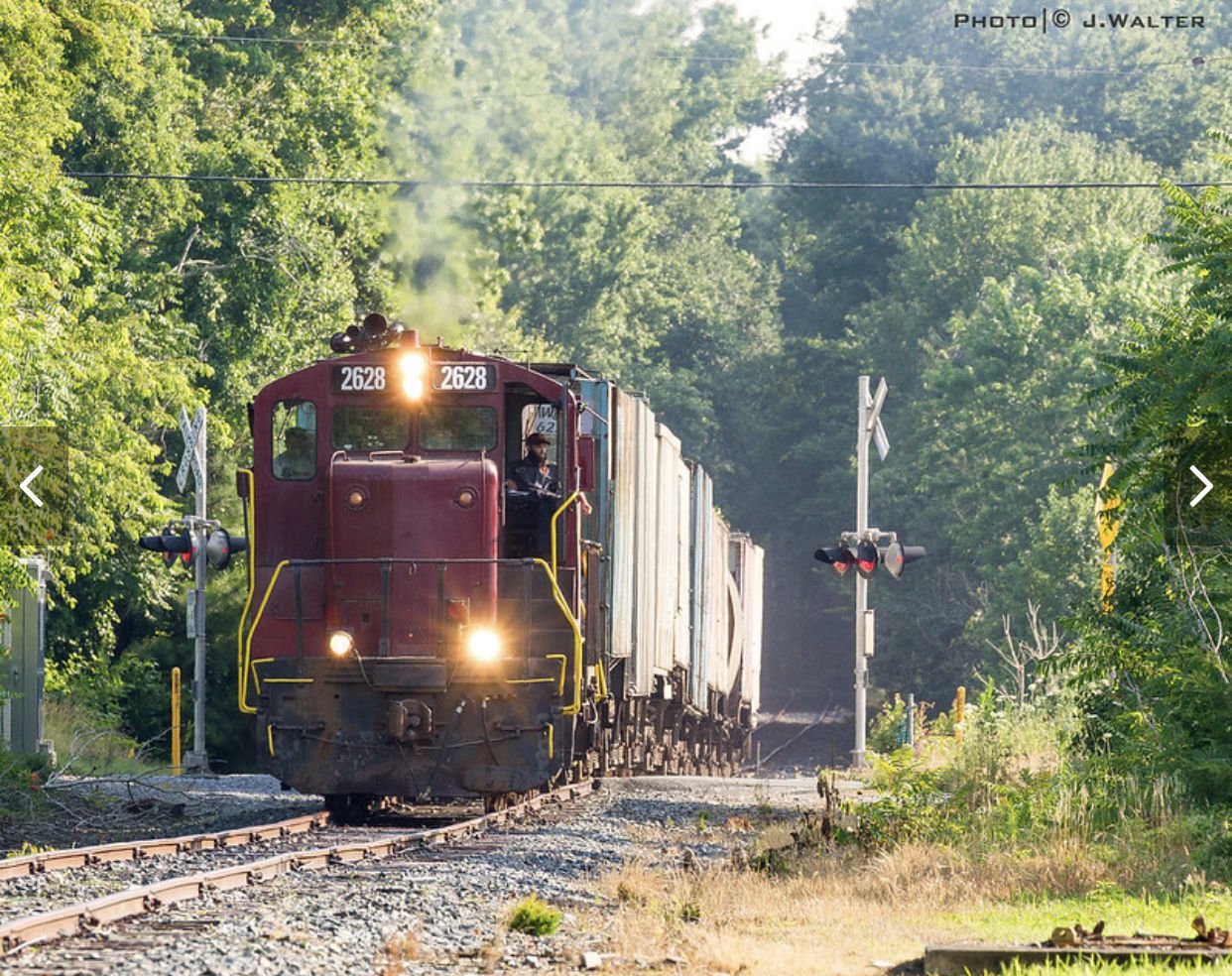 One of the Maryland and Delaware Railroad Company’s six locomotives lumbers past a signal on the Mid-Shore. 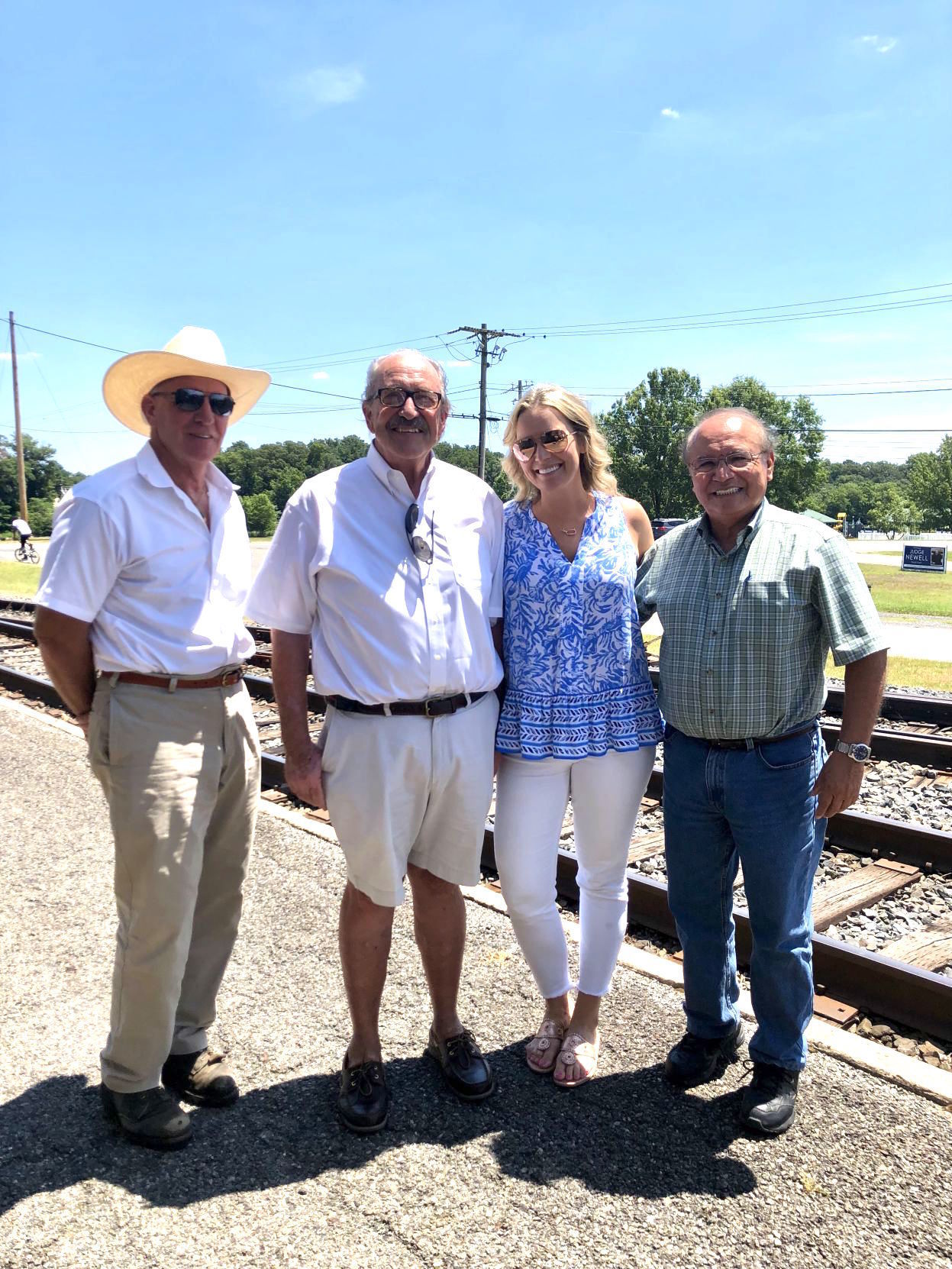 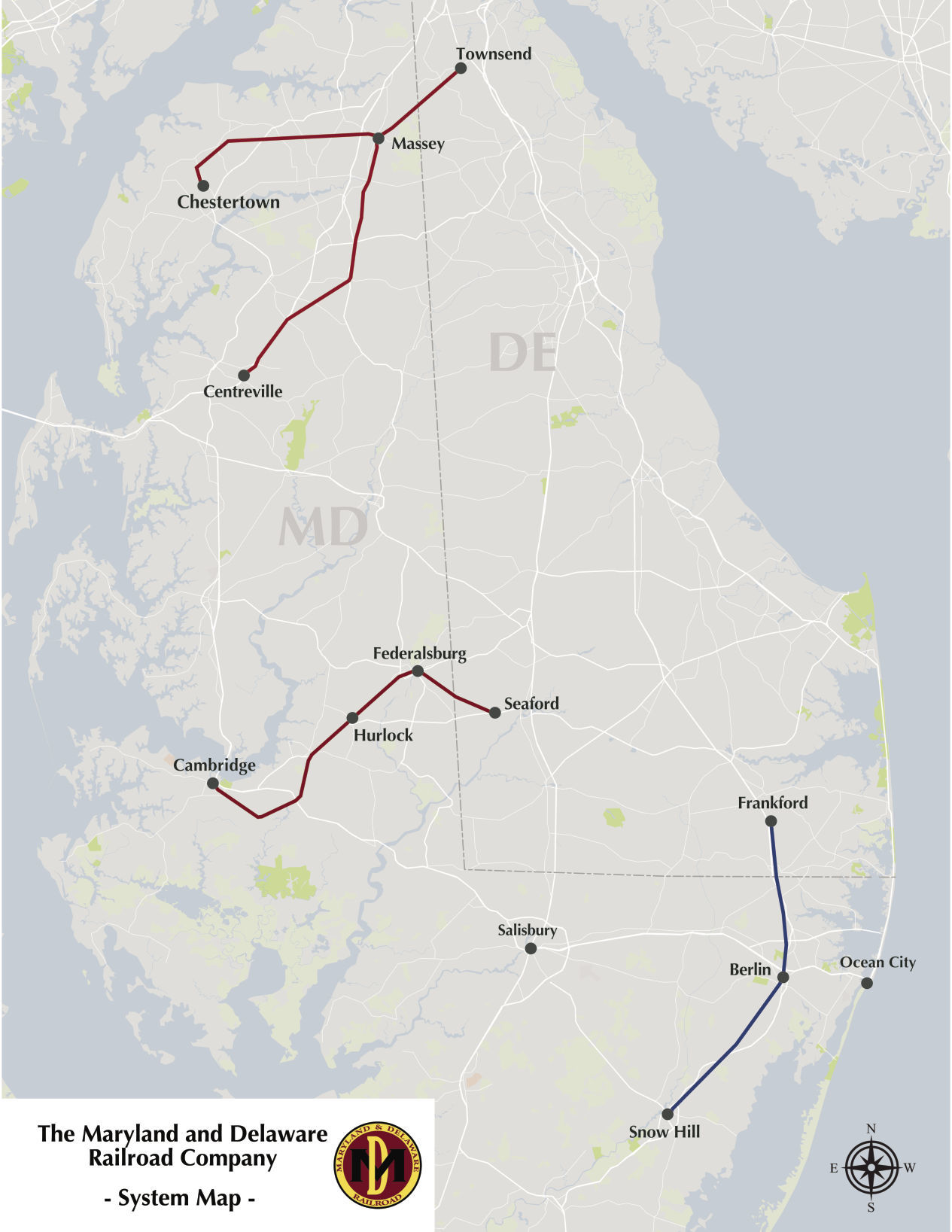 As a Class III shortline railroad, The Maryland and Delaware Railroad Company ships freight on 120 miles of track on the Delmarva Peninsula. 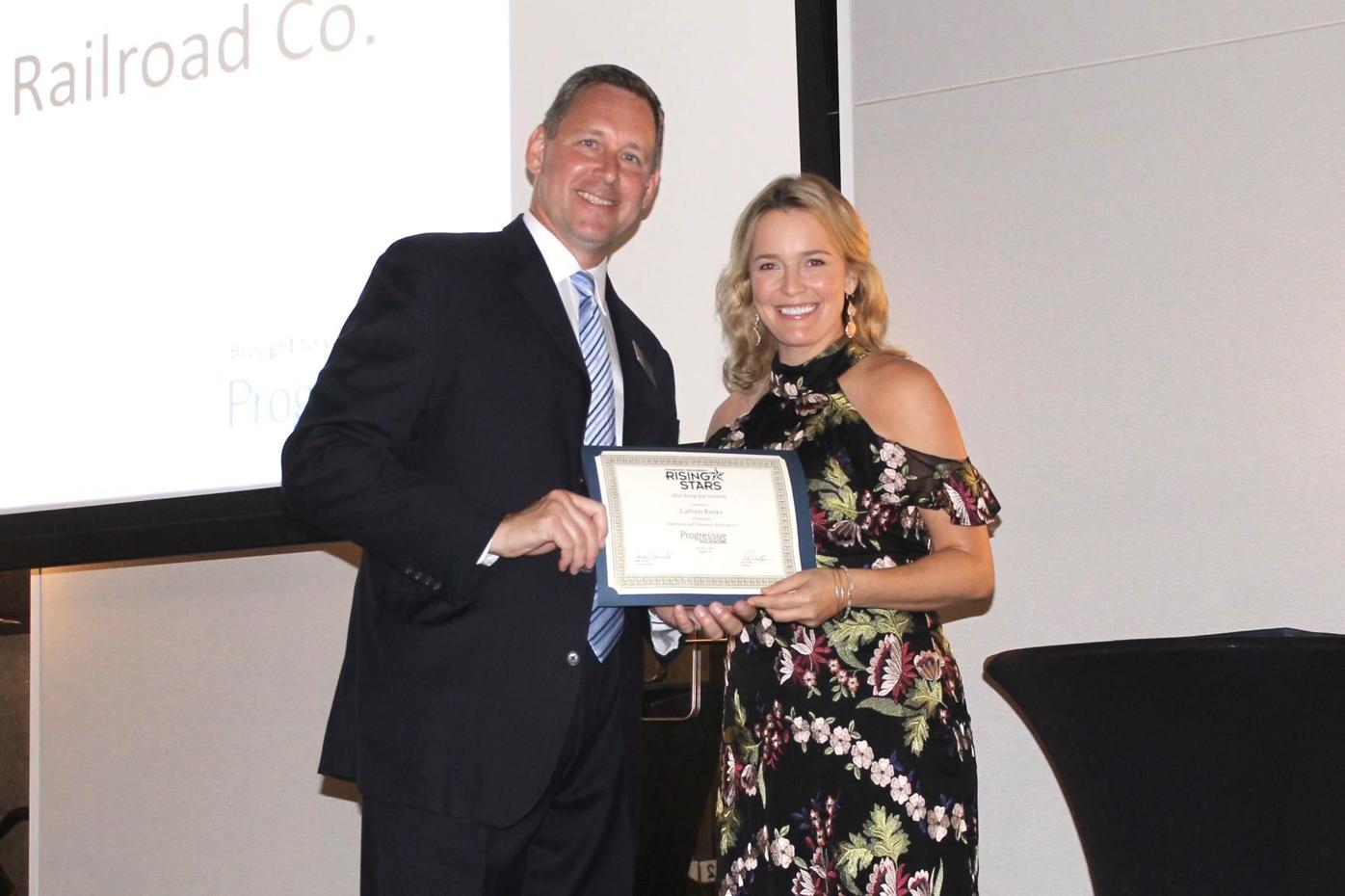 In July, Cathrin Banks was named one of the railroad industry’s 2019 Rising Stars by Progressive Railroading magazine. 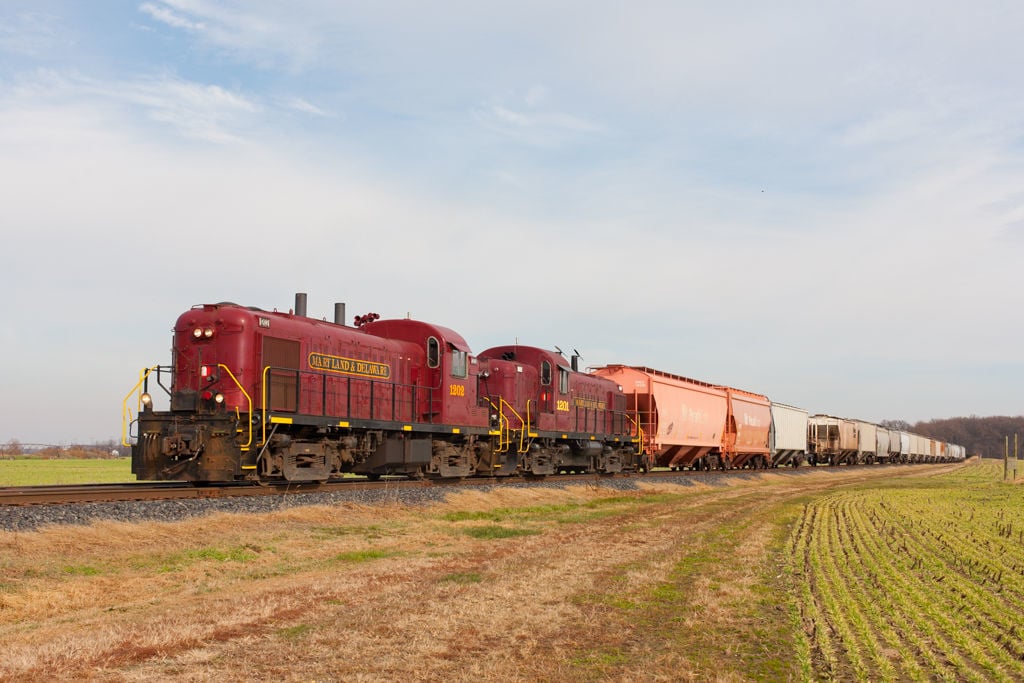 Locomotives 1202 and 1201 switch out cars on MDDE’s Centreville Line in Massey in December 2014. Rarely paired together, the venerable “RS3Ms” join forces a few times each year when freight demand warrants. 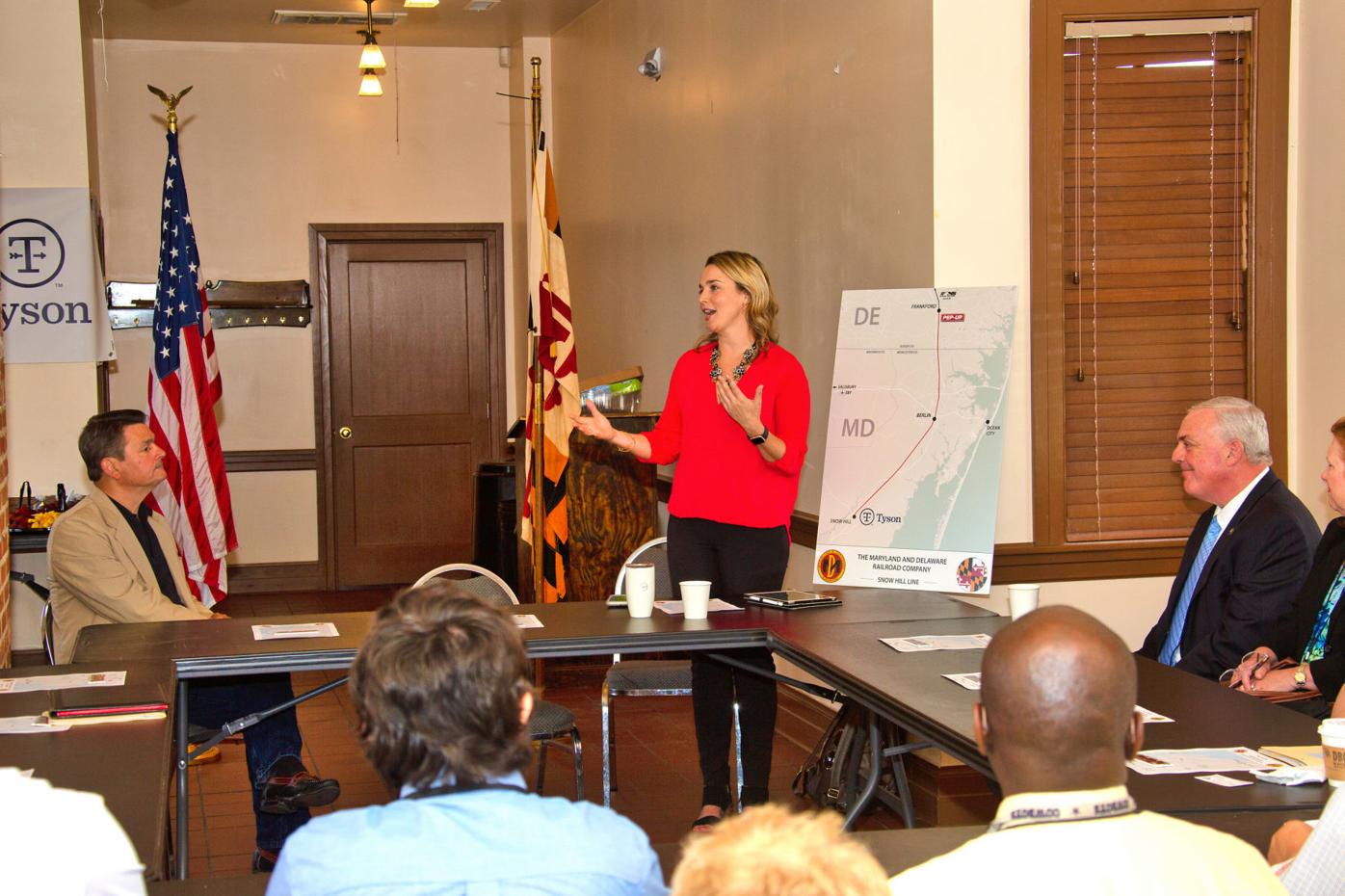 Over 50 people turned out to welcome the train back to Tyson’s in Snow Hill after five years without freight service. Cathrin Banks gave a quick presentation to town, county and state officials before the train arrived. 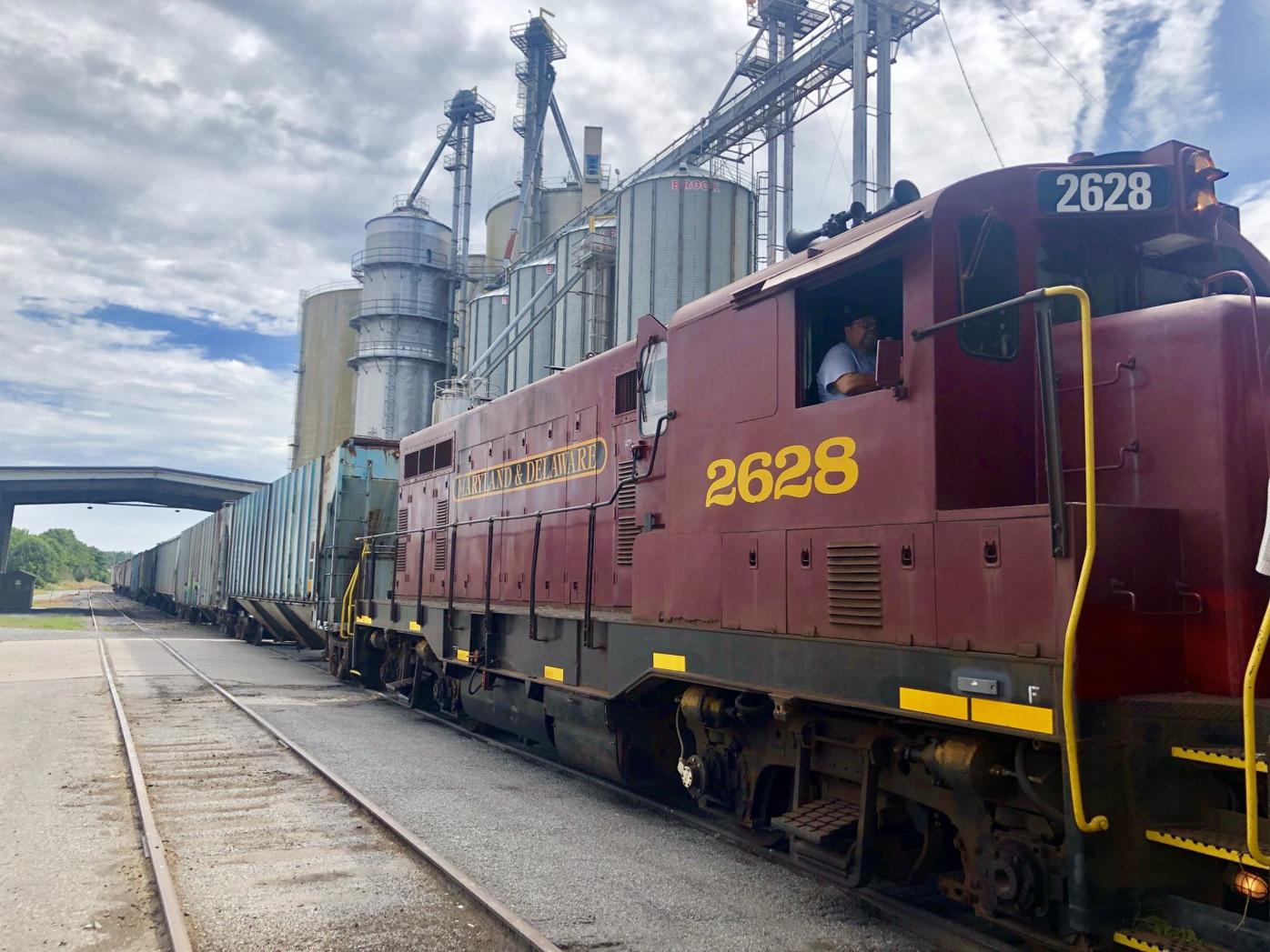 MDDE Engine 2632 arrives at Tyson Foods in Snow Hill with Supervisor of Locomotive Engineers Randy Rash in the cab.

Cathrin Banks is CEO and president of the Maryland and Delaware Railroad Company in Federalsburg.

One of the Maryland and Delaware Railroad Company’s six locomotives lumbers past a signal on the Mid-Shore.

As a Class III shortline railroad, The Maryland and Delaware Railroad Company ships freight on 120 miles of track on the Delmarva Peninsula.

In July, Cathrin Banks was named one of the railroad industry’s 2019 Rising Stars by Progressive Railroading magazine.

Locomotives 1202 and 1201 switch out cars on MDDE’s Centreville Line in Massey in December 2014. Rarely paired together, the venerable “RS3Ms” join forces a few times each year when freight demand warrants.

Over 50 people turned out to welcome the train back to Tyson’s in Snow Hill after five years without freight service. Cathrin Banks gave a quick presentation to town, county and state officials before the train arrived.

MDDE Engine 2632 arrives at Tyson Foods in Snow Hill with Supervisor of Locomotive Engineers Randy Rash in the cab.

FEDERALSBURG — In a crowd of people, you probably wouldn’t pick her out as the railroad executive.

But spend five minutes with Cathrin Banks, and you immediately understand why Progressive Railroading magazine recently named her one of the industry’s rising stars.

At 34, Banks is one of the youngest female CEOs in the railroad industry. Named president of the Federalsburg-based Class III Maryland and Delaware Railroad Company on January 1, the attorney has embraced her role.

In fact, shortly after she joined the shortline railroad four years ago as assistant general counsel, she said she “caught the bug.” Now she’s one of freight railroading’s biggest cheerleaders.

“It didn’t take me long to fall in love with railroading,” she told Progressive Railroading magazine. “I enjoyed learning about the intricacies of the railroad business and all of the industries we serve, and found my fellow railroaders to be a fantastic group of people to work with.”

“Along with my enthusiasm, my role with MDDE quickly grew from ‘just’ handling the legal work to working on virtually all aspects of the business,” Banks said.

The shortline railroad ships goods on about 120 miles of track on Maryland’s Eastern Shore and in Delaware. Its corporate headquarters are based in the historic Federalsburg train station. In the distance, freight locomotives whistle their arrival in town, and huge iron wheels rumble past Banks’s office.

Banks didn’t set out to be railroader. “My dad was the attorney for MDDE for about 40 years,” Banks said.

As chairman of the board and one of owners, Ed Banks “had been involved in the railroad forever. It was kind of always in my periphery.”“I had known (co-owner) John Paredes who was our president in the past — he has been with the railroad for almost 40 years as well — and (co-owner) Eric Callaway, who was the president before me,” Banks said. “So I’ve known them for a long time. They came to my high school graduation party and all those things. But I never really thought that I would work for the railroad one day. It just wasn’t on my radar.”

A graduate of James M. Bennett High School in Salisbury, Banks earned a bachelor’s degree in Government and Politics from the University of Maryland College Park, and a law degree from the University of Maryland School of Law.Before joining MDDE four years ago, Banks worked for Maryland Senate President Thomas V. Mike Miller Jr., Comptroller Peter Franchot, and the Hon. Albert J. Matricciani, Jr. of the Maryland Court of Special Appeals.

While she enjoyed preparing and trying cases, the work wore her down.“The nature of the cases I was working on — it just took a toll,” Banks said. “There were a lot of catastrophic injuries and products liability cases and medical malpractice. While they were fascinating and I was learning so much, it was always just something tragic and horrible that had happened to someone.”

“The nature of trial work and litigation is very antagonistic, and I just couldn’t see myself doing that forever, and I got kind of burned out. I thought, ‘Maybe I’ll just quit being a lawyer and I’ll be a yoga teacher, and just do that for a while,’” Banks said, laughing. Banks, with a few friends, had already founded donation-based Pop Up Yoga Baltimore.

“So at that time, my dad, who had had a law practice in Salisbury for many years, was looking to retire,” Banks said. “He had retired from his law firm some years before, but he was still handling the railroad business and a couple of other corporate clients, and he was busier than he wanted to be at that point in his life, and he said, ‘You know, why don’t you just try taking over this railroad work for me. I think you’ll enjoy it, it’s interesting, it’s varied. It’ll only be a part-time responsibility, and you can still teach yoga, still take on other clients if you want.’”

“That was in 2015, and that was a very interesting time for us here,” Banks said. “We were evaluating a couple of potential acquisitions and other transactions, and it was sort of like Railroad 101. I got to sit back here with Eric and John and (employee) Scott Harris, and we really just dug into it all, and it was fascinating to me. I just caught the bug.”

“So from there, I just progressed really quickly, and it became very much not a part-time job, and became very much a full-time job, and that led up to the decision to name me president,” Banks said. “It was obviously a huge honor and very exciting.””It was not at all a linear path or one that I expected to be on, but I couldn’t be happier with the way it’s all turned out, honestly,” she said.

“One of the best things is being able to work with my dad so much,” Banks said. “We were always close, but getting to work together professionally has added a whole new dimension.”

Born in Stuttgart, Germany, Banks has dual citizenship in the United States and Germany. Arriving in Salisbury when she was eight years old with her German mother Susanne and American step-father, attorney Ed Banks, and older step-brother Justin, she has no trace of an accent, but speaks German fluently when she flies back to Europe to visit her German father and family.

Banks considers herself a third-generation railroader. She proudly points to a framed document on the wall of her office which lists her step-grandfather Edward G. Banks as a fireman, or coal shoveler, with the Pennsylvania Railroad in 1945.

The railroad industry “is not this stale, old institution of our grandfathers,” Banks said. “I think it’s ever-changing and innovative, and I say that with the utmost respect for our grandfathers and everybody who built it into what it is, but I do say it’s an exciting and dynamic industry.””It’s a lot of fun and it’s a great business, and it’s very much vibrant and alive,” Banks said.

“The railroad industry is very important” to the Mid-Shore and wider Delmarva economy, Banks said. “Most of the customers that we serve could not exist here without the railroad. Dart Containers is one of our largest customers, and they’re also the largest employer in Caroline County (the last I checked they were). Rail service is an integral part of their manufacturing process. And I think that’s very true of most of our other customers, as well.”

“I think so many people don’t even realize how important railroads still are to how goods move from point A to point B in this country,” Banks said.”There’s a very good chance that something that you use today was touched by a railroad at some point in some way. Your car, for instance, and even the food that you ate. The feed ingredients that fed the chicken that I had for lunch on my sandwich probably were transported on a railroad,” she said.

In addition to serving on the board of directors of the Women’s Law Center of Maryland, Banks is a member of the League of Railway Women. She wants to become more active in that group.

Banks is looking to the future for other projects as well. “I would like to get my conductor’s certification at some point,” she said. “I went to bridge inspector training earlier in the summer in Knoxville, and that was really cool. The more that I learn about the actual operations, I think the better I will be at my job.”

Although MDDE is mainly a freight shipper, the company lends a locomotive and crew to hook up to Hurlock’s two passenger cars for the town’s Fall Fest excursions. A project she hopes to launch next year would transport passengers on seasonal or themed trips between Snow Hill and Berlin in Worcester County.

In the meantime, Banks lives in Salisbury with her Corgi mutt Winston, spending “as much time as I can with my boyfriend and family,” she said. Banks’s boyfriend Matt Gedney works for the Gulf and Ohio Railways, five shortline railroads based in Charlotte, N.C.

With three daily direct flights to Charlotte from Salisbury, “We are their best customers,” Banks said, laughing. “It works out pretty great.”

“I have found that the railroad industry is full of really salt-of-the-earth, great people, and everybody always likes to share their knowledge and their expertise and their war stories occasionally, but that’s okay — I like hearing those, too,” Banks said.”The railroad is a really important part of the economy here,” Banks said. “We love doing what we do. It seems like most people enjoy seeing the train come through town, and hearing the whistle. There’s something about trains that intrigues people or fascinates them. It’s hard to put into words, but I think we all kind of feel it.”

To learn more about the Maryland and Delaware Railroad Company, visit www.mdde.com.