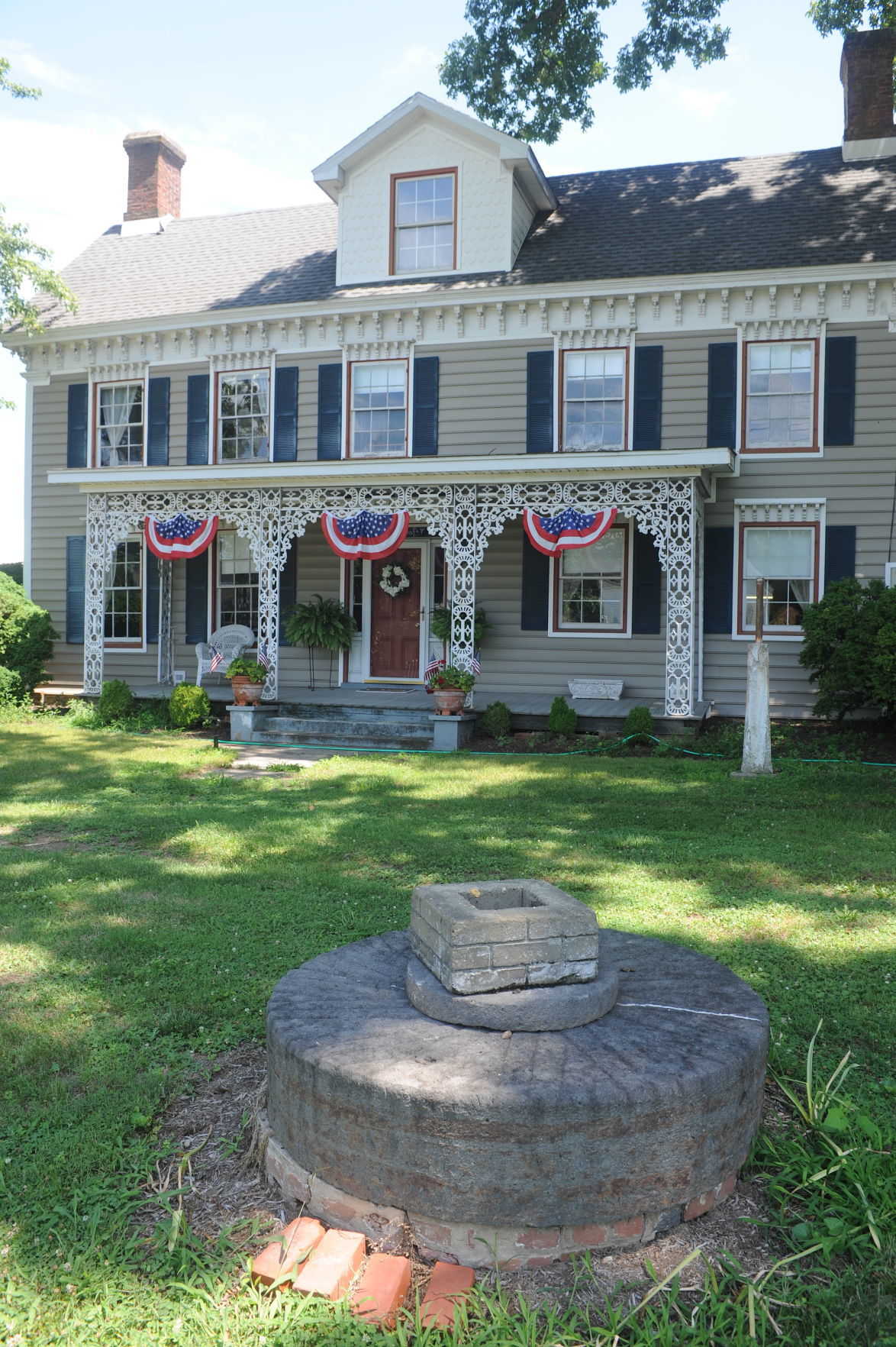 A massive millstone adorns the museum’s front yard. The Victorian house, in downtown Preston, was built in 1833 and is called the Noble House. 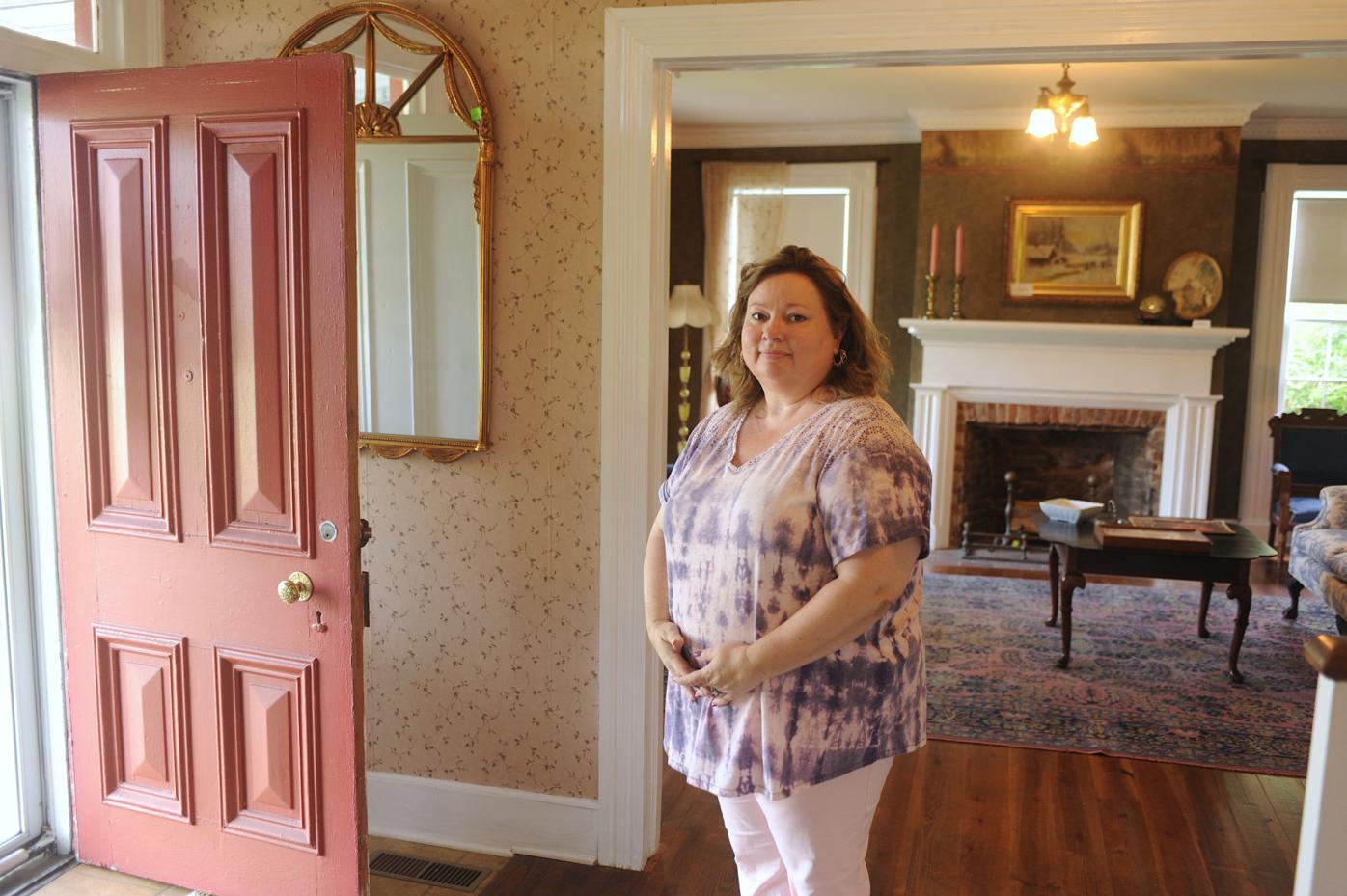 Tammy Coulbourn is a board member at the Preston Historical Society. Their Museum at 167 Main Street in Preston is chock full of memories and serves to record Preston’s history. 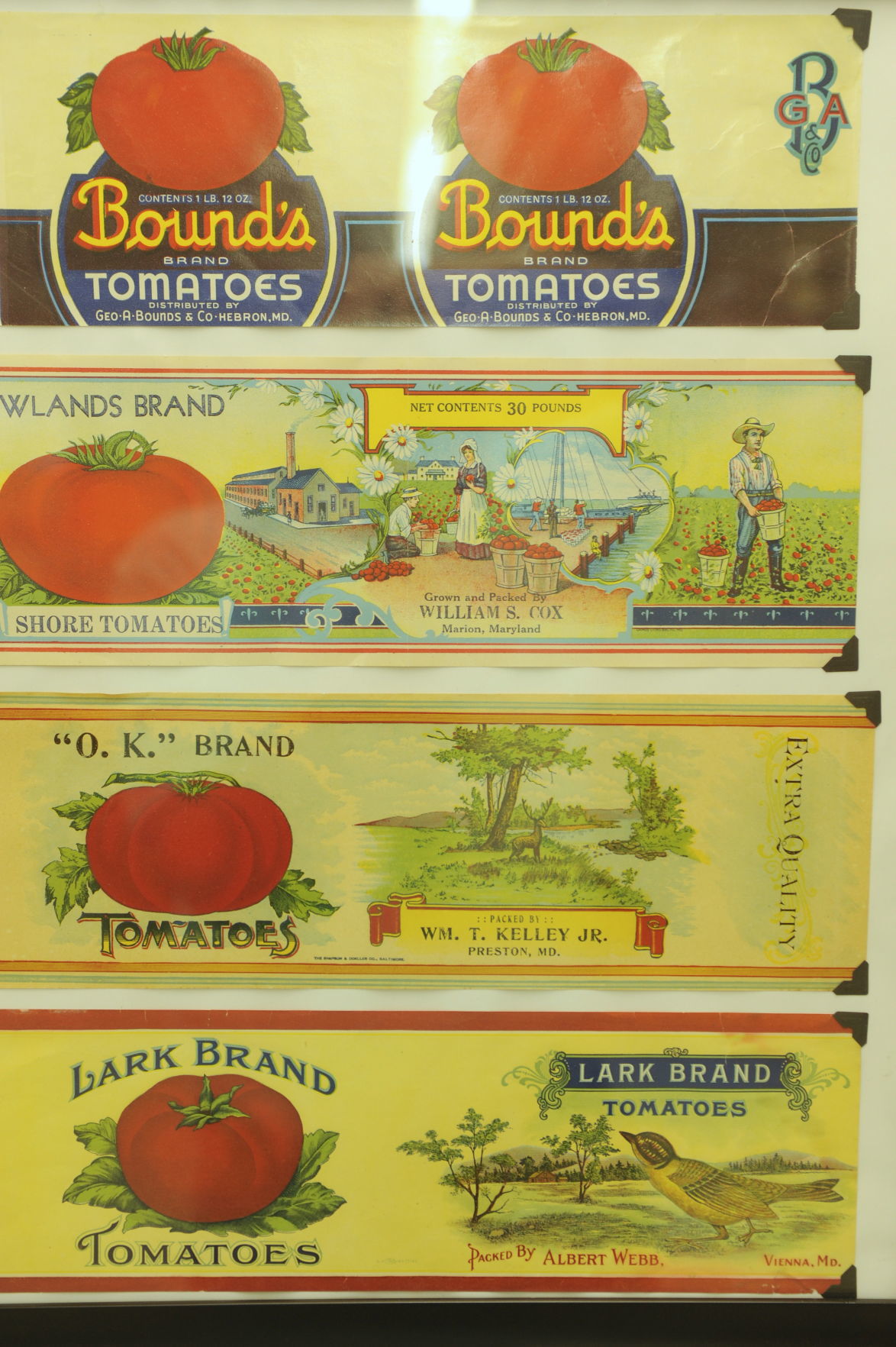 When canning was king, Preston was one of the biggest canning communities in the country. The museum has a whole section devoted to the history of canning tomatoes. This is how Preston Trucking got its start. 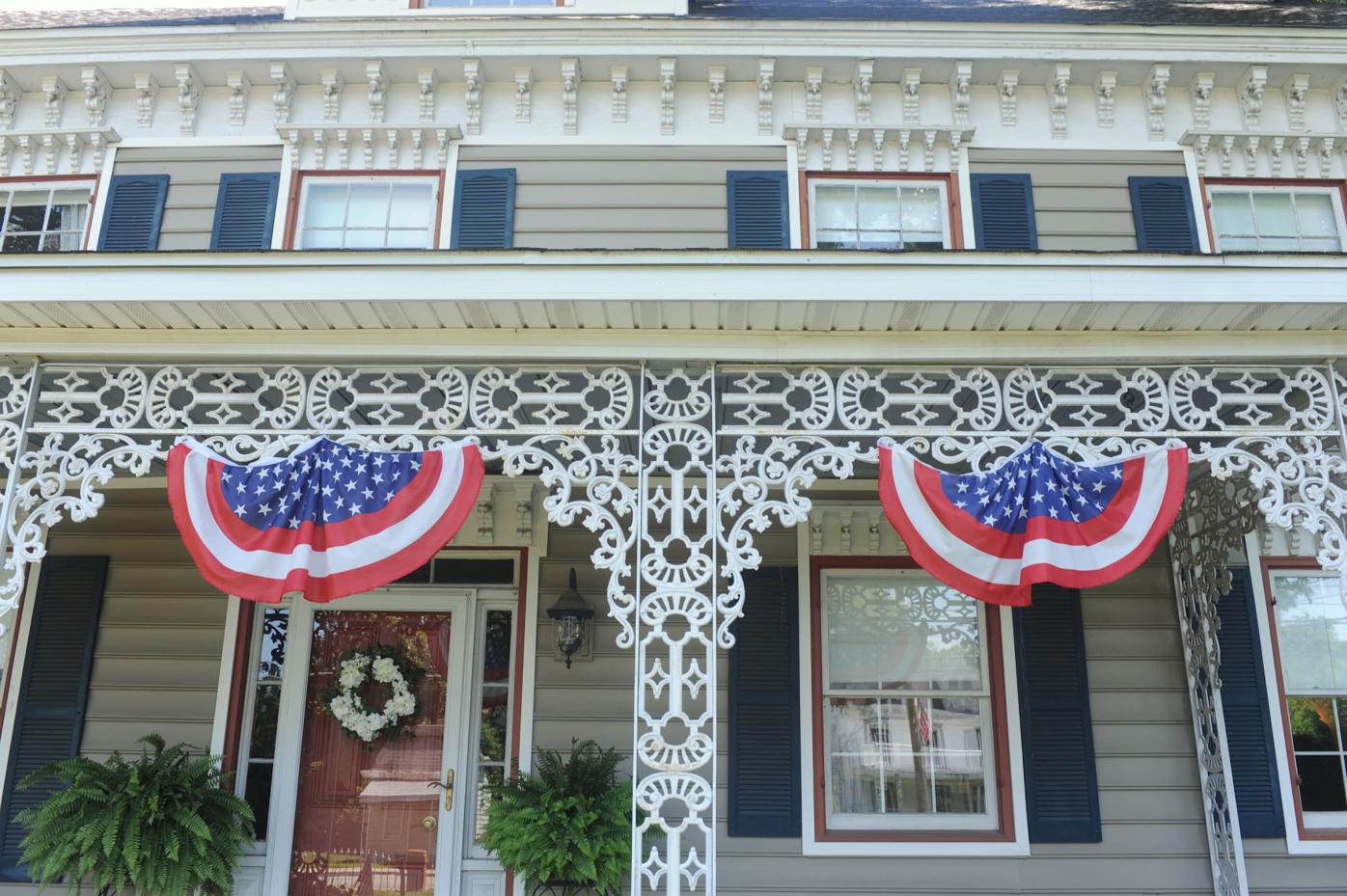 Some Victorian details of the Noble House at the Preston Historical Society Museum.

A massive millstone adorns the museum’s front yard. The Victorian house, in downtown Preston, was built in 1833 and is called the Noble House.

Tammy Coulbourn is a board member at the Preston Historical Society. Their Museum at 167 Main Street in Preston is chock full of memories and serves to record Preston’s history.

When canning was king, Preston was one of the biggest canning communities in the country. The museum has a whole section devoted to the history of canning tomatoes. This is how Preston Trucking got its start.

Some Victorian details of the Noble House at the Preston Historical Society Museum.

PRESTON — The Preston Historical Society Museum has something for everyone. It is like going into your grandmother’s attic and finding treasures from back in the day — old shoes, a fancy pump organ, colorful labels from the canning of tomatoes. There are mysterious Masonic ritual items that look like clubs. Old newspapers from 1866 and a soapbox derby mini car. You can imagine the flappers dancing to Glen Miller and drinking prohibition hooch.

If you want to learn about canning, farming in the 1920s, trapping for muskrat or the huge success and ultimate demise of Preston Trucking, then this chock full museum is for you. The Preston Historical Society has curated curios and collected written remnants. The museum’s focus is on Preston, Tanyard, Linchester, Harmony and Jonestown.

“Really, you need to come to the museum twice to get it all,” said Tammy Coulbourn. She is a member of the Preston Historical Society Board of Directors. The museum will reopen to the public on July 18. The museum will be open Saturdays from 10 a.m. to 2 p.m. through the summer and fall. They close down for the winter because it is too costly to heat.

The Noble House is where the museum is located. It used to be the home of a doctor who treated people there. A corner of a room is dedicated to his medical practice. There is an old fashioned obstetrics table complete with two stirrups.

“We are indebted to a lot of people who donate items, and others donate their time. As a society we are most appreciative,” she said.

“We got a grant from the Women’s Club of Caroline County for archival materials. It was $125 — every little bit counts. We raise money through fundraisers. The last cash bingo we did raised $800. We sell postcards and have a bake sale. We are a 501c3,’ Coulbourn said.

“We got a grant from Choptank Electric. Our grant writer is Angela Rieck,” she added.

There are 140 members of the museum. Individuals can become a member for a $50 donation. Lifetime memberships go for $500. The museum has four other board members. They are Larry Milburn, Sam Fairbank, Gail Karge and Troy Brooks.

“The one thing we need is younger people to get the history bug. We need young blood. How do you spark interest?” Coulbourn said.

Every year the museum has fourth-graders come to visit the museum. “We would love to have a younger crowd. When the fourth-graders come, we split them into two groups. One inside does a scavenger hunt. The outside group plays games from 1800s, because our building is from 1833. They play marbles, hopscotch and jump rope,” said Linda Fletcher, former board president.

As far as tourism, the historical society is trying to move from old typewriters to the internet. “We have a Facebook page and an Instagram account. I post weekly, and we have throwback Thursdays,” Coulbourn said.

It really helps bring the people in when they feature a speaker. “We can attract 50 to 100 people,” Fletcher said. Her favorite object in the museum is her brother’s high school letter sweater. “He died in a car accident at 19,” she said.

The museum tells the story of the south — work, family, church and community and quilt work.

In 1895, there was a murder of a 13-year-old girl. The man who did it was caught and lynched. “It was unusual to have a white man lynched,” she said.

Another corner of the museum tells the story of swan-necked Jean Patchet, who was a great beauty. She appeared on the cover of Vogue and was an Eileen Ford model. In the ’50s The Ford Agency was one of the most powerful influencers of fashion in the world. Jean Patchet was born and raised in Preston.

Whether it is fish, fin or feathers, the museum has it. “Muskrat trapping used to put food on families’ tables. And we have a boat that was used for gill net fishing around Dover Bridge,” Fletcher said.

Canning was king and tomatoes grew very well in Preston soil. At first it was the railroad that moved the produce, and then it was trucks. AW Sisk and Son shipped the cans. The company has been in business for over 115 years. Their tomato labels tell a story of hard work through time.

“At one time Sisk and Sons was the largest canning brokerage in the world. That is how Preston Trucking got started,” Fletcher said.

This museum is alive with the power of storytelling. Looking into the eyes of someone in a black and white photo from 100 years ago is a stirring experience. What were they thinking as they stood next to the railroad track? Who were they waiting for? If you look real close, you can hear that train whistle blowing.