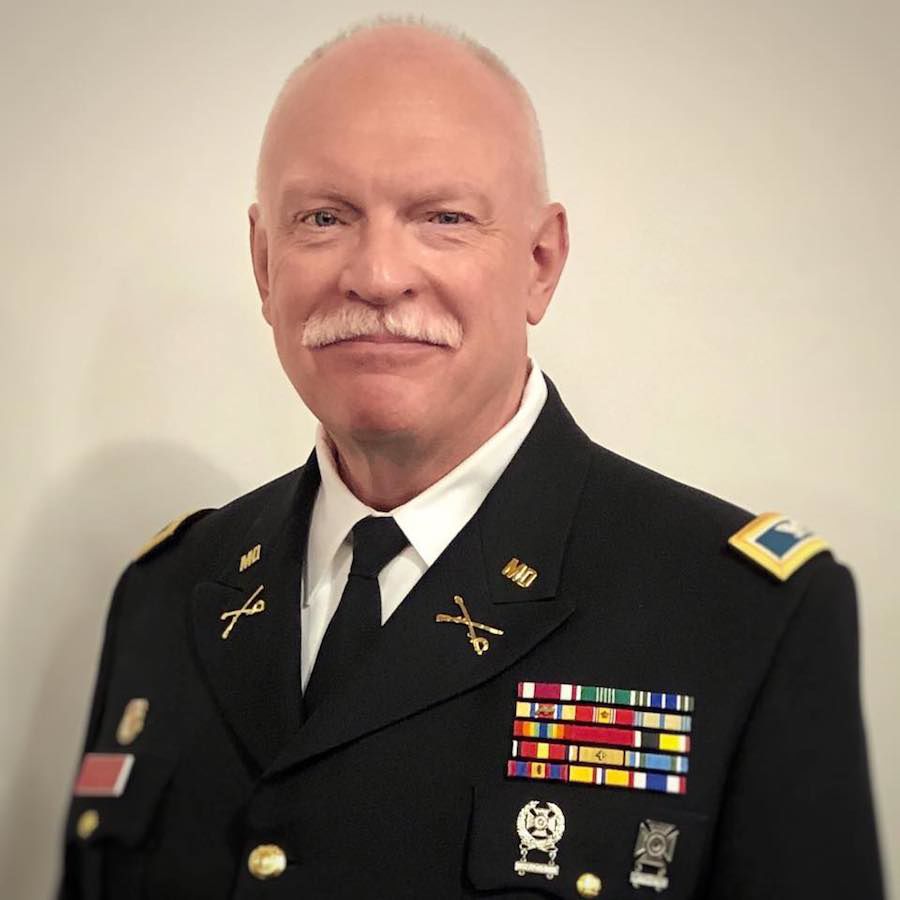 Dr. Christian Jensen receives the Quilt of Valor, Dec. 12 during a ceremony at Goldsboro Volunteer Fire Company in conjunction with Wreaths Across America. 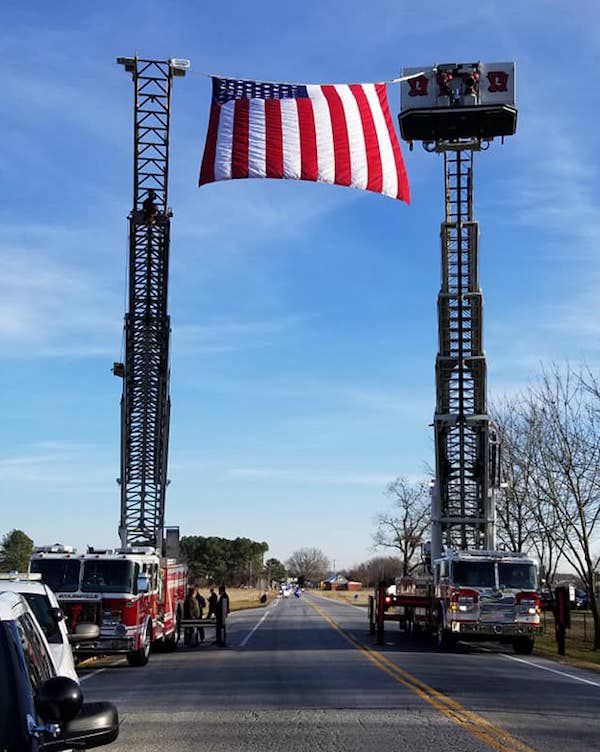 Preparing to welcome the Wreaths Across America convoy to Goldsboro. 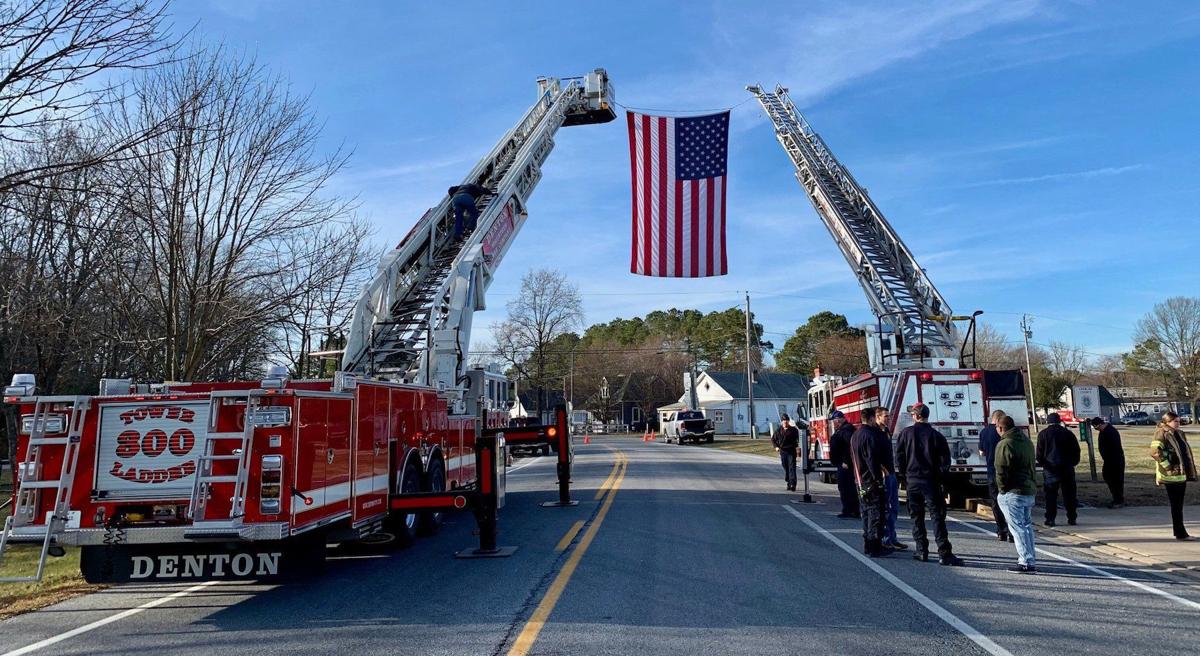 Trucks raise the flag in preparation of welcoming the Wreaths Across America convoy to Goldsboro. 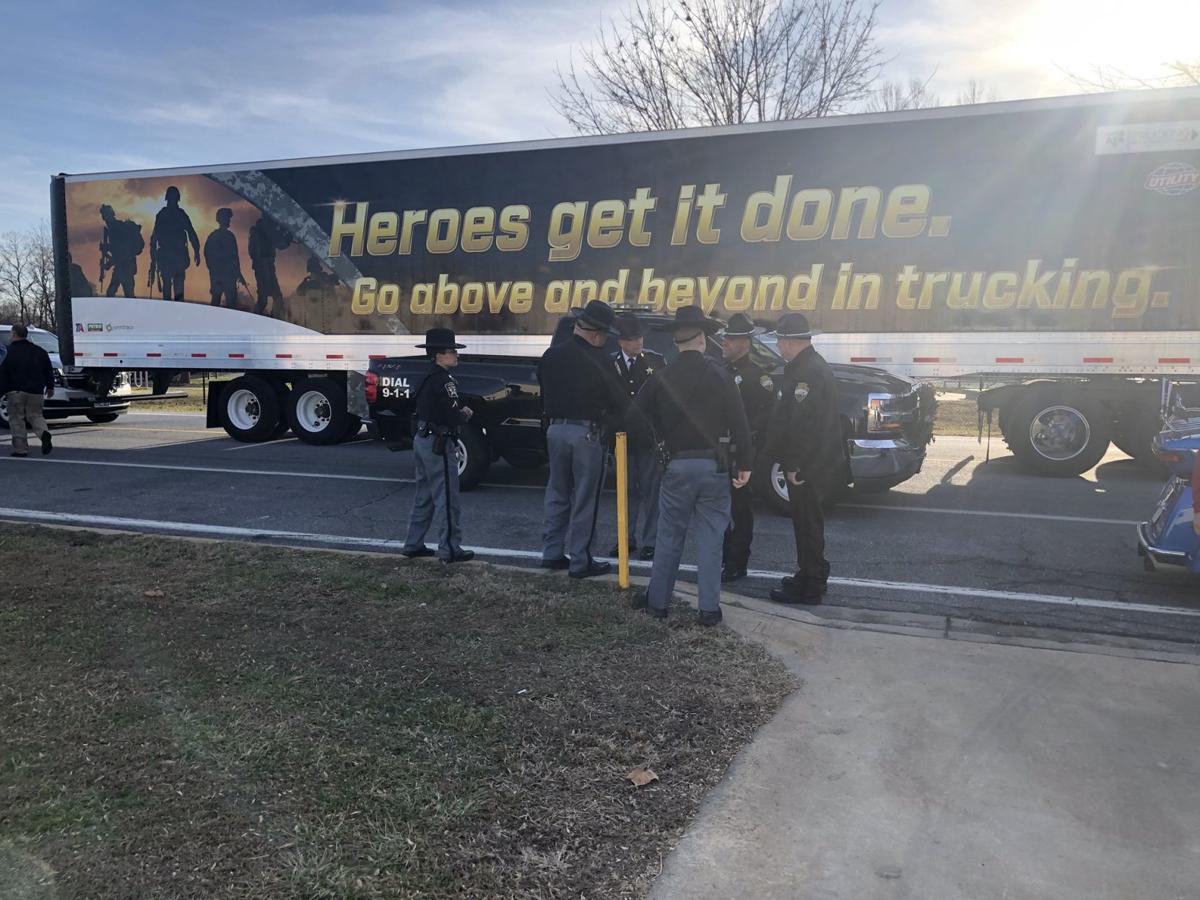 One of several tractor trailers, part of the Wreaths Across America convoy, accompanied by Maine State Police, arrives in Goldsboro.

Dr. Christian Jensen receives the Quilt of Valor, Dec. 12 during a ceremony at Goldsboro Volunteer Fire Company in conjunction with Wreaths Across America.

Preparing to welcome the Wreaths Across America convoy to Goldsboro.

Trucks raise the flag in preparation of welcoming the Wreaths Across America convoy to Goldsboro.

One of several tractor trailers, part of the Wreaths Across America convoy, accompanied by Maine State Police, arrives in Goldsboro.

GOLDSBORO — Wreaths Across America, the organization that places wreaths nationwide each year on the graves of veterans, made a visit to Goldsboro Volunteer Fire Department, Dec. 12. It was the first time the convoy of tractor trailers and more than 200 volunteers, blue and gold star families from Maine on their way to Arlington had stopped in Caroline County.

For members of the Goldsboro Volunteer Fire Company, they said it was an honor to be chosen as a stop on their journey to Arlington National Cemetery. Each year the fire department participates in laying wreaths at the cemetery in Greensboro. When the organization stopped in Goldsboro they made special presentations to Dr. Christian Jensen and Claudine Daisy Ingersoll McClyment, counted among those knows as “Rosie the Riveter’s”.

Don Jones, a native of Greensboro, spoke of his mother McClyment who earned the honor when she went to work for the Glenn L. Martin Aircraft Company in Middle River, Md — a few miles away from where they lived then in Essex, just outside of Baltimore. She worked, said Jones, with a team of men on the Martin PBM-5 Mariners, the long range submarine hunting seaplanes and the Martin B-26 Marauder medium bombers.

One of the notable things she and a fellow worker did, was devise a method of stopping leaks around the windows of the seaplanes, the water from these leaks clouded the instruments and caused corrosion, which, in turn led to inaccurate readings. Said Jones, “during their lunch breaks, my mother and her co-worker used felt, rubber strips and broken hacksaw blades, to make a crude fix that was formalized and then installed in later aircraft, that stopped the water from getting to the instruments and the problem went away — a small contribution to the war effort, but an important one to those flying at night or in bad weather.”

Jones said his personal heroes (including his mother) were men who lived, at least a part of their lives, here in Caroline County. His brother, Larry McClyment, served with the Coast Guard in Viet Nam, running un-named teams up the Mekong River in small boats. His step-father, Charles “Buck” McClyment, served in France and Germany during World War II with the 11th armored division (the “Thunderbolt” Division) of Gen. Patton’s 3rd Army. He arrived in Normandy about four days after D-Day, when the tanks could get ashore on the man-made harbor.

1944 in Normandy — the first to hit Omaha Beach on D-Day, with units of the 2nd infantry division.

Then, Jones’ grand-father, Claude Lexington Ingersoll, he gave an incorrect date of birth to join the Navy in World War II, said Jones, most who gave the wrong age to enlist were too young, my grand-father was too old.

“I think we all have heroes. mMany are not with us now, but by seeing this convoy filled with wreaths of thanks, hopefully they and the part they had in the fight for freedom will long be remembered,” concluded Jones.

Denton’s Dr. Christian Jensen, known by many for his years of service as a local physician was awarded the Quilt of Valor, as part of the ceremony on Dec. 12. Jensen was commissioned as an Ensign in the Navy on a ship that evacuated UN Truce Observers from Gaza during the Suez War. Later, as a reservist Jensen served on the staff of Commander Eastern Sea Frontier in Manhattan planning convoys to resupply forces in Europe should the Cold War lead to a larger war with the Soviet Union.

Jensen would earned his degree in medicine and would later serve as a doctor for Portsmouth Naval Hospital before moving Denton. Remaining active in the reserves, he was Commanding Officer of five medical units including Bethesda, Annapolis, and Norfolk. He was promoted to Commander and then Captain.

Jensen would be recalled to active duty as Chief of Ambulatory Medicine during Desert Storm and says he served his time at “Scud Alley” after returning he was ordered to the Naval Academy where he served two terms as Chief of Medical Staff. After retiring from the Navy, Jensen joined the Maryland Defense Force, an unpaid volunteer force, as a physician and was for a time, he says, State Surgeon. “If one counts the two years I spent in the Air Force ROTC, I was in the uniform of my country for over 64 years,” he said.

Jensen began private practice in the county in 1971 and his well known by those in the area for providing a multitude of services to many of its residents. He was also the physician for the county jail for 31 years – a job that was a real test of his skills and heart as a doctor and human being, he said. His goal was to never risk a prisoner’s health, and never waste a nickel.

He now says he owes everything to “my Lord who gave me the health and strength to do it all, and the wonderful wife who was behind me...through it all.”

After leaving Goldsboro, the contingent of volunteers continued on to Arlington National Cemetery where they would lay wreaths on Dec. 19 in conjunction with 2,100 additional sites performing the ceremony nationwide.

In many homes, there is an empty seat for one who is serving or one who made the ultimate sacrifice for our country. There is no better time to express our appreciation than during the hustle and bustle of the holiday season, says the foundation, we will never forget.