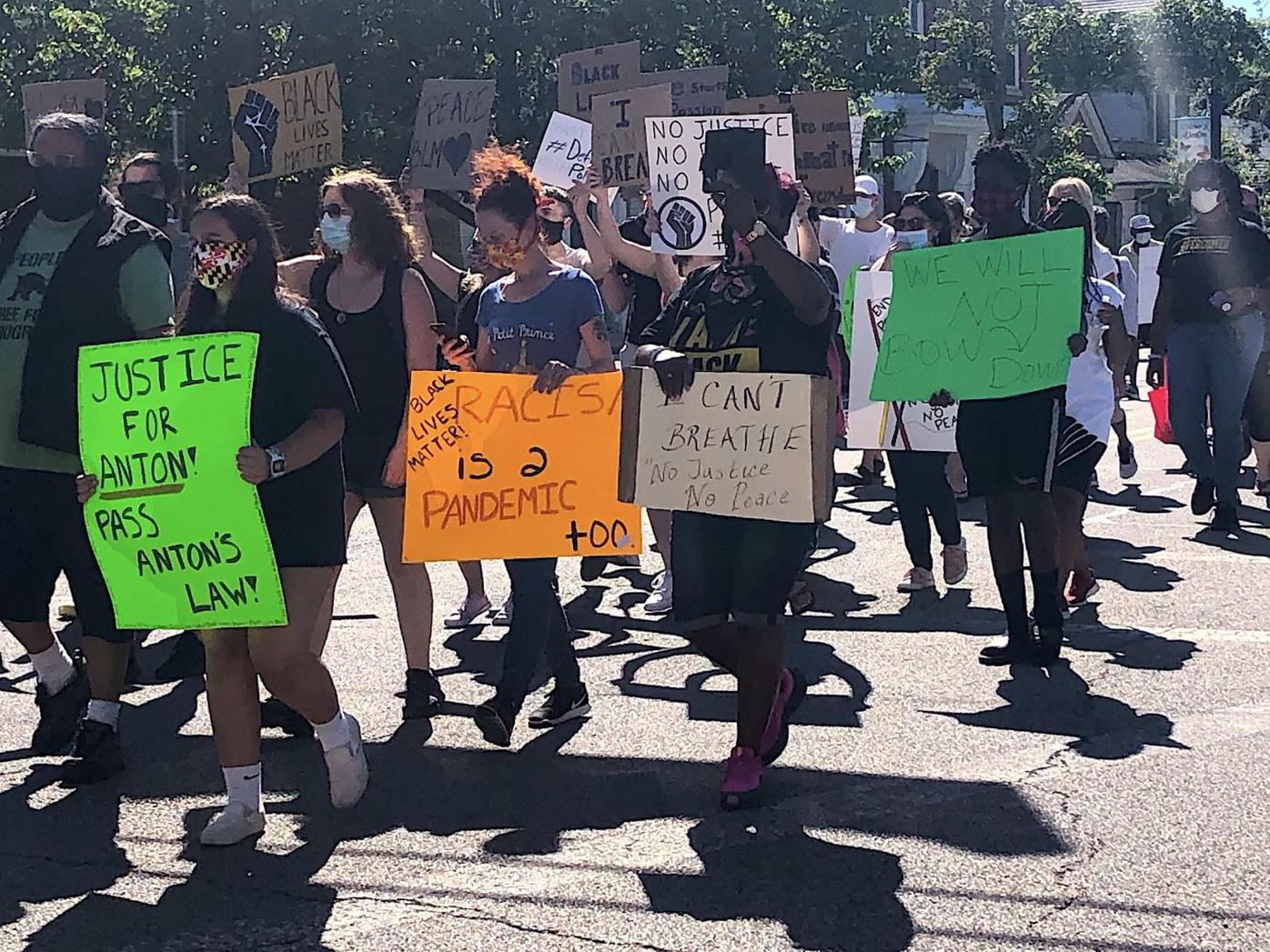 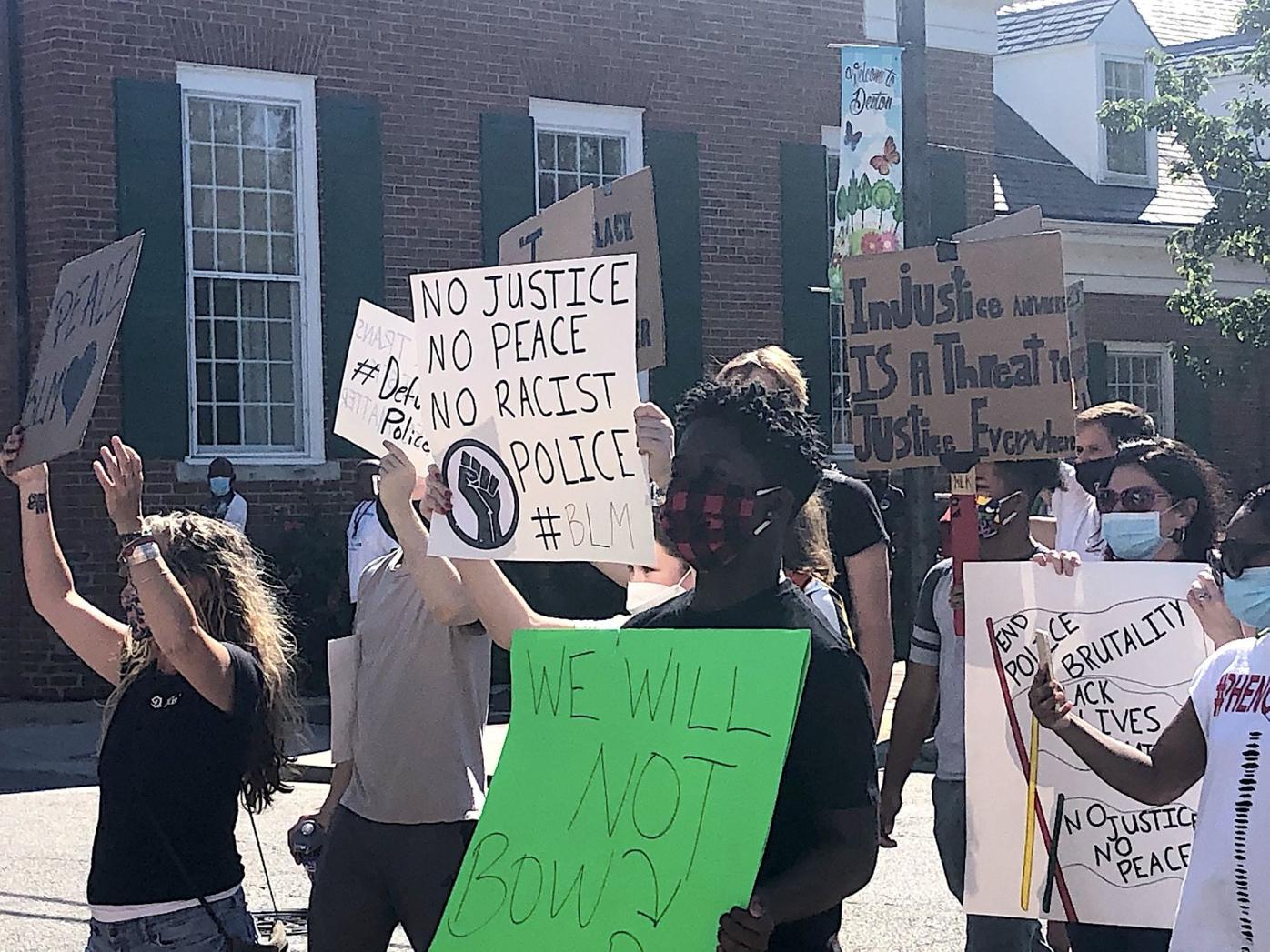 “No justice, no peace. No racist police,” proclaims one protester. 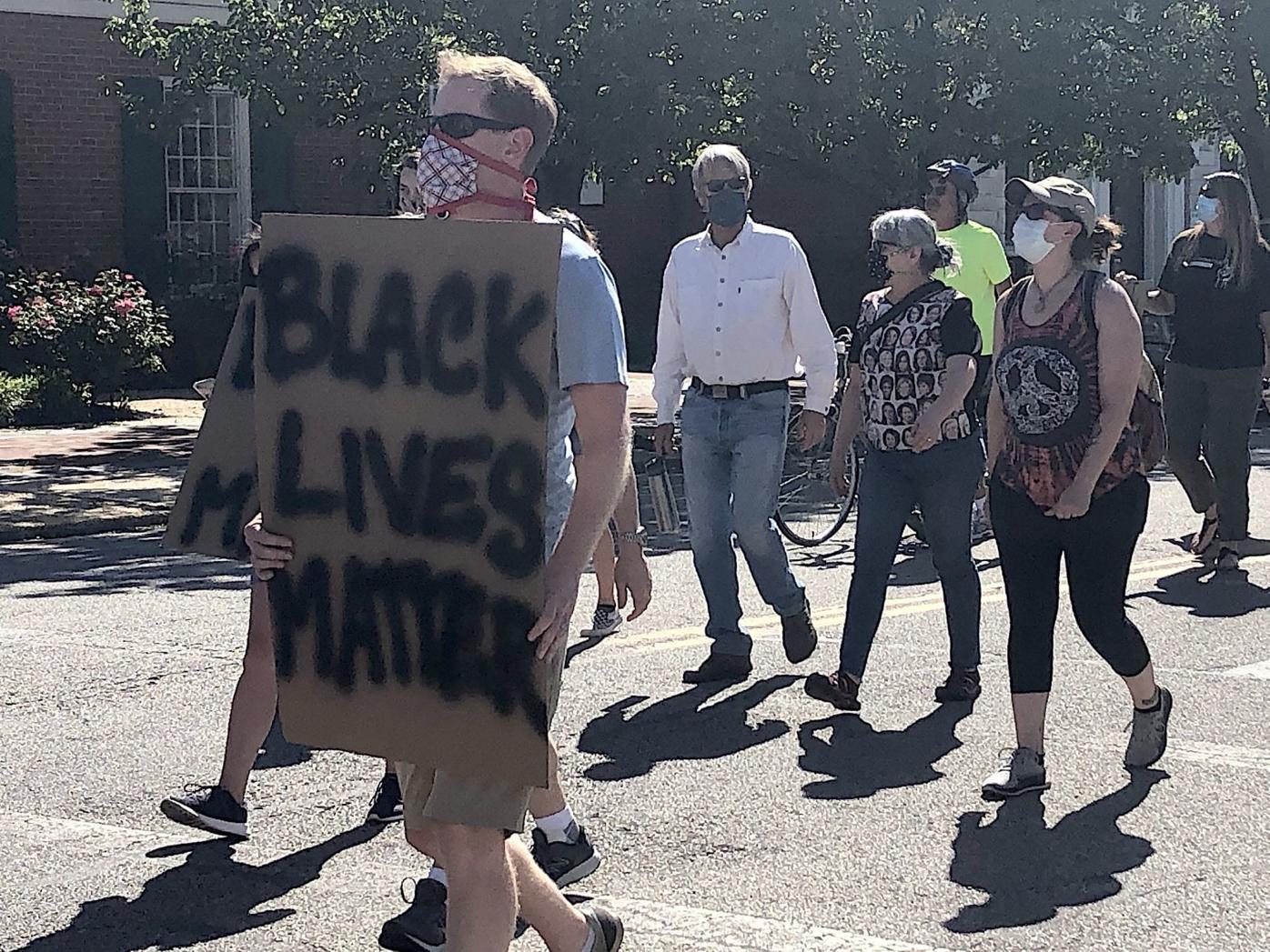 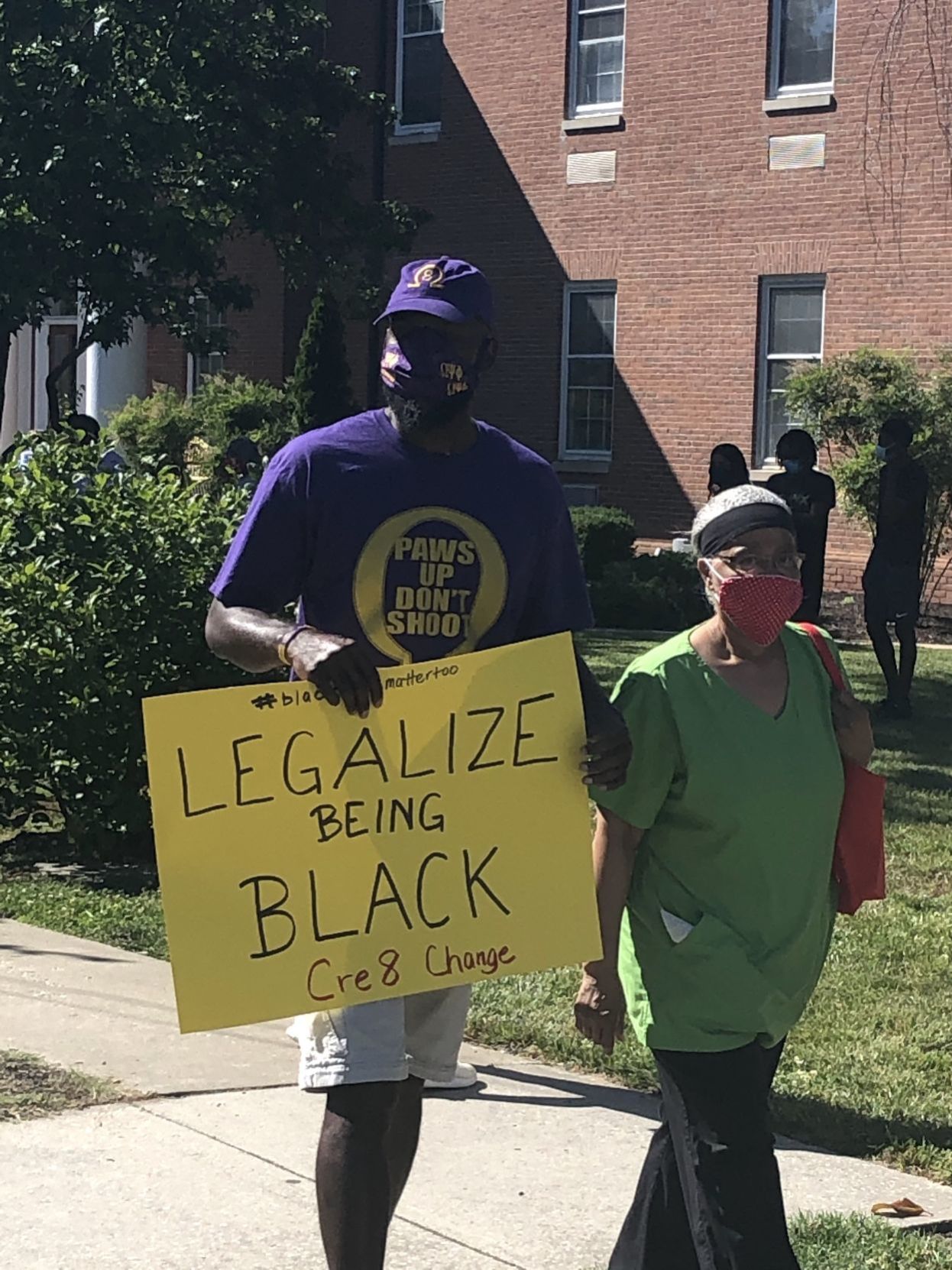 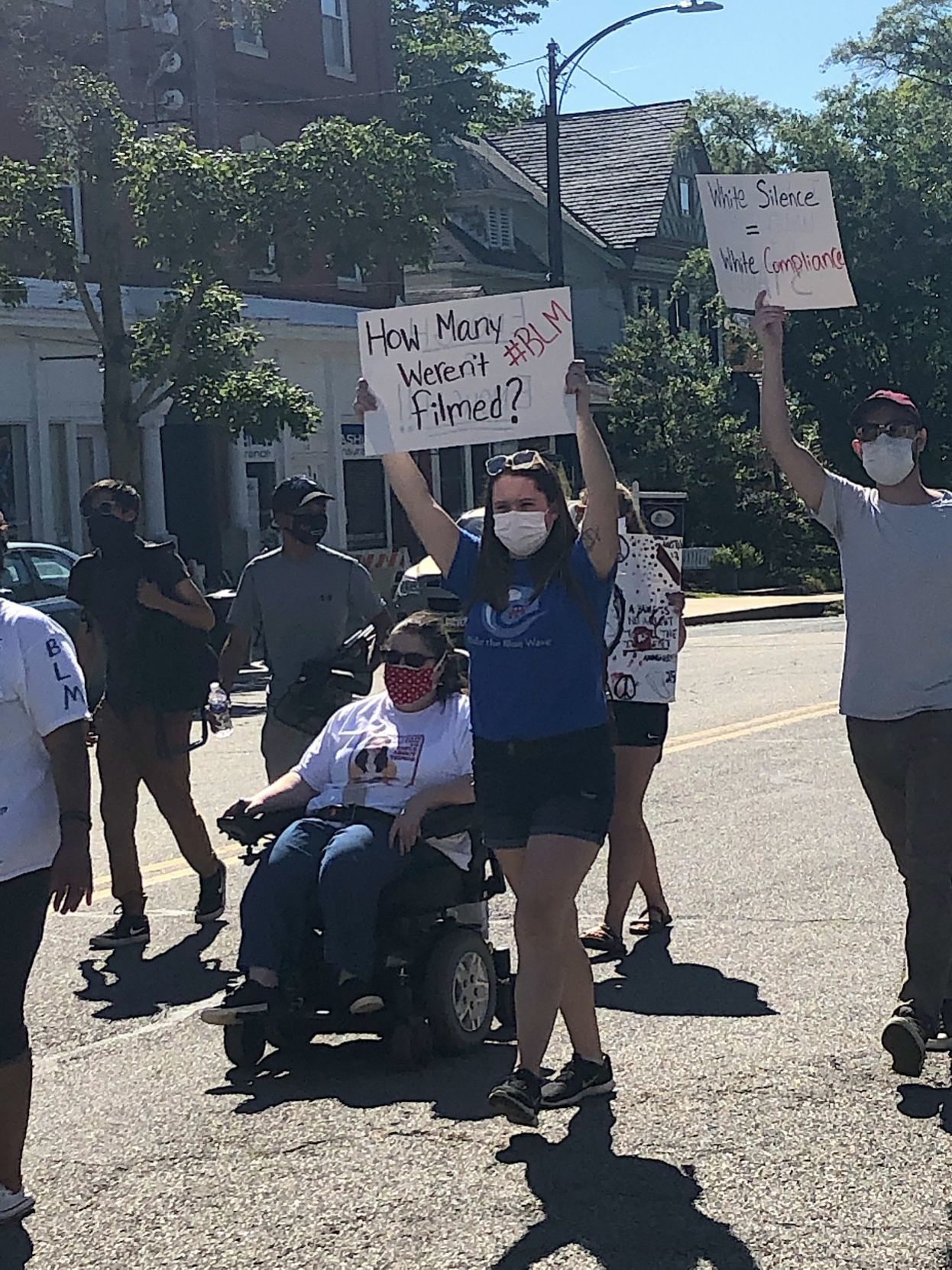 A group of protesters marches down the side of Market Street in Denton. 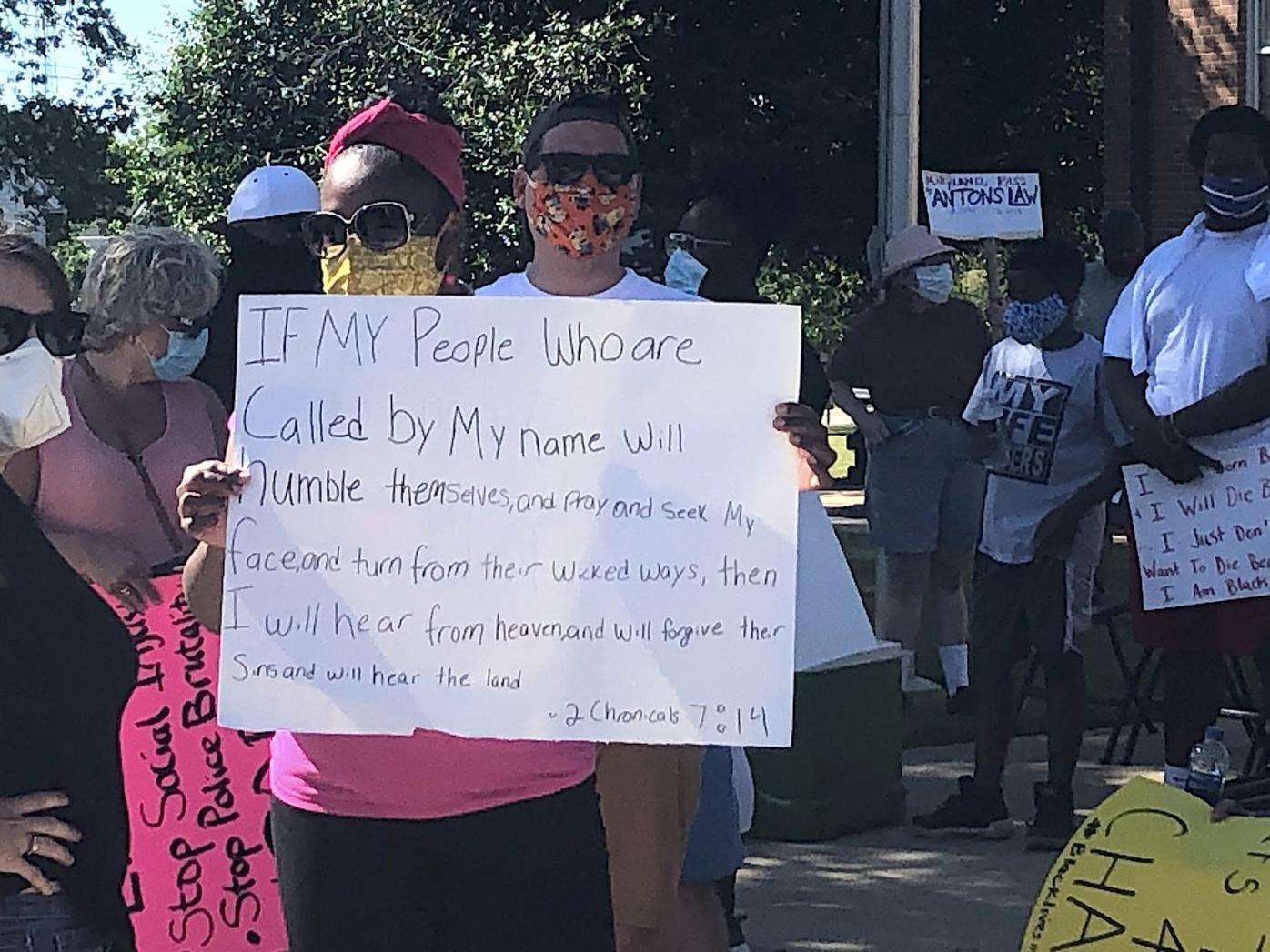 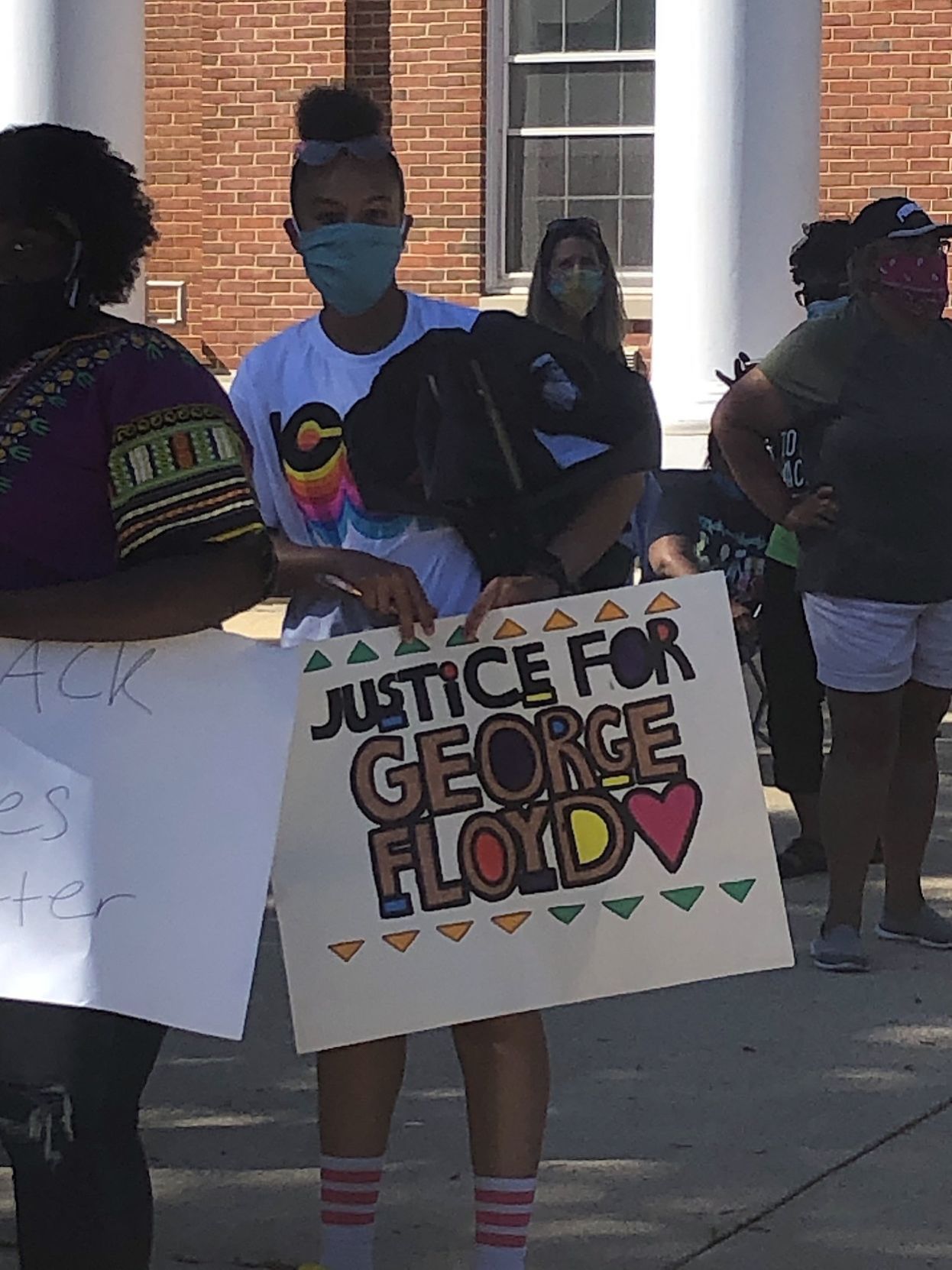 “Justice for George Floyd” was a common refrain during the rally held in Denton on June 8. 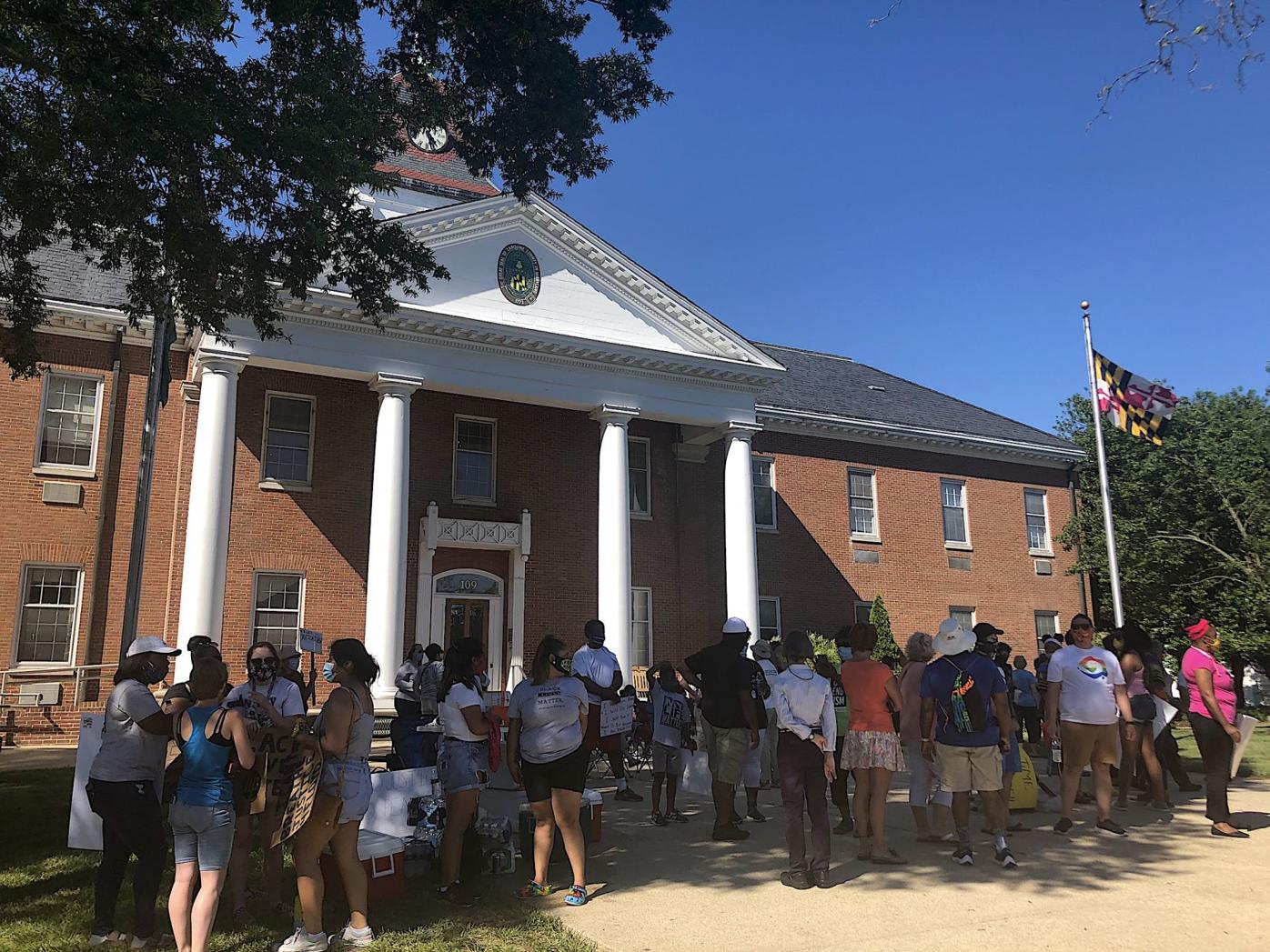 “No justice, no peace. No racist police,” proclaims one protester.

A group of protesters marches down the side of Market Street in Denton.

“Justice for George Floyd” was a common refrain during the rally held in Denton on June 8.

DENTON — “Justice for George Floyd” was the central theme for the peaceful protest, Monday, June 8 in front of the courthouse in Denton. Organizers posted on social media ahead of the protest encouraging a safe and peaceful assembly. Ryan Haynes, a graduate of Colonel Richardson High School and Caroline County resident, helped coordinate the event, alongside Shania Garcia-Herrera and Davonte Douglas.

Watching other communities engage in protests addressing racial injustice, Haynes said she felt motivated to do something within Caroline. So many friends and others quickly joined in to help, she said. Her hope is the protest will help raise awareness and create an opportunity for more to learn and pay attention to these issues, in turn impacting legislative change.

The county approved the event ahead of Monday and instructed protestors to stay on the sidewalks to express their constitutional rights. Lt. George W. Bacorn, Jr. Deputy Chief of Denton Police said their goal was to help everyone stay safe. DPD also coordinated with the Caroline County Sheriff’s Office.

Garcia-Herrera, from Caroline County and a senior in college said they wanted to help start a movement here on the Shore. She was impressed, she said to see the overwhelming support at the previous two rallies in Easton. If we take the initiative now, imagine what we can do, she said.

Police brutality is an issue here and from testimony here in the community, there have been issues with the police, she said. The event came together quickly as three reached out to friends and acquaintances on social media and sought the proper permits through the county and town.

We were a little nervous about what to expect, said Garcia, but what we know we want is to have more dialogue and a safe space to make plans on how to change (police violence) so it doesn’t happen again. Garcia said they don’t just want the movement to end when people leave the protest and go home.

Garcia who is a double major in government politics and criminal justice and also an executive member of her school’s NAACP branch said she would like to see more transparency from the county on how budget dollars are spent and specifics on how funding is utilized by the corrections center and law enforcement. She also hopes to help businesses owned by people of color and to form a community that is inclusive of those businesses and those that support them.

“We want the movement to keep going — keep moving forward,” she said.

The idea started with a tweet that Caroline County needs a protest — one that remains peaceful and legal, said organizer Davonte Douglas. We wanted to get the word out about things in the community we see can be changed, beginning with police reformation and with national attention on the subject now is the time to do that, he said.

For Douglas and one of his colleagues there have been small instances where they were both misjudged based on the color of their skin — assumptions were made, he said. One younger man recounted being pulled over for being in excess of the speed limit by 4 mph, “I was asked to get out of my car,” he said, “and the police (officer) did seem to be a little twitchy around me.”

Although the conduct of law enforcement officers is being highlighted right now, both men agreed that racism even if not blatant is salient in Caroline County. It is seen at the local level in politics and in the educational system and curriculum, he said.

“It worries me as a young African American male what could happen,” said Douglas, “This is not just an issue that black people are facing and not just an issue caused by white people — these are issues affecting all of us.”

On June 8, 2020 a peaceful protest was held in front of the Caroline County Circuit Court House, beginning at 4 p.m. and scheduled to end at 6 p.m. The protest was aimed at bringing attention to the death of George Floyd and other black lives lost due to police violence. We estimate that as many as 200 people attended the event and all participants were respectful and courteous, said Lt. George Bacorn, Deputy Chief of Police for Denton PD. At one point during the protest an impromptu march began which ran east on Market Street to 6th Street to Gay Street and back to the Court House. Denton Police Officers provided traffic control for the group to ensure their safety during the march.

Caroline County Sheriff Randy Bounds said, “I join the country in extreme sadness and bitter frustration in the death of George Floyd. I firmly believe that those who commit crimes, especially violent crimes, should be held accountable for their actions and prosecuted to the fullest extent of the law. Police officers who violate their entrusted role through illegal actions or abuse of authority are no exception.”

Both the Denton Police Department and the Caroline County Sheriff’s Office extended their thanks to the organizers and participants for their cooperation during the event.