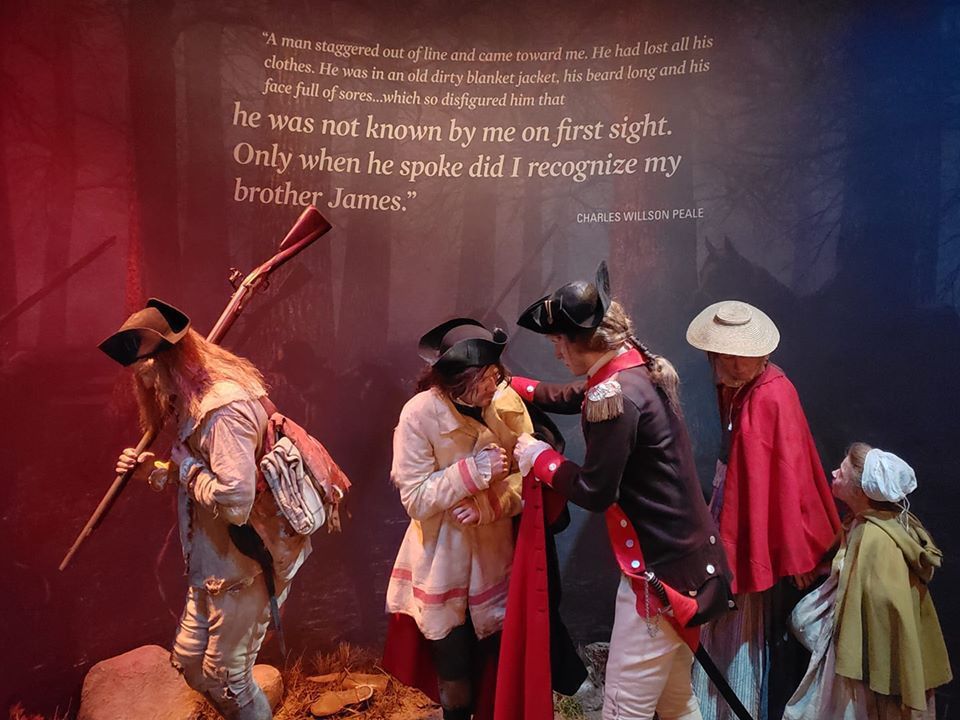 The Peale display at the Museum of the American Revolution in Philadelphia. 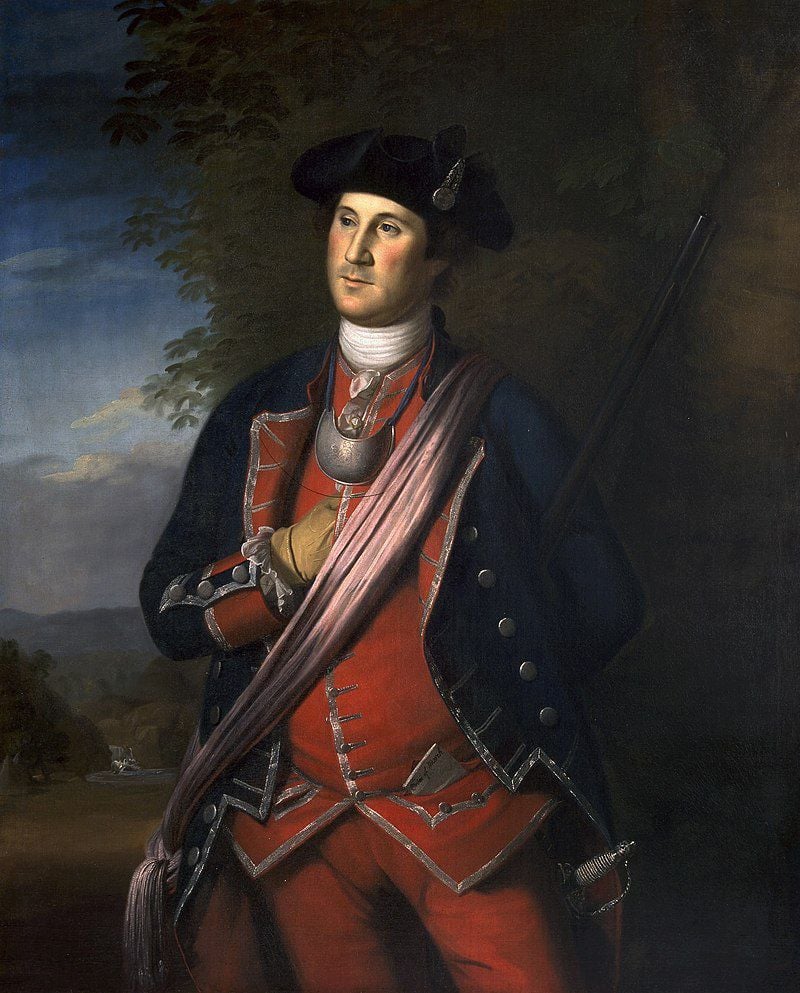 Charles Peale’s first portrait of George Washington, property of Washington and Lee University in Lexington, Va., is on display at Mount Vernon. This 1772 piece is the earliest known portrait of Washington. ON THE COVER: Peale’s painting of Washington, the Marquis de Lafayette and Talbot County native Tench Tilghman at Yorktown hangs in the Maryland State House. 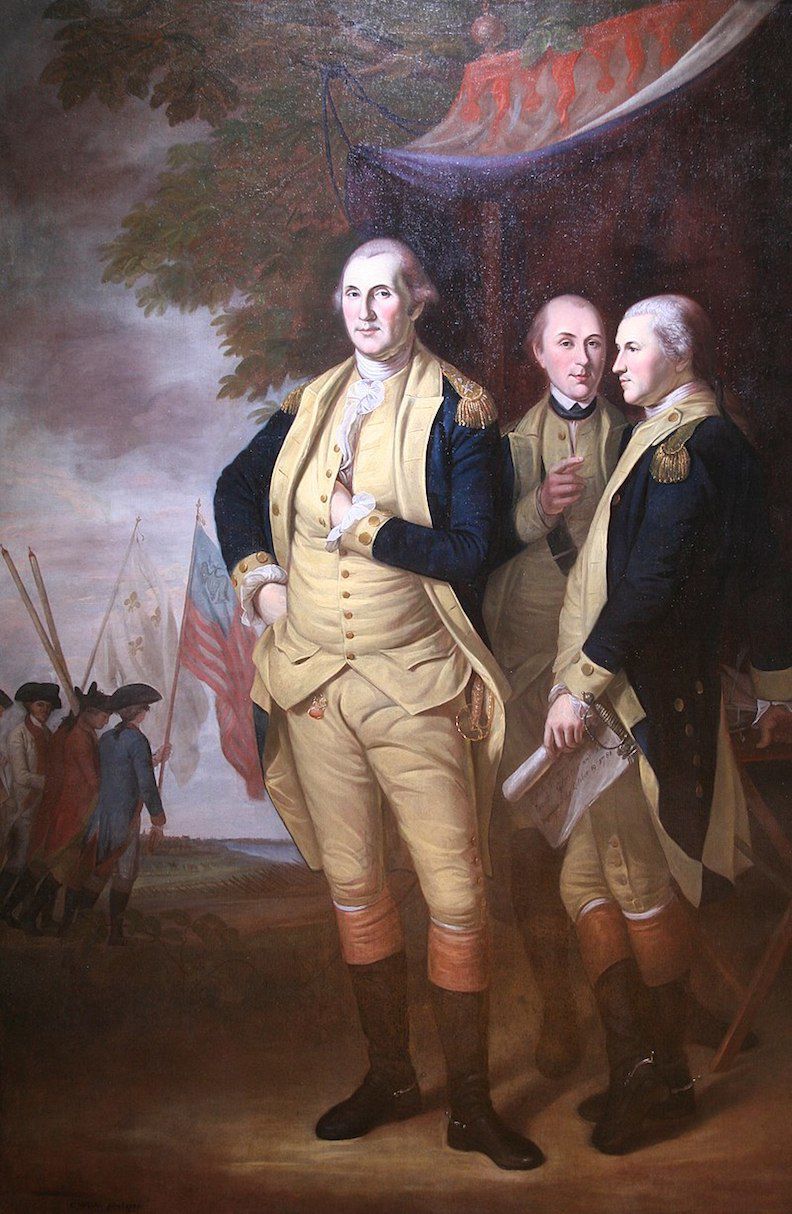 The Peale display at the Museum of the American Revolution in Philadelphia.

Charles Peale’s first portrait of George Washington, property of Washington and Lee University in Lexington, Va., is on display at Mount Vernon. This 1772 piece is the earliest known portrait of Washington. ON THE COVER: Peale’s painting of Washington, the Marquis de Lafayette and Talbot County native Tench Tilghman at Yorktown hangs in the Maryland State House.

Charles Willson Peale was born on April 15th, 1741. Though he was not originally from Caroline County, he did spend some time in the area before ascending to greatness in the American Revolution and Early Federal Period. The observance of his birthday this week is a fitting opportunity to review his many cultural contributions as well as how they are publicly acknowledged to this day.

Peale and his siblings first called Queen Anne’s County home. A highway marker between Centreville and Queenstown, just off of Maryland Route 18 and just outside of the county fairgrounds perimeter, indicates the approximate location of his childhood home and the school at which his father taught. The future artist did not live there long, however, as his mother moved their family to Annapolis in 1751 upon the death of her husband.

Somewhat destitute and dependent on charity, the children were soon apprenticed or hired out to tradesmen. Peale later reflected in his personal diary and autobiography that hard times such as this forced him to develop the work ethic that defined his career as a prolific and detail-focused portrait painter.

As a young man, Peale would discover his artistic talent but also developed a knack for practical work projects as well. He became known in the Annapolis area for his skills as a saddle and harness maker, an upholsterer, a clock and watch repairman, and a silversmith. Peale acknowledged that while these abilities were a blessing, by 1764 he had overextended himself in terms of the work he had agreed to take on and as a result had accumulated a substantial debt three times the value of his assets largely from borrowing money to acquire materials. After finding himself an activist on the wrong side of a local election that year, vengeful creditors of the opposing faction sought immediate payment of the money he owed. Unable to produce those funds and fearing jail time as a result, Peale and his wife fled Anne Arundel County.

The unfortunate events of 1764 ironically are what makes Charles Willson Peale relevant to Caroline County. He and his wife kept a low profile for several months in the vicinity of Hillsboro, then known as Tuckahoe Bridge. They were taken in by his sister, Margaret Jane Peale, until word of his presence there tipped off a local sheriff. Narrowly avoiding arrest, Peale again relocated, this time to Accomac County, Virginia. A younger sister there, Elizabeth Digby Peale, had married a sea captain. In July of 1765, that brother-in-law, Robert Polk, formerly of Dorchester County, hustled Peale by schooner to Boston.

Peale’s time in Caroline County may have been brief, but without the sequence of events that brought him here, he may not have achieved the artistic renown on the national level that persists to this day. While residing in seclusion at Tuckahoe Bridge, he passed the time practicing portrait painting. Once in Massachusetts, he studied under John Singleton Copley, and in 1766, sailed to England and began working with Benjamin West to further hone his craft (both were recognized artistic masters of the age). Upon returning to Maryland in 1769, his checkered financial past mostly forgotten, Peale soon became a highly sought-after artist.

Peale’s first truly iconic work was a portrait of none other than George Washington in 1772. If an artist is measured by the benefactors who patronize him, Peale — in his era and historically — has few peers. In addition to painting Washington some sixty times at various stages of his life and military career, Peale was also commissioned to or inspired to paint portraits of a plethora of contemporaries including Benjamin Franklin, John Hancock, Thomas Jefferson, Henry Knox, Marquis de Lafayette, Nathanael Greene, and Alexander Hamilton among other key figures of the time period.

Peale did not just paint the American Revolution; he participated in it too. After a 1776 move to Philadelphia (the primary city that Eastern Shoremen gravitated to before construction of the Chesapeake Bay Bridge), he joined the local militia and fought in pivotal battles at Trenton and Princeton in New Jersey before returning from action to serve in the Pennsylvania General Assembly. Postwar, Peale dedicated himself to painting scenes from the Revolutionary War and ultimately opened the first public museum in the United States to display his artwork and other scholarly pursuits such as taxidermy, natural history, and engineering.

Visitors to modern Philadelphia may still view a number of portraits painted by Charles Willson Peale as well as reflect upon his contributions to the causes of his day. The Museum of the American Revolution, within the boundaries of Independence National Historical Park, recently debuted and features a three-dimensional display of Peale and his brother James, who also fought in the war. A block and a half west, a gallery operated by the National Park Service and housed in the historic Second Bank of the United States building displays myriad works by the acclaimed artist.

Should there ever be a Hall of Fame dedicated to notable residents of the Mid-Shore, Charles Willson Peale is a first ballot enshrinement guarantee.

Chad Dean, a local history enthusiast and daily blogger at Caroline Past and Present on Facebook, is currently researching the genealogy of Margaret Jane Peale including her residence in Hillsboro and her first husband.