You have permission to edit this article.
Edit

Kent County's Spartans -- players, coaches and board members -- flash the "We're No. 1" sign before boarding the bus Sunday morning at Worton Park. 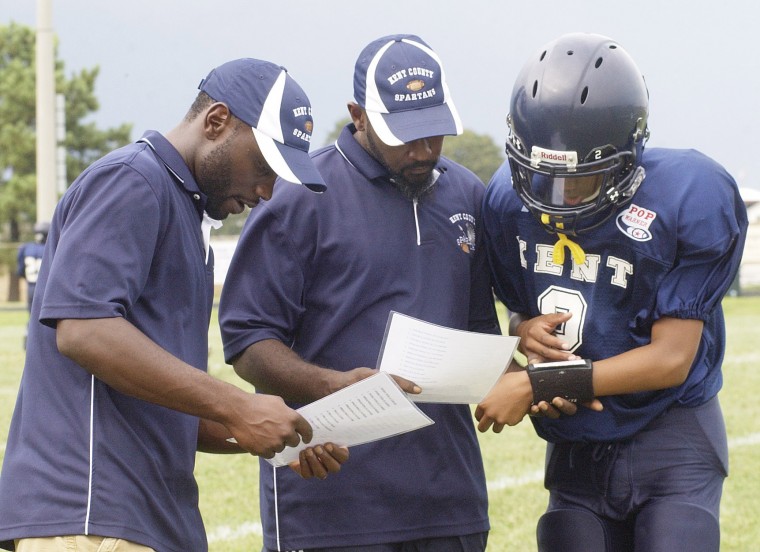 Kent County's Spartans -- players, coaches and board members -- flash the "We're No. 1" sign before boarding the bus Sunday morning at Worton Park.

CLARK, N.J. -- They are the Beasts of the East. Kent's Spartans put the punctuation mark on their unbeaten Pop Warner football season with Sunday's 34-12 drubbing of the Brick City Lions of New Jersey. The Eastern Region championship game was played at Arthur Johnson High School.

Eighth-graders Manuel Camper and Marcquan Green had a hand in all the scoring for the Spartans, who raised their record to 12-0 in the unlimited weight division for 11- to 14-year-olds. The do-it-all Green scored three touchdowns, kicked a couple of extra points, and as a defensive safety was credited with eight tackles.

As the engineer of the Spartans' high-scoring offense, Camper connected with Green for a 25-yard scoring strike and ran for a touchdown. On the other side of the ball, as a corner, he made five solo tackles and intercepted his Brick City counterpart.

Middle linebacker Matt Strong led the defense with 10 tackles. Outside linebackers Eugene Childs and Hunter Dierking each had seven tackles.

As dominating as Green, Camper, Strong and his defensive posse were, Kent was so much more than one or two or three great players, according to coach Wayne “Stump” Lee. “Everyone rallied around each other to make sure we all had a great game,” Lee said in a telephone interview Monday.

At the center of it, however, was Green, whose 42-yard run on the Spartans' opening series closed out a six-play scoring drive. Green's extra-point kick, which is worth two points in Pop Warner play, gave the Spartans an 8-0 lead they would never lose. Green's second touchdown of the afternoon – a 25-yard pass from Camper – gave the Spartans a 14-6 lead by halftime.

Green's third touchdown was a 65-yard sprint, which extended the spread to 20-6.

“He's just a gifted kid,” Lee said of the 156-pound Green. “He's one of the best athletes I've seen in the last 25 years. When it comes to running the ball, some of the things he does … I haven't seen since Barry Sanders was playing in the NFL. He's just an amazing kid, fast, athletic and can stop on a dime.”

Camper called his own number for a quarterback sneak for the Spartans' next touchdown. Green's kick was good, and the lead was 28-12.

The final score of the afternoon was set up by Ty Caulk's interception, which was a momentum buster for Brick City. “They were driving,” Lee said of the Lions, “and if they'd scored it would have been a one-touchdown game. Ty's interception sealed the win for us.”

Camper found wide receiver Dashawn Lister for a 10-yard pass to give the Spartans an insurmountable 34-12 lead.

How did you play?

“We finally had a [competitive] game, which is what you want for your last game,” said Lee, who played on Kent County High School's state championship teams of 1989 and 1990. He said what he saw on Sunday was what he had seen all season. Translation: “We were the better team.”

Camper took most of the snaps from center Zachary Walsh, and at least once called an audible at the line when he picked up a weakness in the Brick City defense. Josh Frey rotated in at quarterback. Green, Da'Quann Seymore, Dwain Brown and Jyler Freeman were the primary ball carriers, running behind an offensive line that starred guards Austin Black and Travon Hicks and tackles Matt Strong and Eugene Childs.

Also drawing high marks from the coaches were safety Caulk, who had four tackles in addition to his game-clinching interception, and defensive ends Kareem Perkins and Casey Loder, who collectively made eight tackles and registered three sacks.

Lee, who has put in 10 years with the county's Pop Warner program, heads a coaching staff that includes John Dierking, Garvin Potts, Jamil Wright, Pierre Tue, Nick Cannon and Dwain Brown Sr. Lee also is the defensive coordinator, while Wright is responsible for the Spartans' amazing offense. Lee, Dierking, Potts, Cannon and Wright are graduates of Kent County High School, and played for the Trojans in the late 1980s and early '90s when they ruled the Eastern Shore.