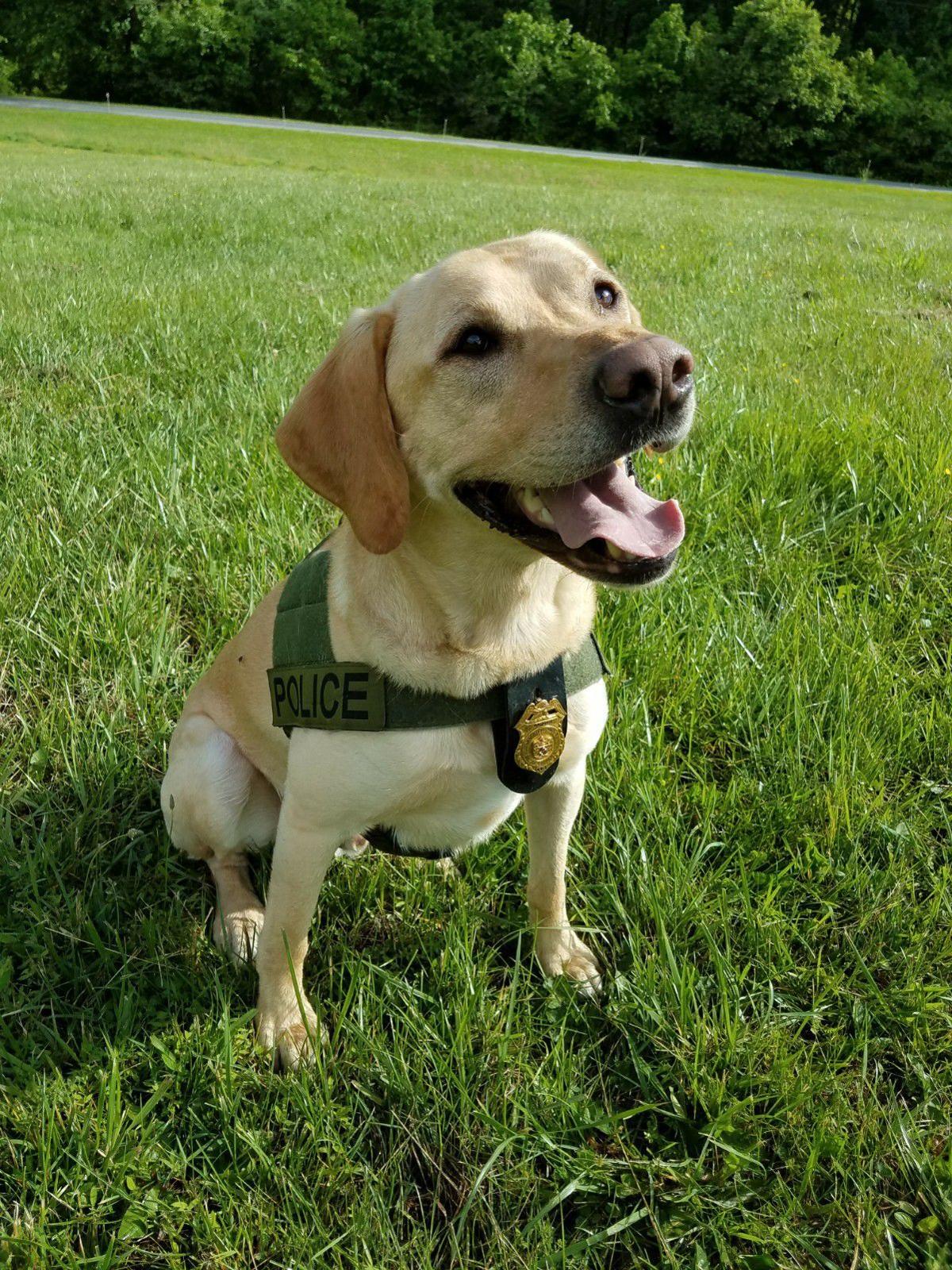 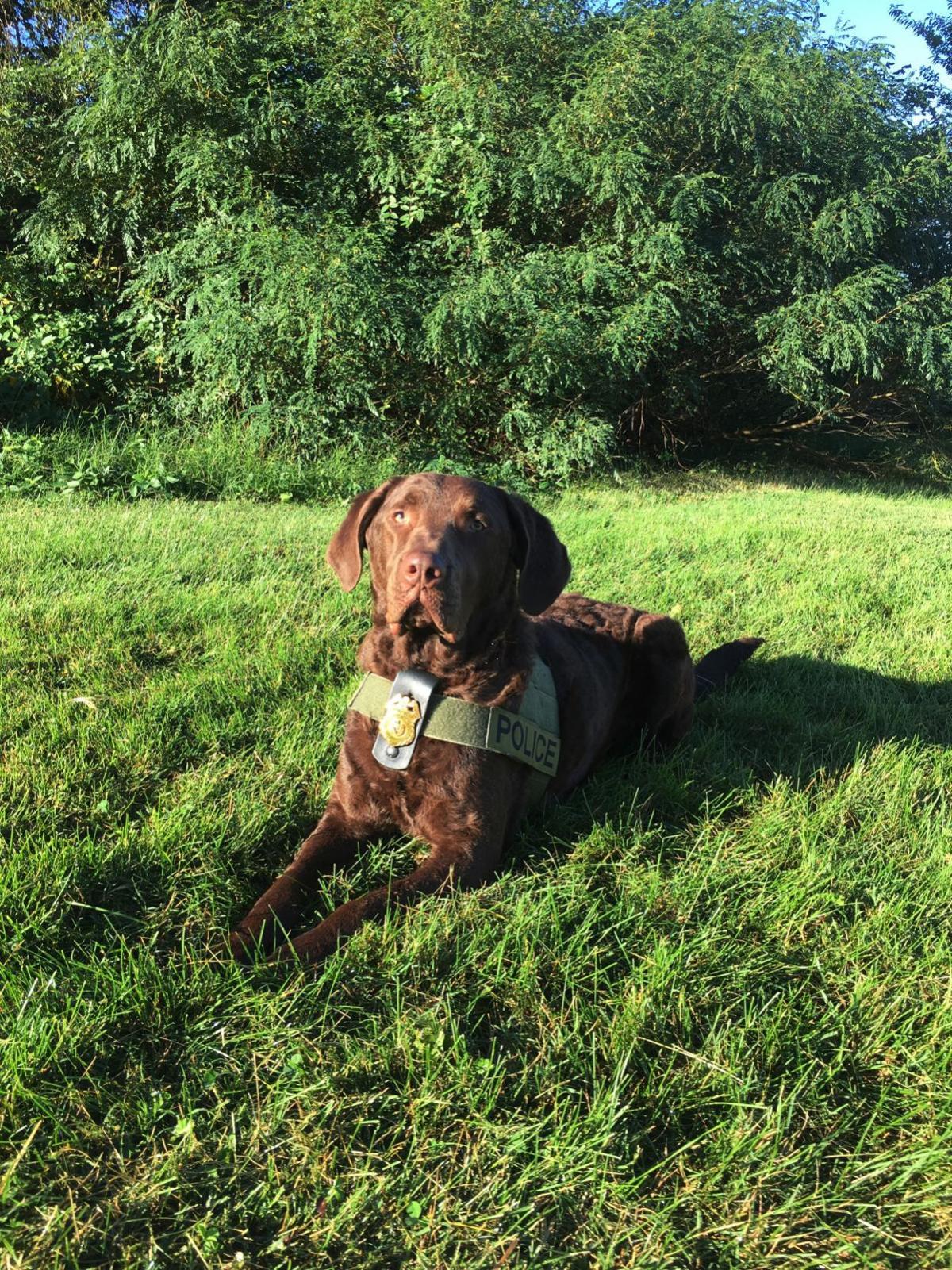 Ruckus is a 4-year-old Chesapeake Bay retriever that works out of Prince George’s County.

Ruckus is a 4-year-old Chesapeake Bay retriever that works out of Prince George’s County.

ANNAPOLIS — According to the square Army green patch on the back of his harness, this officer’s “Beast Mode” is always “On.” Rider, a 30-pound K-9 assigned to the state’s natural resources police, may offer the department more brains than brawn.

For the hound-terrier mix and his trainer, Sgt. Ben Lillard, the insignia demonstrates that his smallish frame does not hinder his ability to perform regular patrol duties.

The NRP K-9 program, which began in 1994, seeks dogs that have a strong drive — the most important trait.

Sgt. Devin Corcoran said any dog NRP acquires must combine a high level of determination with a playful demeanor.

A dog that is willing to crawl under a parked car to retrieve a toy is preferred over a dog that does not demonstrate the initiative, said Virginia’s Department of Game and Inland Fisheries Conservation Police Officer Jim Patrillo, handler of a 3-year-old black Labrador retriever named Bailey.

“Everything we do with our dogs is toy rewarded,” Patrillo said. “When we test dogs, puppies, we look for a high energy and a toy drive.”

“If they have drive and motivation … and some intelligence, we can train them,” Corcoran said of the dogs.

Along with Rider, NRP cares for and maintains three other dogs, including two yellow Labs, Beacon and Badger, and a Chesapeake Bay retriever, Ruckus.

Prior to 2016, NRP’s K-9 units received training from locations in Florida, Kentucky and Indiana, according to Corcoran.

Indiana conservation Officer Jeffrey Milner has instructed about 72 dogs, including three from Maryland, since 1997.

In 2014, Milner trained Corcoran, who is one of three conservation officers who have attended Milner’s training.

Milner, handler of an 11-year-old Labrador retriever, breaks his training regimen down into three different phases, including man tracking, wildlife detection and article search, with each lasting about three weeks.

Corcoran, who completed a 2015 Train the Trainer Course with K2 Solutions in Southern Pines, N.C., with to a contribution from the Humane Society of the United States, said that he brought a similar approach to Maryland.

Maryland’s training usually lasts about nine weeks and varies from 400 to 480 hours, according to Corcoran.

Although the dogs enjoy searching for and locating wildlife, man tracking is the most difficult part of the training, according to Milner.

Dogs typically follow a scent but can often get redirected, compelling the handler to reassess the situation and give the canine a moment to regather the scent, Milner said.

“Reading the dog is key,” Milner said. Handlers “learn every sign that the dog gives them.”

Maryland’s canine training has since transpired in house — for reasons including proximity and cost — and it allows the department to tailor the training to Maryland’s geo-factors.

Although the department’s four dogs are located on the Eastern Shore and in Montgomery, Prince George’s and Baltimore counties, Corcoran said he does not uniquely train each dog for its region, and the dogs can travel statewide.

When the dogs locate an item or person of interest — what Corcoran classifies as the “ultimate goal” — NRP trains them to use a passive action that is easily visible to indicate the find, such as sitting or lying down.

Corcoran trains the dogs to execute a passive action instead of an aggressive one, such as scratching or biting, to ensure that the dog and the evidence or item of interest remain safe.

The canines are then rewarded for their work by the department’s handlers, granting them play time with a toy of their choice.

Millner said he recommends handlers use a variable reward system, which causes a buildup of anticipation and a rush of endorphins.

“Whatever motivates the dog … is what I want the handler to use,” Milner said. “Nationwide, Kong is the toy of choice — probably the dog’s favorite choice.”

Kong toys are made out of rubber that can withstand lengthy chewing and can be filled with snacks.

The K-9 training program is based on positive reinforcement and high praise — tactics that are most effective when instructing dogs, according to Milner.

Two of the department’s dogs, Rider and Ruckus, arrived as donations from county animal shelters, while Beacon was donated by a family.

The Maryland State Police can pay more — anywhere from $3,500 to $9,000 based on the type of dog, where it is procured, the length of warranty and the amount of training the dog may already have, according to the department. The state police have 42 dogs, including German shepherds, Belgian Malinois, Labrador retrievers, bloodhounds and a springer spaniel.

The state police obtained one German shepherd from a rescue facility, MSP said.

MSP dogs are trained in both police activities and detection of material, including narcotics and explosives, according to Brenda Carl, public affairs officer for the law enforcement agency.

Training is also done in house with department trainers and lasts between 12 and 20 weeks depending on the dog and its handler, according to MSP.

Millner also cited the execution of obedience as another factor in the longer training of police dogs.

After tearing the cranial cruciate ligament in his right rear leg, which is similar to an anterior cruciate knee ligament in humans, in June, Rider then tore his left one in October — not an uncommon occurrence for dogs, the department said.

But after Rider makes a full recovery — as the department expects — Beast Mode will be back on duty, tracking down illegal activity involving Maryland’s natural resources.