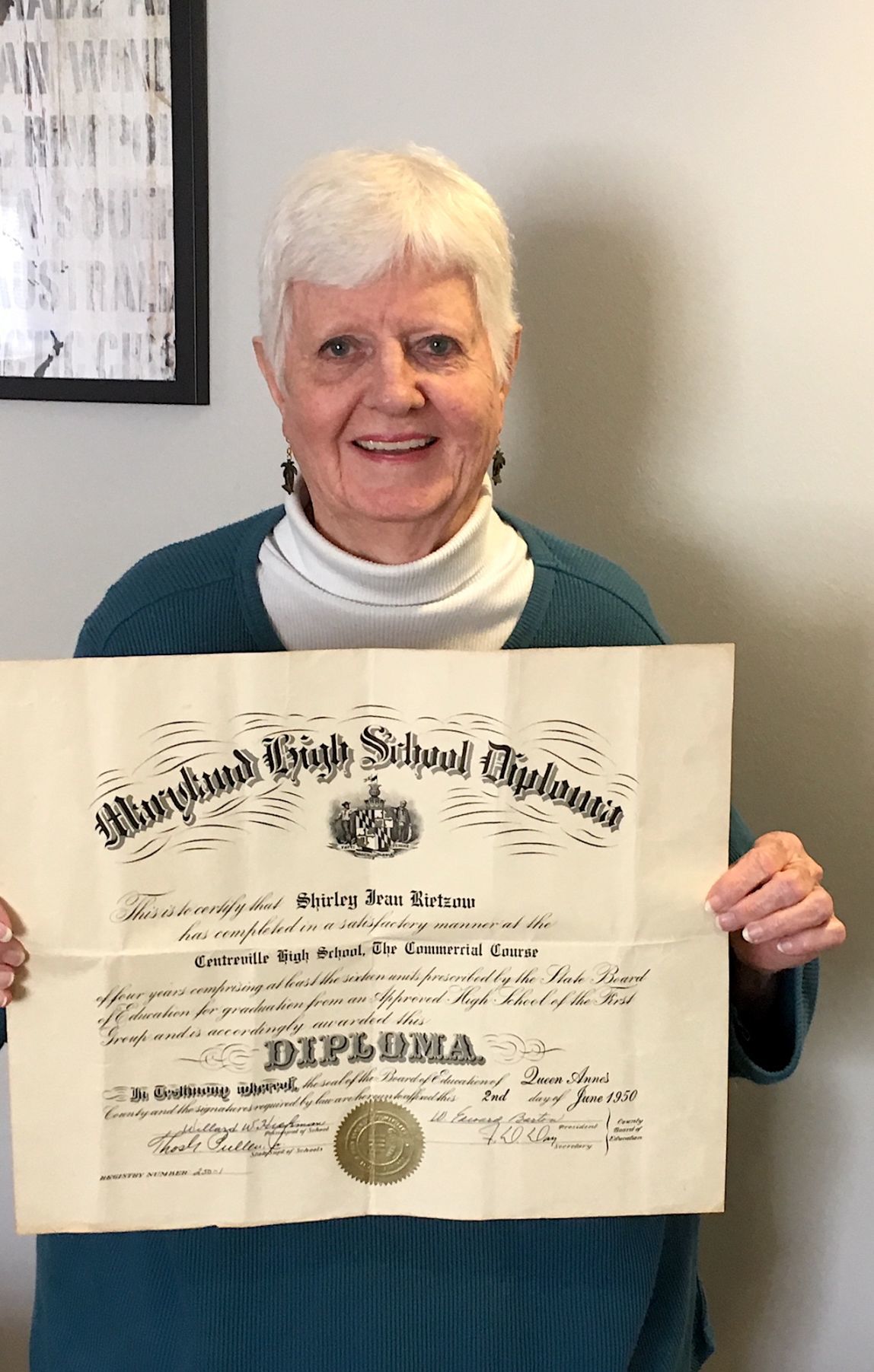 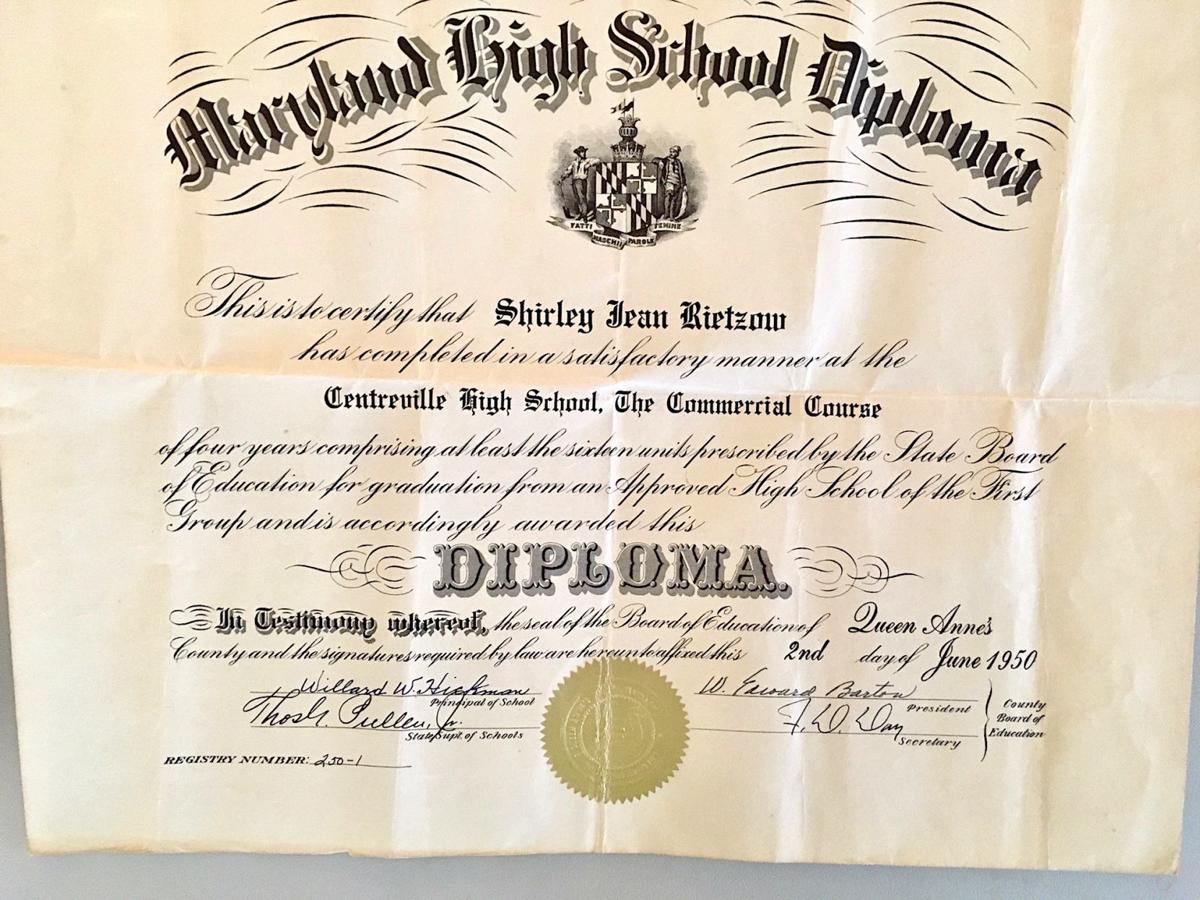 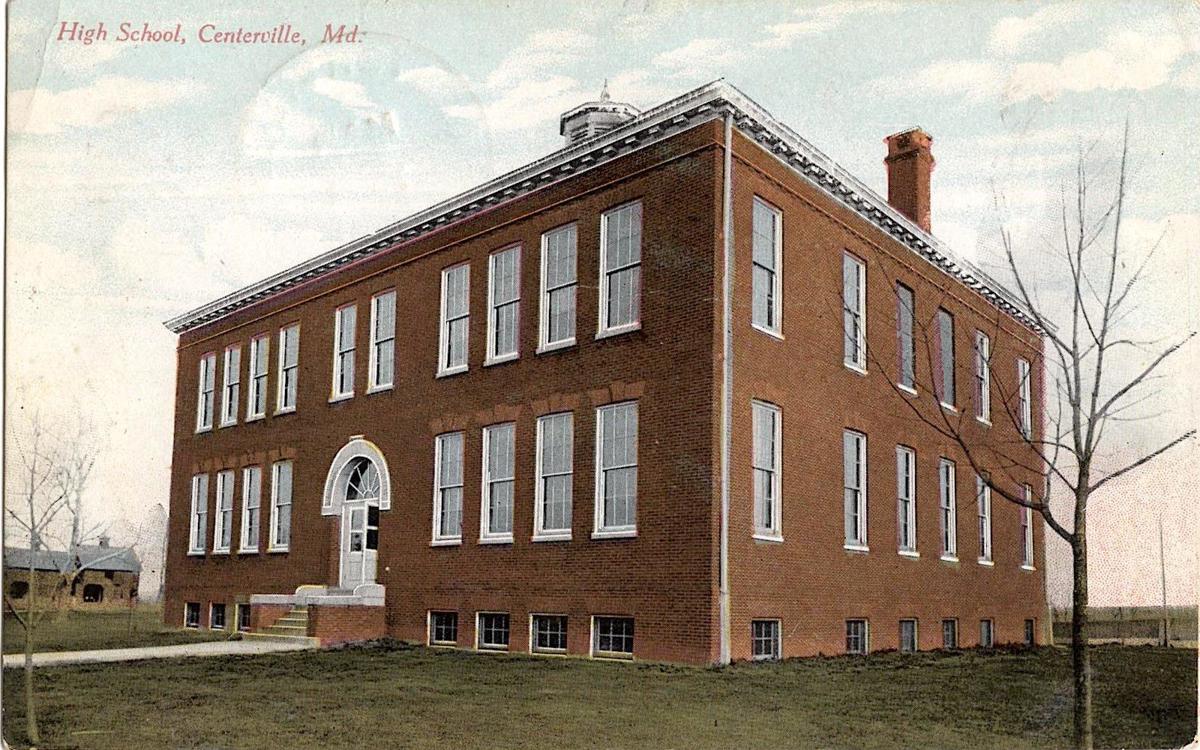 This postcard from 1911 shows a colorized version of a photo taken about that time of the original Centreville High School building, which opened in 1901.

This postcard from 1911 shows a colorized version of a photo taken about that time of the original Centreville High School building, which opened in 1901.

CENTREVILLE — When Shirley Rietzow Werner of Kansas City, Mo., saw the story in the Record Observer about the Queen Anne’s County Museum of Eastern Shore Life’s featured exhibit for August — Centreville High School and John Selby — she knew something was wrong. The museum’s story said there was no Centreville High class of 1950, but Werner knew better. The class of 1950 had one graduating member — Shirley Rietzow — and she has the diploma to prove it.

Even so, Werner contacted the Queen Anne’s County school system to verify she was the only graduate of the CHS class of 1950 before contacting the newspaper.

Jean Cardwell, administrative secretary of student services, confirmed Werner not only graduated in 1950, she was the only graduate from Centreviile High that year. Cardwell said the county had one other graduate but at a different school — Jacqueline Geneva Horner at Stevensville High School. Both Werner and Horner were awarded their diplomas June 2, 1950, Cardwell said.

The confusion arose from the fact that in 1949, the county restructured the 11-year system, adding a requirement that students attend 12th grade to qualify for a diploma. The museum story said the next class to graduate after the class of 1949 was the class of 1951.

Werner, now 86, was shy just one credit from being eligible to graduate at the end of the 1949 school year.

While she could have probably made it up the one credit, she was only 16 — too young to go to work — so she opted to go to school another year, she said.

She was born in Salisbury in 1933 to Louis A. Rietzow Sr. and Mollie E. Hudson Rietzow. Her first memory is of living on the Boyle Farm, part of the Moffett Estate outside Queenstown. Later, they moved to the Shiffer farm on the other side of Queenstown, she said.

Werner got polio at age 2 or 3 and spent time in Kernan Hospital in Baltimore, she said. After she was released from the hospital, the county nurse would visit every month.

She started her schooling at Centreville Elementary in 1938 at age 5 and continued in the Queen Anne’s system until World War II, when her family moved to Baltimore for four years while her parents worked at Glenn L. Martin Company, a munitions factory. After the war, they moved back to the county, living in Queen Anne on a small farm on the Tuckahoe, off Horseshoe Road. She picked up in the 10th grade at Centreville High.

“While in high school, at that time there was a choice of commercial or college-bound classes. I chose the commercial path, doing very well in commercial math, English grammar, shorthand, typing, etc.,” she said.

Then came the gap year.

“The 1949 yearbook staff graciously included a photo of me with the 1949 graduates, with the comment ‘Having transferred to C.H.S. at mid-year, Shirley is unable to graduate with us,’ referring to the fact that I wouldn’t be graduating until 1950, when there would be no ceremony as such nor any yearbook, but a photo of me appeared in the 1949 yearbook nevertheless,” she said.

Her diploma, a whopping 14 inches by 17 inches, with a gold seal, bears the identification: registry number 250-1.

It reads: “This is to certify that Shirley Jean Rietzow has completed in a satisfactory manner at the Centreville High School, The Commercial Course of four years comprising at least the sixteen units prescribed by the State Board of Education for graduation from an Approved High School of the First Group and is awarded this Diploma In Testimony Whereof, the seal of the Board of Education of Queen Anne’s County and the signatures required by law are hereunder affixed this 2nd day of June 1950” and is signed by Willard W. Hickman, principal; Thos. G. Pullen, Jr., state superintendent of schools; W. Edward Barton, president of Queen Anne’s County Board of Education; and F. D. Day, secretary, County Board of Education.

There was no formal ceremony with speeches and a large crowd. The principal called her up in front of the gym and gave her the diploma, Werner recalled.

Instead of going to business school or college, the opportunity came to go right into the workforce, Werner said, which she decided to do.

She applied for a job as a stenographer — “for the Judge Advocate General Corps-Army (military lawyers) at the Pentagon, 5th floor, E ring, as I recall.”

Still just 17, her father had to sign giving her his permission.

“At the Pentagon, I tested with about 30 other applicants for the basic office skills. After that, there were about 15 people left for the typing test. Last was the shorthand test, for which only two or three of us remained for the testing,” Werner recalled.

She got the job.

After the Pentagon, she worked in all kinds of offices — corporate law, maritime law, business law, bankruptcy law, architects, a sporting good distributor, the Naval Gun Factory and the FBI. She even met J. Edgar Hoover while working in the Los Angeles office, she said.

While the titles changed over the years, “it was still office work, and you did whatever you were asked,” she said.

She has lived and worked all over the United States from the Eastern Shore of Maryland to Los Angeles in California to Honolulu, Hawaii. She also took a 16,000 mile driving trip around the continental U.S. in 2008.

Now retired, she said she enjoys sewing, cross-stitching, and activities at the senior apartment complex where she lives.

“I go to lunch or dinner once in a while and maybe a foray to the local casino now and then; otherwise, I do everything I can online, every kind of shopping that I can do online,” she said.

Werner said she found herself living in Kansas City because of her son’s job opportunities, and she expects to move to Nevada in the next year as another opportunity takes him and his family there.

She still has friends and family in the area. Her nieces and their families live in Trappe, Cordova, Ridgely, Annapolis and Salisbury.

During her research on the class of 1950, Werner found classmates.com lists two from Centreville High School, herself and an Elaine Stubbs, but she doesn’t remember an Elaine Stubbs and couldn’t find her in either the 1948 or 1949 yearbooks. Cardwell also confirmed Stubbs did not graduate from the local school in 1950.

If anyone knows or has any information on Stubbs, Werner would be interested in hearing from them, she said.