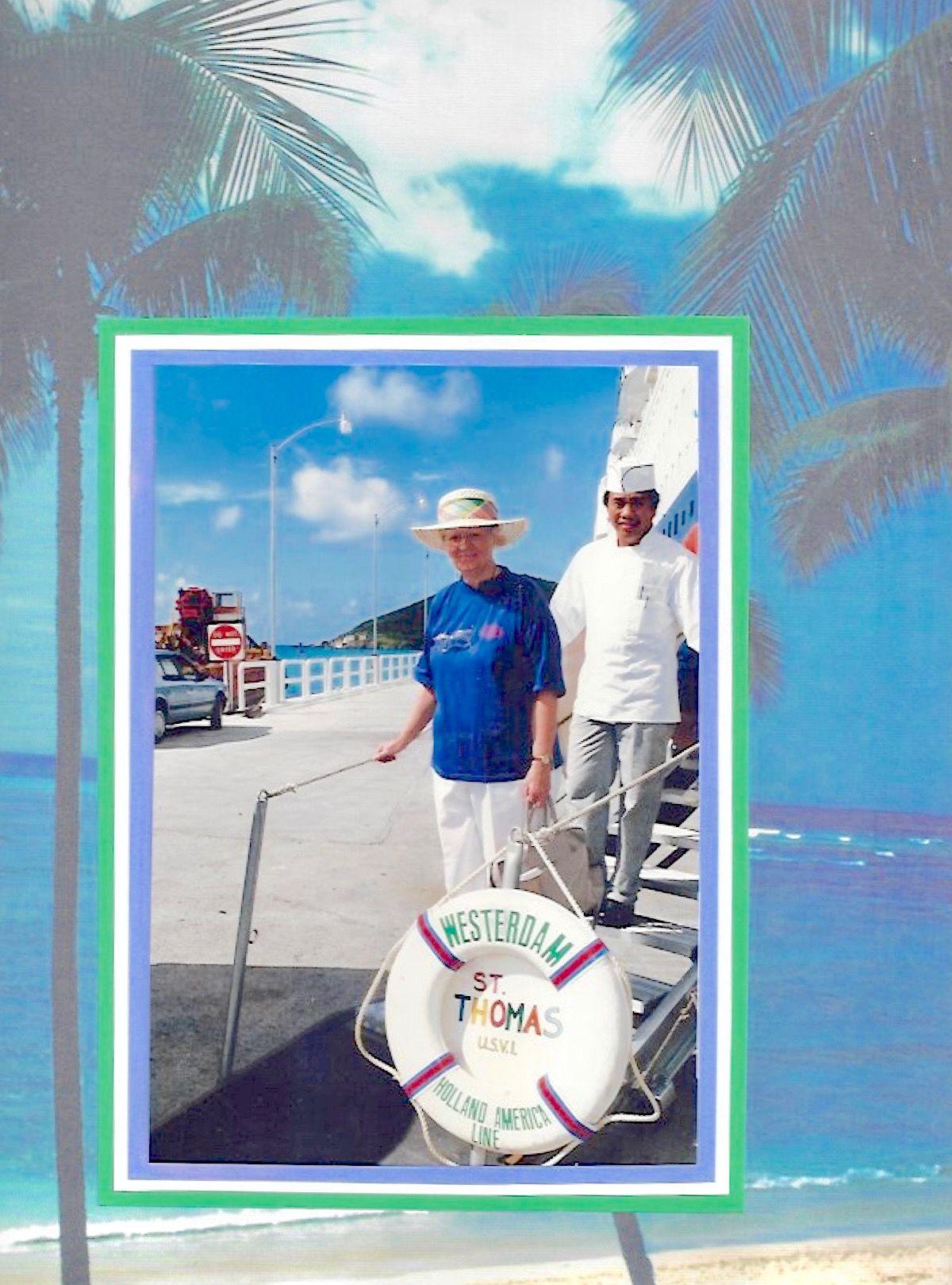 Shirley Rietzow Werner shared this photo from her scrapbook showing herself aboard the SS Westerdam during the seven-day Caribbean cruise she won in a typing contest. 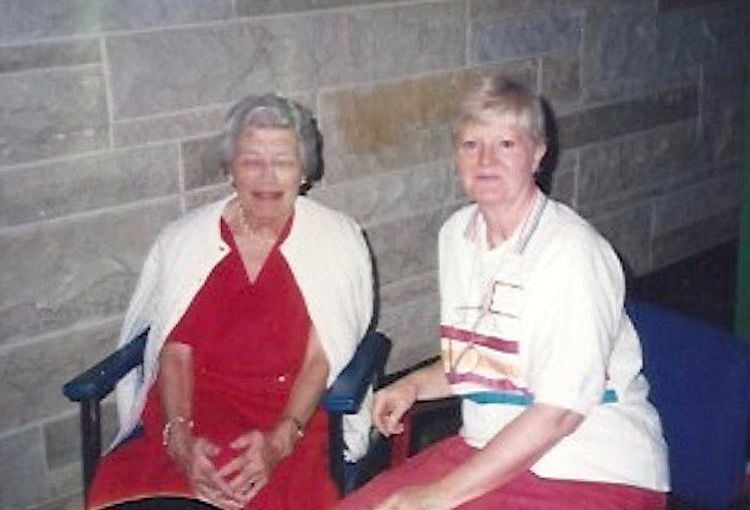 Shirley Rietzow Werner shared this photo from her scrapbook showing herself aboard the SS Westerdam during the seven-day Caribbean cruise she won in a typing contest.

Editor’s Note: Shirley Rietzow Werner, the only graduate of Centreville High’s Class of 1950, recently shared the story of a typing contest she won along with a picture of her with high school typing teacher, Mrs. Miriam B. Dean.

She was working at a sporting goods distributor in Irvine, California, at the time of the contest.

She said Dean would certainly have enjoyed one of her students winning a typing contest.

In early April 1990, I heard about a typing contest through a local employment agency. Actually, the ad said “fastest word processor.” The vocabulary might have changed over the years, but it was still a typing contest as far as I was concerned, I had heard of typing contests in other years, generally around Secretaries Week, but had never had any inclination to enter.

That year, however, I had heard about the contest again, and a former employee where I worked at the time also called me at work one day to tell me about it, so I figured, what the heck, maybe that was the year to give it a go.

For what was to be the preliminary typing test, I went to Olsten Agency on Bristol Street in Costa Mesa, California, after work on a Tuesday at 7 p.m. I had no idea what I was doing, really. It was unfamiliar equipment, an uncomfortable desk/chair set-up, too low, etc. Also, I was not really a computer keyboard typist. My main experience was on electric typewriters, and the touch between a typewriter and a computer keyboard was very different.

The idea was that people would come in and do the typing test on the word processor/typing program — throughout Southern California — and there would be a run-off of the 10 top finalists sponsored by KFI Radio and Olsten.

The typing program and pre-test were unique and quite fair. The program itself tested the entrant and computed the results by words per minute, error rate, types of errors and accuracy. The program instructed the entrant on the exact steps to take to practice and then to test. There was no person or human element to mess up the instructions or judge the test incorrectly.

Anyway, the Olsten contact person left me to my own devices in a small room at the employment agency. I muddled my way through the practice part and then went into the test mode.

It was a 5-minute test. I hadn’t typed for five minutes straight on, full blast, at top speed, for as long I could remember. There was never five minutes at the office that wasn’t interrupted by any of a myriad of reasons. The muscles in my arms actually began to ache!

The official results of my pre-test were: elapsed time 5 minutes; total errors 8; error rate 1%; words per minute 117. I actually typed faster than 117, but the program automatically deducted for errors.

I didn’t think too much about it. It was interesting, but I didn’t think 117 wpm on a word processor was terribly fast. I figured that keyboard typists would generally be pretty fast in the new computer era that we were in.

But, on April 25, a representative at KFI/AM/640 radio station called me and said I had qualified as one of the top 10 entrants and could I be at the Olsten offices on Wilshire Boulevard the next day. I said that I probably could; that I would figure out something to get away from the office.

The next day I went to work and told my boss that “I have to be away from the office for a little while today,” and that’s all I said. I never said anything about where I was going or what I was doing. I left the office about 10 a.m. for Wilshire Boulevard.

I got to the Olsten offices, waited a while; the other contestants were there. I was at ease. That whole thing was a lark to me, not really to be taken seriously. I was at the back of the room, just leaning against a desk and casually talking to one of the ladies. Olsten personnel were around, making casual conversation. We were finally instructed to go downstairs.

TV channels 4 and 11 were there, including all their various newspeople and cameramen. KFI Radio was there, including its announcer and people. Olsten personnel were there from two or three different branch offices. Mayor Tom Bradley’s assistant introduced the event. What an adventure!

By this time, I had talked to a couple other entrants about the whole event. We all seemed to be taking it rather well, but I was sure some of the contestants were taking it seriously and were nervous. One lady entrant had mentioned that if she won, she already knew what she was going to do with the cruise prize and that was to give it to her mother and father. I think she more or less expected to win as she could type somewhere around 130 wpm. There was another lady entrant there, too, who could pound the keys in the high 120’s somewhere.

During the waiting period in the offices, we sort of got an idea of who could do what and how fast, and we all more or less knew who the two fastest typists were.

So far, nothing fazed me. I was really taking the whole thing as a big lark. However, when you’re sitting out on a sidewalk, with cameras in your face and on your hands, a radio announcer poking his microphone at you and constantly chattering, noise all around you, and trying to concentrate and type as fast as you can for five minutes straight, believe me, it’s wild!

Of course, by this time, there were spectators around, too, besides everyone connected with the contest itself.

So, finally, everyone had their shot at the final test. I concentrated and typed as best as I could. I had a “hesitation” start, then got up to speed, but I assumed that I wouldn’t be the fastest one, plus I had some errors, nor did I care! It had all been a fun experience, and I was just glad by that time to have entered and had the fun of being able to say someday that I had entered a typing contest.

The results were tallied (all computer results; again, no human error involved). They lined us up on the sidewalk with a banner in front of us. I was still making jokes and wondered if the banner said something like “Last of the Secretarial Bimbos.”

Cameras were in position for the announcement.

The announcer called off the third place winner (weekend trip to Palm Springs); it was one of the ladies whom we knew as one of the fastest contestants; but here she had only come in third with 116 wpm. What’s going on, I asked myself.

The announcer then called off the second place winner (another weekend trip to Palm Springs); it was the other lady whom we knew to be the 130 wpm person; but she had only come in second with about 112 or 115 wpm. What’s going on, I asked myself again? If the two fastest entrants didn’t win, then who the heck did?

Well, when the announcer called my name, I was stunned. I raised my rams in the air and yelled ALL RIGHT!

The deciding factor turned out to the error rate. The two fastest typists had made way too many errors, and I slid in with about 117 or 118 after errors. The prize was a seven-day Caribbean cruise, including airfare from California to Florida and return.

Everyone was very nice, seemed happy for me, congratulated me. I was interviewed by the TV channels, and the interview was aired that night on both channels.

The cruise people presented me with the trip. I got flowers, too, had my picture taken.

Oh, one of the things I laughingly told the TV interviewers after I had won was that my office didn’t even know where I was; I had simply told them “I was going to be away from the office for a while,” and that’s part of what aired on the news later that night.