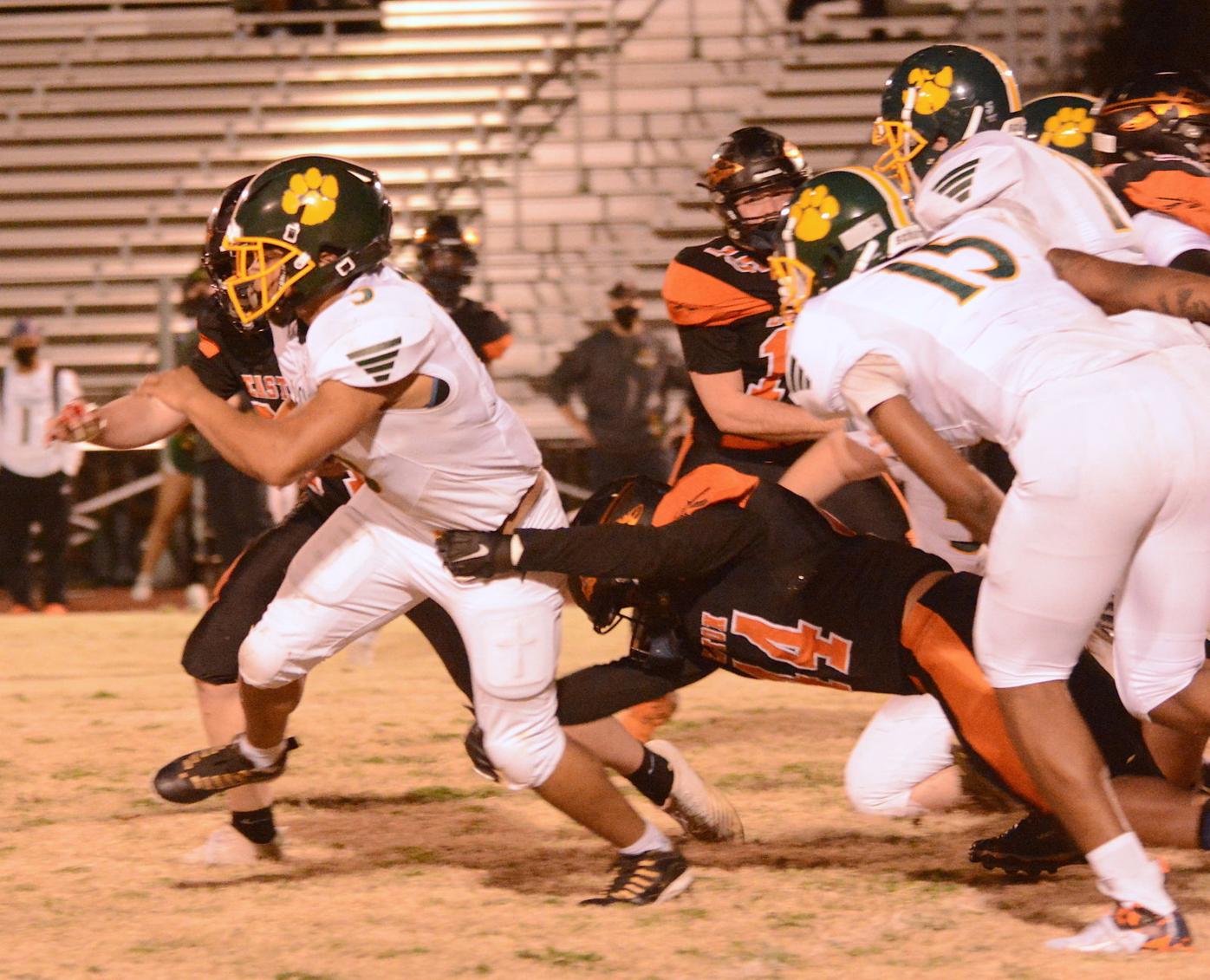 Queen Anne’s County’s KJ Smothers (5), who carried 21 times for 76 yards and caught five passes for 111 yards, tries breaking away from the pack during Friday night’s game against Easton. 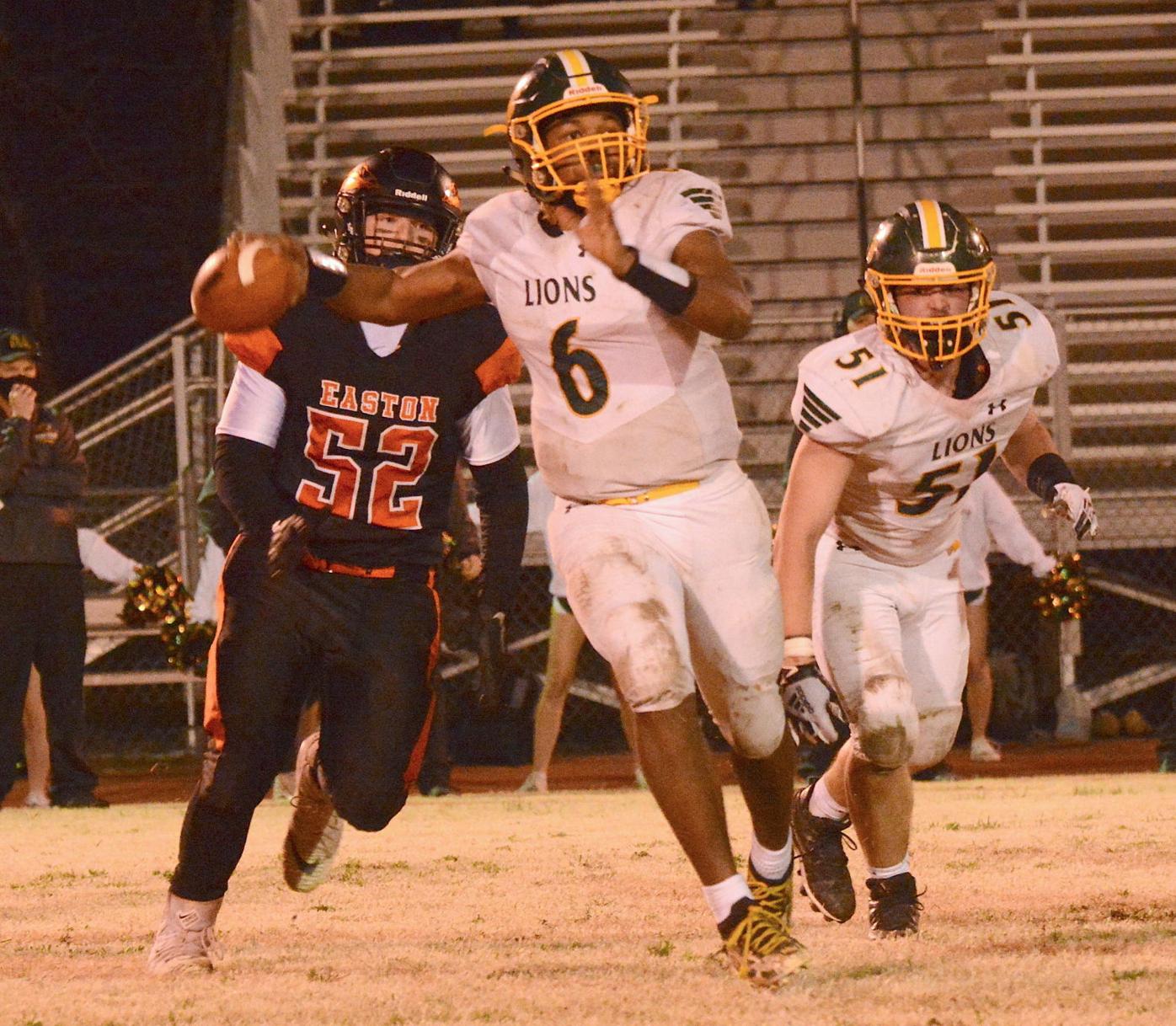 Queen Anne’s County’s KJ Smothers (5), who carried 21 times for 76 yards and caught five passes for 111 yards, tries breaking away from the pack during Friday night’s game against Easton.

The bulk of O’Connor’s 2019 season though was spent at starting quarterback, with the idea he would likely be the starting varsity QB after his older brother Ryan graduated this spring.

The Warriors moved forward with that plan this abbreviated fall season, bringing Kevin up to varsity where he’s backing up his brother at quarterback. But the 6-foot-4, 195-pound sophomore will spend the majority of this season at defensive end, where he made an impressive varsity debut Friday night, logging 3½ sacks during Easton’s 21-7 season-opening victory over Queen Anne’s County at Warrior Stadium.

“He played crazy tonight,” Ryan O’Connor said of his younger brother. “That was awesome to watch him do that.”

“He’s a stud,” Easton head coach Pat McGlinchey added of the sophomore end, who was part of a defensive unit that was flirting with the Warriors’ first shutout of Queen Anne’s since 1980 before Lions senior quarterback SyRus McGowan hit Jordan Johnston for a 36-yard touchdown pass with 6 minutes, 39 seconds remaining in the game.

That trimmed Easton’s lead to 21-7. And though Queen Anne’s (0-2) recovered the ensuing on-sides kick, the Warriors yielded just one first down the remainder of the game, and watched Kevin O’Connor notch his final sack before Shareef Curry intercepted McGowan with 9 seconds left.

“That was very impressive,” McGlinchey said of his defense. “The front six guys … really all of them did a great job. At the beginning of the game we bent but we didn’t break. And then the second half we played lights out. The one touchdown they scored we had 10 guys on the field the entire series. And that’s on the coaches. We should have recognized that.”

Easton (1-0) took the opening kickoff and needed just five plays to find the end zone. Ryan O’Connor, who completed 15 of 28 for 223 yards, one touchdown and an interception, connected with Grant Copper for a 49-yard pickup, and hit Winters for 13 yards, before racing around right end for a 3-yard touchdown run with 9:36 left in the first quarter. Tristan Cassell supplied the first of his three extra-point kicks for a 7-0 lead.

McGowan (14 of 27, 226 yards, one touchdown, two interceptions) was picked off by James O’Connor — Ryan and Kevin’s brother — on the Lions’ second play from scrimmage, giving Easton possession on the Queen Anne’s 23-yard line. The Warriors pushed to the 15 but Ryan O’Connor threw incomplete on fourth down and the Lions took over on downs.

Largely behind the running of KJ Smothers (21 carries, 76 yards) and Gena Trice, Queen Anne’s drove from its 15 to the Warrior 30, where the drive stalled as McGowan was stopped on fourth-and-five.

The Lions put together another sustained drive late in the second quarter, grinding from their 29 to the Warrior 19, where McGowan threw incomplete on third and fourth down.

“I feel like our defense played extremely well,” Winters said. “Especially for the first real game. Especially after having a year and a half off.”

Queen Anne’s, which had 318 yards in offense to Easton’s 283, opened the second half by marching from its 37 to the Warrior 28, but again could get no further.

Easton took over on downs, and pieced together an 8-play, 72-yard scoring march, with Ryan O’Connor completing all five of his attempts on the drive, including a 17-yard touchdown pass to LJ Murray into the corner of the end zone for a 14-0 lead with 6:09 left in the third quarter.

Both defenses took over before a bad snap from center sailed over the head of Queen Anne’s punter Garrhet Richardson, who was downed on the Lions 3. Winters scored on a 3-yard run on the next play for a 21-0 bulge with 8:26 left in the game.

Easton had a chance to widen its lead when Kevin O’Connor sacked McGowan and forced a fumble the Warriors recovered at the 14. But on third down, Ryan O’Connor threw under pressure and was intercepted by Smothers.

“I think our offense played good enough to win tonight because our defense played lights out,” McGlinchey said. “Offensively, we feel like we left four scores out on that field.”

The Lions avoided the shutout, as McGowan hooked up with Smothers for a 49-yard gain, then two plays later hit Johnston down the middle for a 36-yard score.

Waters said his defense is continuing to adjust to his schemes, and was missing one of his starting cornerbacks due to injury. He also noted the Lions were without offensive coordinator John Waters for much of the practice week, and said his team had a lot to overcome, but wouldn’t make excuses.

“We’re going to keep battling through it and get ready for next week,” Waters said.

RIDGELY — Quarterback Alex Walstrum threw for two touchdowns and scored on a 12-yard run Friday as the Bulldogs improved to 2-0.

Kent Island (0-1) struck first on a 28-yard Matt Burnside hook-and-lateral pass to make it 7-0. The Bulldogs answered with two passing touchdowns for a 14-13 halftime lead following a Bucs score and missed point-after kick.

Walstrum’s third-quarter touchdown run put the margin at 20-13. Ethan Dvorack’s 27-yard rushing score, several plays after his 51-yard dash upfield accounted for the longest gain on the night, made it 26-13.

The Bucs scored in the final three minutes to cut the deficit to one touchdown, but the Bulldogs smothered the ensuing on-sides kick and ran out the clock.

STEVENSVILLE — Brooke Loveless and Madison Ellwood each had six kills, and Emma Diphilippo and Rachel Guerra added four apiece Thursday, as the Buccaneers improved to 2-0 with a 25-4, 25-9, 25-15 win over Colonel Richardson.