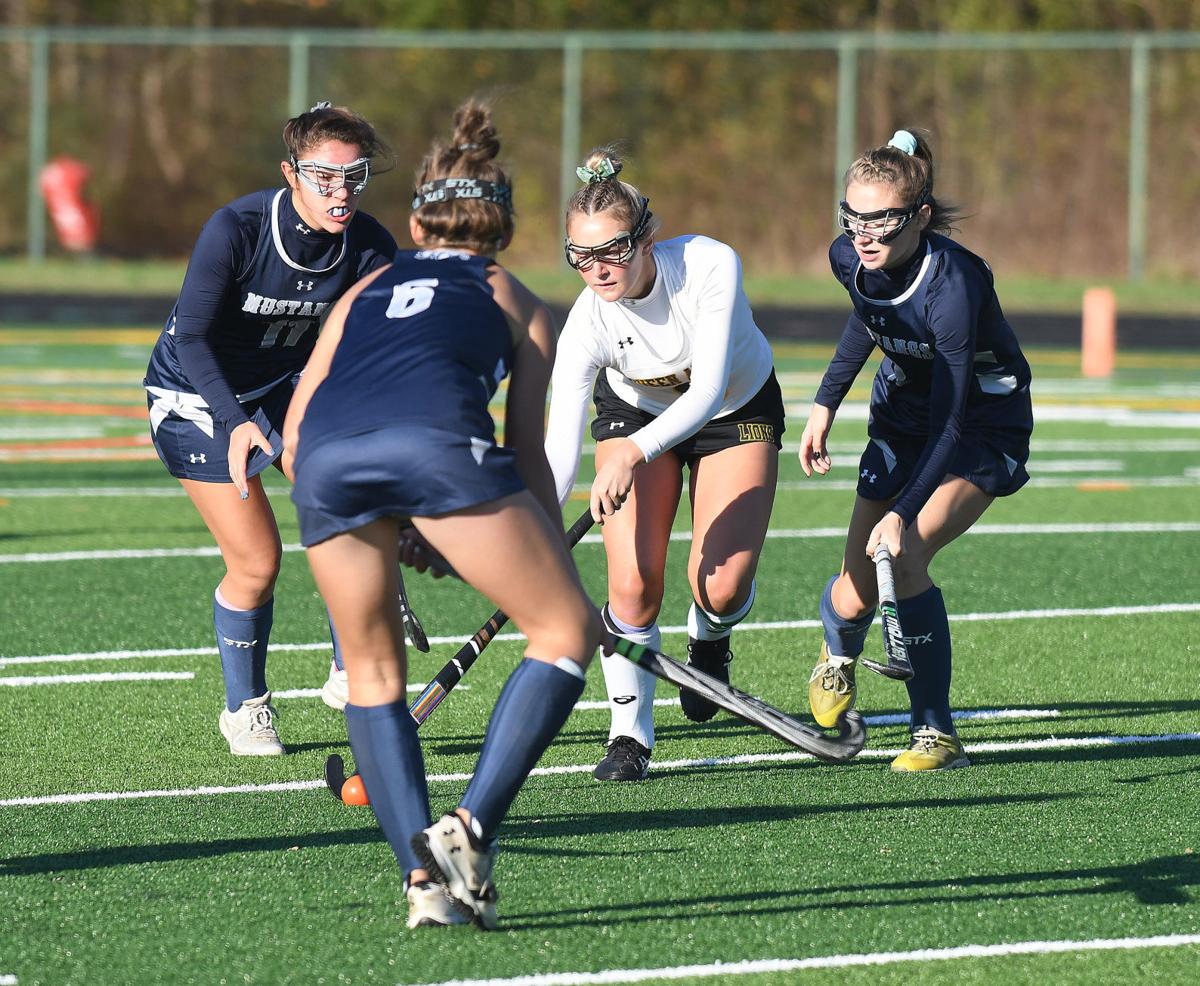 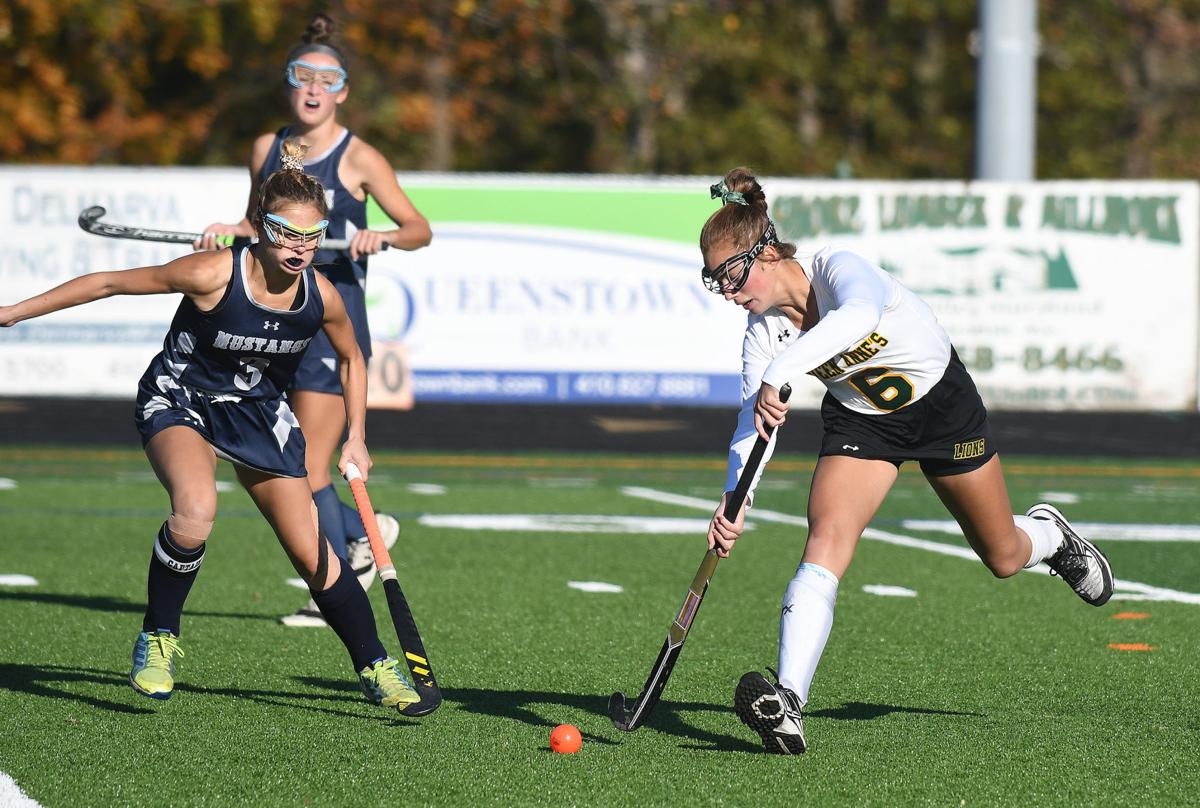 Queen Anne’s County High’s Alyssa Riggleman moves the ball up the field away from Marriotts Ridge’s Emma Gladstein during the first half Friday afternoon in Centreville. 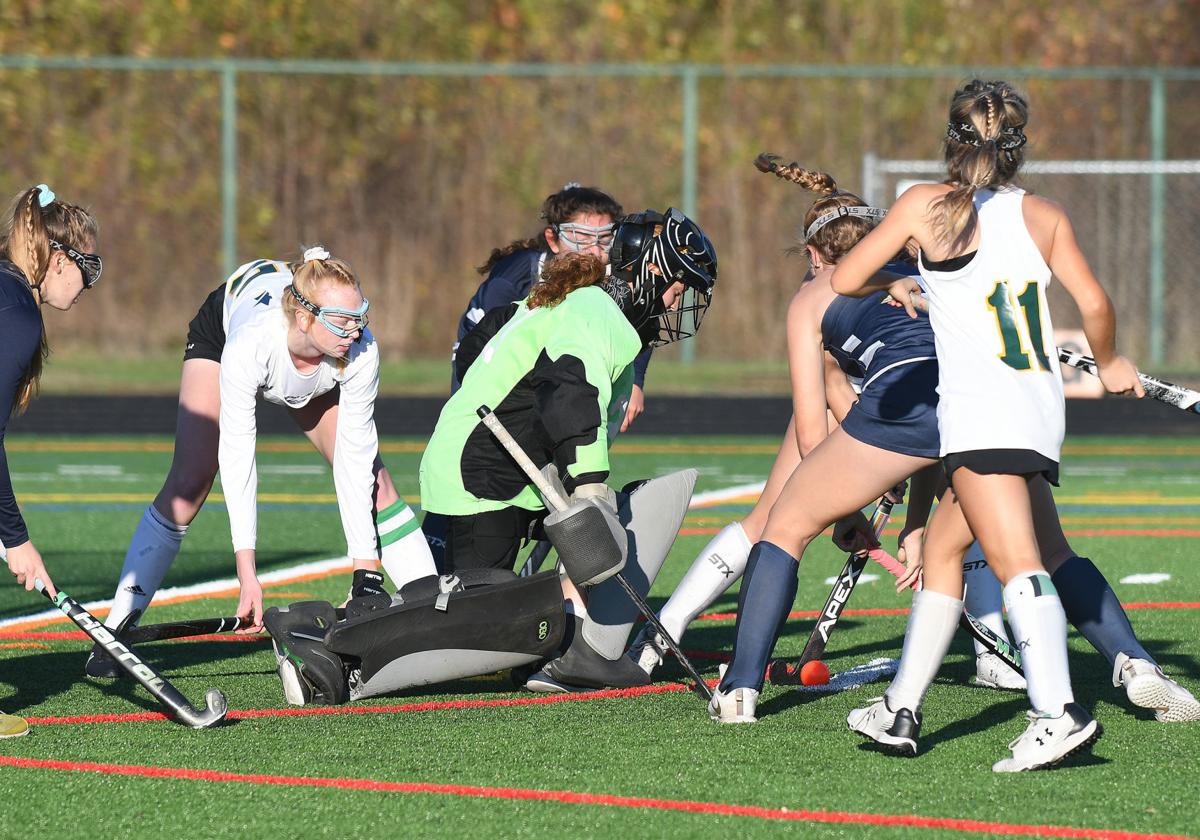 Queen Anne’s County High goalie Belle Fields and teammates work to keep the ball out of the cage against Marriotts Ridge during the second half Friday afternoon in Centreville. 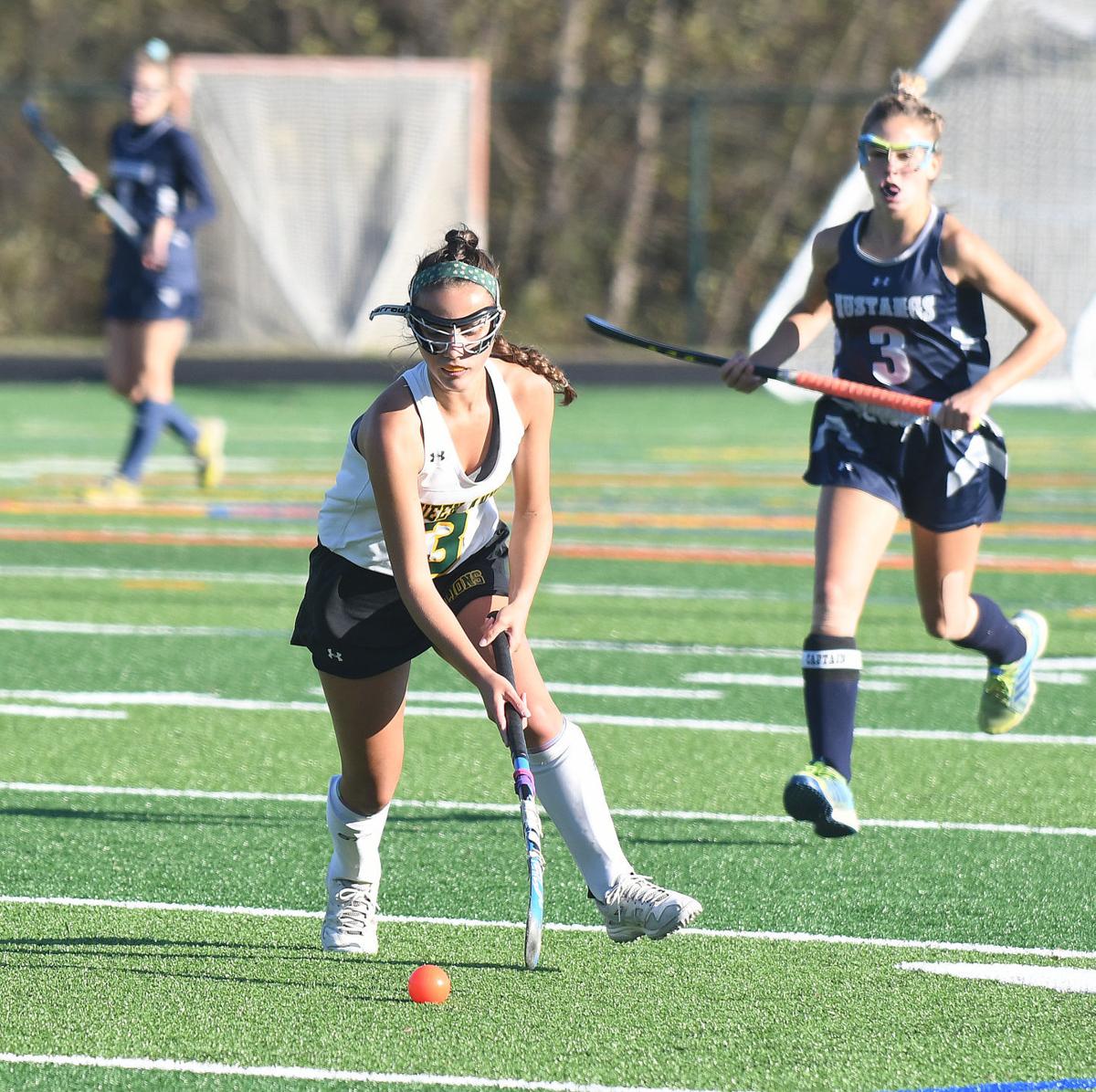 Queen Anne’s County High’s Brianna Schindler transitions the ball up the field during the first half against Marriotts Ridge on Friday afternoon in Centreville. 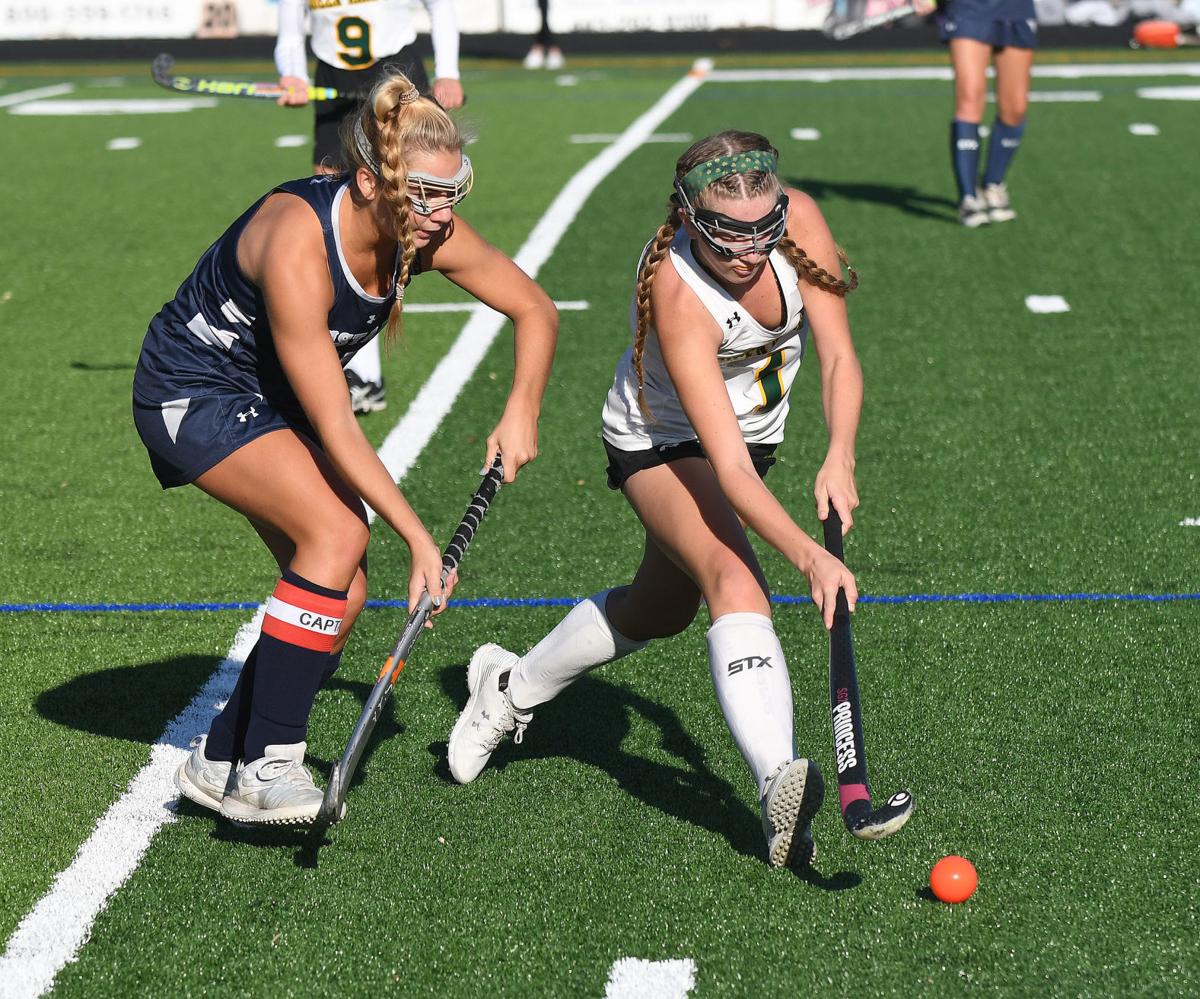 Queen Anne’s County High’s Alyssa Riggleman moves the ball up the field away from Marriotts Ridge’s Emma Gladstein during the first half Friday afternoon in Centreville.

Queen Anne’s County High goalie Belle Fields and teammates work to keep the ball out of the cage against Marriotts Ridge during the second half Friday afternoon in Centreville.

Queen Anne’s County High’s Brianna Schindler transitions the ball up the field during the first half against Marriotts Ridge on Friday afternoon in Centreville.

CENTREVILLE — The Mustangs sent freshman Sophia Baxter to the penalty spot, seven yards between her and Queen Anne’s junior goalie Belle Fields. The odds were in Baxter’s favor. And she delivered.

Baxter sent a quick flick high into the left side of the cage with 3 minutes, 21 seconds remaining in overtime Friday and Marriotts Ridge High’s field hockey team erupted in celebration with a 1-0 victory in the Class 2A state quarterfinals.

The Mustangs controlled the extra session and the majority of the game during regulation, but solid play by both teams’ defenses kept the game scoreless with 11 players on the pitch.

“The girls played the entire game, you know that whole 60 minutes into the overtime, and part of what we focus on is playing as a team and everybody’s a contributor — it’s not just one player that going to make the game, even though we just had one player score,” Mustangs head coach Stacie Gado said. “We got to that point because of all 11 players on the field and also our subs on the sideline playing together, working together, supporting each other.”

Marriotts Ridge (8-3-1) advances to the state final on Thursday at Broadneck High against either Hereford or Thomas Stone.

Queen Anne’s, which got eight saves from Fields, finished at 8-4-1 with the Class 2A East Region I championship.

“They were a super competitive, super aggressive team,” Gado said of Queen Anne’s. “They definitely had their moments when they were intense out there. You could see that they came out with that want to win, and it’s great to have a competitive game like that. And that’s how a playoff game should be. It should be a close game and an exciting game, and that’s what is was.”

Queen Anne’s best scoring opportunity came with a little over two minutes to play in regulation with a flurry of action on the left side of the crease created by junior forward Chiara Rogers, but Mustangs goalie Grace Tolle turned away a pair of shots from close range. Rogers also sent a shot wide on a break with 1:50 remaining, which was the last shot for the Lions.

Mustangs senior forward Eloise Clevenger moved the ball quickly up right wing with a little over a minute left in regulation and teammate Emma Gladstein, also a senior forward, delivered a drive seconds later, but the ball was stopped by Queen Anne’s defense and Lions senior defender Katie Ray ended the attack as time ran out.

With seven players on each side in the 10-minute OT, Marriotts Ridge’s attack intensified led by Clevenger and Gladstein. Fields blocked a pair of shots in the first minute and the Mustangs eventually created a penalty corner with 3:40 remaining. Baxter was tripped near the top of the scoring circle and was awarded a penalty stroke as a referee judged the violation as intentional or preventing a probable scoring of a goal. Any attacking player can take the penalty stroke, but the Mustangs stayed with Baxter.

“She’s a freshman that was pulled up to varsity mid-season,” Gado said. “And that’s actually the first penalty stroke she’s done for us this year. We’ve only had three or four others in season.”

Both teams were playing their third game in five days, each with season-ending implications. The Lions were coming off an upset win over top-seeded Kent Island in the East Region final. The Mustangs were the top seed in 2A South Region II and defeated Glenelg 2-1 in the semifinals before shutting out Wilde Lake 6-0 in the final.

“To end in overtime on a stroke, that’s a tough loss right there,” Lions head coach Shana Corder said. “You feel worse for your goalie who, Belle, she stood strong again today. She had a great week and for it to end like that for her my heart breaks because nine times out of 10 it goes the stroker’s way. But great effort. The defense stood great for us today. We had a hard time making offense, cutting to the ball. They were tripling us. We have never done well all year with triple-teams. They’re a great team. I was impressed by them. But I’m proud of my girls. We had a great season. I’ll miss the seniors deeply, but that’s how it goes, the highs and lows of playoffs.”