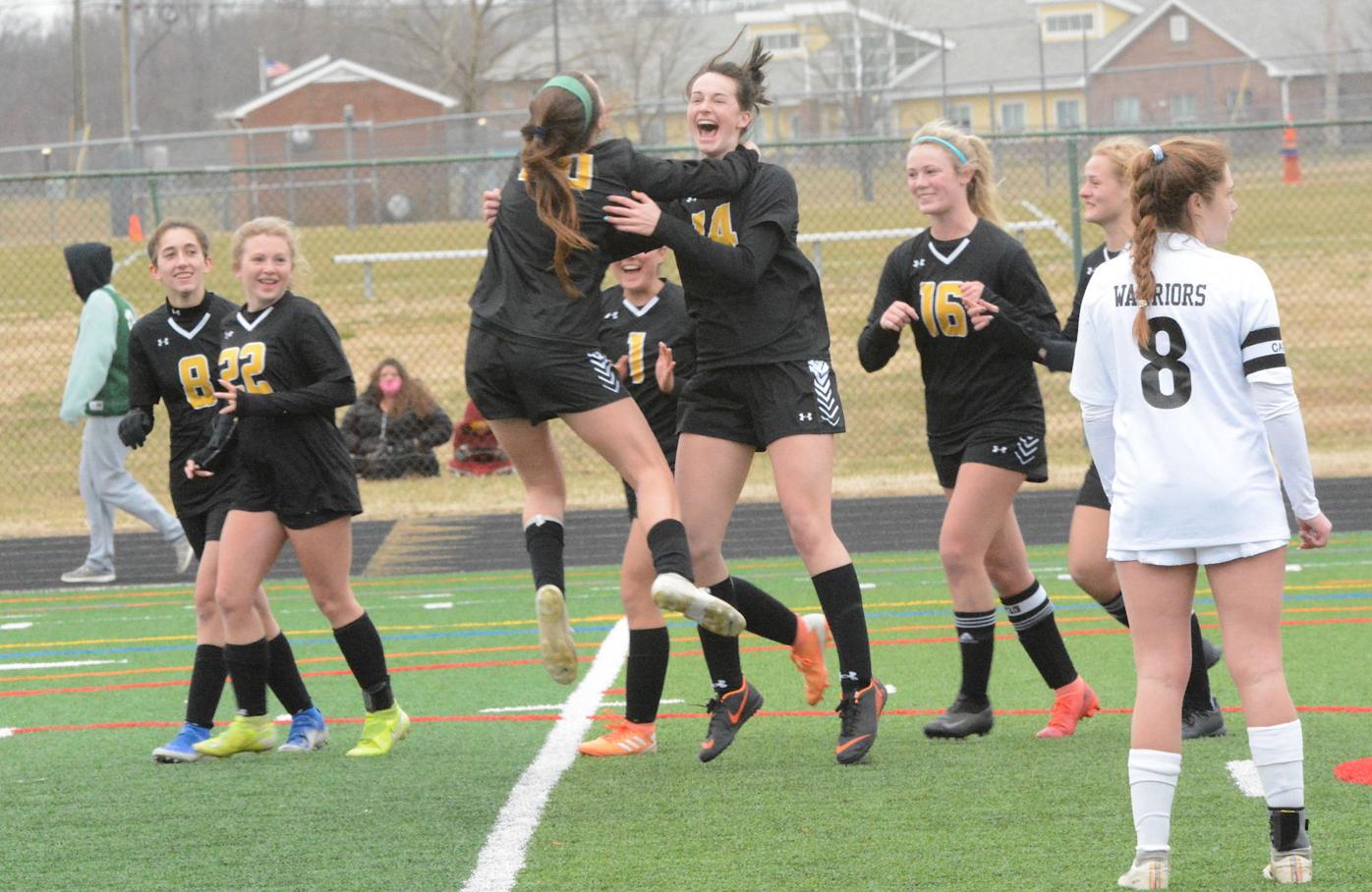 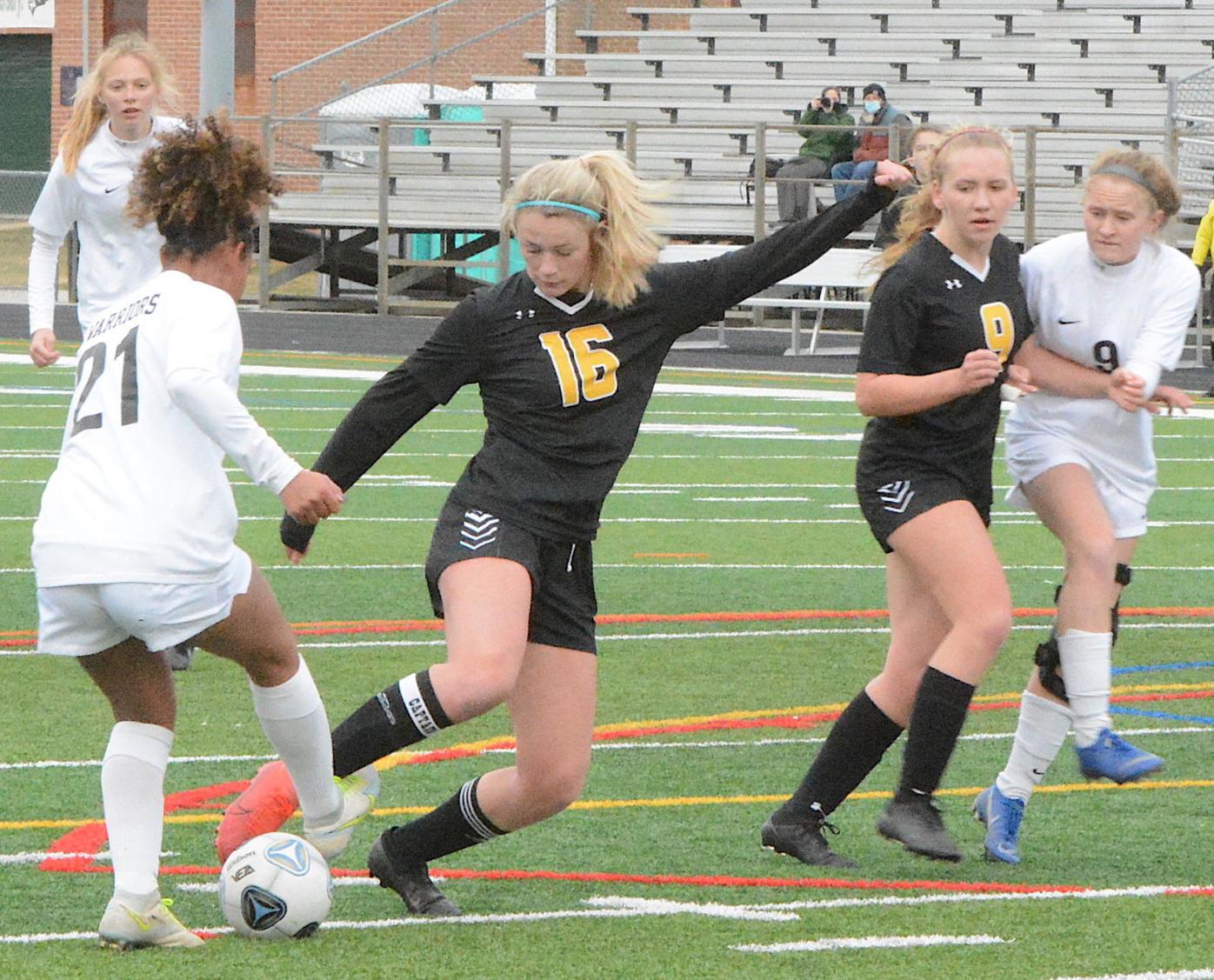 CENTREVILLE — Mike Kern thought it had a chance.

Ryleigh Jordan wasn’t so sure.

“I thought it was going to go right over,” Jordan said of a ball she struck from 30 yards in front of the goal.

But Jordan’s shot arced nicely toward the upper left corner, cleared the outstretched finger tips of Easton keeper Jessica Millard and settled into the net with 14 minutes, 48 seconds remaining Tuesday to give Queen Anne’s County High’s girls’ soccer team a 2-1 victory over Easton at Lions Stadium.

“Overall I thought we played well,” said Queen Anne’s head coach Mike Kern, whose team improved to 2-1, with all three games decided by 2-1 scores. “I thought we possessed well. Second half I said, ‘All it takes is one.’ In the second half, we were hungry, and came out strong the first 10, 15 minutes. It took us a while to get that first goal.”

Down 1-0 at half, the Lions almost got that first goal in the sixth minute of the second half when a hard roller skidded through two Warrior defenders and past the screened Millard before banging off the left post and getting quickly covered by Easton’s goalie. Less than two minutes later, Millard (16 saves) sifted through a crowd and stopped another shot to preserve Easton’s shaky one-goal lead.

But with just over 22 minutes remaining, Queen Anne’s Jess Wright guided a corner kick through the box that found Ella Pinder, who drove in the equalizer.

“We worked together to get the cross over and I was there to knock it in,” Pinder said.

“Jess played a great ball and Ella ran right through it to the goal,” Kern said. “It was a great goal for us. Ella’s been playing really well lately.”

Queen Anne’s continued pressuring Easton’s defense. A little over a minute after Pinder tied the game, Jordan sent a shot that banged off the crossbar of the football goal post hovering over the soccer goal. Jordan hit another shot wide right, then watched Milligan drop to her knees to deny another Lions’ bid for the go-ahead goal.

Queen Anne’s worked the ball through the center of the field where Jordan again gained possession and booted a floater on goal.

“No,” Jordan answered when asked if she thought her ball was going in. “I was trying to aim for the top left corner and that’s about where it went in.”

“She hits a lot of shots outside the 18 and she’s scored many goals that way,” Kern said of Jordan. “And as soon as she hit it I had a feeling it was going in. I was just hoping it stayed on goal and it did. She has a foot.”

The Warriors, who suffered their second one-goal loss of the young season, nearly took a 1-0 lead in the 14th minute when Lily Osborne received a cross off left wing from Julia Hammons and kicked it over the crossbar.

Just over two minutes later though, Osborne fed Hammons, who pushed forward and with Athey coming out of the goal, tucked the ball inside the left post for her fourth goal of the season and a 1-0 lead.

“The Hammons girl, she’s good,” Kern said. “We tried to make sure we had her accounted for. They fed a great ball to her and she made a great run and was able to put it away for an easy goal there.”

Queen Anne’s almost scored the tying goal with just over 11 minutes remaining in the half, but Millard made a quality save on a point-blank shot to keep the Warriors up one.

“First half I think we did a good job of using our width when we were on offense and utilizing each other as a team; working passes together and kind of catching them off guard on their defensive end with some of our plays going forward,” Easton head coach Elle Pennington said.

But the Warriors mounted little offense in the second half.

“I think they just came out with the momentum going forward and we started to get tired and we struggled to make good passes.” Pennington said of the second half. “And when we finally forced a turnover we’d just kind of give it back to them. So we couldn’t catch our breath at all in that second half.”

RIDGELY — Rachel Guerra had seven kills, and Brooke Loveless had 15 service points, including six aces, as Kent Island notched its second consecutive sweep with a 25-10, 25-19, 25-19 victory over the Bulldogs.