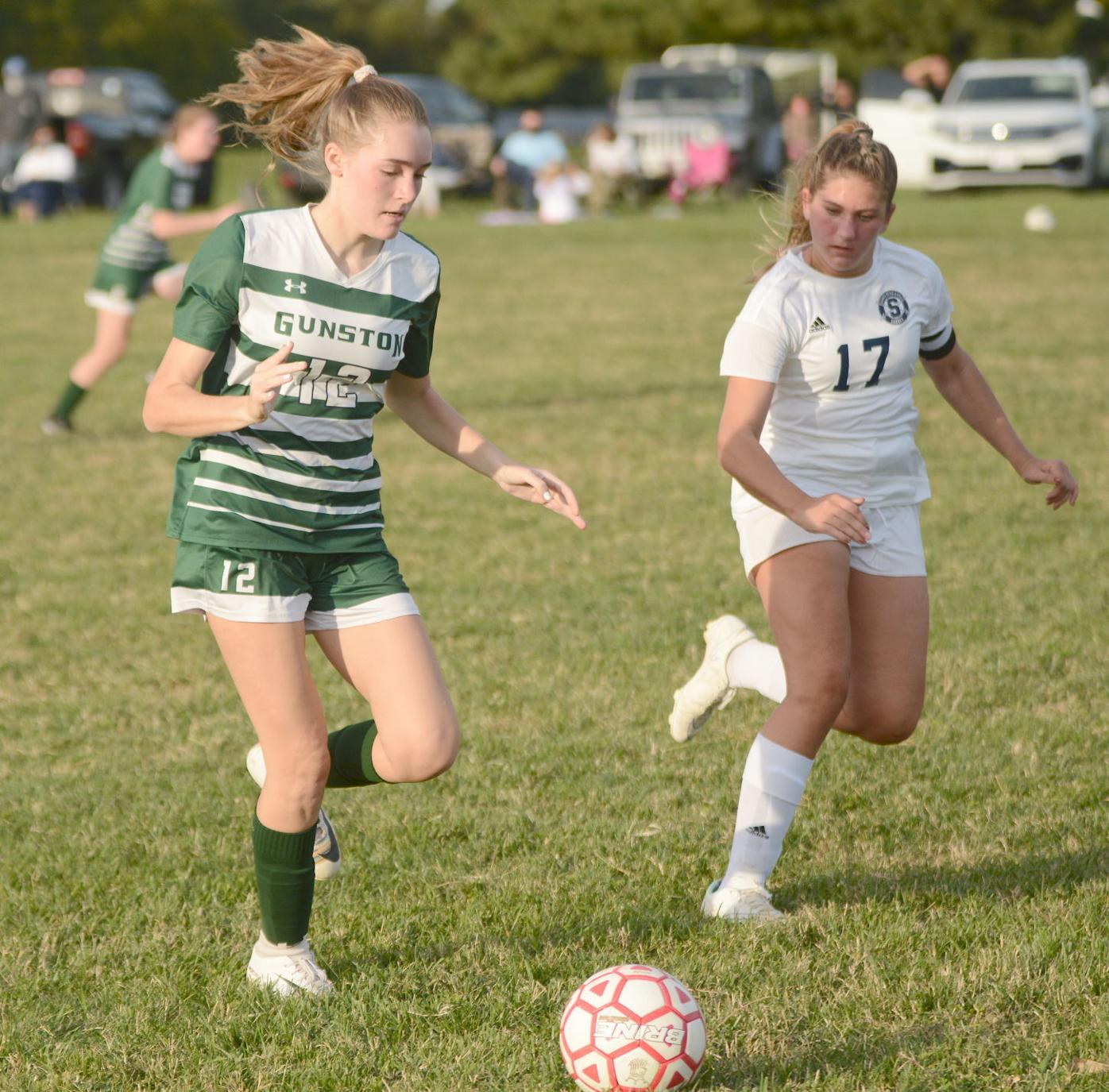 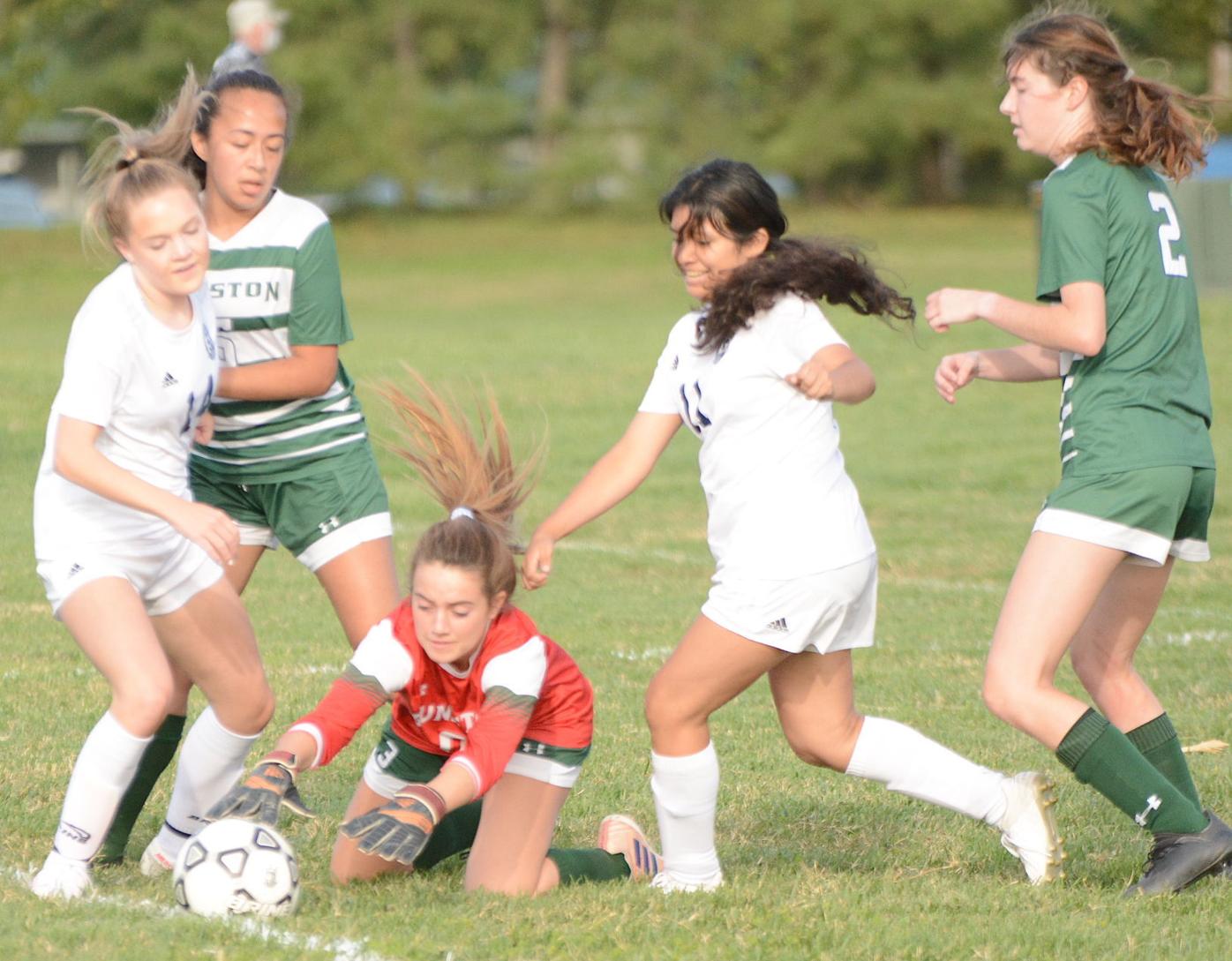 Gunston goalie Olivia Hershey reaches the ball before Saints Peter and Paul’s Ellie Kreiser (14) and Mayerli Loaiza-Paucar (11) can get a foot on it during Friday’s first half. 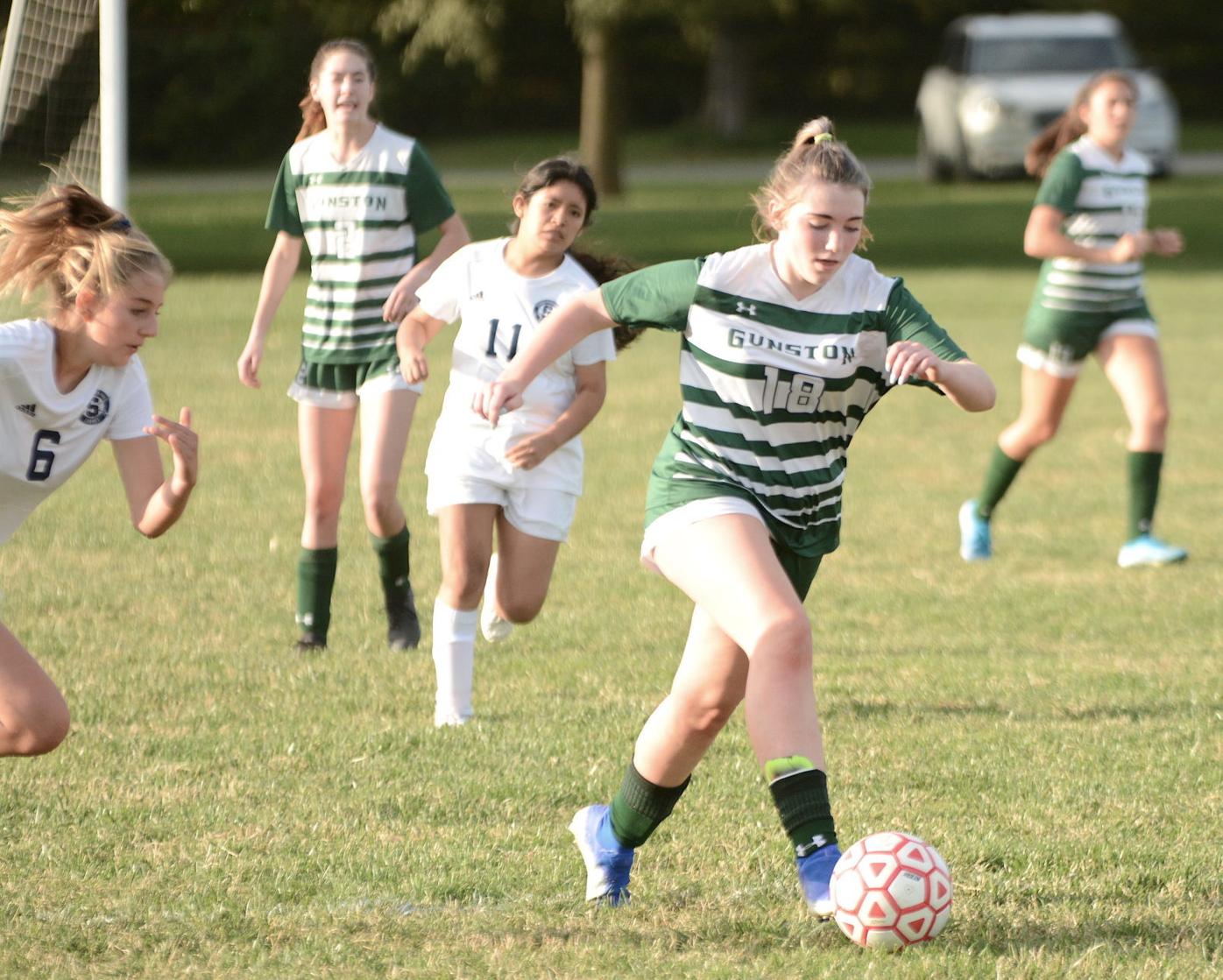 Gunston’s Aidan Ireland (18) drives through the midfield during the second half of Friday’s game against Saints Peter and Paul.

Gunston goalie Olivia Hershey reaches the ball before Saints Peter and Paul’s Ellie Kreiser (14) and Mayerli Loaiza-Paucar (11) can get a foot on it during Friday’s first half.

Gunston’s Aidan Ireland (18) drives through the midfield during the second half of Friday’s game against Saints Peter and Paul.

CENTREVILLE — Jon Mellinger had seen this scenario way too many times before.

“In years previous we would give up a quick goal, or we’d give up a bad goal, and we would really play on our heels. And that really put us in a tough spot,” The Gunston School’s girls’ head soccer coach said. “Today, when the ball went in, the girls weathered the storm. And that’s what we needed to do.”

Senior Bella Adams had a hat trick, scoring twice off Aidan Ireland assists, and goalie Olivia Hershey let nothing get past her in the second half Friday, Oct. 9, as the Herons erased a one-goal deficit en route to a 3-1 victory over Saints Peter and Paul — a win that’s believed to be Gunston’s first ever over the Sabres in program history.

“Gunston (girls’) soccer I believe started in 2008,” said Mellinger, the school’s athletic director who is now in his fifth year as girls’ head coach. “Last year we had Saints Peter and Paul on the ropes. We were up one goal with about 10 minutes to go (in regulation), they tied the game and they won in overtime.

“That was a really tough end for the seniors that were on the team, and the juniors who came back and are now seniors this year,” Mellinger added. “And so I think that was sort of sitting in the back of their minds, because then we went and played them last year in the (Eastern Shore Independent Athletic Conference) playoffs and they beat us pretty soundly, 5-0. So this was their last chance to play them in soccer. We could see them in the playoffs, I don’t know yet. We’ll see. But yeah, they did a great job today and I’ve very, very pleased with the effort.”

The defending ESIAC champion, Saints Peter and Paul (0-1) had only 11 players for its season opener Friday, and so Mellinger and Sabres head coach Jess Kile agreed to play nine to a side, allowing the visitors two subs.

Gunston (1-1), which lost its season opener 4-0 to Worcester Prep on Sept. 25, fell behind 1-0 before the midway point of the first half when Sarah Kile converted Leila Robinson’s feed for a textbook goal.

“Give and go; perfect shot on frame,” Coach Kile said. “All around, was beyond beautiful.”

The Sabres had four corner-kick opportunities in the final 15 minutes of the first half, three coming with less than 3:30 remaining, but couldn’t put another ball past Hershey, and carried a 1-0 lead into halftime.

Two of those pieces were Ireland and Adams.

Robinson came back to send a sinking line drive on goal that Hershey dropped to her knees to stop with 30:32 left in the half. Sabres senior keeper Amanda McKinnon preserved the 1-1 deadlock with back-to-back saves less than a minute apart.

Then with with 24:37 left in the game, Ireland pushed another cross from right wing that Adams squeezed between McKinnon and the right post for a 2-1 Herons lead.

“We’ve been down countless times,” Adams said. “I never lost faith in my team. I knew we just had to pull it together, make sure we were communicating, do everything we’ve done in practices to get it back in the goal. The past week we’ve worked, worked and worked and worked, and it really paid off today.”

Robinson almost answered a little over a minute later, when her direct kick from about 30 yards out banged off the right post and fell away.

Adams completed her hat trick with 5:47 remaining, when she got possession of a loose ball inside the box, and with no one marking her, easily knocked it into the back of the net to virtually seal a victory over their longtime rival.

“Oh, it was pretty sick,” Adams said of her hat trick. “Still processing it honestly, but it feels pretty good.

“It’s been four years coming,” Adams added of finally defeating Sts. Peter and Paul. “We haven’t beaten them in the history of women’s soccer. We’ve been waiting four years for this. I know the seniors have. It was just a whole team (effort).”

Saints Peter and Paul couldn’t mount any serious threats over the remaining time, though a harmless ball rolled toward Hershey as time expired.

“We spent a lot of time with her (Hershey) in practice this week, because you know we came out and you get four goals scored on you by a very talented Worcester (Prep) team,” Mellinger said. “Saints Peter and Paul is also extraordinarily talented; got some big legs, can shoot the ball from outside. So we worked on that a lot in practice. And so she was ready. She came ready to play. She elevated her game and when she plays well she makes everybody else on the field better.”