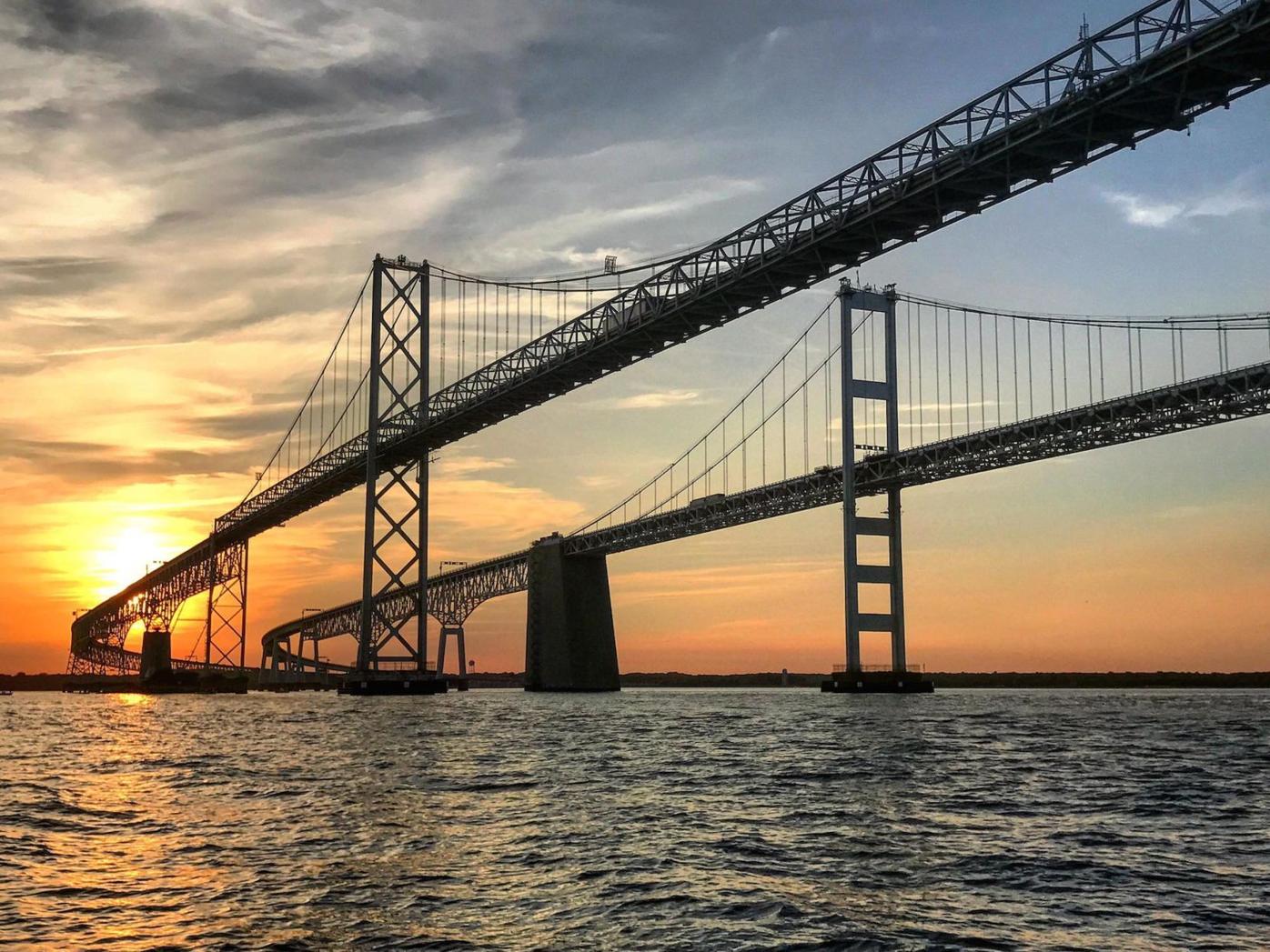 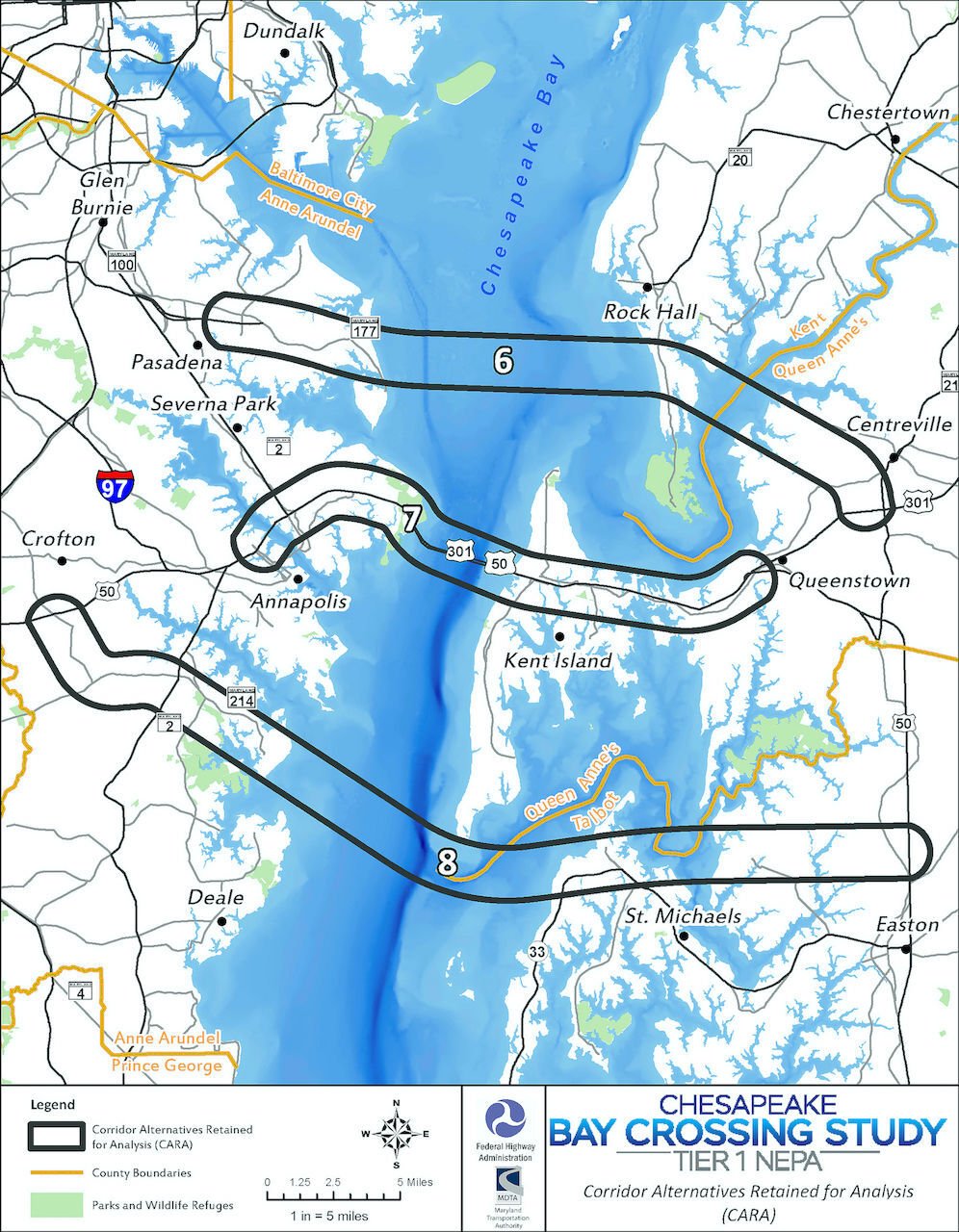 This map from the Bay Bridge Crossing Study shows the final three corridors under consideration by the Maryland Transportation Authority for a new bridge crossing. The MTA recently recommended building alongside the current parallel span (the middle option) from Sandy Point to Kent Island.

This map from the Bay Bridge Crossing Study shows the final three corridors under consideration by the Maryland Transportation Authority for a new bridge crossing. The MTA recently recommended building alongside the current parallel span (the middle option) from Sandy Point to Kent Island.

As I was looking thru the Bay Times/Record Observer, I came across an article entitled, “Anne Arundel County responds to Bay Crossing Study Draft Environmental Impact Statement” and felt I needed to respond to the statements made by Anne Arundel County as they relate to a “Third Span”. These comments are mine, and only mine, because the Queen Anne’s County Commissioners have not taken a position on this topic. The article starts out, and doesn’t take long, to label this study as “a blueprint for projecting sprawl”. It seems Anne Arundel County is more concerned with so called “sprawl” then they are with solving or relieving the traffic congestion on the Broadneck peninsula. I can only assume that they would rather see massive traffic backups then to see anyone else move to the eastern shore. I recall a statewide septic bill that pretty much put an end to sprawl by mandating sewage treatment facilities for any developments greater than six building lots.

So, if you have 100 acres, or 1,000 acres you can only have six buildable lots. I would also like to say that Queen Anne’s County is second in the State of Maryland for our conservation efforts in preserving farmland, and we will soon be first, that is a priority of mine.

Anne Arundel County goes on to say, “there has been no material change in annual or average daily traffic on the bridge”. Queen Anne’s County installed our own traffic counters four-years ago, and that statement just isn’t true. One thing that the public needs to understand is that almost all traffic studies will use “Daily Averages”, so that means they average the traffic counts over a 24-hour span. All of us know that there is an 8-10-hour window every evening where there is little to no traffic. What our traffic counters did show was the maximum lane capacity on the two bridges as 1,200 vehicles an hour, per lane. Whereas, Route 50 is rated for 1,500 cars per hour, per lane. And when a backup starts, from congestion, or an accident, that 1,200 per hour, per lane drops dramatically.

They also go on to say “the DEIS should address dramatic reductions in traffic demands as a result of the COVID-19 pandemic”. The pandemic is over, and traffic will soon be back with a vengeance. So, while we all enjoyed much lower traffic volumes over the last year, that is not the new normal, besides, commuter traffic has never been the issue. We, Queen Anne’s County, do not have a traffic problem from mid October until mid-May, that’s our commuters. Our problem, and it’s Anne Arundel’s problem too, is the “Beach Traffic”. Daily counts, weekly counts, do not show the true impact of “Beach Traffic”.

So where do we go from here? First and foremost, we need to stop calling this project “The Third Span” and start calling it what it really is, a replacement bridge for the aging bridges now in place. The Bay Bridges have been in constant construction for the last 20 years. Hundreds of millions of dollars have been spent trying to maintain them, and the State/MDTA is doing everything they can to keep these two bridges open and safe. Everyone equates a so called third span with more traffic, and more congestion. I hear all the time, Route 50 can’t handle the traffic and now we are going to add another span?

Again, I would say that a new span will take the place of one, if not both bridges. This project would take into account Route 50 from the 50/301 split in Queen Anne’s County, to the 50/97 split in Anne Arundel County. They will be looking at overpasses, on and off ramps, the Severn and Kent Narrows bridges, additional lanes possibly, and other improvements to keep the traffic flowing for decades to come. The bottleneck for years has been the lack of capacity on the existing bridges. Remember, Route 50 is rated for 1,500 cars and hour, while the bridge lanes have never gone over 1,200 vehicles an hour. MDTA started contraflow decades ago to give east bound Route 50 a third lane, (that is when there is two-way traffic on either bridge) which is the most dangerous thing you can do on any bridge, and now it is a daily event on the two bay bridges. Contraflow alone warrants a new bridge with capacity to eliminate this deadly practice.

For the last 70 years, ever since the first bridge opened, roads have been built to move commerce to and from the two shores of the Chesapeake. This also ushered in the beginning of the ocean front resorts in Maryland and Delaware. By the time the second span was up in 1973 we had “Reach the Beach” which removed a great deal of red lights, added bypasses, and made traveling to the beach affordable and convenient. This also brought another lane to Route 50, Route 2 went to two lanes in each direction, 97 was constructed, 404 went to two lanes in each direction, and now we have a bypass from 95 to 301 in Delaware that leads directly to the Bay Bridges.

There is an old saying, “All roads lead to Rome” and when it comes to traveling to the beaches from anywhere west of the Chesapeake Bay, you have only three options. Drive around the top of the Chesapeake Bay, cross the bay where it meets the ocean, or right here at the Route 50/301 crossing. Route 50 has no issues handling the traffic, the issue has and will continue to be the lack of capacity on the existing bridges.

One thing people are not talking about is the age of the existing bridges. They will be coming to the end of their life cycle and does anyone think the state can afford to build a crossing somewhere else and replace these two bridges?

Let’s assume the bridge will be built where the two are now, we are still looking at approximately 15 years before anyone is driving on it. Now if it goes somewhere else, you have land acquisitions, connecting roads, lawsuits, and the environment to consider, so let’s say 20-25 years before that could happen. How long can the Broadneck Peninsula or Queen Anne’s County last with the worsening traffic congestion? Remember, for the last 70 years, anything built at the beaches and anyone who wants to visit the beaches must travel thru the Broadneck Peninsula and Queen Anne’s County.

In closing, I would like to say I support a replacement bridge to get traffic thru this corridor and on its way, wherever that may be. The existing location is without a doubt the best solution to the traffic issues because the traffic is there and it’s not going anywhere else. So, for all those who may say no to this location please tell us how you intend to deal with the traffic for the next 20 years?