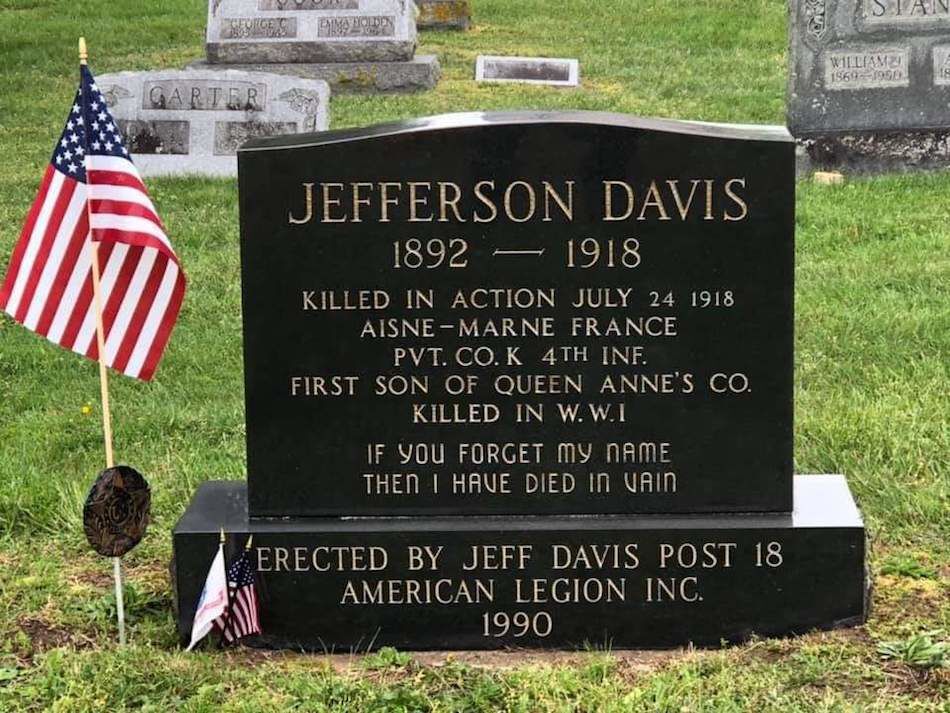 Jefferson Davis was the first Queen Anne’s County man to be killed in World War I, and American Legion Jeff Davis Post 18 in Centreville is named in his honor. His tombstone can be found in the Church Hill Cemetery. 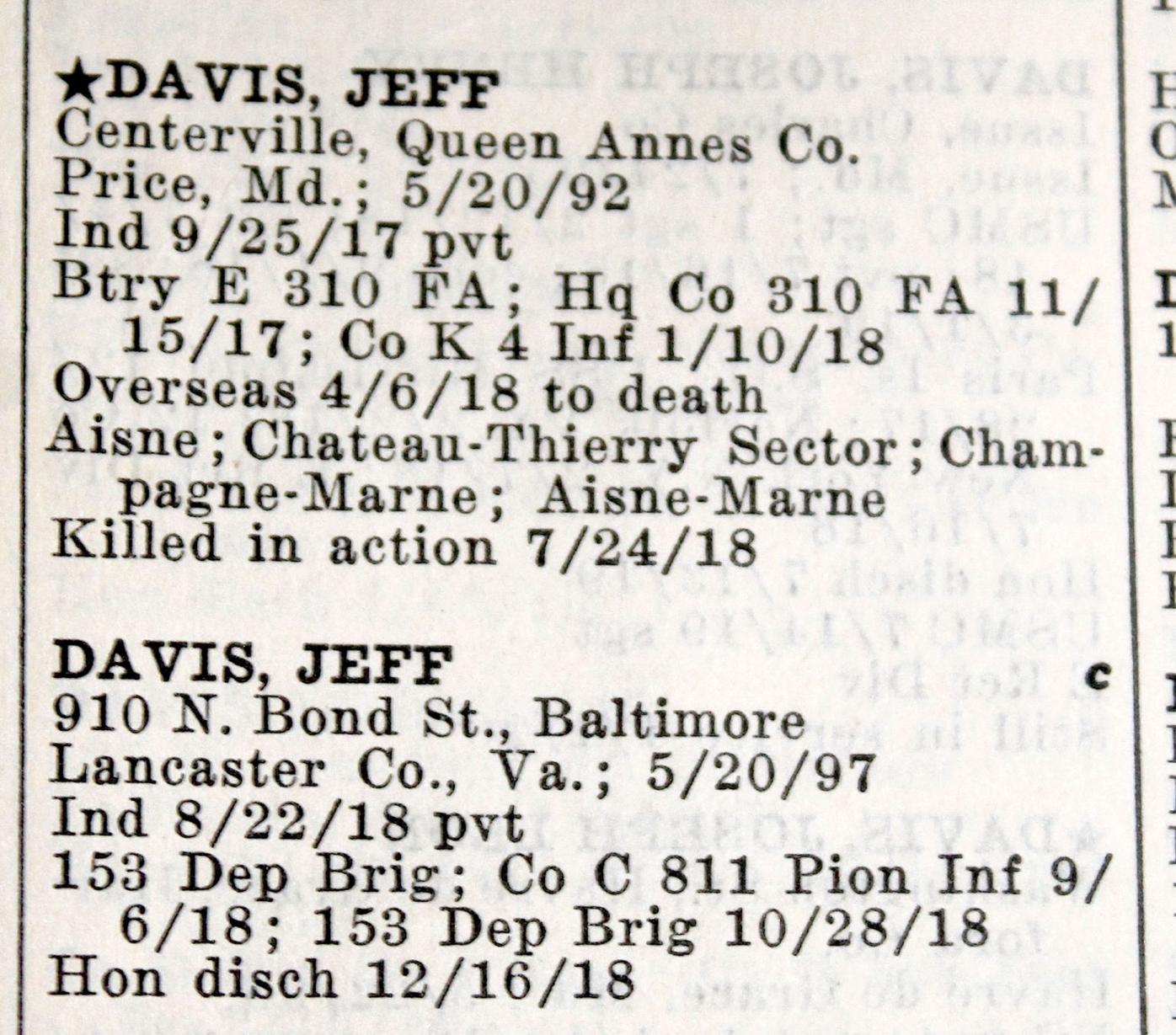 American Legion Jeff Davis Post 18 is named for the late Jeff Davis of Centreville, who died during World War I in France. Record of his service and death is listed in a book titled “World War Service Records,” kept at the Centreville Legion as part of its museum display.

From the mural painted on the outside the Centreville American Legion, a life-size image the late Jeff Davis of Centreville, who was killed during World War I in France.

Jefferson Davis was the first Queen Anne’s County man to be killed in World War I, and American Legion Jeff Davis Post 18 in Centreville is named in his honor. His tombstone can be found in the Church Hill Cemetery.

American Legion Jeff Davis Post 18 is named for the late Jeff Davis of Centreville, who died during World War I in France. Record of his service and death is listed in a book titled “World War Service Records,” kept at the Centreville Legion as part of its museum display.

From the mural painted on the outside the Centreville American Legion, a life-size image the late Jeff Davis of Centreville, who was killed during World War I in France.

CENTREVILLE — The first American Legion post formed in Queen Anne’s County is in Centreville, the Jeff Davis Post 18, so named after the first county soldier killed in action in France in World War I.

Jefferson “Jeff” Davis was the oldest son of Mr. and Mrs. Jefferson Davis, who lived at Indiantown Farm, near Centreville. He was a private with Company K, 4th Infantry Division, and was killed in Aisne-Marne on July 24, 1918.

The post was formed in 1930, with 55 charter members. E. Hall Covell was named first post commander, and the veterans met in the Armory in Centreville, until the building of the present post home on Route 213 at the southern end of Centreville in 1950.

A large photograph of Davis in his Army uniform at age 25 is framed in the post home.

A newspaper clipping that came with the photo reported that Pvt. Davis was born on May 20, 1893, and that he spent his childhood in Price, attending public school there and was considered an excellent baseball player. He joined Sunday school at Bethany ME Church and kept his membership there after his parents moved to Indiantown Farm.

Davis was the first, but not the last, Queen Anne’s County service member killed in action in World War I. He answered his nation’s call and enlisted in the Army Sept. 25, 1917.

Davis was among the first contingent of draftees to leave Queen Anne’s County for Camp Meade on Sept. 27, 1918. He was assigned to Company K, 4th Infantry, and went overseas early in the spring of 1918.

It was noted that his first letter, telling of his arrival in France, was received by his parents on April 16, 1918. He wrote several letters, and in all of them he appeared bright and cheerful. The day the telegram arrived for his parents from the War Department, notifying them of his death, his mother had received a letter written on July 12, just 12 days before his death.

His service was brief; he paid the price for liberty within the year. On July 25, 1918 he was counted among the fallen ones, the thousands of doughboys killed during the horror of trench warfare.

A feature about Jeff Davis in the Record-Observer stated that a newspaper story telling of the remains of the soldier being returned to the United States and that a memorial service held at the Bethany ME Church in Price, told a few more facts about his death in France.

It reported that his unit had been sent to the front lines immediately upon arrival in France. On July 24, in one of the most terrific of the early drives launched by the American Expeditionary Forces, Davis was struck by shrapnel and wounded three times. He died three days later in a field hospital. His body was interred in a French cemetery until removed and returned to the United States with several thousand other coffins of American dead.

In speaking of his early life, the newspaper article stated:

“Jeff Davis was the soul of honor, and did not have a bad habit in the world. His first and last thought was always for his mother. She was his closest friend, and his one regret in joining the Army was the necessitated separation from his parents.”

Another article printed upon the return of his casket to the U.S. said:

“He was a clean and manly lad and enjoyed the respect and esteem of a large circle of friends.”

In the 1930 minutes of the Legion post, written by Walter E. Woodford, adjutant, it tells of the post members agreeing to purchase a lot in the Church Hill Cemetery to bury Davis. A larger gravestone was erected by the post in 1990, and a ceremony was often held by the grave site on Memorial Day.

The gravestone lists his full name at the top: Jefferson Davis, and inscribed with his other military background, it reads: “If you forget my name, then I have died in vain.”

Actually, according to other military records, Davis was not the first county native to die in France in World War I. The records state that James E. Potts, of the Trench Mortar Battery, who was born in Queen Anne’s County, was killed in March 1918. However, he had not been a resident of the county for a number of years and had enlisted in the service from Baltimore.

Reprinted from the Record-Observer. Dan Tabler is a former editor, writer and longtime columnist for the Record-Observer and even did a stint in advertising. He is an Army veteran who served stateside during World War II. Angela Price also contributed to this article.

It was recently brought to our attention that Camp Wright changed the name of one of their cabins that was previously named after Jeff Davis Post 18. In their ignorance, they have equated the name of our post with exclusion, racism and bigotry because the hero to which the post is named after happens to have the same name as the Confederate President.

Jeff Davis Post 18, is named after a WWI soldier from Queen Anne's County who lost his life fighting for freedom. His name has nothing to do with exclusion, racism or bigotry. If Camp Wright wanted to rename a cabin that is certainly their prerogative, however to do so simply because of a common name is shameful.

American Legion Post 18 donates in the neighborhood of $65,000 to organizations in the community of Centreville and Queen Anne's County every year that support all our families such as soccer leagues, Scouting troops, youth programs, and other nonprofits that make all of our lives better. Camp Wright will not be one of those organizations in the future.

This upcoming weekend we will remember our fallen heroes on Memorial day. We will not allow organizations like Camp Wright to diminish their honor.