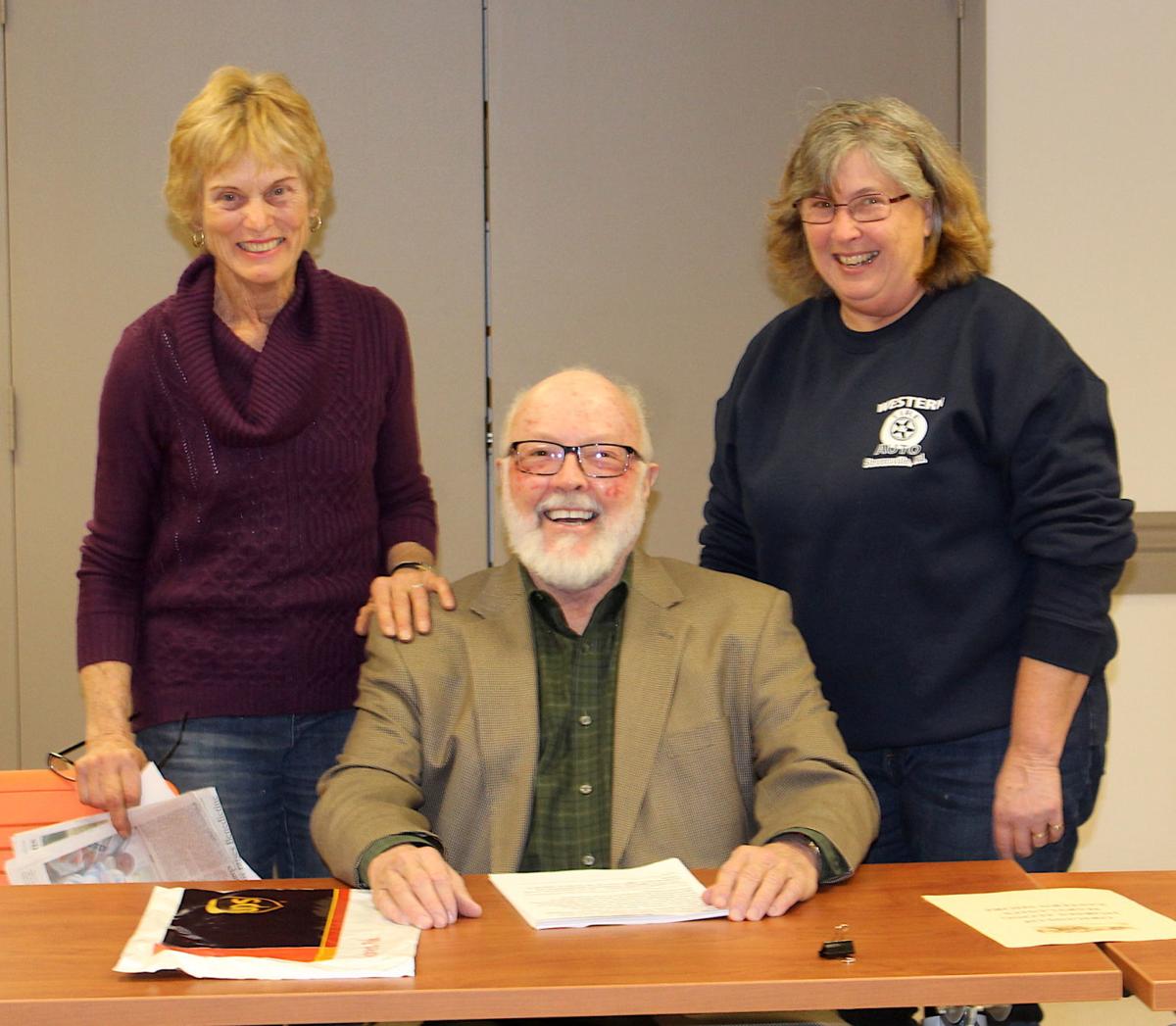 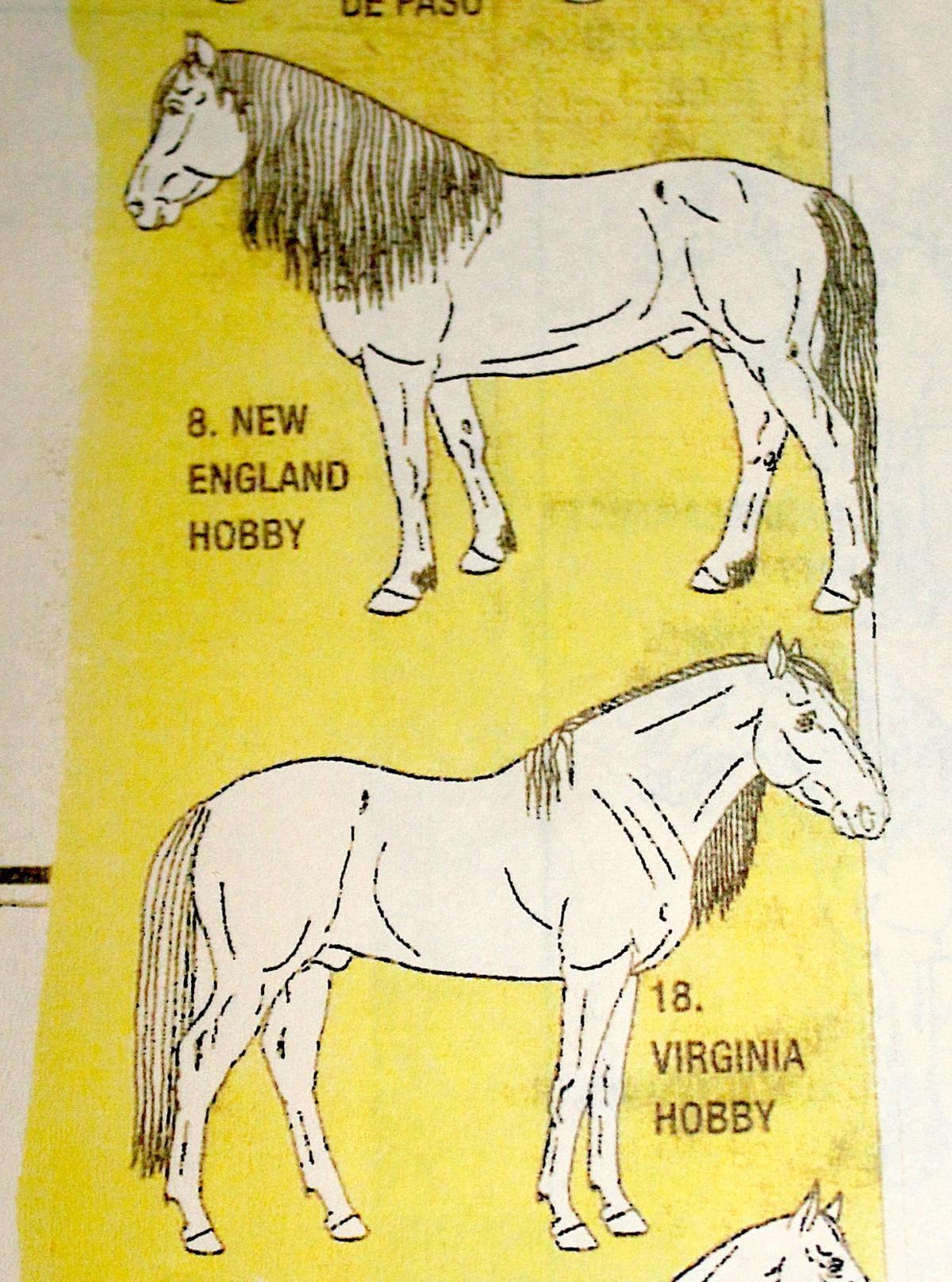 Sketches of what the first horses to come to the Eastern Shore may have looked like, as presented by equestrian David Turner of Chestertown during his lecture to the Tuckahoe Equestrian Club Wednesday, Nov. 20. The horses were gaited New England (top) or Virginia Hobby horses.The sketches, contributed by Deb Bennett, show what these popular English-bred horses looked like during the colonial era of American history. Turner said, “Stockily built, they probably were the precursor to the draft horse.”

Sketches of what the first horses to come to the Eastern Shore may have looked like, as presented by equestrian David Turner of Chestertown during his lecture to the Tuckahoe Equestrian Club Wednesday, Nov. 20. The horses were gaited New England (top) or Virginia Hobby horses.The sketches, contributed by Deb Bennett, show what these popular English-bred horses looked like during the colonial era of American history. Turner said, “Stockily built, they probably were the precursor to the draft horse.”

DENTON — David Turner of Chestertown spoke about the “Origins of Horses along Maryland’s Eastern Shore” Wednesday, Nov. 20, at the Tuckahoe Equestrian Club’s monthly meeting. The club sees to the year-round care of Tuckahoe Equestrian Center, located at Tuckahoe State Park in Queen Anne/Ridgely.

A lifelong equestrian, Turner has in recent years started research on the arrival of the first horses to the Eastern Shore of Maryland. Turner told the TEC members, “I started doing some serious research about when the first horses arrived on the Eastern Shore during colonial times. What type horses were first brought here, who brought those horses here, and what were they used for?”

He has done his research from a variety of archive sources, but especially state archives, reading various documents listing livestock arriving on ships, reading wills of people who died during colonial times, to mention just a few.

Turner said, “The first horses, of course, were brought to the Americas, coming through the Caribbean islands, by the Spanish in the 1500s. In the early 1600s, Europeans imported horses and ponies to North America. These horses came through the Dutch West Indies. Since most transportation was done in colonial times by traveling on water routes, land routes had to be covered on horseback. There became a growing need and demand for horses.”

William Claiborne (1600-1677) had a trading post on Kent Island, Turner said. “Claiborne had close connections with where he’d come from — Virginia, thus we can assume the first horses brought to the Eastern Shore were Virginia and New England ‘Hobby Horses.’ This breed of horse had smooth gaited or trotting gaited horses of the time, a favorite in England. They were precursors of draft horses.”

Turner also provided copies of detailed sketches of different breeds of horses that were popular during the colonial period in the Americas. The hobby horses were among those sketches.

He described the challenges of getting horses to the Americas on ships that often got slowed by little to no winds to bring ships across the ocean.

“When drinking water supplies became low, it was not unusual that horses had to be pushed off those ships in the ocean so the crew could survive the voyage. Thus, many maps of that era had, and still to this day are named ‘horse latitudes.’ In general, a horse was valued at about half the price of a male slave. In the colonial era, the average price for a slave was 150 pieces of eight, so a horse was 75 pieces.”

Turner said, “Horses arrived in the Americas before slaves. However, on later voyages, slaves and horses came on the same ships. About one third of the horses and slaves died on these voyages, the conditions were so bad. It might surprise, but the last state to end slavery after the Emancipation Proclamation, after the Civil War, was the state of New Jersey. They didn’t officially end slavery until the 13th Amendment to the U.S. Constitution officially ended slavery after the Civil War was over.”

“There were three plantations on the Eastern Shore, all had waterfront property,” Turner added, “owned by Richard Tilghman, Samuel Tilghman and Robert Morse. From what I’ve found, all three of these plantations bred and traded horses, especially the plantation owned by Morse. There were up to as many as 400 horses on his plantation. This was around the year 1664.”

Continuing, Turner said, “There is record in 1715 that officials captured wild horses on the Eastern Shore. If traveling by horse from Philadelphia to Annapolis, it was a four-day ride. That included the horse and rider traveling by ferry boat at different locations along the way. There’s record of a Thomas Ringgold of Chestertown leaving his horses to his children in his will. The will stated that his sons were to receive horses, and strangely, he left his two prized carriage horses, named “Favorite” and Pasty,” two Narragansett Pacers, to ‘his son’s mother.’”

Unusual that he didn’t refer to her as his wife, but his son’s mother, noted Turner, “this was in the mid 1750s.”

He also described the island of Aruba as becoming a colonial day “CarMax for horses.” The Caribbean islands, and the like, became early horse trading centers in the New World.

Turner read his presentation quickly during the meeting, as the club’s monthly business also had to be discussed that evening. The club members applauded his presentation when he concluded. He indicated that he’s hoping to eventually publish his research in an equestrian magazine when complete.

Turner grew up in Texas barrel racing and showing reining horses in youth rodeo. He eventually moved to the East Coast and began showing in marathon carriage competitions. Several years ago, he founded the Chestertown Horsemen’s Club to recognize local equestrians who have made significant contributions to the equestrian community on the Eastern Shore.

Tuckahoe Equestrian Club holds its monthly meetings the third Wednesday of each month. During cold weather months, the meeting are held at the Choptank Electric headquarters building west of Denton, off Route 404.