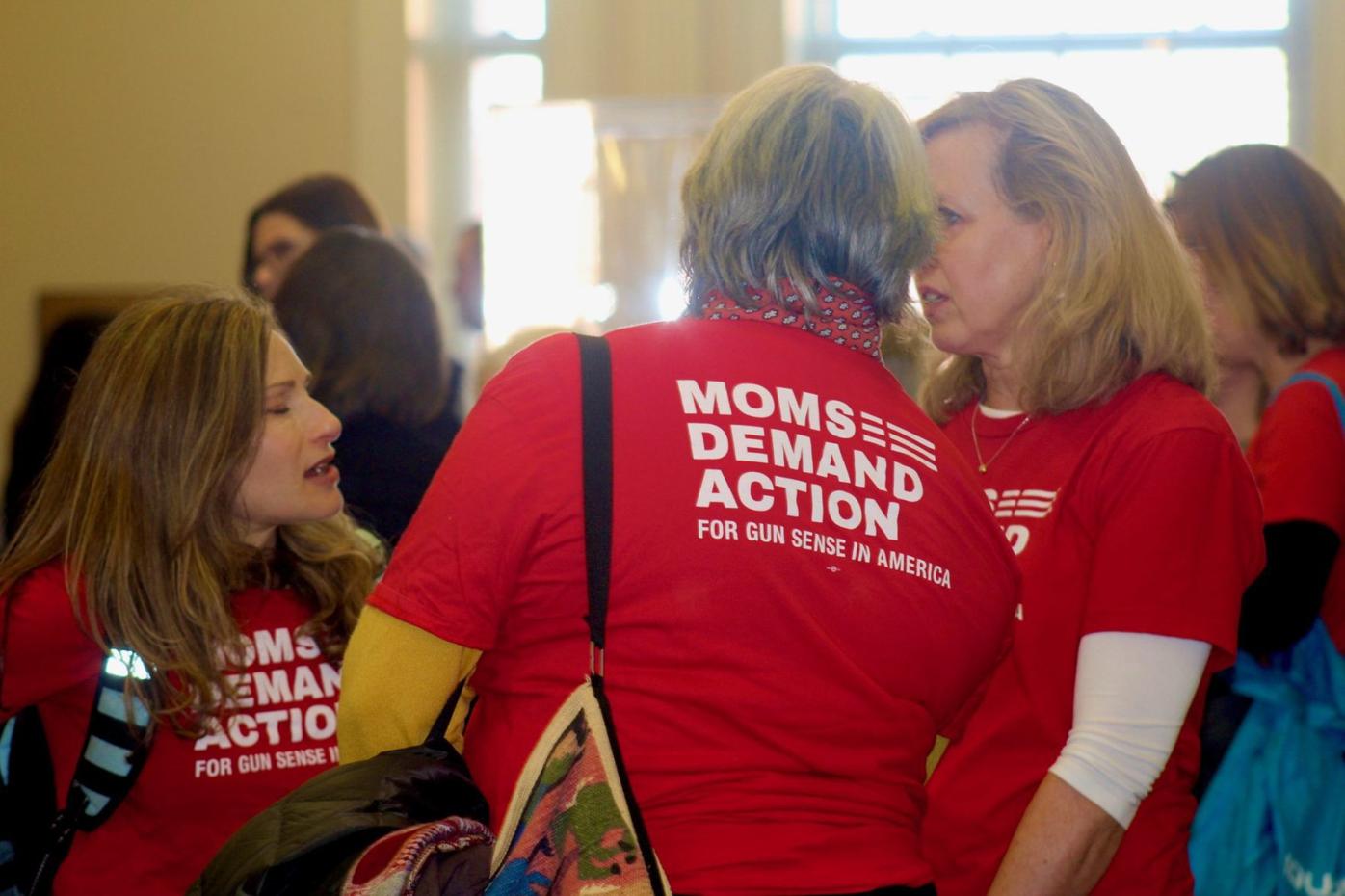 Activists with Moms Demand Action for Gun Sense in America gather outside the Judiciary Committee meeting room in the Maryland House of Delegates building on Wednesday, Jan. 15, to advocate for gun legislation. 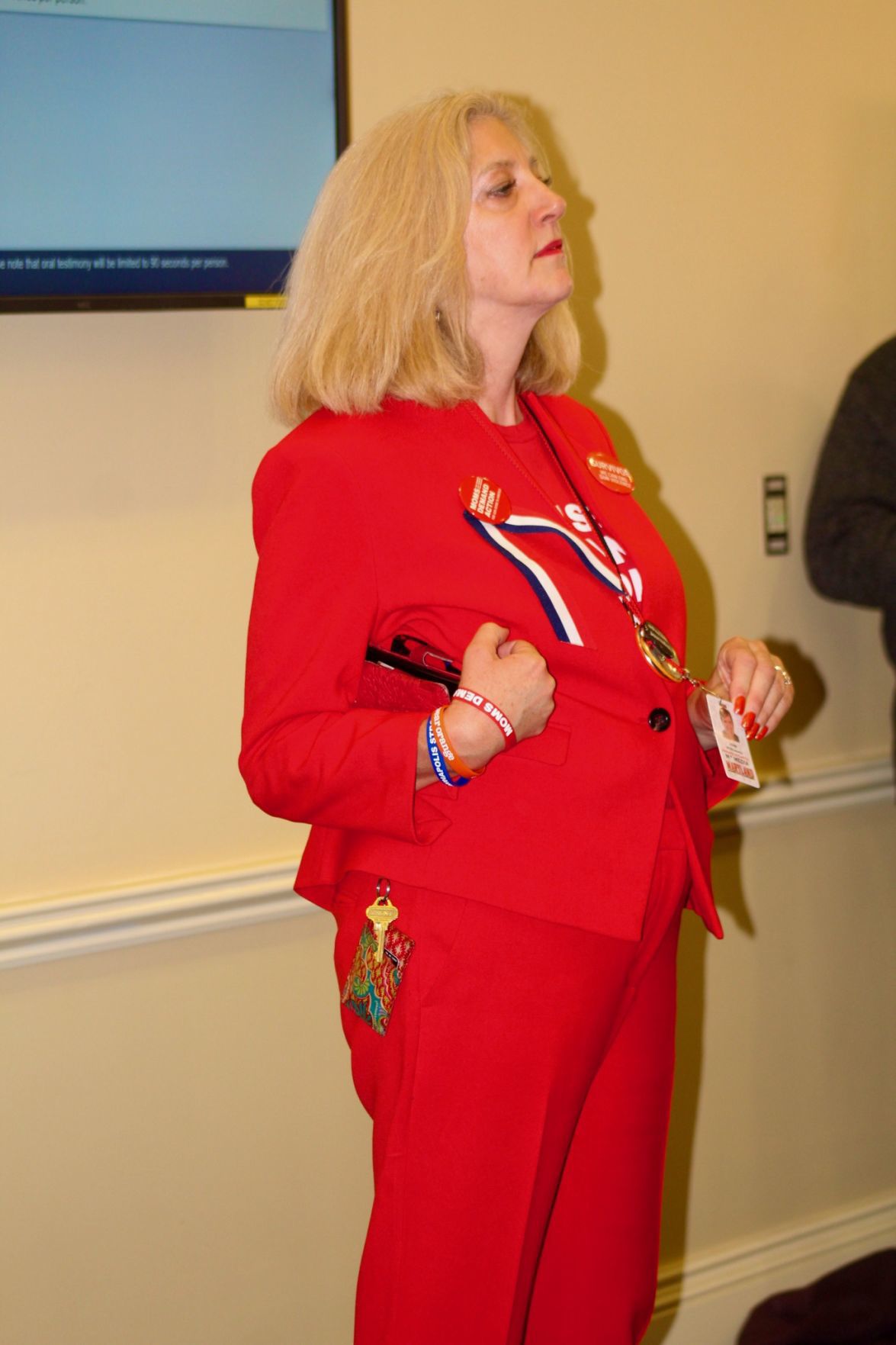 Andrea Chamblee, a gun laws activist and the wife of a journalist who was killed in the Capital Gazette shooting in 2018, fights for gun safety outside the Judiciary Committee meeting room in the Maryland House of Delegates building on Wednesday, Jan. 15.

Activists with Moms Demand Action for Gun Sense in America gather outside the Judiciary Committee meeting room in the Maryland House of Delegates building on Wednesday, Jan. 15, to advocate for gun legislation.

Andrea Chamblee, a gun laws activist and the wife of a journalist who was killed in the Capital Gazette shooting in 2018, fights for gun safety outside the Judiciary Committee meeting room in the Maryland House of Delegates building on Wednesday, Jan. 15.

ANNAPOLIS — A sea of red flooded Annapolis as gun laws adversaries and advocates descended on the capital Wednesday, Jan. 15, to influence lawmakers’ decisions on three pieces of gun legislation being weighed by three separate committees.

House Bill 4 seeks to require background checks for the private transfer of rifles and shotguns. Senate Bill 39 seeks to add .233 and .300 caliber firearms to the regulated firearms list, effectively restricting their obtainability. Senate Bill 55 — before being shot down by the Budget and Taxation Committee during its second reading Wednesday — sought to create an assault weapons buy-back fund in Maryland.

Members of the House Judiciary Committee heard hours of testimony from dozens of people on both sides of the HB4 debate as they weighed the impact of tightening regulations on rifles and shotguns, otherwise known as long guns.

The bill, which was introduced during a previous legislative session, passed through both the Maryland House and Senate, but did not become law in 2019 because the House rejected Senate-made amendments to the language. HB4’s 2020 reintroduction prompted gun lovers and haters to pounce at the opportunity to make their beliefs heard by lawmakers in the State House.

The proposed law would make it illegal for gun owners to transfer their gun to someone else without authorization from a licensee. The licensee is expected to perform a background check on the transferee and then lawfully facilitate the transfer for a “reasonable fee.”

“Transfer” is defined in the legislation as a sale, rental, furnishing, gift, loan or “any other delivery.”

Exclusions include transfers between people at a sport shooting range or gun club; between immediate family members; during a legally organized gun-involved competition, performance or practice; and hunting.

Activists with Moms Demand Action for Gun Sense in America, all of whom donned unifying bright red outfits, queued up in the hearing room to share stories of their experiences with gun violence, arguing to lawmakers that the legislation is “overdue.”

Del. Jeff Ghrist, R-36-Caroline, did not attend the HB4 hearing, but took to Facebook to mobilize his constituents in the days leading up to it. Ghrist wrote, “The hostile firearms haters are moving very quickly this session.”

“They’ve always told us that they would never target hunters and the long guns we use in the field. Of course, those statements were not true and we knew they would begin to go after our shotguns and rifles,” he wrote. “HB4 is the proverbial nose under the camel’s tent.”

While the majority of gun laws activists hailed from the western shore, some Talbot County residents showed up to toss their verbal support for the legislation into the swirl of discussion — one Easton woman saying she supports the law because she lost two people in her life to gun violence.

But perhaps the most vocal of all the activists, in her bright red pants suit, was Andrea Chamblee, the widow of journalist John McNamara, who was murdered in the Capital Gazette shooting in 2018. Chamblee said the impact of gun violence doesn’t stop at a person’s death.

“What has happened to me since my husband was killed, none of it is counted,” she said, holding back tears. “No bullets touched my body, but you can’t tell me there’s not a gaping hole of loss in my chest.”

She said the Capital Gazette staff couldn’t unsee their colleagues falling murdered to the floor or one of the victims begging first responders to save her life so she could get home to see her 5-year-old child.

But opponents of the legislation countered Chamblee’s arguments during their turn to address the committee, saying HB4 wouldn’t have saved the Capital Gazette shooting victims.

They said the number of gun-related deaths in Maryland, specifically by long guns, doesn’t justify a law that restricts the transfer of such weapons.

“Rifles and shotguns account for very few murders in Maryland per year,” they said, adding that the state legislature was “trying to fix a problem that doesn’t exist.”

Data from the Center for American Progress, released in November 2019, shows Maryland experienced 42 mass shootings between 2014 and 2018 — and from 2008 to 2017, the state ranked fifth in the country for highest number of gun deaths, the report showed.

While the data didn’t specify the type of gun involved in each incident, Chamblee argued during the hearing that statistics don’t truly reflect the number of Maryland residents affected by gun violence.

David Weber, the state director of the National Rifle Association, argued that HB4 won’t prevent more deaths, and highlighted the notion that more people are harmed or killed with “blunt objects” than rifles.

But even so, Weber said, the numbers don’t change the fact that the proposed law “infringes on the rights of law-abiding citizens.”

Michael Doherty, board chairman of the Maryland State Rifle and Pistol Association, seconded Weber’s sentiment, adding that the law is “invasive.”

Conaway asked the gun rights advocates whether they thought someone being required to show a driver’s license before driving a new car off the lot of a dealership was “invasive.”

Doherty responded, “yes,” and said the dealer has a right to know that I’m authorized to drive the vehicle on a public road, but the government, he said, “has no right to know” if I’m buying a vehicle.

Doherty continued, saying the further problem with requiring licensing for rifle transfers or purchases is that, even if a criminal is denied lawful access to a firearm, a “criminal’s not going to obey this law.”

“Criminals are criminals by the very definition of the fact that they don’t obey laws,” he said. “They’re not going to obey this one either. They’ll still find a way to find whatever they want to get to use for various purposes.”