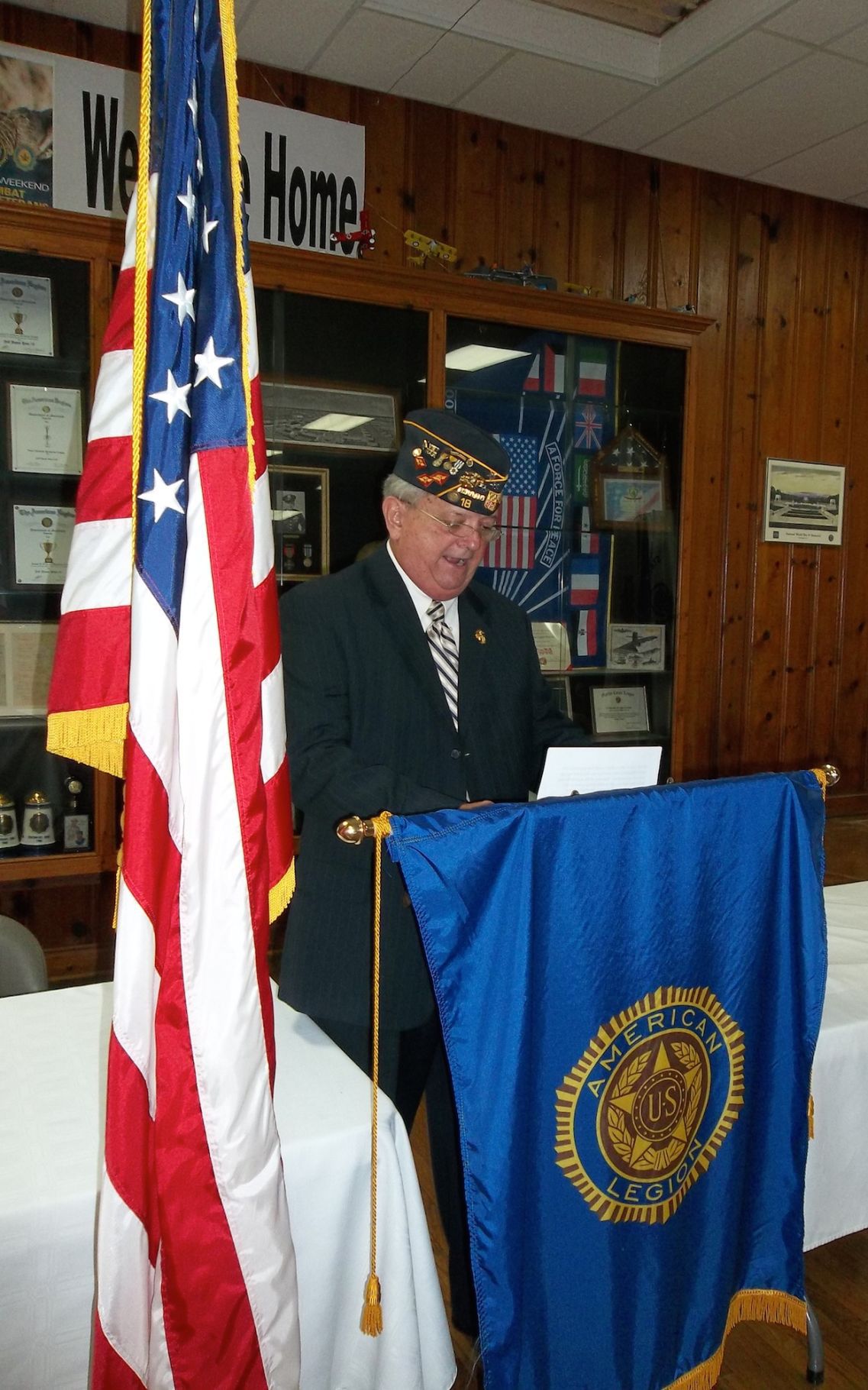 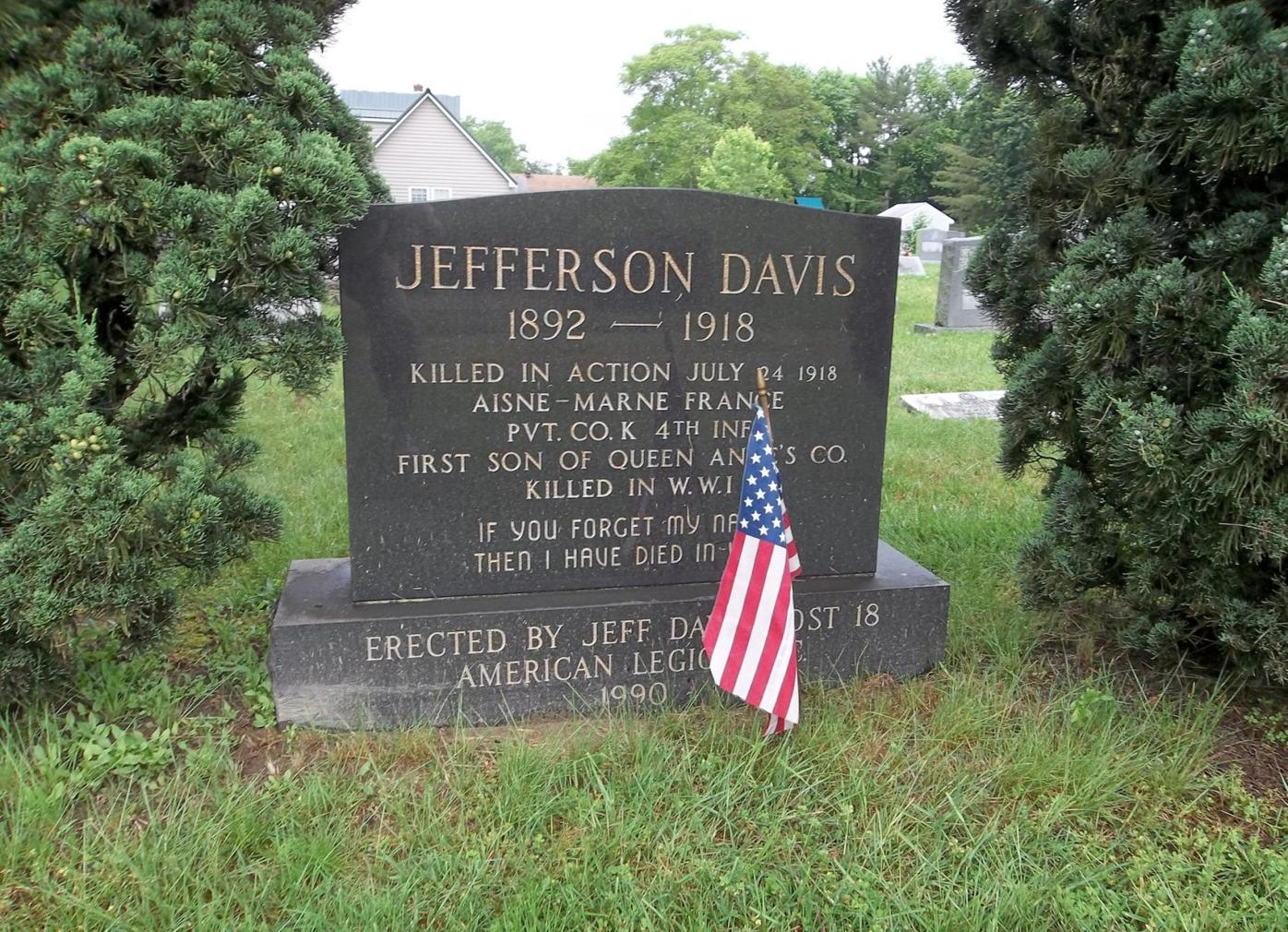 An American Flag flies in front of the tombstone of Jefferson Davis in the Church Hill Cemetery. Davis was the first Queen Anne's county man to be killed in World War I, and the Jeff Davis Legion Post in Centreville is named in his honor. 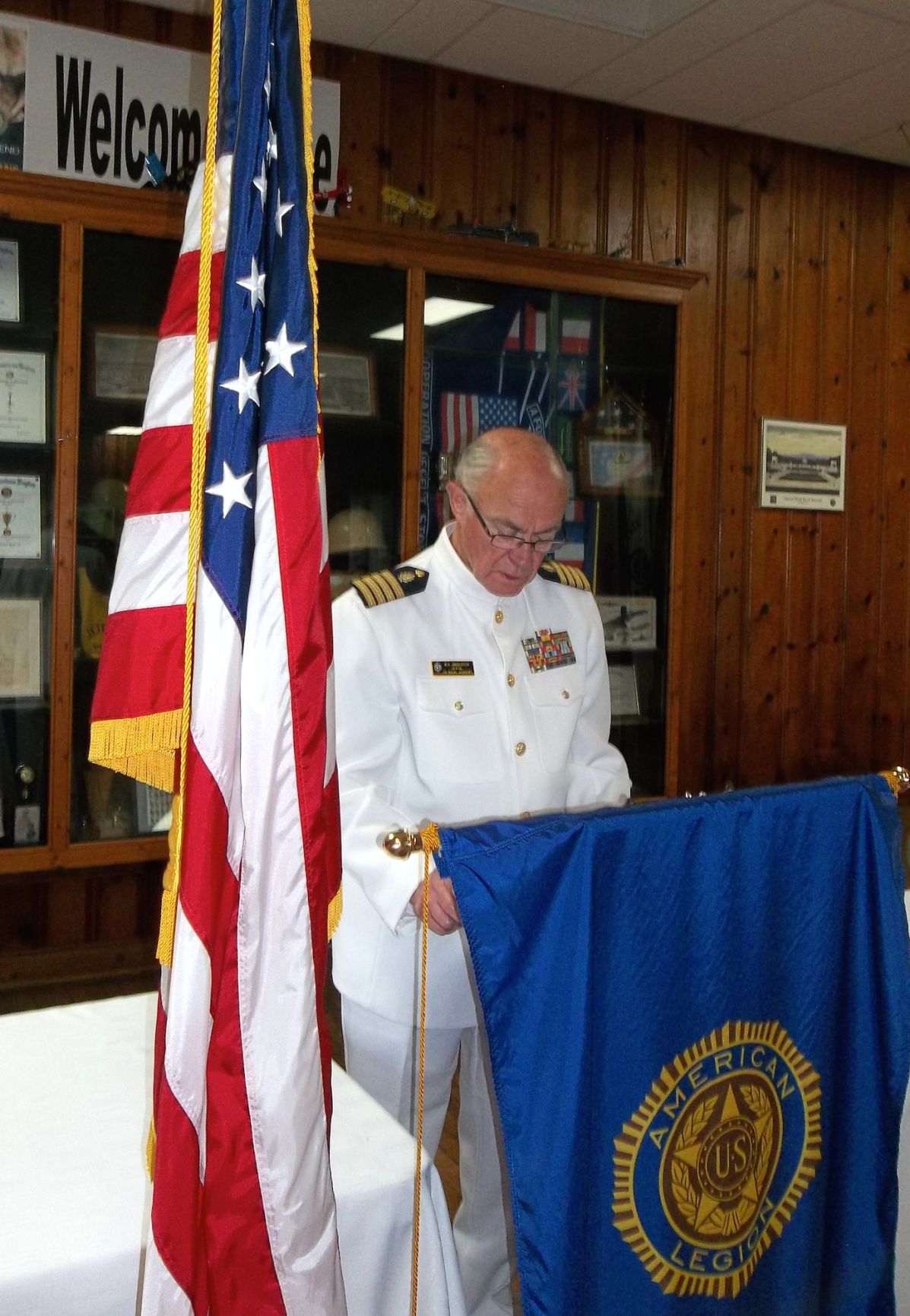 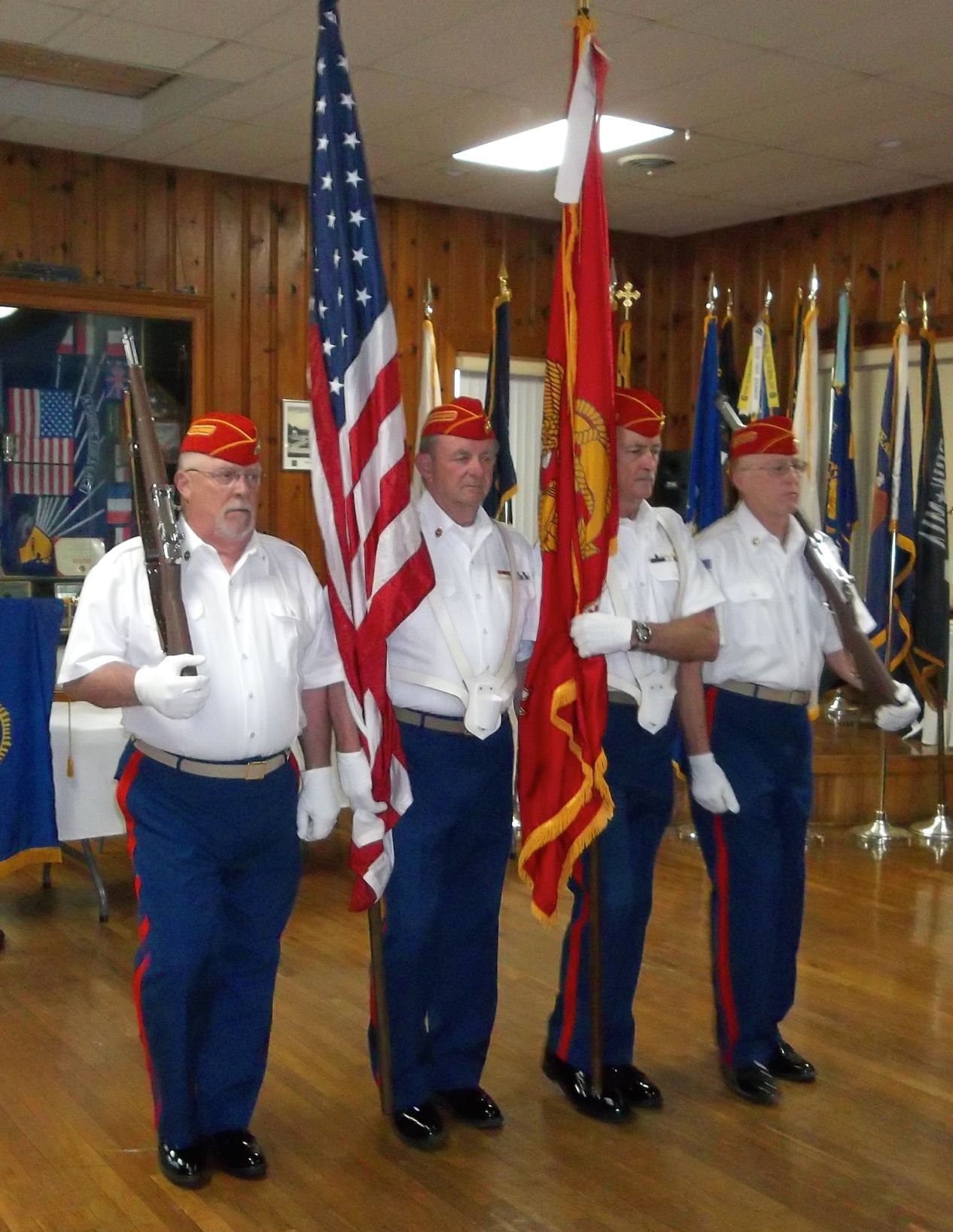 An American Flag flies in front of the tombstone of Jefferson Davis in the Church Hill Cemetery. Davis was the first Queen Anne's county man to be killed in World War I, and the Jeff Davis Legion Post in Centreville is named in his honor.

CENTREVILLE — A military veteran of three tours of duty in Vietnam gave an inspiring talk on Memorial Day as members of Jeff Davis American Legion Post 18 observed the holiday with the public at the Post Home.

Hart Anderson, who is service officer for the Post, was an oral surgeon in the U.S. Navy serving as a captain in a career which included the three tours of duty in Vietnam, was introduced as main speaker by John Perkins, the master of ceremonies, who is 1st vice-commander of the Post.

Anderson especially noted the beginning of our Memorial Day observances, which began back in 1868, and how we render honor to all military dead in our nation’s wars. He declared, “All gave some, and some gave all.”

“Good morning and thank you for joining the American Legion, Jeff Davis, Post 18 for our recognition of Memorial Day, which had its beginnings with the widely documented memorials usually held by the women from local Southern churches during the first week of May, specifically to decorate the graves of fallen civil war dead, soldiers from both the Blue and the Grey,” Anderson said.

“This eventually became Decoration Day in many of the Southern states. Although the name and the date of this memorial gathering has changed several times over the last 150 years, its purpose remains consistent as a formal remembrance, specifically to honor the Service of those men and women who died while in the Armed Forces of the United States.

“In 1868 Gen. John A. Logan, speaking on behalf of a now united North and South, issued a proclamation calling for Decoration Day to be recognized nationwide on the 30th of May, the date chosen from those few days during the month of May that recorded the men and guns of both the Blue and Grey were quiet, the battlefields without combat.

“Selecting a date that recognizes a pause in battle over combat advantage makes his choice, I believe, uniquely American and consistent with our national network of combined and shared personal energy to improve, to fix, to solve and to invent a new way that gives us our strength and power.

“The good old American can-do ability is found in the average U.S. citizen, whose creativity and drive founded this democratic experiment and made possible all the endless accomplishments from the Revolutionary War to walking on the moon and the defeat of Communism, allowing ordinary Americans like you and me to be part of these extraordinary things. Our democratic form of government and the rule of law have granted us freedom to think, worship and act in our own behalf. Personal freedom is the power that unleashes the ordinary person’s creativity and drive.

“We must never forget that this freedom, which has joined us together as a strong nation, is not free. Citizens who populate this democratic form of government require self-discipline, respect for the rights of fellow citizens and education with a minimum of literacy to guide awareness, evaluation and participation in local and national issues. Active citizenship allows us to be effective, prosper and endure.

“While Americans will accept and even encourage change, there is little argument we have been granted the peace to celebrate the victory that has followed resolution of more than one international conflict only by and through the dedication and sacrifice of our military.

“Our sons and now greater numbers of our daughters are willing to voluntarily go in harm’s way to protect and preserve our way of life, whose democratic form of government and the rule of law have granted us freedom to think and act in our own behalf. Never forget that the original sweat, blood and personal resources that launched this government were first invested by the people who put on the uniforms of america’s Armed Forces.

“If our military is given support, the young men and women sent to defend us will keep our country safe and intact but risk is at the tip of the spear wielded by our government in continuing to defend us. In fact, this is done with such grace you might not be fully aware that our United States was and had been under attack for years. It was here, it has happened in America and to Americans as we stood culturally blinded and we still remain almost three decades later, cautious to name its source.

“America and other non-Islamic nations are at risk from activists bound and motivated by a common religious belief that has fielded an army advancing without a national flag, uniform or code of honor we recognize. Its weapon is terror, derived from sudden death and injury to civilians — men, women and children — noncombatants judged guilty and made victims of jihad simply by living outside a commitment to the Qur’an. The goal of this jihadist army reaches from the dominance of cultures that actively oppose Sharia Law to the destruction of nations whose mere existence as infidel, defiles Islam.

“Protecting ourselves from a threat we have trouble defining culturally may be intellectually confusing, emotionally taxing and even physically stressful or disruptive. Our window to this is provided by the 25/7 worldwide media, allowing us to repeatedly witness any conflict of their choosing accompanied by emotional commentary in almost real time. Awash in seemingly endless chaos and suffering we must be careful not to react emotionally because it is our most basic responsibility to ensure the young men and women sent to defend us are given the very best support possible and they will keep our country safe and intact.

“It is difficult not to pause in front of the memorial we have placed at the entrance of this American Legion Post. I find it a very poignant tribute to our fighting man. This statue, ‘The Soldiers Cross,’ is visual poetry and the symbolism of the empty worn boots, the discarded weapon adorned with personal armor, holds a strong and melancholy message: the owner of this indispensable collection of military gear, no longer has a need for them,” he continued.

“This is a visual Memorial Day tribute. The owner of these objects has sacrificed, in fact given all and is worthy of our honor. The base of this memorial carries a message appropriate for Memorial Day: All gave some; Some gave all.

“A powerful and true statement that can be advanced anytime the military is honored, often best done with family picnics, yellow ribbons or quiet prayer.

“There is always a price and there will be loss among those who protect our nation. For our military’s sacrifice, we must as a nation, welcome back those returning and render honor to those who fell. We shall also render honor to those who can never return but ill forever stand watch from military cemeteries worldwide, such as Virginia’s Arlington, Belgium’s Flanders Fields or the scattered graves of the MIA, known only to God.”

Prayer was given by Post Chaplain Joe Potter before 1st Vice-Commander Perkins called on the main speaker. Also speaking to the crowd in the Post Home was Greg Manning, who is Post Adjutant.

Following the program, the Post Auxiliary Unit 18 served a luncheon.