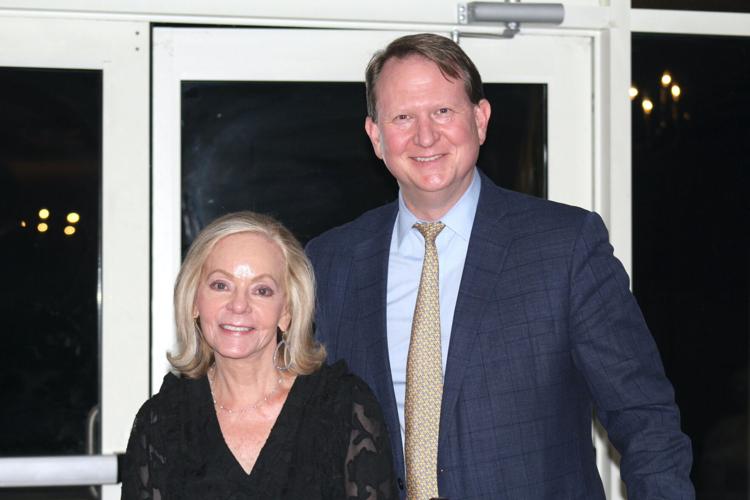 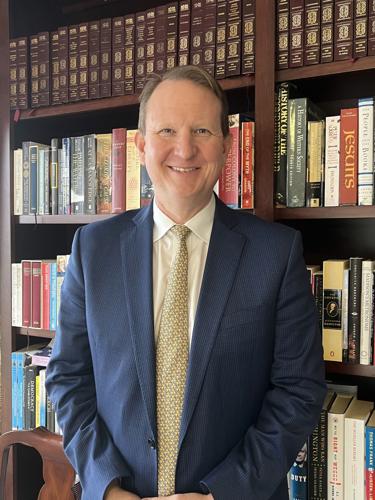 GRASONVILLE — Addressing the Queen Anne’s County League of Women Voters earlier this month, Gunston School Headmaster John Lewis said now is an opportune time to engage the newest generation of voters, statistically one of the most active young participants in democracy since the voting age was reduced to 18 during the Nixon Administration.

“I think we are entering a decade of very high political awareness and engagement,” Lewis said, “where younger voters are going to be looking for trusted outlets of information, support, and fellowship. And the league, I think, could be potentially a space for younger voters in our region.”

Headlining a May 10 dinner at the Prospect Bay Country Club, the league’s first in-person event since the pandemic quarantine in 2020, Lewis spoke of his long-learned love for democracy with the first-hand knowledge that it can crumble when taken for granted.

In what he described as a “Cold War childhood,” Lewis grew up in a moderate Democratic family “that passionately followed the news of the day.” The educator recalled storming into his parents’ bedroom every morning to read the Washington Post, advancing from the comics to the front page in the publication he would later help deliver as a paperboy.

He first became involved in politics at the age of 12, leaning into the 1984 presidential election by stuffing hundreds of Walter Mondale flyers into neighboring mailboxes. “Confident” and excited that America was going to elect its first female vice president, Geraldine Ferraro, Lewis watched shockingly as President Ronald Reagan won his re-election campaign with an astonishing 525 electoral votes. Compared to Mondale’s 13, it was one of the most decisive landslide victories in modern American history.

The last time a presidency was so handily decided was in 1936, when Franklin D. Roosevelt won his second of four terms with 523 electoral votes, approximately 98.5% of the electoral college.

Lewis said that remarkable defeat was a “watershed moment” for him politically, signaling a need to better understand the process. His time at Georgetown University included political science coursework, but his strongest education came internationally, when he took a cue from his grandfather and moved to Ecuador and Singapore.

While in South America, Lewis witnessed the 1996 election of Abdala Bucaram, an Olympian turned politician who described himself on the campaign trail as “El Loco,” or “The Madman.” Lewis recalled witnessing Ecuador’s democracy turn into an autocracy under Bucaram’s rule — a lesson in the “fragility of healthy, democratic systems,” he said. Six months after his election, Bucarum was removed from office by the country’s congressional body and the president sought political asylum in Panama.

Contrarily describing Singapore as one of the “world’s most functional nations,” Lewis experienced a country with severely restricted civil liberties. In the mornings, he would read newspaper articles aloud to his wife so that he could remember what information was censored by the afternoon.

These experiences eventually led Lewis to Gunston, where he insists on teaching government despite his administrative role at the school. He said the mix of responsibilities is important because one of his self-determined roles in life “is to prepare young people not just to be good students, but to be good citizens.”

“My motto as a government teacher is simple,” Lewis said, “I want to teach students how to think, not what to think.”

From there, the head of schools introduced young voters the same way he introduced himself, with important political moments. Whereas his “Cold War childhood” was marked by the AIDS epidemic and the fall of the Berlin Wall, Lewis identified the election of President Barack Obama, the legalization of gay marriage, and the massacre at Sandy Hook Elementary School as key historical moments to defining modern youth.

Speaking days after an early Supreme Court decision was leaked that suggested overturning abortion rights precedent, Lewis said his students were describing the potential reversal of Roe v. Wade as the political “earthquake of earthquakes” — no matter which side of the issue they fell on.

In a similar vein, Lewis drew a connection between young people’s political frustrations or fears and their activism. According to a spring 2021 poll from the Harvard Institute of Politics, while 56% of voters aged 18-29 said they were “hopeful” about the future of America, compared to 31% in 2017, only 7% described the United States as “a healthy democracy.”

Lewis said the latter was a statistic that should “alarm us all,” but noted the impact the last several years of turmoil have had on civic engagement. Between 2009 and 2021, according to Harvard University, the percentage of young voters who considered themselves to be politically active jumped from approximately 24% to 36%. And between the 2016 and 2020 presidential elections, young voters made a similar leap at the polls. According to Tufts University, whereas 39% voted in 2016, an estimated 50% voted in 2020.

“So while young people may be fearful,” Lewis said, “the data does not show young people to be politically apathetic.”

With these facts, Lewis encouraged the League of Women Voters to strike while “the iron is hot” and offered five points of advice for getting young citizens involved with the local elections.

First, he suggested the league take advantage of Maryland’s civic education requirements. According to Education Week magazine, Maryland is one of eight states in the country to require a year-long government course for graduation. Lewis said the league should know all of the region’s government teachers and make themselves available as a resource.

Getting the ball rolling, Lewis pledged to give the league an hour of class time in every Gunston government course to talk with students about what the league does and how they can get involved. His promise was met with applause from the crowd.

Second, Lewis said the league needs to promote its digital footprint. Commending the organization’s recently renovated website and citing Pew Research Center statistics that show only 7% of young voters get their political news from print media, the head of schools said the students the league needs to need to reach are in the virtual space, not print.

Third, Lewis suggested the QA League of Women Voters “lean in” to the group’s national priorities — which include protecting the freedom to vote, reducing money’s political influence, improving elections, and fighting for fair redistricting — because in his mind, they “reflect...the priorities of younger voters.”

Next, he said “if the league wants to engage and educate younger voters, the league needs to educate and engage younger voters.” Looking at the audience mostly made of older citizens and league veterans, Lewis proposed a challenge: for next year’s dinner, he encouraged everyone to sponsor one voter under the age of 30, saying that if a member didn’t know any, he “knows a few.”

The headmaster promised to bring five of his students to the league’s next annual event.

Finally, noting that people’s faith in smaller governments is stronger than at the national level, he said one of the best ways to get young people involved in politics is to connect them with local officials. Pointing out the county politicians at the event, including Orphans’ Court Judge Kimberly Jean Cascia, former Circuit Court Clerk Scott MacGlashan and commissioner candidate Howard Dean, Lewis said his students are always “fascinated” when local government representatives speak to their class.

Lewis was met with fervent conversation following the presentation. MacGlashan commended him for working to keep his own political opinions out of the classroom. And following the event, the league indicated it would take the headmaster’s advice to heart as it plans its 2022 election coverage.

“Dr. Lewis focused us like a laser on today’s young voters — how they get their information and how they differ from earlier generations,” said league board member Mary Campbell. “His insights will inform us as we pursue our mission of informing voters and engaging participation in the democratic process.”