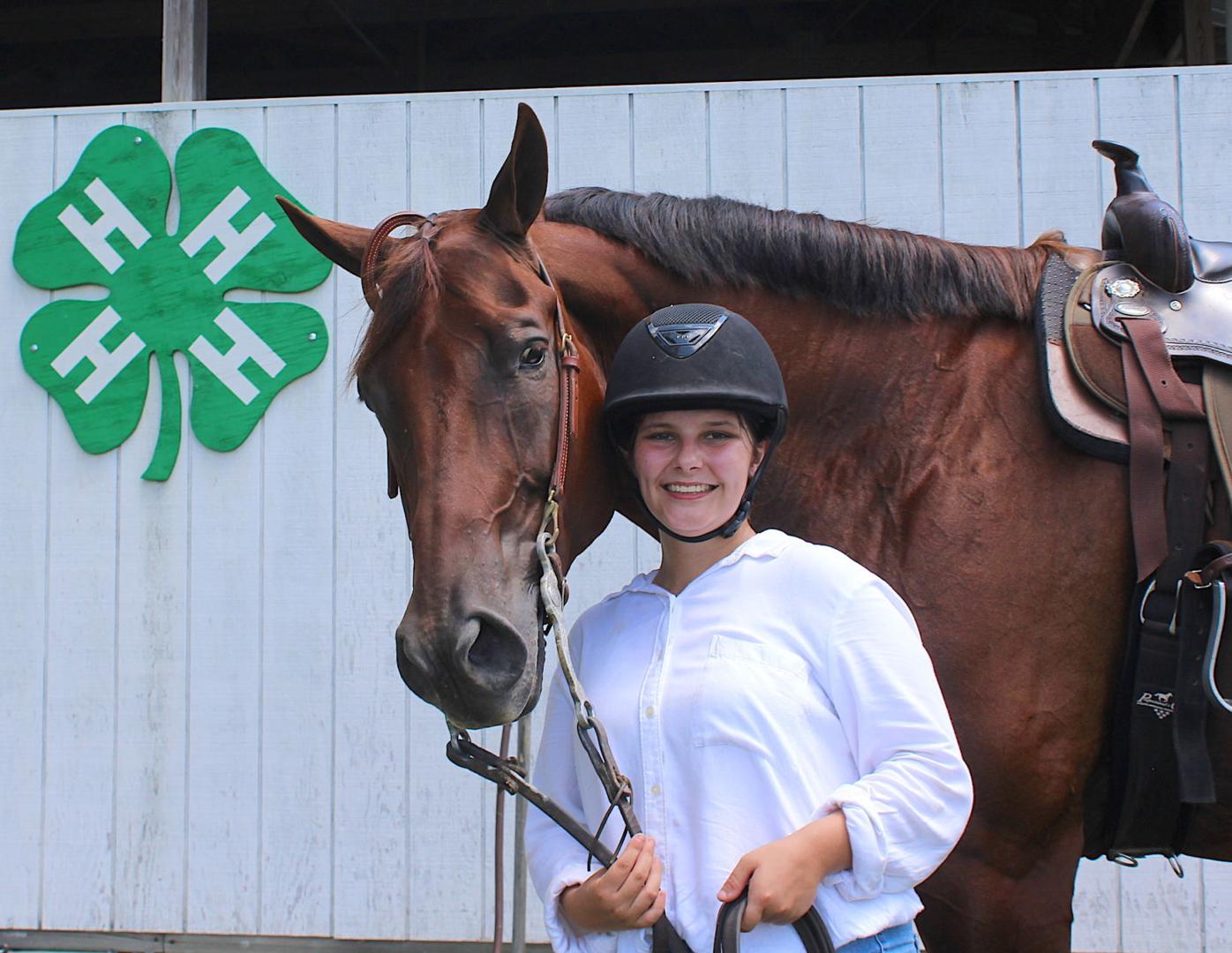 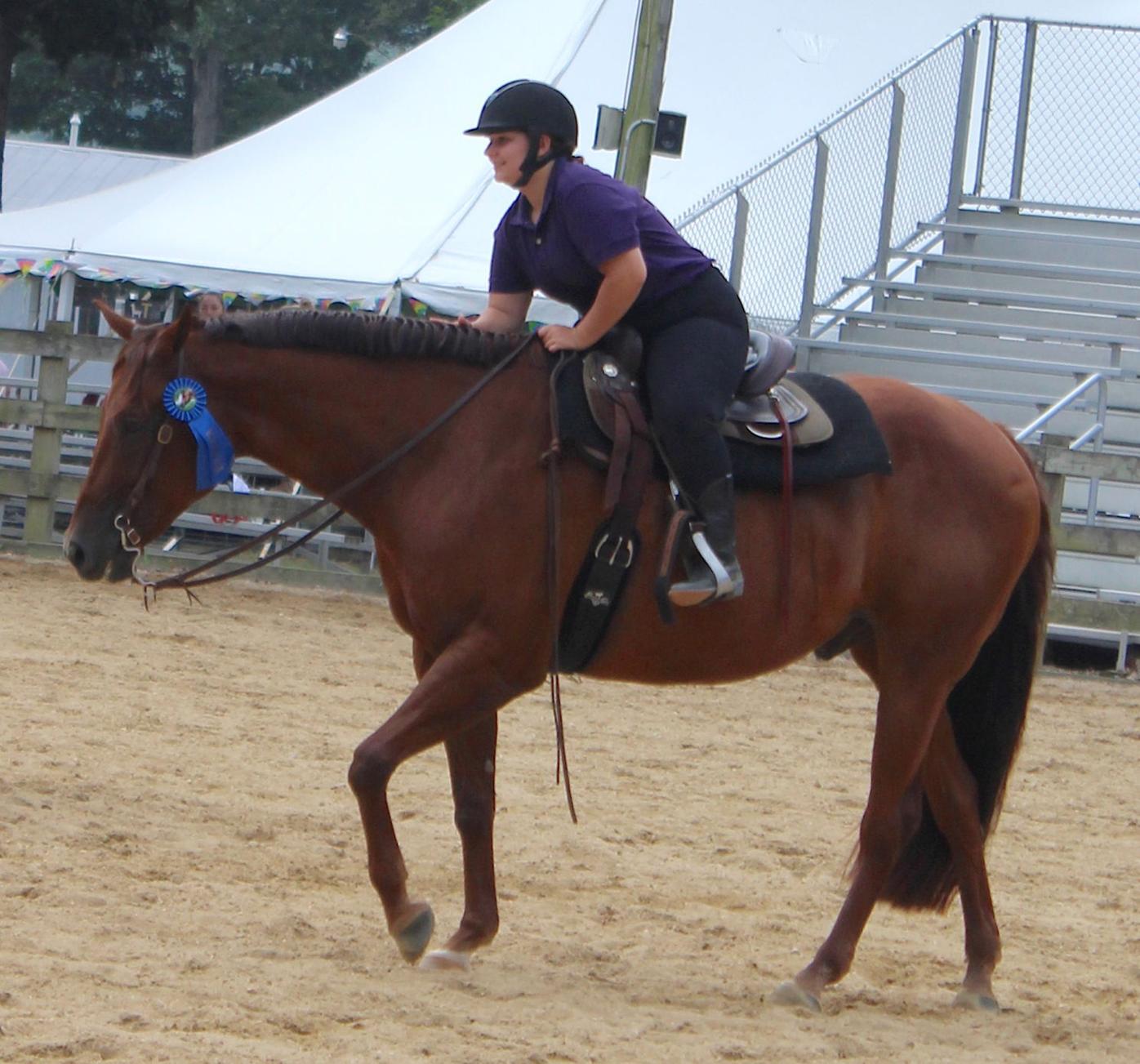 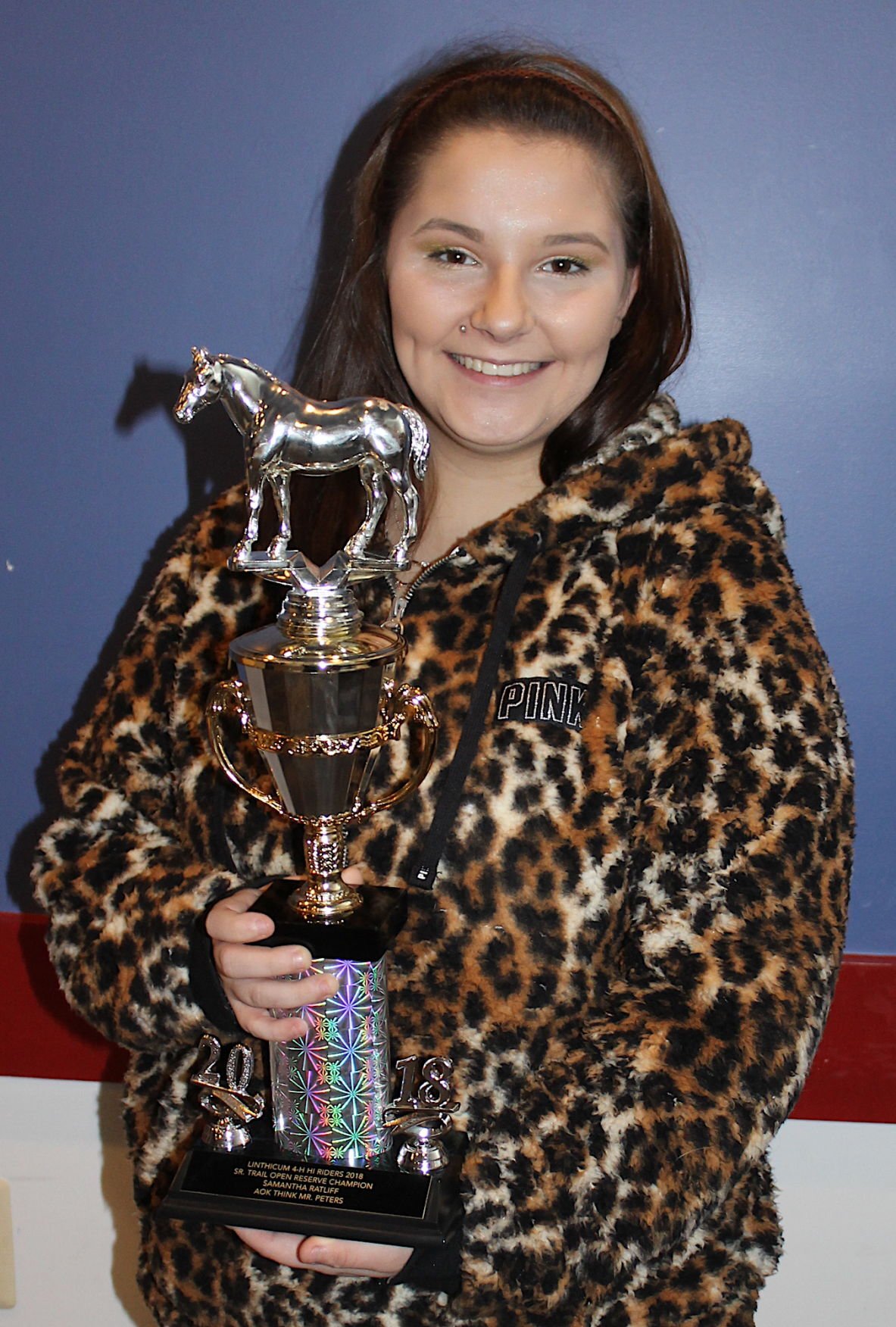 Samantha Ratliff, 17, a senior 4-H member of the Dream Riders 4-H Club, holds the Sr. Trail Open Reserve Champion trophy she earned in the Linthicum 4-H Hi-Riders Horse Show Series for 2018. It was the largest recognition Samantha has earned thus far in her 4-H equestrian experience.

Samantha Ratliff, 17, a senior 4-H member of the Dream Riders 4-H Club, holds the Sr. Trail Open Reserve Champion trophy she earned in the Linthicum 4-H Hi-Riders Horse Show Series for 2018. It was the largest recognition Samantha has earned thus far in her 4-H equestrian experience.

CENTREVILLE — Unlike most 4-H’ers who have shared stories about their graduating from the 4-H equestrian program in Queen Anne’s County, Samantha Ratliff of Centreville didn’t grow-up in the 4-H program. She got a late start in the program, only joining during her sophomore year in high school, at age 16, having to start competing in the Senior 4-H level, where competition can be pretty tough from others with years of experience.

However, Sami (as known by her friends) fell in love with the 4-H program from what she saw in the volunteer 4-H adult leaders and an old horse that craved for attention and love as much as Sami did.

She said, “All of the leaders I’ve met in 4-H have always been upbeat and asking, ‘What can I do to help you?’ That’s been their attitude toward me. That means a lot personally.”

Also, the first horse she was paired with, an older Palomino Quarter horse gelding named “Boone” touched her heart one day, and it was all-love between the two after that.

She said, “I had been working with him for several months. He didn’t seem to know much, and neither did I, but we learned to get to know each other. One day I arrived at the farm where he stayed, and when he saw me coming to the gate to get him out of the field, he was flying toward me before I had the gate open. He snickered to let me know he knew who I was. That moment touched my heart. He was the first horse I ever showed at the county fair, and he and I did really well at other shows we went to.”

Sami needed to be in a positive program, and that’s what she said she found in 4-H. She had not had good experiences in school.

“I was in the alternative high school, Anchor Point Academy, as it was called then, for almost my entire four years,” she said. “If it hadn’t been for the principal, Mr. Kevin Kintop, and the teachers at the school, I don’t think I would have graduated high school.”

During her high school years, Sami had been diagnosed with ADHD. She had real trouble controlling her temper.

“Doctors really didn’t know how to treat me,” she said. “They prescribed all kinds of medications for me that never seemed to work. The medications just seemed to make things worse, and I didn’t like the medications.

“Riding and working with the horses helped me more than anything. They (the horses) taught me to be patient, to keep trying until the horse and I got it right. And that didn’t happen all at once. We just kept working at whatever we were doing.”

Sami joined the Dream Riders 4-H Club, one of four equestrian clubs in the county. Karen Marx was her 4-H leader and trainer with the horses. Said Marx, “When Sami first walked into our barn, she was an angry individual and ready to fight anyone. Over time, that changed as she learned about horses, and how to become an accomplished rider.”

Sami described herself as having a “behavioral issue problem .... At times I was depressed. I didn’t even want to get out of bed, but the horses gave me a reason to get up and go work with them. The experience with the horses, I believe, saved my life — definitely!”

Sami’s mom Cindy List said, “4-H taught Sami never to give up on things. Matched up with the right horse and right people taught her life skills and helped her to keep her focus. All of that has applied to furthering her education at Chesapeake College and other things in her life. I can’t thank the people who have worked with Sami enough.”

List watched Sami ride in the QA Youth Western Horse Show, Wednesday, Aug. 12, at the 4-H Park in Centreville. Since Sami is turning 19, she is aging out, graduating from 4-H as a Youth, and this was her last show at the fairgrounds. Sami set a goal of wanting to repeat winning the Senior Youth Western Pleasure class with the same horse she rode last year, and she did so — earning three blue ribbons total and finishing with three second place ribbons in other classes during the show — a great overall last performance at the show, earning Senior Western Reserve High Point Champion.

Her mom said, “My favorite part of watching the show was when Sami rode in poles and barrels. Her horse, ‘Petey’ is a pleasure riding horse, not a speed horse. It was really funny watching her and Petey do those classes!”

Sami is working toward earning an Associate’s Degree in Biological Science at Chesapeake College, and she’s been doing well. She graduated from Queen Anne’s County High School in 2019. After Chesapeake, she plans to pursue studies in Equine Science and hopes to practice in some field of equine medicine.

“If I hadn’t joined 4-H, I can’t imagine how my life would have turned out,” Sami said.