Billy Schindler and teacher Paul Taylor outside the Maryland State House where Billy was recognized as the District 2 winner of the 2016 “If I Were Mayor” essay contest. 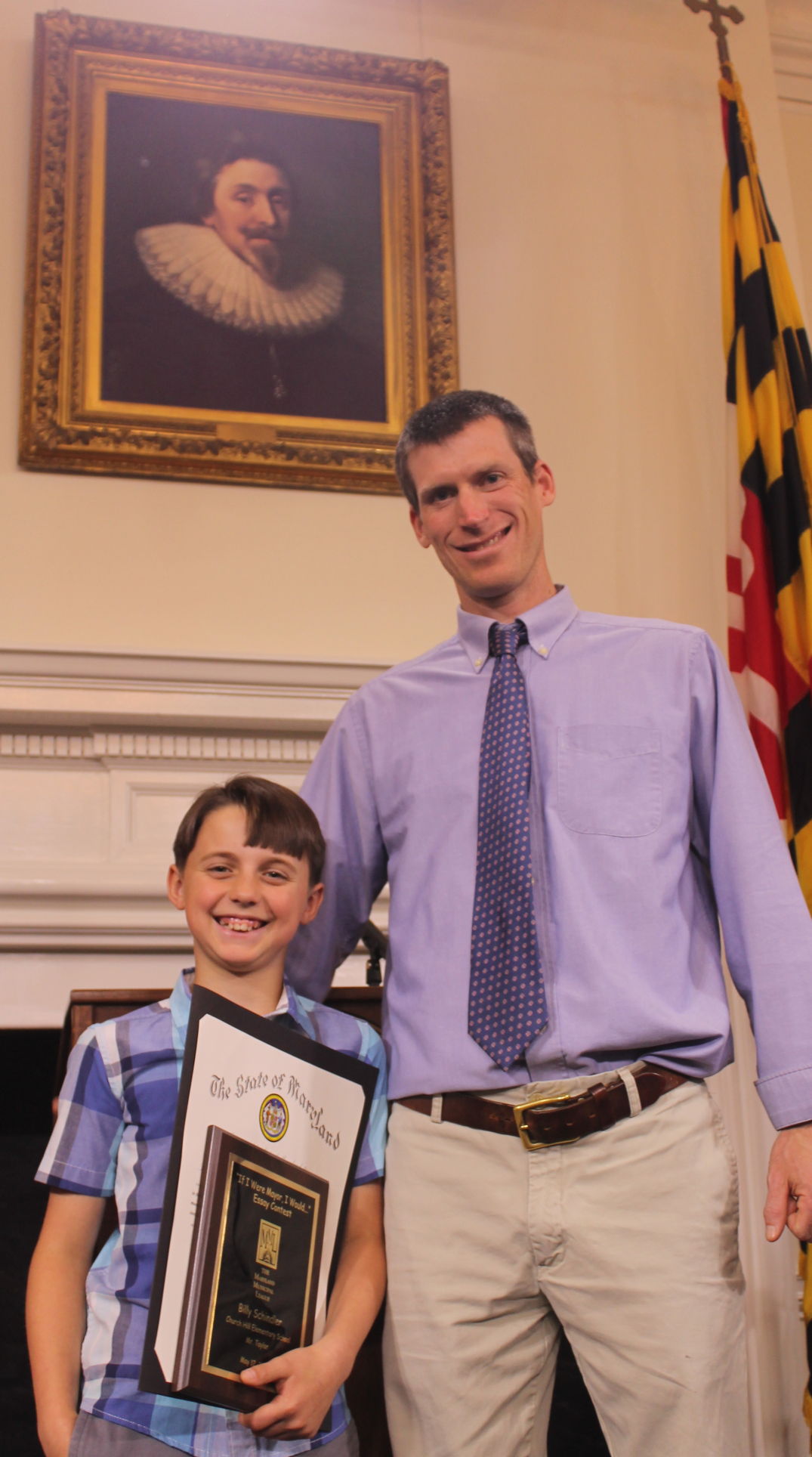 Church Hill Elementary School fourth-grader Billy Schindler and teacher Paul Taylor stand beneath a portrait of Lord Baltimore at the State House where Billy was recognized for his “If I Were Mayor” essay. 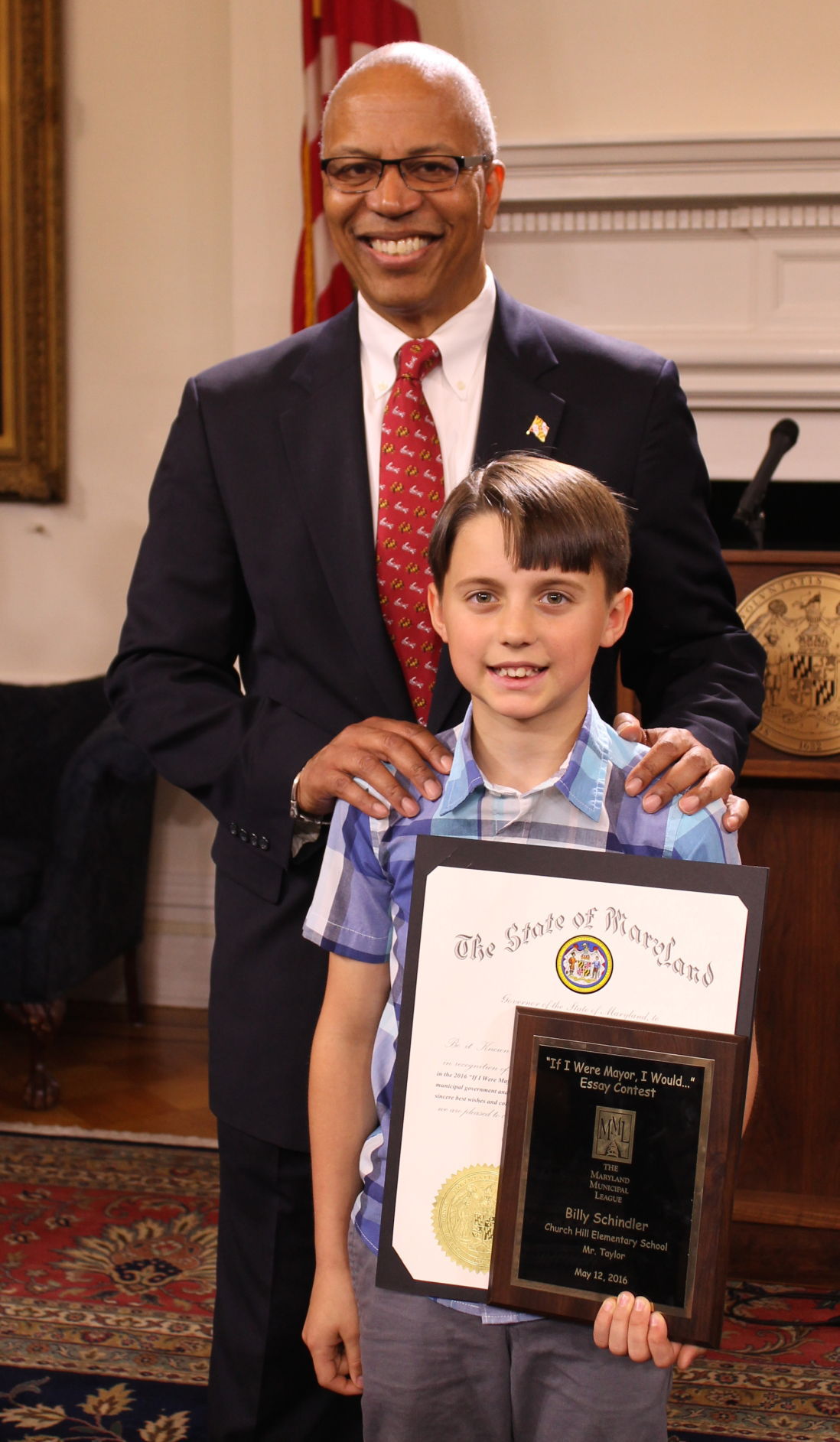 Billy Schindler, a fourth grader at Church Hill Elementary School, is congratulated by Lt. Gov. Boyd Rutherford at the State House for his winning “If I Were Mayor” essay.

Billy Schindler and teacher Paul Taylor outside the Maryland State House where Billy was recognized as the District 2 winner of the 2016 “If I Were Mayor” essay contest.

Church Hill Elementary School fourth-grader Billy Schindler and teacher Paul Taylor stand beneath a portrait of Lord Baltimore at the State House where Billy was recognized for his “If I Were Mayor” essay.

Billy Schindler, a fourth grader at Church Hill Elementary School, is congratulated by Lt. Gov. Boyd Rutherford at the State House for his winning “If I Were Mayor” essay.

ANNAPOLIS — “If I Were Mayor I would make my town a safer, healthier, and a better place to live in.”

That’s the opening line in the essay that 10-year-old Billy Schindler of Church Hill wrote that led to him being selected as a district winner in the annual Mayor’s Essay Contest sponsored by the Maryland Municipal League and the Maryland Mayors’ Association.

The contest is open to fourth-graders across the state and is designed to “give students a chance to creatively use grade-specific language arts skills and civics/social studies knowledge,” according to MML. This year, it said, there were nearly 3,000 essays submitted from eleven districts across the state and one winner and four semi-finalists were selected from each district.

On May 11 the winners, teachers and parents went to the State House in Annapolis where they were recognized by Lt. Gov. Boyd Rutherford, officials of the two sponsoring organizations, and the interim state superintendent of schools. Each received a plaque and a governor’s citation, $100 in cash, and a cruise of Annapolis harbor on the Harbor Queen.

“I was super excited,” Billy said in an interview. “I went to the governor’s meeting room and met all the other district winners.”

He said his favorite subjects in school are math, science, and reading. He and the rest of the Church Hill fourth grade have been studying local government and had a visit from Church Hill Town Commissioner Ed Raffetto earlier this year, and went to the town hall on a field trip to see the seat of town government.

When he’s not studying, Billy said he enjoys hunting, fishing, and basketball.

“This was a great honor,” said teacher Paul Taylor. “He did a great job on the project and I’m very happy. All of the kids had great ideas.” He said he was especially impressed with how detailed Billy’s essay was.

In it, he said that if he were mayor, he would put a community garden in the empty lot by the park “so that each family can have a garden bed to plant fruits and vegetables.” Then, he would create a Church Hill Saturday farmers market where town residents could sell what they grew in their garden. “That would make my town a healthier place,” he wrote.

He also would put a bike lane on the road so students can ride their bikes to school, which would make for a safer town. His essay also suggests converting the now vacant bank building on Main Street into a diner so local folks would have a nearby place to go out to dinner or “grab a healthy bite to eat when you are traveling.”

Billy also said that if he were mayor he would have a day once a month to see which family can pick up the most trash in town, and the family that does so would receive a $50 gift card to the local diner, which, he said, makes for a cleaner town.

“To pay for all the expenses, I would have a color run to raise money,” he said in the essay. Color runs are described on Wikipedia as an event designed to promote health and happiness. “Also, since Church Hill has one of the lowest taxes in Maryland, then I would raise taxes two dollars.”

Billy’s parents, Christina and Bill Schindler, said they are very proud of their son.

“What impresses us most is that the ideas he developed really address true needs in our community, and he was able to capitalize on creating resources out of abandoned areas in Church Hill,” Christina Schindler said. “We never realized how much our bike rides to the park impacted his view of our community.”

Even though Church Hill has commissioners rather than a mayor, did he think he’d like to be a commissioner or a mayor someday.

“Maybe,” he said with a chuckle.