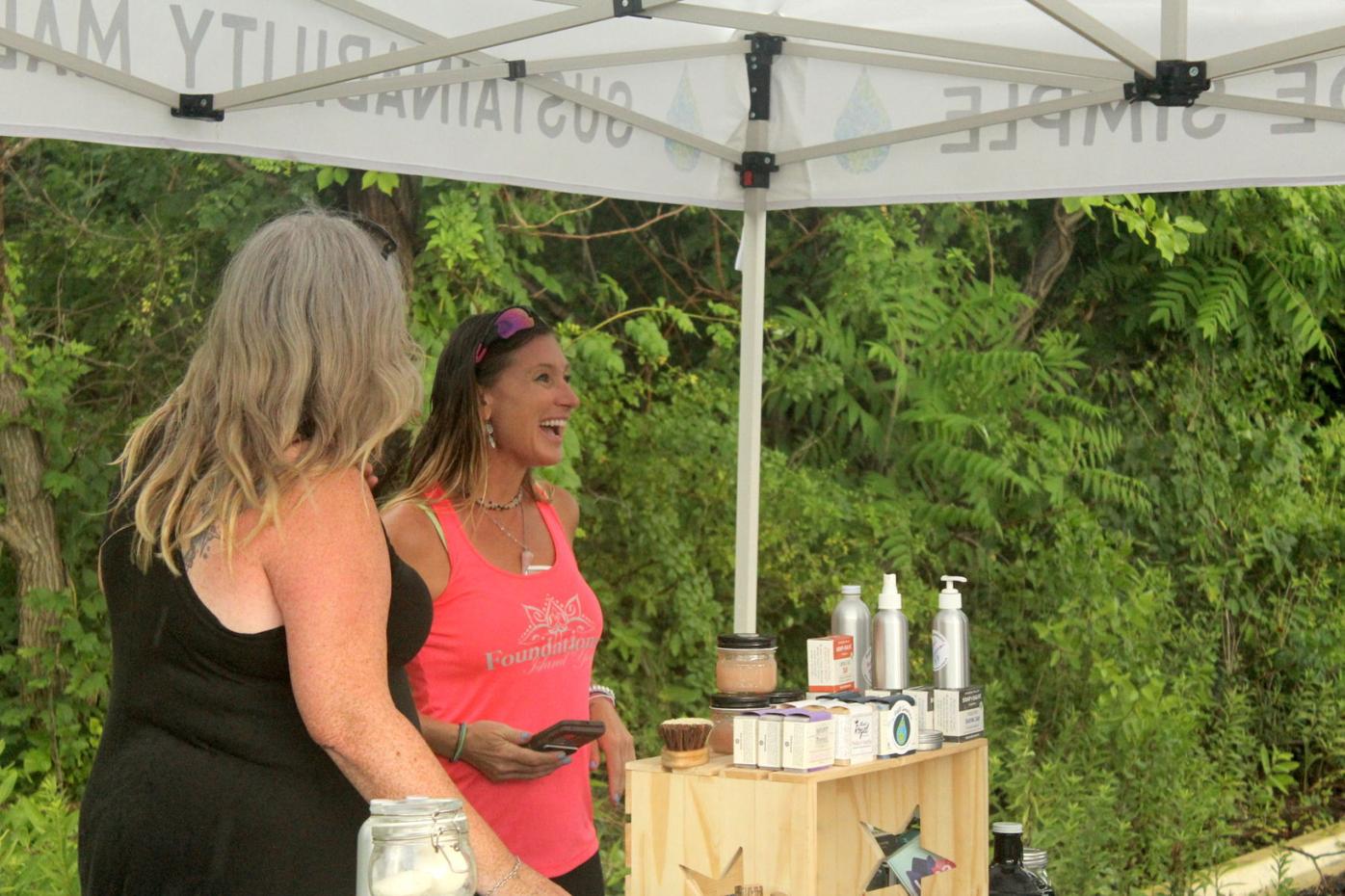 All smiles, Carol Ibex takes cover from the rain underneath the Refill Goodness tent at the end of her fitness festival Friday evening. 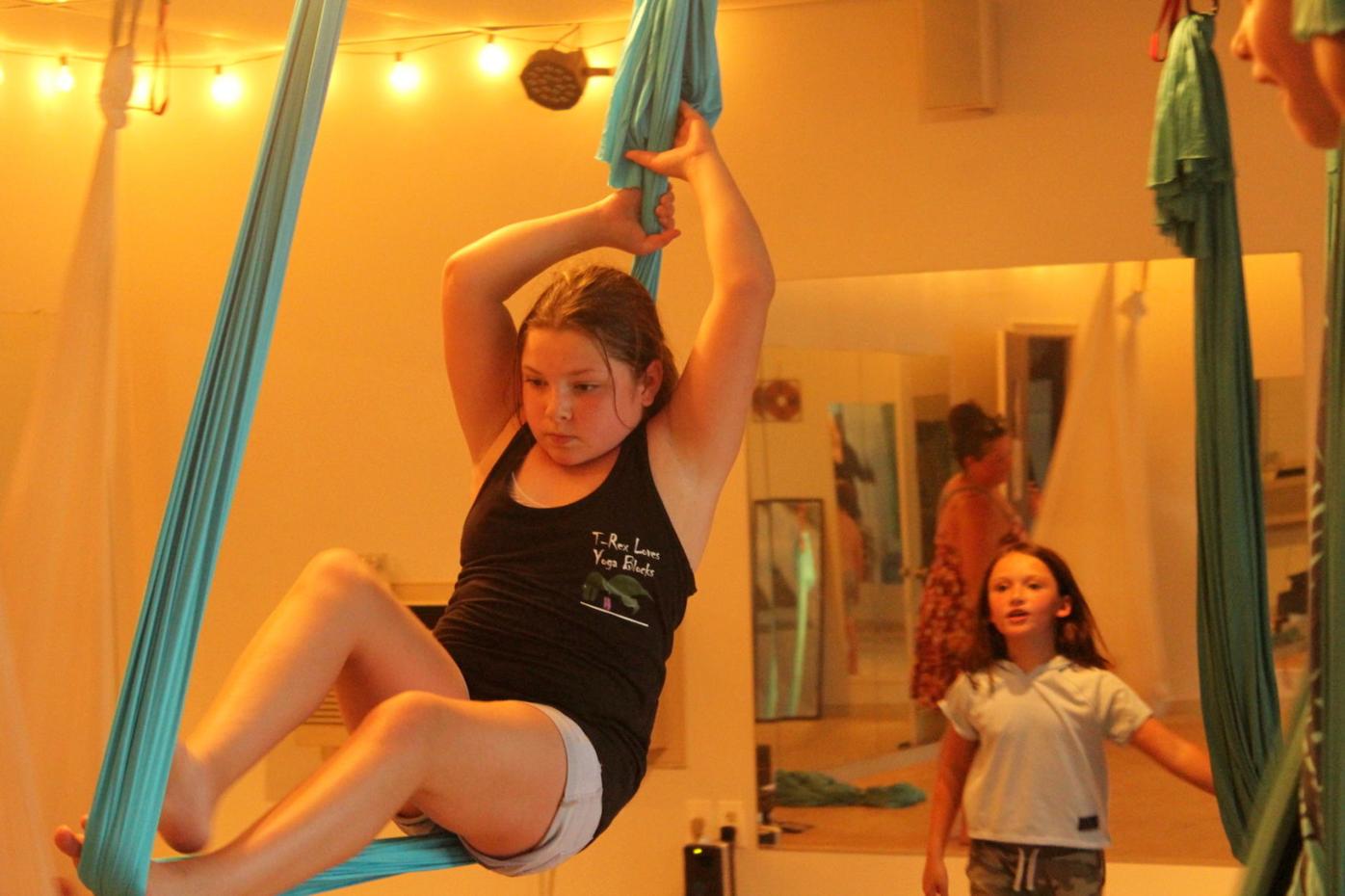 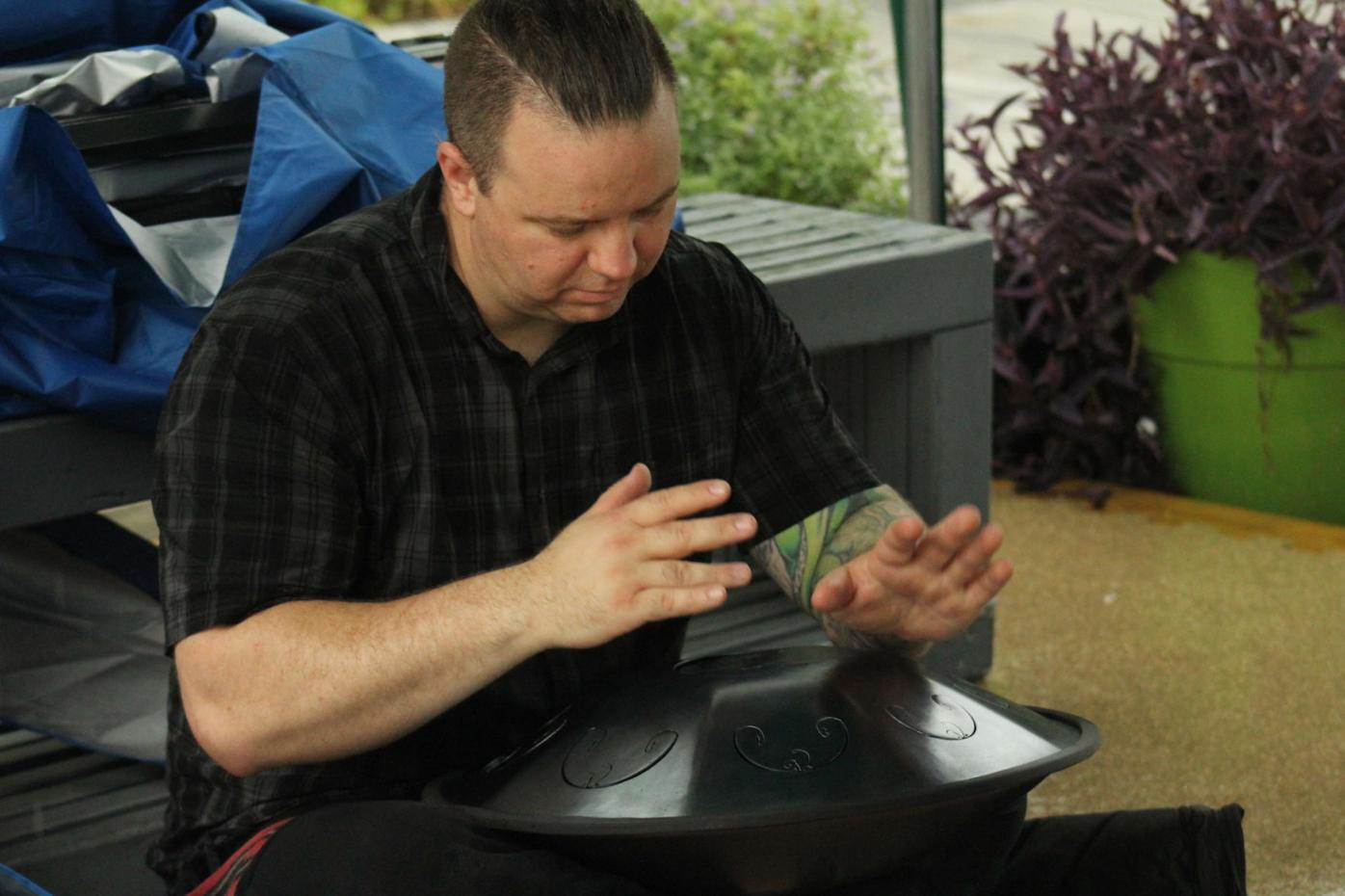 Mike Feifer, hired to photograph the fitness event, takes the opportunity during the rain to play his Russian handpan. 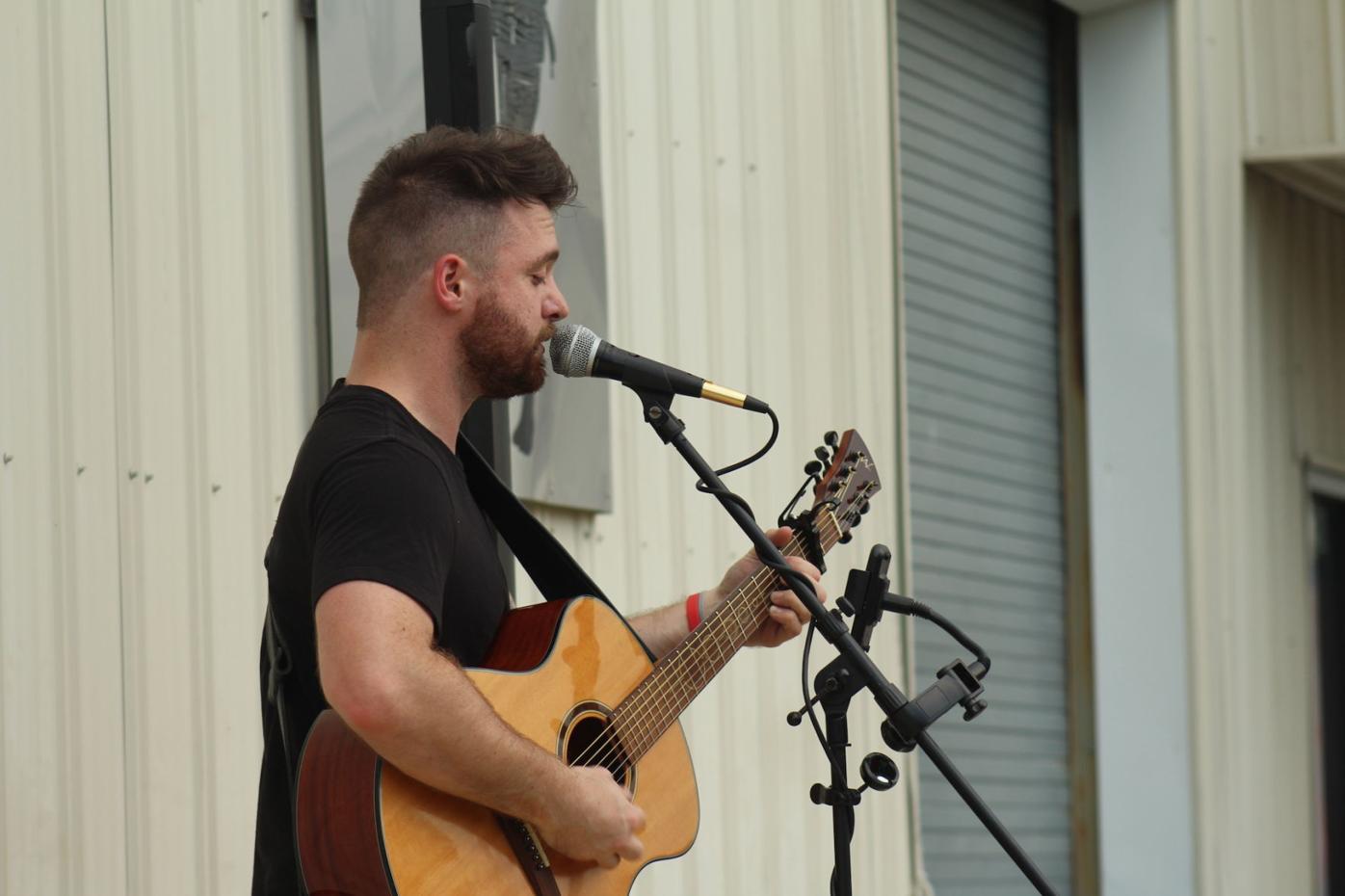 All smiles, Carol Ibex takes cover from the rain underneath the Refill Goodness tent at the end of her fitness festival Friday evening.

Mike Feifer, hired to photograph the fitness event, takes the opportunity during the rain to play his Russian handpan.

STEVENSVILLE — For a few fast-paced hours Friday afternoon, Carol Ibex dashed around the lot in front of her Stevensville yoga studio, Foundations Island Yoga, phone in hand and under a steady blanket of deep, dark clouds.

The paved space between her studio and the Kent Island Martial Arts Center had been converted throughout the day into a local vendor extravaganza, complete with massage tables, craft beer, and inflatable bounce houses. On top of hosting and streaming the event, a fitness-focused festival designed to snuff any inactive habits from the quarantine, Ibex had the added responsibility of watching over her energetic business partner, her nine-year-old son.

“Stop doing little boy things,” she yelled out at one point, as her little boy was busy smashing a water bottle with a rock. “Because I love you!”

Ibex, a “full-time single mom,” has owned and operated Foundations Island Yoga with her son since 2017, proudly making him a 4-year-old business owner.

“It’s just me and my kid,” Ibex said. “And I figured that was the only way to do it, to get him involved.”

Her son’s involvement is entirely on the record. Whatever responsibilities or tasks he is in charge of are documented, as is his informal wage: Robux, the virtual currency for the online computer game, Roblox.

The light-hearted business owner has a long history with fitness on Kent Island. Starting out as a teenage gym rat “for all the wrong reasons,” Ibex was a self-described “adrenaline junkie.” Beyond the gym, her interests landed her on ramps as a skateboarder and snowboarder, and even rockier terrains as a mountain biker.

They also landed her 26 broken bones and 11 concussions.

Her battered body was quickly becoming unresponsive. Her shoulders tensed and locked up near her ears, and she couldn’t manage to wipe away any of the soreness shooting from her joints and muscles. That was around the first time a concerned friend suggested she try yoga.

“I was like, there is no way. Yoga is not what cool people do,” Ibex said with a retrospective laugh.

But when doctors asked asked her to bend down and grab a towel wrapped around her feet, and she couldn’t do it, Ibex had a change of heart. She headed straight into a hot yoga session – a vigorous form of yoga where the room is over 100 degrees Fahrenheit – and immediately felt a change.

“I immediately felt better from pain from car accidents and injuries that doctors couldn’t explain. It was like, ‘oh my gosh, this is what it feels like to feel good!’”

These physical revelations encouraged Ibex to continue on with her wild adventures, which then meant moving out to Colorado to pursue and develop her snowboarding skills. Even the news from doctors that she had gotten Lyme disease was not enough to stop her.

That being said, even if the news wasn’t enough, the illness itself certainly was. When she moved to Colorado and left the disease unattended, it had made its way to her brain, causing Ibex to nearly lose use of her hands.

She soon returned to the Eastern Shore, her bartending job at Red Eyes Dock Bar in Grasonville and, of course, hot yoga, where she once again found strength and healing in the sweltering environment. Her dependence quickly became a financial burden, however, and Ibex soon made the decision to open her own studio. Thanks to a $25,000, contract-free loan from one of her bar’s customers – a leap of faith she attributes to saving her life – Ibex could make that dream come true.

Now with Foundations Island Yoga, she’s able to ignite the same kinds of restorative experiences in others that she’s experienced for herself. And it is with that idea in mind that she designed the post-COVID Fitness Festival.

“I knew people were struggling,” Ibex said. “They were like, ‘it was COVID and now it’s summer. So I took all my COVID bad habits and just rolled them right into summer, and I can’t seem to get back into the groove of things.’”

Ibex, who offered free classes during the pandemic and even provided her students with free mats to practice from home, was also struggling. The fitness festival would be a mutually beneficial endeavor, reconnecting Kent Island’s residents with public space exercise and also generating direct profit for the studio. Though Ibex did not charge admission to the event, or even admission for the participating venders, many of the highlighted businesses donated prizes to the festival’s raffle.

Among the exercise and zen-based venders present were Soul Spark Clothing, Fitness RX, Intentional Creations, Ketones with Aimee, and Oils with Lindsey. Demonstrations, including a Brazilian jiu-jitsu class, were also held by the Kent Island Martial Arts Center.

Unfortunately for everybody, and especially Ibex, the clouds did not hold up. Rainfall began about halfway through the festival, sending most venders packing, and did not stop, forcing Ibex to cancel her event early.

But as tents were taken down, clothes folded, and tablecloths ripped away, the party never stopped. Kids and parents had taken shelter inside the studio, where one instructor and a couple of particularly experienced children helped teach each other the basics of aerial yoga, a hybrid form of yoga that combines poses with pilates and dance using a hammock.

And outside, two remaining tents – the apple ale-serving Cult Classic Brewery and reusable supply shop Refill Goodness – housed many of Ibex’s regulars, who hardly saw the rain as a barrier between them and conversation.

Mike Feifer, an employee with Paul Reed Smith Guitars who’d been hired to photograph the festival, ditched his camera in place of his Russian handpan. And of course, Foundations Island Yoga’s youngest owner had no problems running through the puddles.

“It’s kind of magic in a way, isn’t it,” Ibex asked, with an unbreakable smile.