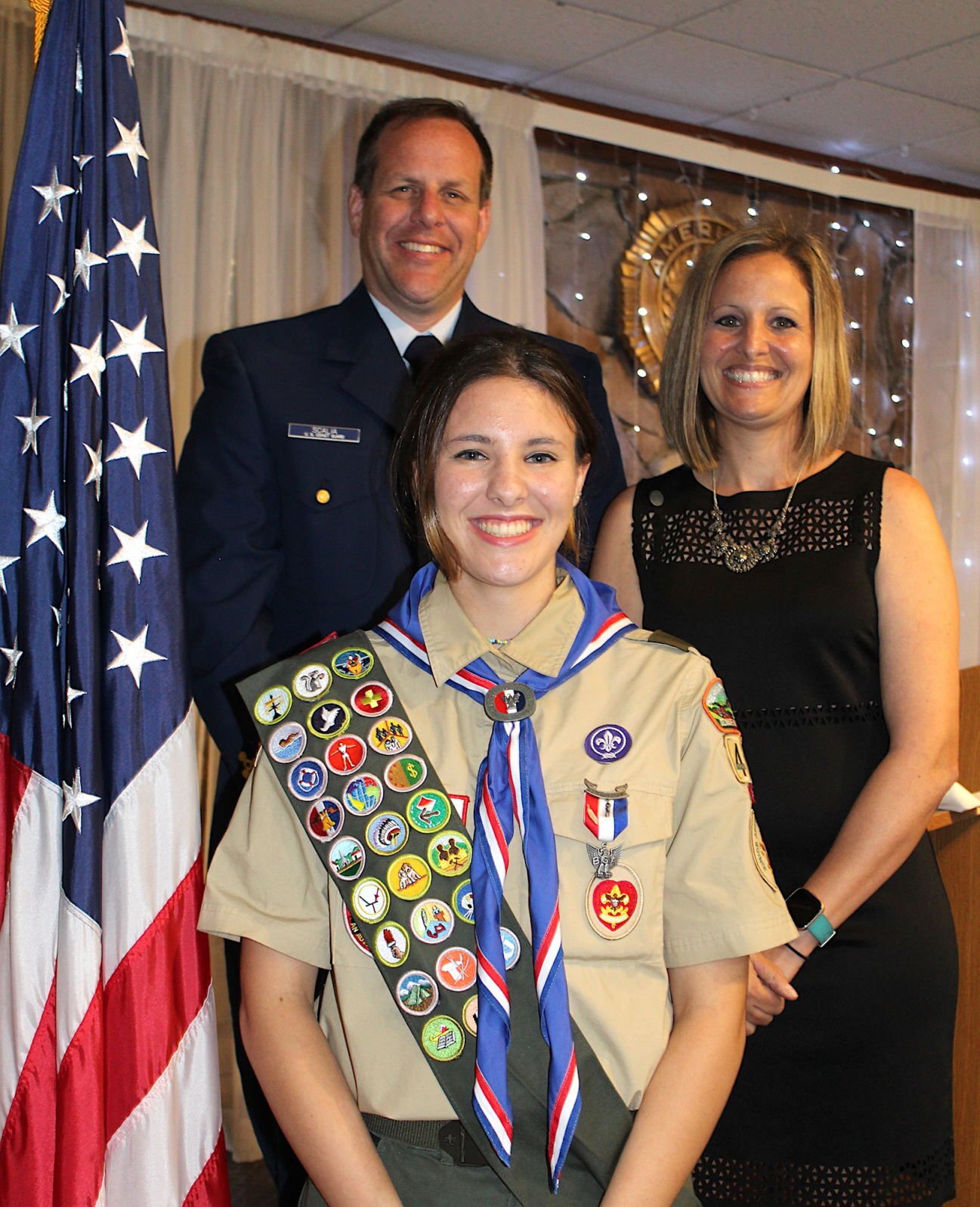 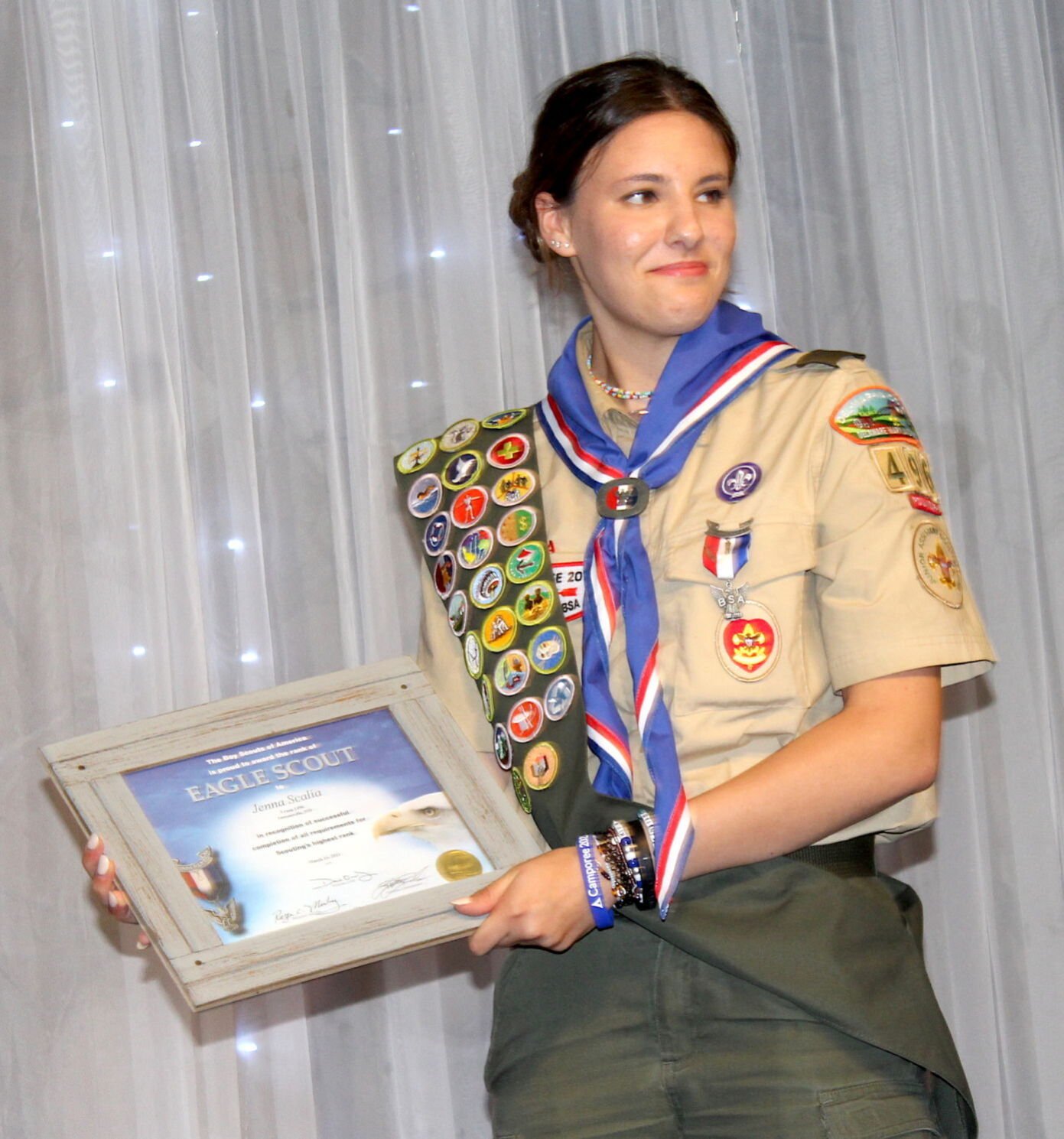 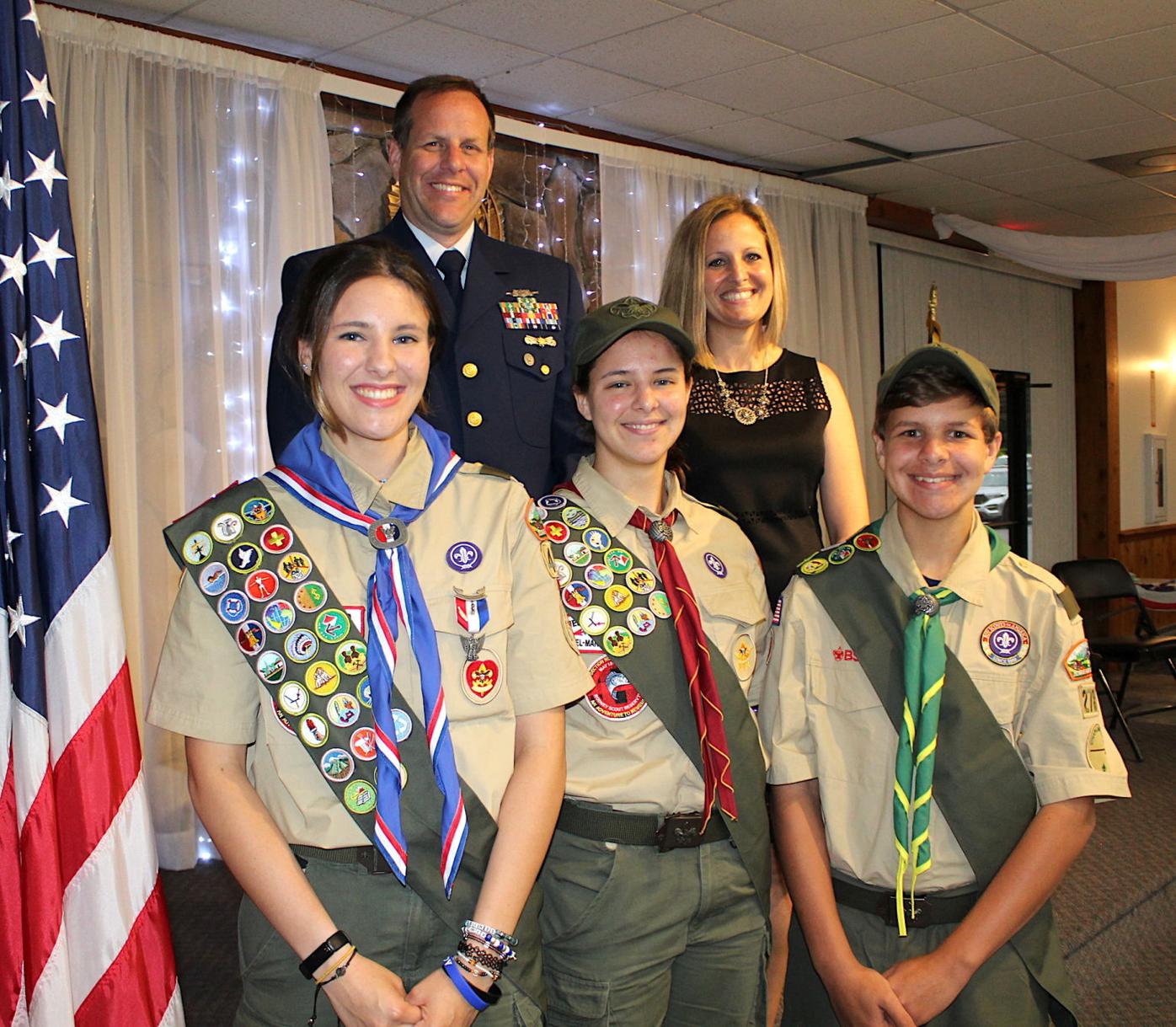 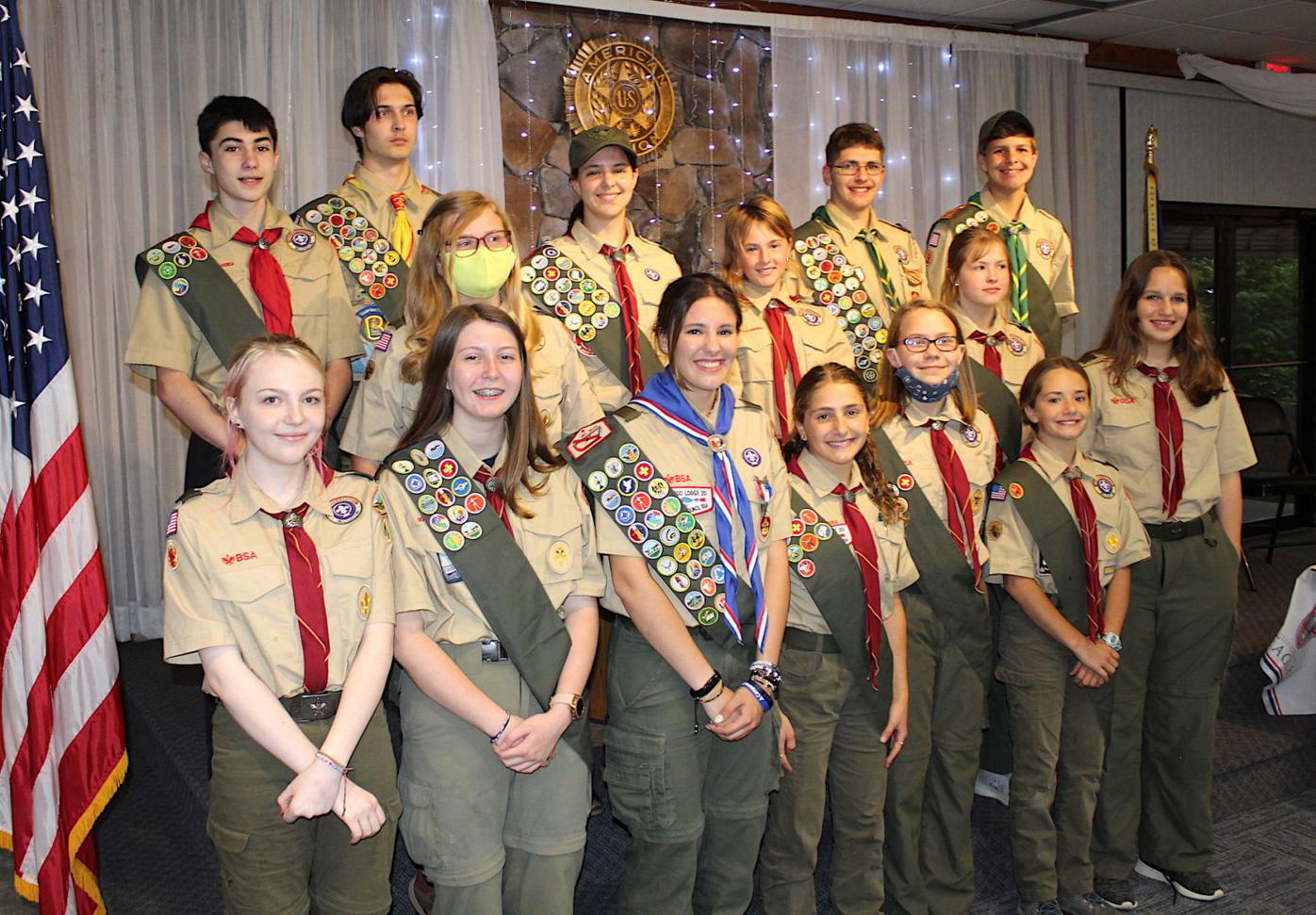 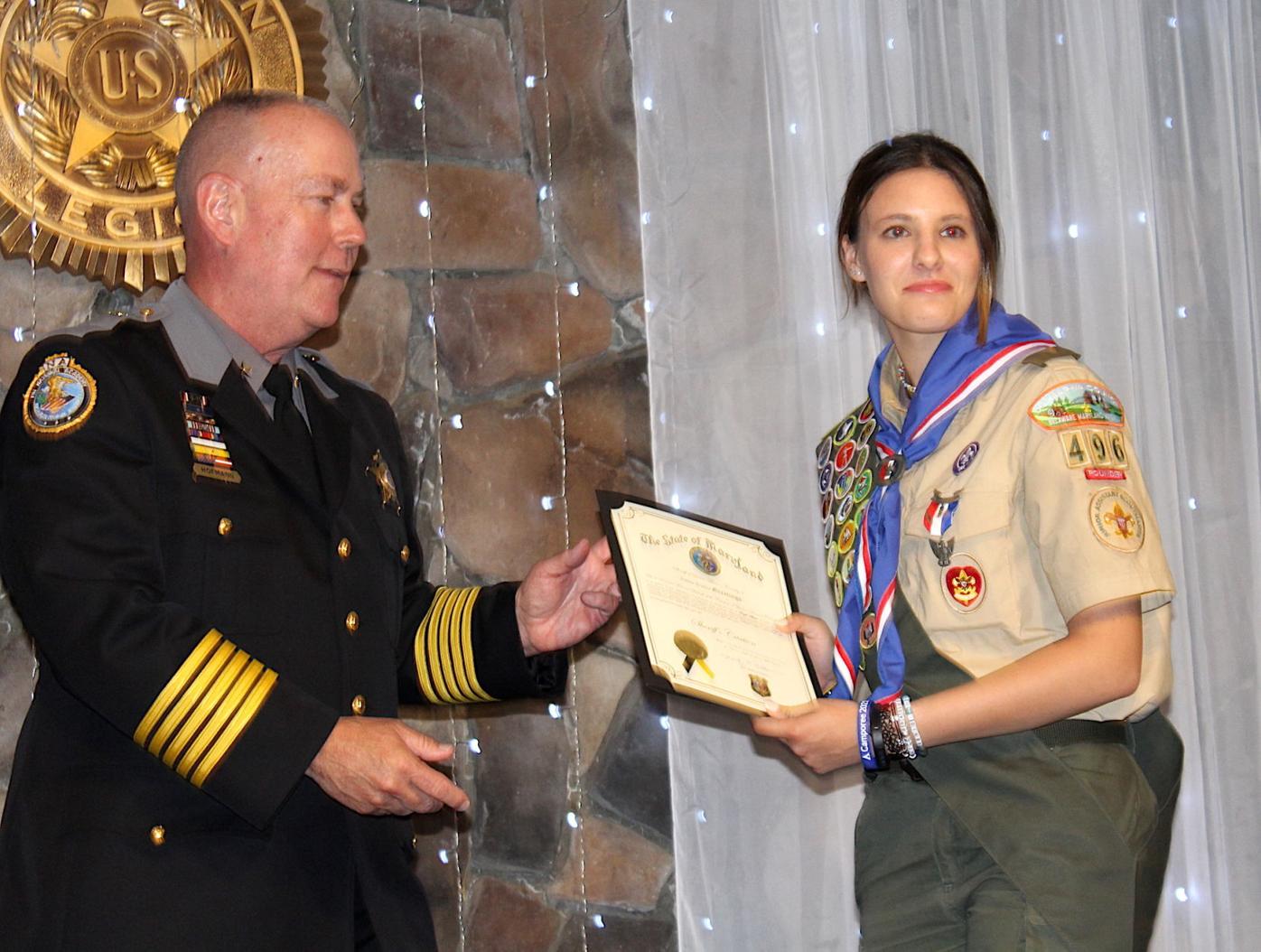 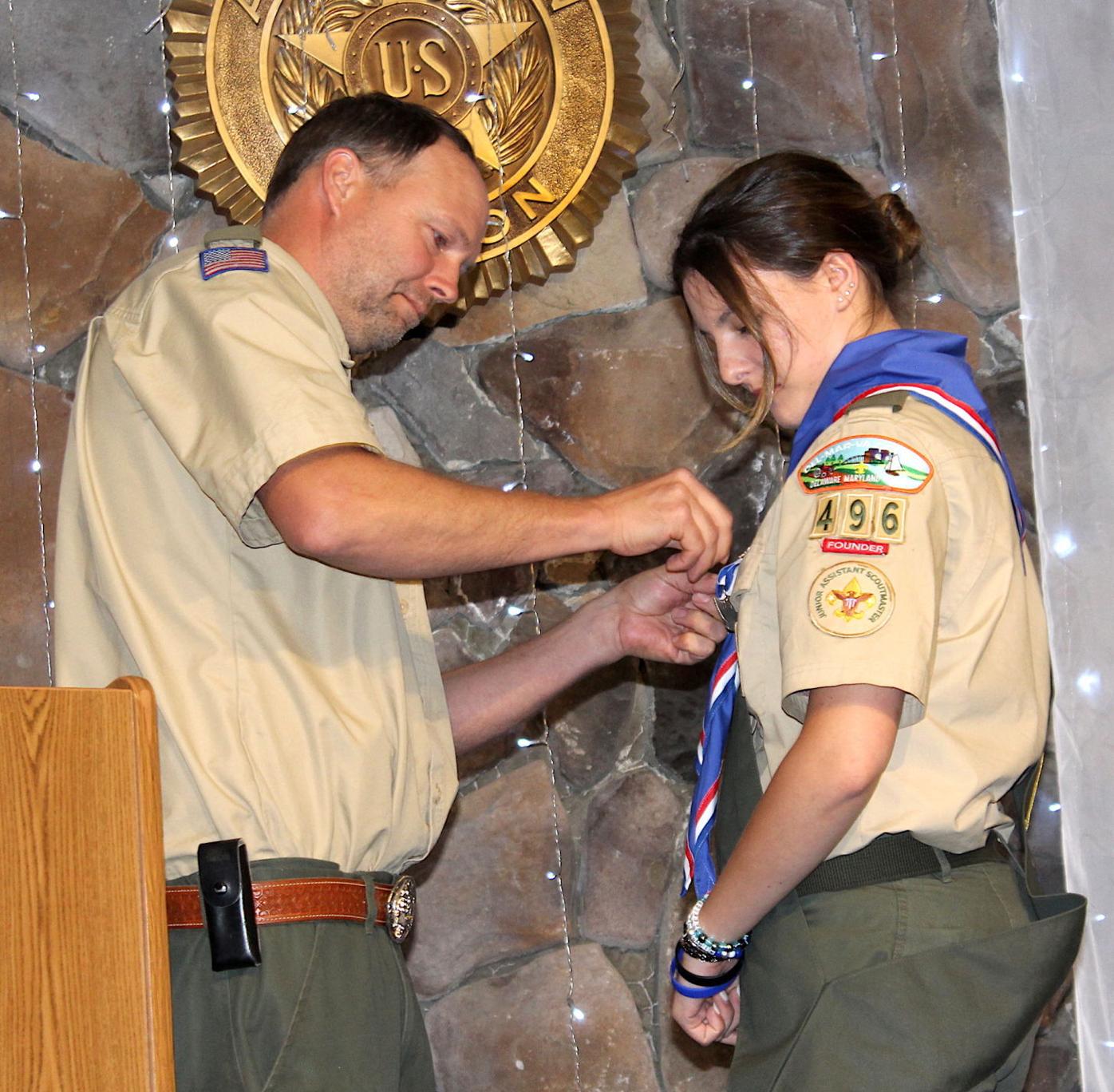 BSA Troop 496 Assistant Scoutmaster Michael Mitchell pins on an Eagle Scout recognition on Jenna Scalia, during her Eagle Court of Honor, Thursday evening, June 3. The Court of Honor took place at the Kent Island American Legion, Post 278, in Stevensville. Mitchell served as Master of Ceremonies for the program. 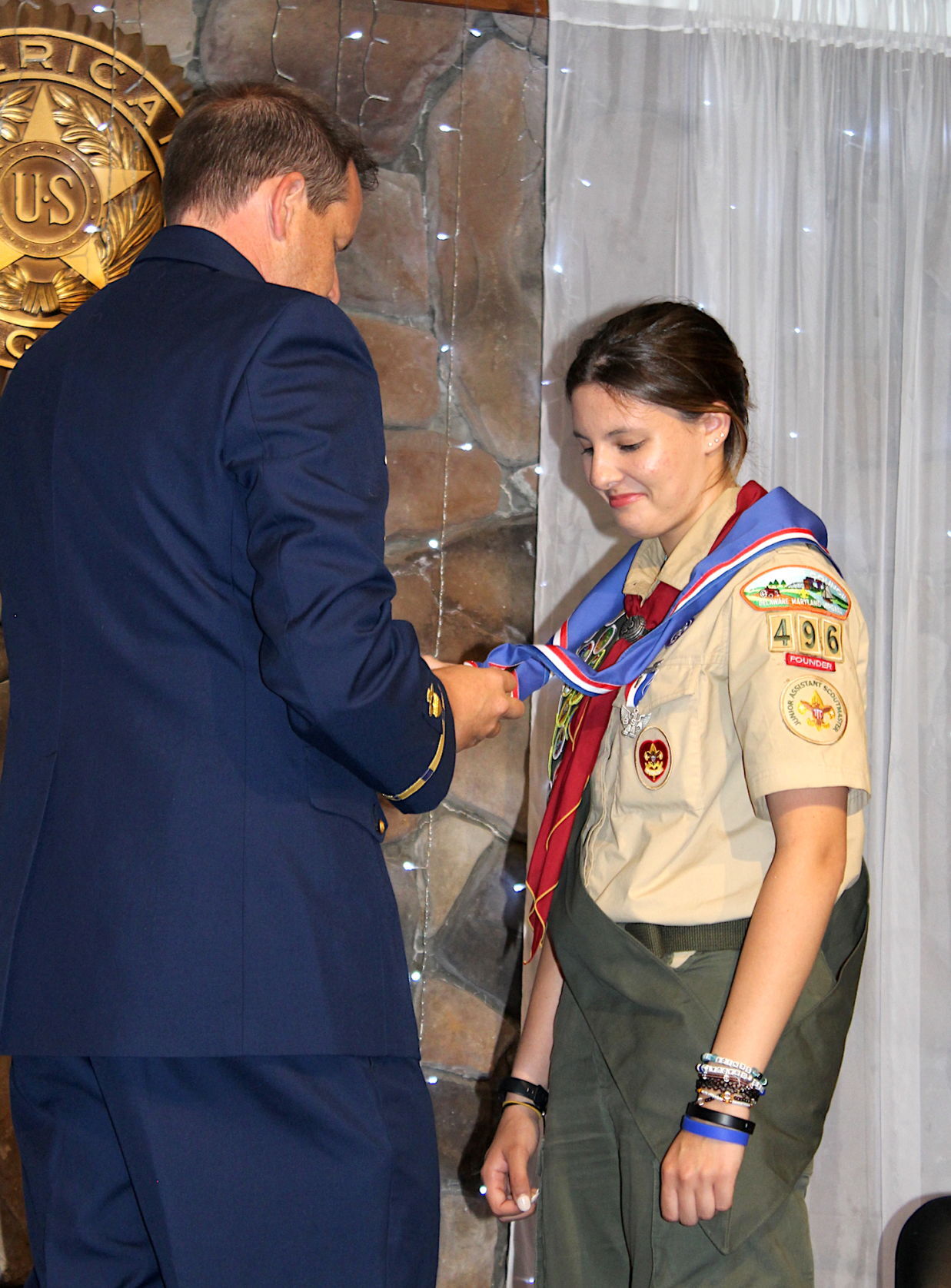 Jenna’s father, U.S. Coast Guard Officer Michael Scalia, had the honor of placing the Eagle neckerchief over the shoulders of his daughter, as she was awarded the rank of Eagle Scout, Thursday evening, June 3. Michael is also an Eagle Scout who grew-up in Long Island, N.Y. 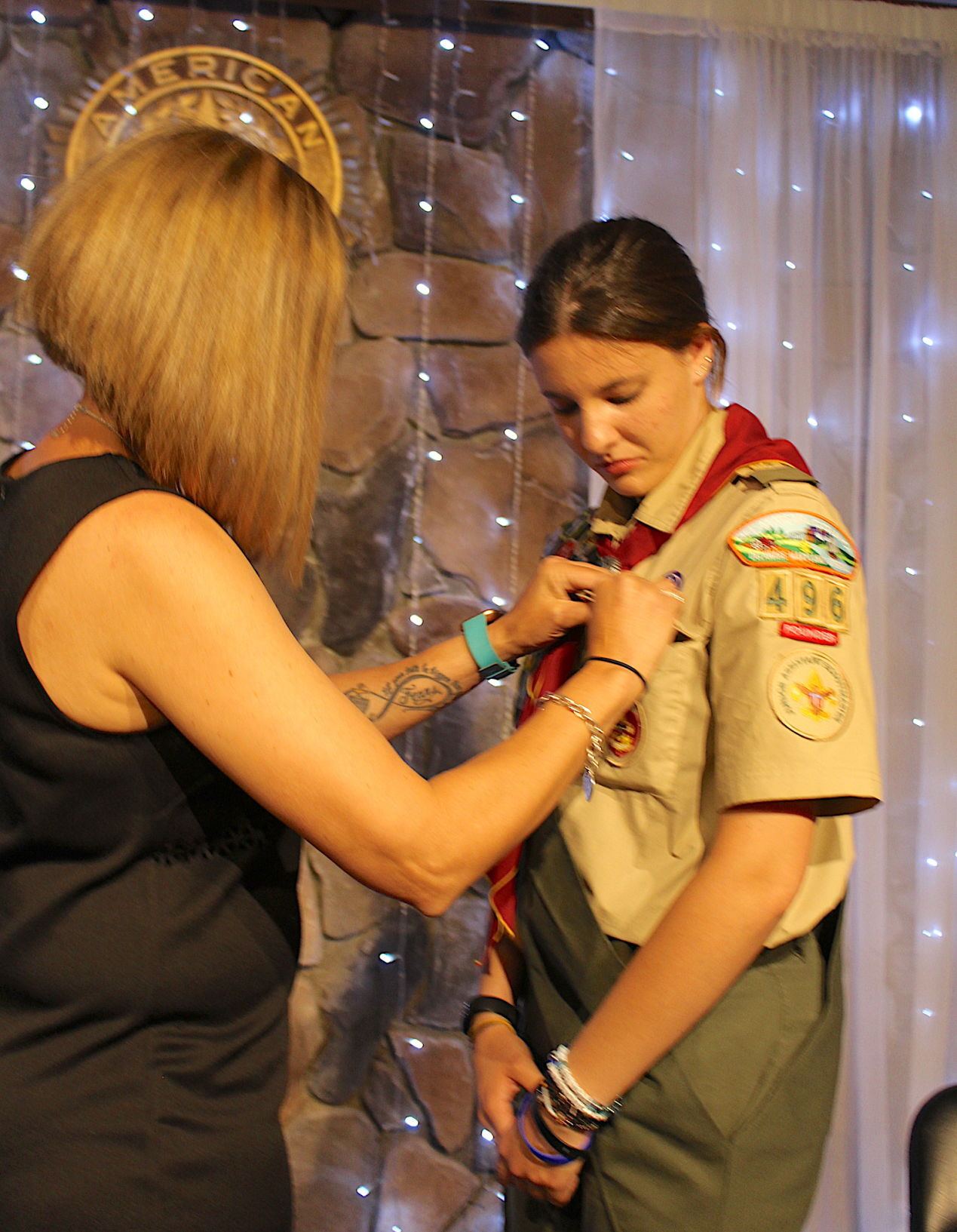 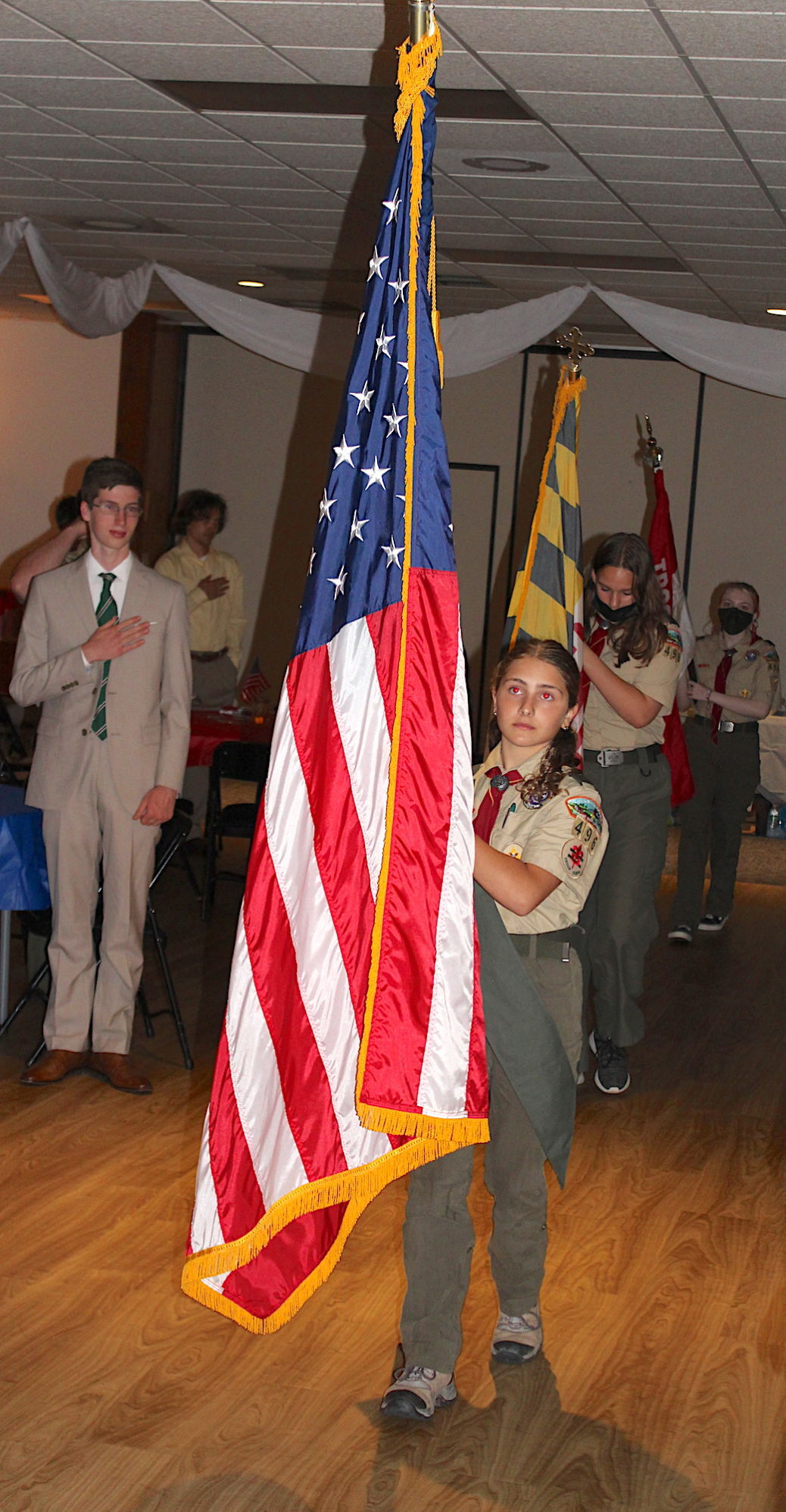 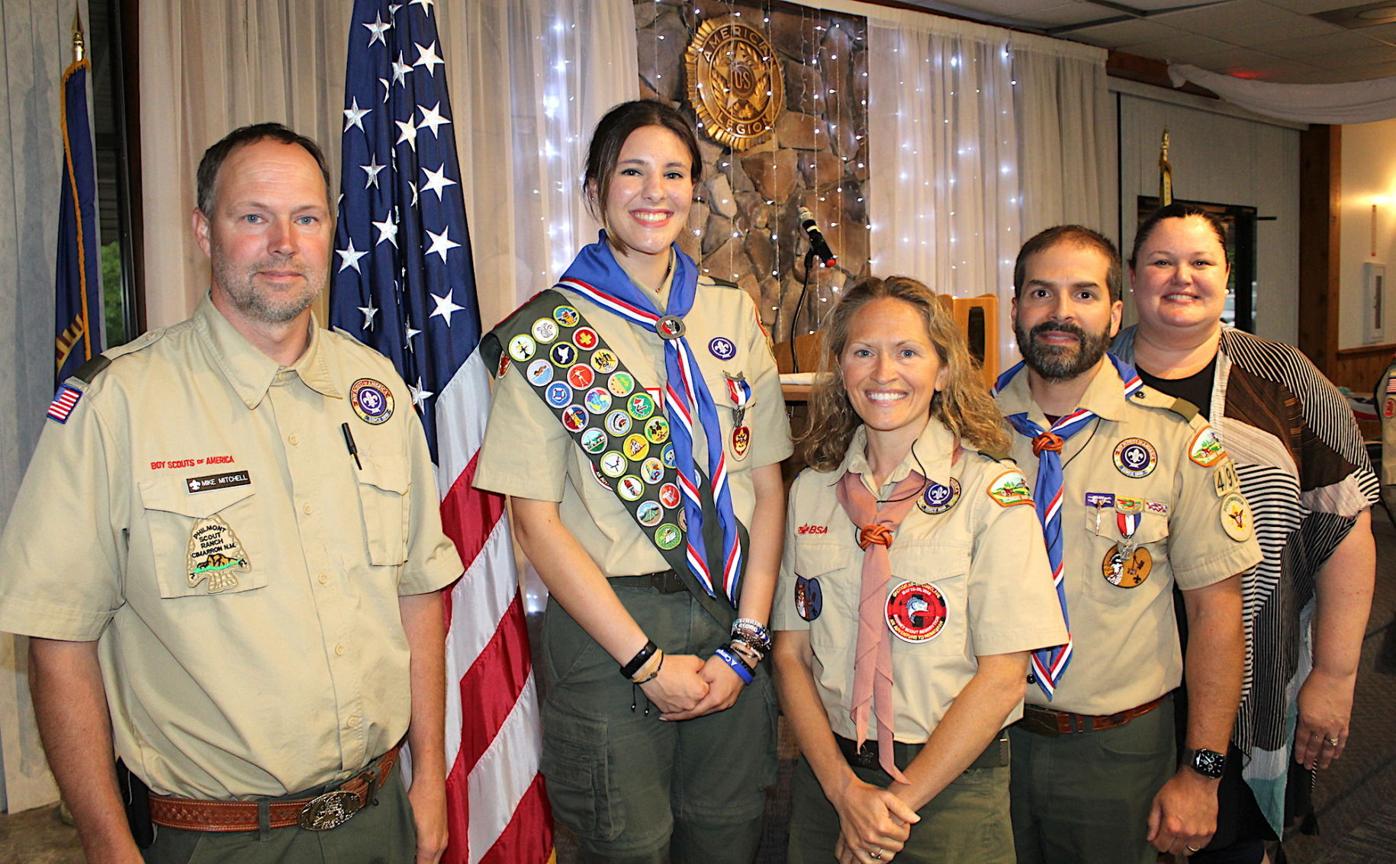 BSA Troop 496 Assistant Scoutmaster Michael Mitchell pins on an Eagle Scout recognition on Jenna Scalia, during her Eagle Court of Honor, Thursday evening, June 3. The Court of Honor took place at the Kent Island American Legion, Post 278, in Stevensville. Mitchell served as Master of Ceremonies for the program.

Jenna’s father, U.S. Coast Guard Officer Michael Scalia, had the honor of placing the Eagle neckerchief over the shoulders of his daughter, as she was awarded the rank of Eagle Scout, Thursday evening, June 3. Michael is also an Eagle Scout who grew-up in Long Island, N.Y.

STEVENSVILLE — Eagle Scout, Jenna Scalia, recently turned 18, graduated from Kent Island High School on June 2, and the next day, the evening of Thursday, June 3, an Eagle Court of Honor, was hosted by her troop, BSA Troop 496, sponsored by the Kent Island Elks, Lodge 2576, in Stevensville, celebrating Jenna making local history — becoming the first-ever Eagle Scout from the troop, and the first female Eagle Scout from the Eastern Shore of Maryland.

Her rapid journey to Eagle took a total of 22-months from the day she enrolled in the BSA Scouting Boys & Girls program that was launched a little more than two and a half years ago by the previously known Boy Scouts of America organization. At that time it was announced that girls could join the new "BSA Scouting Boys & Girls" program.

Girls have been permitted previously to join Cub Scout Packs, and also Venture Scouting (coed) Units for older teens, and also Scout Explorer Posts (again, for older teens) which are career focused units. The final step was to be permitted to join Scouting, beginning at 11 through 17 years of age, and have the possibility of becoming an Eagle Scout, which until now, has been available only to boys.

The Boys and Girls troops are run separately from one another, segregated, under the same BSA Scouting umbrella. The boys and girls troops both have the same requirements, however, each has a separate "Scout Handbook" — identical in every way, except the boy's book has all boys pictures in it, and the girl's handbook has all girls pictures, both doing the same activities. The only time the boys and girls troops come together are at summer camps, camporees, merit badge colleges or national jamborees.

BSA Troop 496 was founded just over two-years ago, with the Kent Island Elks sponsoring the unit, and hosting their weekly troop meetings, mostly under the Elks outdoor pavilion, year-round. The winter months and even during the pandemic, neither challenge hardly stopped them from meeting. CDC guidelines were strictly enforced with face masks being worn and social distancing. During winter months, the troop dressed appropriately, considering the weather conditions for that day, as if being on an outdoor campout. The troop has been led by Scoutmaster Will Koch, an Eagle Scout in his youth, his wife, Ann, as Assistant Scoutmaster, and Assistant Scoutmaster Mike Mitchell. The three took over from founding Scoutmaster Beth Yonts after she started the troop.

Jenna, along with the other girls in the troop said they were interested in doing the same outdoor activities they saw their brothers doing as Scouts; hiking, camping, boating, learning life skills such as first aid, going on high adventure outings, etc.

As is required for all Scouts to earn the Eagle rank, Jenna had to earn a minimum of 21 merit badges, most of those "Eagle required" badges, such as First Aid, three citizenship merit badges, camping and swimming among others.

Of the merit badges she earned, she said "Swimming" was the most challenging or difficult, as it was done during summer camp "in the heat of the day — any way to cool off was a blessing!". "Athletics merit badge was the most fun," Jenna said, "My counselor was awesome and I had a ton of fun with it. On top of that, I was the only girl in the class so it was amusing to see their (the boys) faces when I showed up on the first day!"

She served in a variety of leadership positions within her troop, including; Assistant Senior Patrol Leader, Chaplain's Aid, and Senior Patrol Leader. She completed her Eagle Scout Project, at the Kent Island American Legion, Post 278, in Stevensville, building a "bio-swale" next to the baseball field behind the Legion. It serves as a natural water collection and filtration system. As part of the bio-swale, she planted native Maryland trees alongside the field too.

Of her most memorable Scouting experiences, she said "It was at summer camp in 2019, I was so moved by the chaplain's prayer for me. It was then, I vowed I would make it to Eagle."

Jenna credits her Scout leaders for helping her earn her Eagle. However, "my parents definitely deserve the most praise. They've been super supportive and have guided me the whole way."

Jenna has also been active in school, being a member of the Cross Country, where she served as Team Captain, and Track teams. She was a member of the school's Interact Club, Students Against Destructive Decisions (SADD), Journalism and Writing clubs. She plans to attend Mt St. Mary's University in Emmittsburg in the fall, majoring in Communications, and minoring in Creative Writing. She is a member at St. Christopher's Catholic Church in Chester.

Brad Lundberg, longtime adult Scouter was present at Jenna's Eagle Court of Honor. Lundberg, a local Kent Island businessman, is founder of the KI Rotary Club, and currently serving a second term as leader of the club. He is also currently serving as Choptank Scout District Chairman. His experiences in Scouting are extensive. He was very complimentary of the leadership of BSA Troop 496, especially Scoutmaster Will Koch and his wife, Ann. He said, "Both are totally committed. They're involved in two different troops with their children, and both having completed the adult Wood Badge training."

Lundberg added, "The girls in Troop 496 are serious, and that all starts with the troop leadership. Don't get me wrong, the girls have fun, but, their also wanting to learn and advance in the program. It's one of the best programs I've seen in scouting anywhere!" Lundberg's grand-daughter, Lacey Lundberg, 14, of Glen Burnie, comes to Kent Island every Tuesday to be part of the program.

Delmarva Scout Council Executive Robert Nakagawa also spoke at Jenna's Court of Honor, congratulating her, and joking, "Really, to make your parents truly happy, you're going to have to marry an Eagle Scout someday!" (Much laughter followed) Scoutmaster Koch was visibly moved during the program, while looking at Jenna, saying, "Jenna, you're now 'a marked' young woman. You're an Eagle Scout, and people are going to watching you expecting a role model for others."

Finally, Jenna was permitted to speak after receiving her Eagle award. Along with thanking everyone in the room who had helped her along the way, she told the other girls in the troop, "I hope your will be proud, not of me, but of each other. You're all part of a history making troop."

The rank of Eagle is nationally considered a remarkable accomplishment, as less than 4% of all youth who join BSA Scouring actually achieve the rank. Businesses have long taken into account on job applications the importance of a candidate who has achieved the Eagle award. The U.S. military, all branches, award a higher pay grade to those who have earned their Eagle, upon completing basic training.