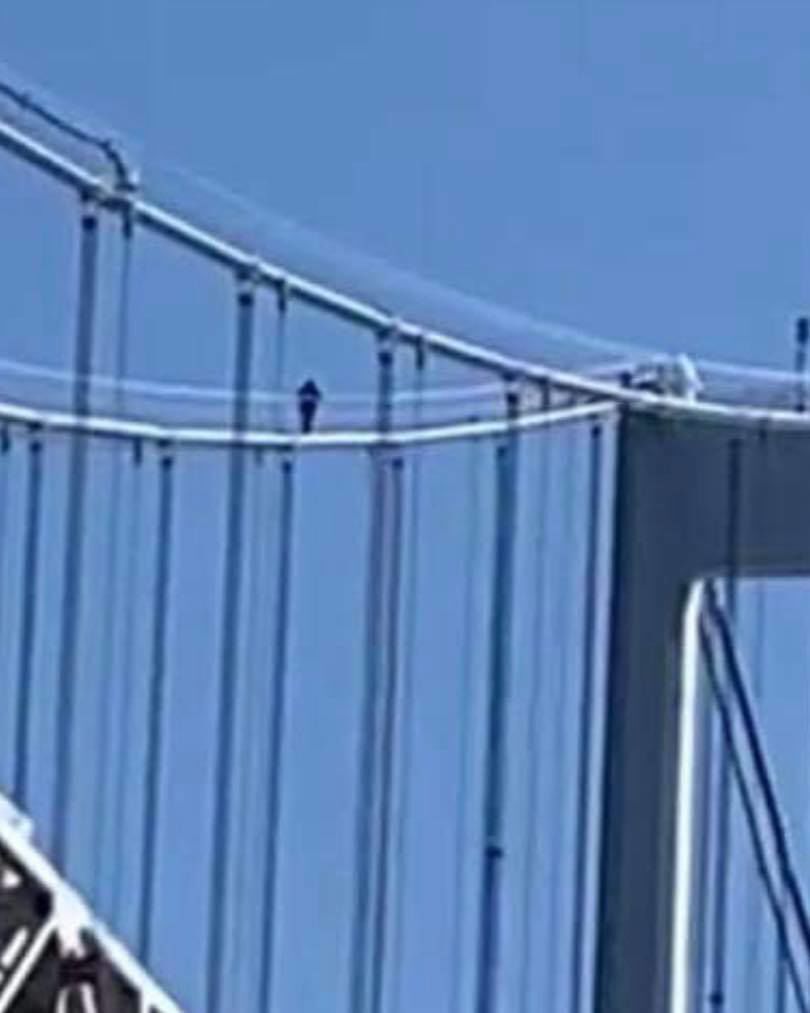 A photo shared to social media on Oct. 3 shows an individual walking along the top of the Bay Bridge toward the peak.

Rescue workers atop the Chesapeake Bay Bridge seek to help a man who climbed towards the peak.

A photo shared to social media on Oct. 3 shows an individual walking along the top of the Bay Bridge toward the peak.

Rescue workers atop the Chesapeake Bay Bridge seek to help a man who climbed towards the peak.

STEVENSVILLE — A man experiencing a mental health crisis climbed the superstructure of the Bay Bridge Saturday, Oct. 3, tying up traffic for hours as emergency responders worked to talk him down.

Maryland Transportation Authority Police and vehicle recovery technicians responded to a stopped vehicle on the westbound span of the bridge about 9:40 a.m. Saturday, Oct. 3.

An eyewitness described seeing a younger, white male standing on the very top of the bridge’s superstructure on the middle span near the red maritime navigational light. The witness observed gates on the approach cables that are designed to keep people off of the top of the bridge’s towers.

“This guy climbed right over them,” he said.

Don and Kathy Trotter were able to observe the last harrowing minutes of the rescue effort. Just after 6 p.m. the man who had been at the top of the bridge since Saturday morning was successfully lowered to the waiting crew of first responders on the bridge deck below.

Trotter had been watching the rescue through his telescope on their back deck in Kent Island and quickly alerted his wife when one of the seven or eight responders who had climbed the stanchion to the nearly highest peak of the bridge leaned forward to grab the individual in distress.

Trotter said it looked as if “he was making a move to jump when he was grabbed back by the rescue crew and held down.”

Lawrence Schultz, assistant fire chief with AAFD, tweeted later, “This incident is over, but not before an incredible act of heroism from our members. Nearly 400 feet above the water, a split second to act, and it ended safely, but not before a truly heart-stopping few minutes. I could not be more proud of our team.”

From Trotter’s perspective, he said it looked as though a line was extended from the rescuers in the air to the ground crew below and a gurney of some type was used to secure the man to the line before being lowered into the raised bucket of a waiting fire truck.

The bucket was then lowered — taking about a minute to reach the bridge’s surface — and was immediately surrounded by first responders who ran over to assist, said Trotter.

“These people need help and someone to talk to,” said Trotter of the many individuals who attempt or have committed suicide from the Chesapeake Bay Bridge. He said it is concerning that so many feel helpless or hopeless and are led to this unthinkable option.

The first responders who conduct these rescue missions are to be commended, he added.

MDTA Police took the individual involved in this incident into custody on a petition for emergency evaluation. The subject was immediately transported to a local hospital and released to the hospital’s custody. MDTA Police detectives are consulting with the Anne Arundel County State’s Attorney’s Office to determine if criminal charges will be filed.

MDTA Police spokesman, Cpl. Bradley McCormick was unable to verify whether this person was the same individual who had made a similar climb that led to a more than 20-hour rescue mission on Aug. 20.

“As a matter of policy, the MDTA does not routinely discuss its deterrent methods; however, we remain committed to taking any necessary steps that we can to assist in suicide prevention. Throughout the years, we have worked proactively with the community to encourage individuals to seek mental-health opportunities and to discourage the media from reporting on such acts, as such reporting can promote suicide to others through suicide contagion,” he said.

MDTA has installed call boxes on bridges to offer a direct link to the state’s suicide hotline for those seeking help. Additionally, traffic cameras are continually monitored for stopped vehicles to quickly dispatch units to the scene, McCormick said.

MDTA trains all police and maintenance personnel in suicide-intervention techniques, and MDTA Police commanders and MDTA facility administrators use every serious incident as an opportunity to review operational, training and safety needs, he added.

It is the policy of the MDTA to withhold statistical information regarding the number of suicides, attempted suicides, or lookouts for suicide at MDTA facilities.

McCormick described “suicide contagion’ as the exposure to suicide or suicidal behaviors within one’s family or peer group or through media reports that can result in an increase in suicide and suicidal behaviors.

“While it is never the intention of anyone to propagate suicide contagion, it has been shown that high profile situations like suicides of prominent persons or at a prominent location do increase suicide attempts,” he said.

Ways to help mitigate suicide contagion include reminding people that there are people and resources that can help if they are in a crisis.

Maryland’s Helpline is available around the clock to callers in need of crisis intervention. Trained counselors are available to help callers struggling with such issues as drug or alcohol use, depression, anxiety, suicidal/homicidal thoughts, physical and sexual abuse and more.

Marylanders can also text 898-211 to sign up for MD Mind Health, a mental health initiative launched by the Maryland Department of Health in July to fight isolation and promote wellness. Those who sign up receive encouragement, reminders and resources for staying connected. Messages include tips about self-compassion and self-care, concrete suggested actions, recommended podcasts and apps, inspirational quotes and information on how to find community resources and get help if needed.

Once the man was taken to the hospital, traffic patterns returned to normal. All lanes were reopened at approximately 6:55 p.m. on Saturday. Eastbound delays cleared at 7:05 p.m. and westbound delays at 8:30 p.m.