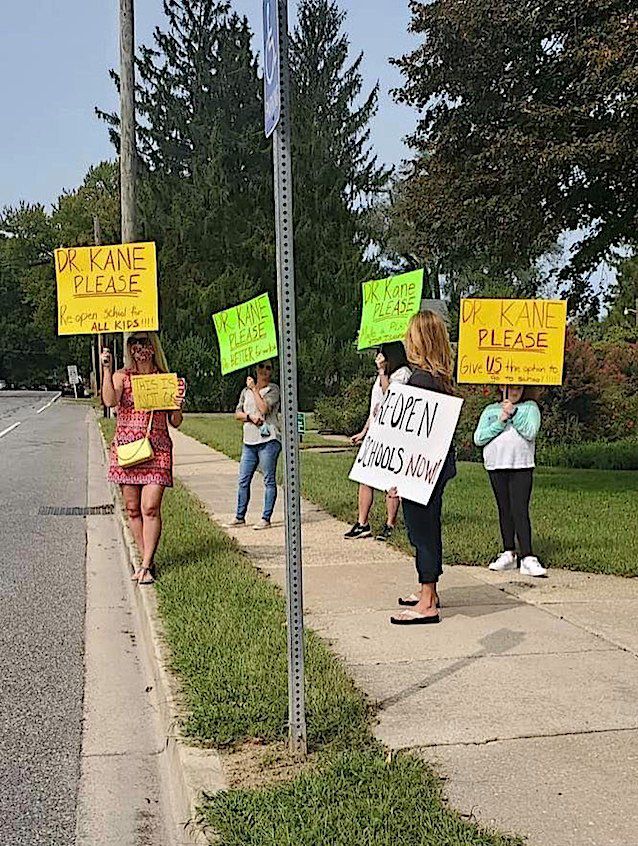 Parents and students take to the sidewalk in front of the Queen Anne’s County Public Schools central office to plead for Superintendent Dr. Andrea Kane to reopen schools.

Parents and students take to the sidewalk on Sept. 15 in front of the Queen Anne’s County Public Schools central office to plead for Superintendent Dr. Andrea Kane to reopen schools.

Parents and students take to the sidewalk in front of the Queen Anne’s County Public Schools central office to plead for Superintendent Dr. Andrea Kane to reopen schools.

Parents and students take to the sidewalk on Sept. 15 in front of the Queen Anne’s County Public Schools central office to plead for Superintendent Dr. Andrea Kane to reopen schools.

CENTREVILLE — Parents, grandparents and teachers are expressing their frustration over students not returning to school. As it stands now Queen Anne’s County Public Schools will not see a full return of students to the classroom until January 2021.

With concerns that they are not being heard by Superintendent Dr. Andrea Kane and the Board of Education, several of those parents decided to stage a protest in front of the central office Tuesday afternoon, Sept. 15. Leading the group was Ashley Gick, a registered nurse and mother of twin fifth-graders.

Gick said she and other parents have been trying to contact Kane and school board members since the virtual school year ended in June. They continued emailing through the summer and “it’s just crickets,” she said, frustrated with the lack of response.

As they stood outside the office with signs reading “Virtual isn’t Working” and “Dr. Kane please reopen schools now,” the parents were watched by staff from the windows, but no one came out and spoke to them, Gick said.

There are parents and other caregivers of students who are drowning in this current situation, she said, of the online schooling necessitated by the coronavirus pandemic. As a nurse who has worked on a COVID-19 unit in Anne Arundel, Gick said she recognized the concerns for the virus, but here the case numbers are dramatically lower. She said parents see neighboring counties reopening and wonder why Queen Anne's isn't phasing students back in to school.

Upsetting too, said Gick, is the AlphaBest program that had traditionally been used in the elementary schools for before and after school care, that is now operating for a fee inside Queen Anne’s County schools. Parents have to pay a fee to send their students to the same building that they would be attending normally for school, and the school system is collecting a fee for allowing the use of the building.

Gick said it makes her wonder why those students can be in the building and others cannot.

Parents having to be home to proctor home learning, Gick said, and the prolonged virtual learning is taking a toll on kids' mental health as well as a physical toll. There are students who have IEPs that need to be addressed, and there are other students who need extra help focusing or aid for behavioral issues, she said, noting home learning isn’t the solution for some of those children.

Gick said she and many other parents responded to school system surveys about the plan to return to school this fall, but she doesn’t believe their feedback was taken into consideration. One issue, being able to adequately transport students via bus with appropriate distancing, might be remedied by having rotating days for students so not all are in class the same day, she said.

Gick said she also knew many who would be willing to take turns carpooling or driving their student to school instead of sending them on the bus.

We have tried to submit comments for the board meetings as requested by the school system, but most of us were either not replied to or weren’t able to speak at the board meeting because they had to submit in writing to be allowed to speak, she noted.

“We’ll give all we’ve got to get these kids back,” said Gick, “and we just want to see it reciprocated (by school administration).”

When reached for comment Kane said she was unable to discuss personnel matters. The topic of plans to return to school was be discussed during the board work session on Wednesday, Sept. 16, Kane said.