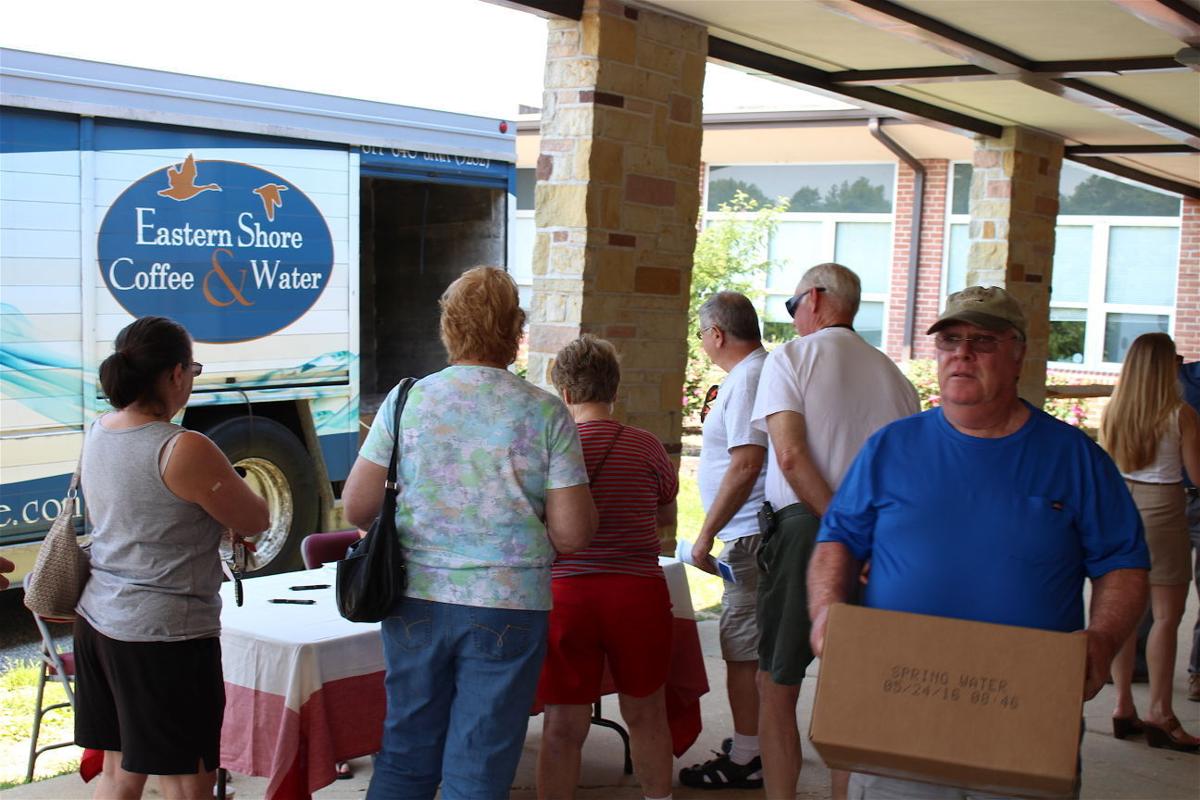 Pearce Creek-area residents pick up bottles of water May 28 following a meeting with federal, state and local health officials. 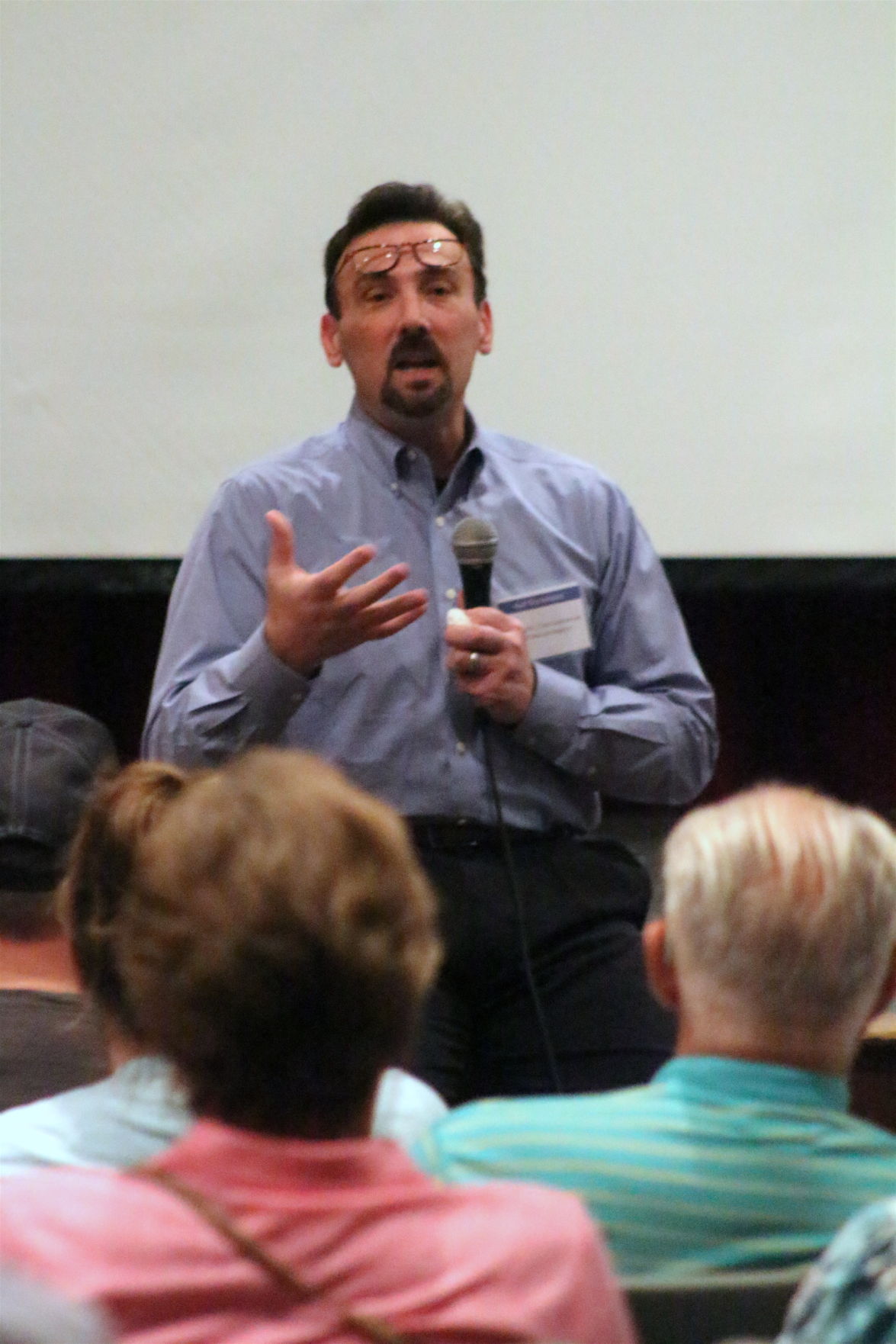 Dr. Karl Markiewicz, a federal toxicologist, discusses the findings of a review of data collected from Pearce Creek-area residential wells in 2013.

Pearce Creek-area residents pick up bottles of water May 28 following a meeting with federal, state and local health officials.

Dr. Karl Markiewicz, a federal toxicologist, discusses the findings of a review of data collected from Pearce Creek-area residential wells in 2013.

CHESAPEAKE CITY — “Everyone has heard of Flint, Mich., and its issues with lead. This is not that situation.”

Dr. Karl Markiewicz, a toxicologist with the U.S. Center for Disease Control’s Agency for Toxic Substances and Disease Registry, summed it up best as he tried to alleviate worries from the dozens of Pearce Creek-area residents who attended a hastily scheduled public meeting at Bohemia Manor High School May 28.

Two weeks earlier, the ATSDR, upon reviewing data of residential wells in the communities bordering the Pearce Creek Dredge Material Containment Facility in Earleville, recommended that residents switch to drinking and cooking with bottled water due to concerns about the effect of high manganese levels on infants and young children.

Manganese, a naturally occurring metal found in rocks, is currently a contaminant still under review by the Environmental Protection Agency. A secondary standard of 0.05 milligrams per liter was set for drinking water for aesthetic reasons, as high manganese levels can cause staining as well as an odor. Meanwhile, a lifetime health advisory rate of 0.3 milligrams per liter and a short-term acute standard of 1 milligram per liter for 10 days have also been adopted by the EPA.

“Lead has no benefit to the body whatsoever, but manganese is an essential nutrient that we need for healthy growth and development of the body,” Markiewicz told the crowd. “It’s when you have too much that you have the potential for toxicity.”

Markiewicz confirmed that a growing number of studies suggest that prolonged ingestion of high levels of manganese, especially by infants and young children, could be neurologically damaging in regards to memory and motor activity. Those studies, especially two from Bangladesh in Southeast Asia, typically saw daily consumption of water with manganese levels of 0.5 milligrams per liter or more for at least five years, Markiewicz said.

“In these studies, there are often other chemicals in the mix,” he said, explaining such variables make it hard for scientists to draw firm conclusions. “The Bangladeshi water had high levels of arsenic as well as manganese, along with other things.”

The situation here differs from Flint because in the Pearce Creek communities of Bay View Estates, West View Shores and Sunset Pointe, as well as homes along Pond Neck Road, the overwhelming majority of homes either have water treatment systems or exclusively drink bottled water.

For decades, homeowners have contended with degraded well water as the byproduct of years of dredge spoil leaching into the aquifers that feed residential wells. Therefore, most do not drink raw water and treatment systems, when serviced properly, have been proven to effectively remove excessive levels of manganese.

While those private residential wells are not regulated by the federal government, local officials grew concerned about findings in the Pearce Creek communities and sought help.

Fred von Staden, the health department’s Environmental Health Services Division director, said his department contacted the CDC in July 2014 about concerns in the Pearce Creek well water datasets and sent them to the CDC a month later.

While manganese, as a secondary standard, is not typically tested for in health department studies of well water, it was included in 2013 due to the U.S. Geological Survey’s request for a broader sampling in response to residents’ concerns. Elevated levels of manganese as found in the Peace Creek area is not what one would typically find in Cecil County, von Staden said.

Health department officials cautioned homeowners from reading too much into the data, however, noting that each test of groundwater is only a “snapshot in time.” Groundwater found in aquifers moves, meaning that concentrations of chemicals do not remain in perpetuity but change often.

Von Staden said that his department identified 25 properties that had data sets in both 2011 and 2013: five of which had better raw water quality in 2013, while seven had worse — two of which had grown from below secondary levels to levels of concern for the CDC. The 10 percent of homes with treated water levels of concern identified by the CDC may also be those in need of treatment system servicing, he added.

“If you service your treatment system, they are very effective in removing chemicals of concern,” he said.

Officials stressed that manganese is only a chemical of concern if ingested, and residents should not be worried about skin contact. While there are a handful of homes where officials know residents consume raw well water, the new recommendations do not mean that there is a need for prior concern.

“Bottled water is being implemented now because there is recognition of more concern,” von Staden said, noting that the CDC’s full analysis of the data is expected be released later this year. “They saw enough about manganese to draw concern now. You want to be proactive in the protection of the public’s health.”

Manganese is a naturally occurring metal that is found in many types of rocks. Pure manganese is silver-colored, but does not occur naturally. It combines with other substances such as oxygen, sulfur or chlorine. Manganese occurs naturally in most foods and may be added to some foods.

Manganese is used principally in steel production to improve hardness, stiffness and strength. It may also be used as an additive in gasoline to improve the octane rating of the gas.

Yes and no. There is no primary level for health concerns in manganese ingestion, but a secondary level of 0.3 milligrams per liter has been set for aesthetic reasons.

When to be concerned?

Primarily ingestion of water that contains high levels of manganese as well as cooking with such water. Contact with skin, eyes or open wounds is not of concern.