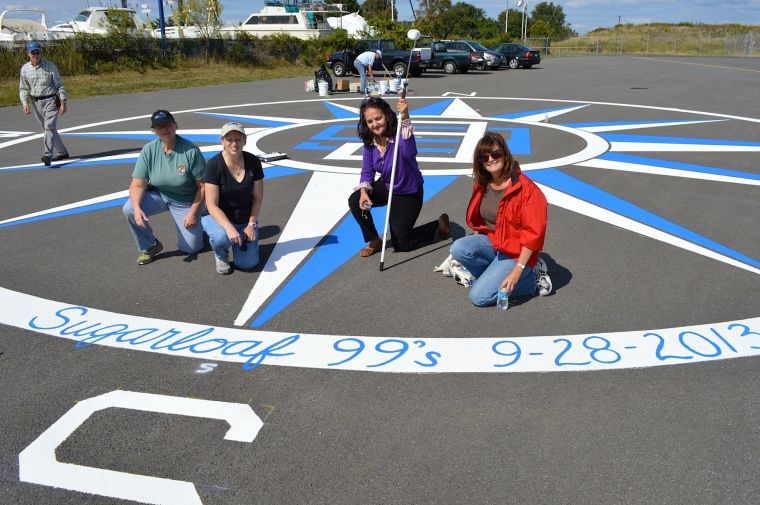 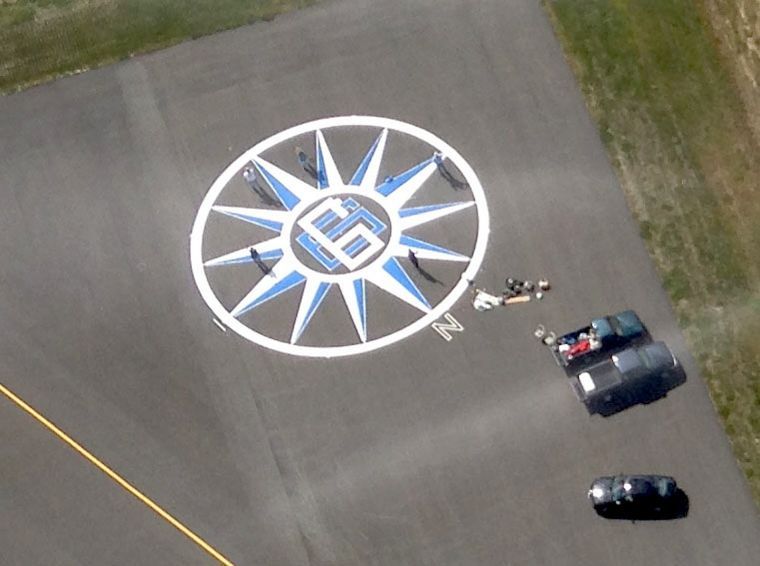 STEVENSVILLE — Lin Caywood, International Board Member and Sugarloaf Chapter Membership Chair is proud to announce the completion of a 50-foot Compass Rose Painting Project at Bay Bridge Airport in Stevensville.

The project was a joint effort between the Chesapeake Sport Pilot flight school, which is based at the airport, the airport, and The Ninety-Nines. Nine volunteers, assisted by another half dozen “behind the scenes” helpers completed the layout and painting in just under six hours using a traditional 12-point pattern. The Compass Rose is located approximately mid-field on the North Ramp of the airport. Compass roses or wind stars are traditionally used at airports to help pilots orient or verify the accuracy of their onboard navigational equipment.

“Bay Bridge’s original compass rose was in disrepair then paved over during recent airport improvements. We were really excited when the 99’s offered to come spearhead a new compass rose even bigger and better than our original one. Our students, pilots and other CSP volunteers were eager to assist them with this project,” said Helen Woods, chief flight instructor, Chesapeake Sport Pilot.

“Airmarking has been the noble ambition of the Ninety-Nines since the early part of the 20th century,” said to Ellen Nobles Harris, airmarking chairman for the international organization. Harris, who has researched the history of airmarking, noted that an early President of the 99’s, Phoebe Omlie, organized the U.S. government sponsored program as part of the Bureau of Air Commerce in 1934 to provide markers on the ground or on rooftops about every 20 miles to aid pilots with navigating to their intended destination. An all-women staff assisted Omlie with her project and included well-known women pilots as field representatives — Helen Richey, Blanche Noyes, Nancy Harkness and Louise Thaden.

During World War II, reverse air-marking efforts were undertaken by The Ninety-Nines and the Bureau of Air Commerce to black-out the previously marked airports and airways to prevent enemy planes from spotting airports for bombing or sabotage.

Although airmarking is no longer government sponsored, The Ninety-Nines carry on the tradition of fulfilling the need for airmarking by volunteering their time to help paint airport names and radio frequencies, compass rose symbols and other needed identifiers. Some of the letters painted can be 50 feet tall and compass roses average 80 feet in diameter.

“Even in the age of GPS navigation and extremely accurate navigation charts, it’s comforting to fly to an airport and see the name of the airport or a beautiful compass rose to welcome you and confirm where you are,” said Caywood, a private pilot. “Airmarking is a fantastic aviation tradition,” said Linda Steiner, manager of the Bay Bridge Airport. “We were appreciative that the volunteers from The 99’s and Chesapeake Sport Pilot were willing to help donate their time to helping us uphold this tradition at the Bay Bridge Airport.”

The Ninety-Nines Inc. is an international organization of licensed women pilots, founded in 1929 by Amelia Earhart and 98 more of the 117 certificated women pilots at the time. The Sugarloaf Chapter of The Ninety-Nines is based at Frederick Municipal Airport in Frederick and meets on the second Thursday of each month at the Airways Inn at 6:30 p.m.