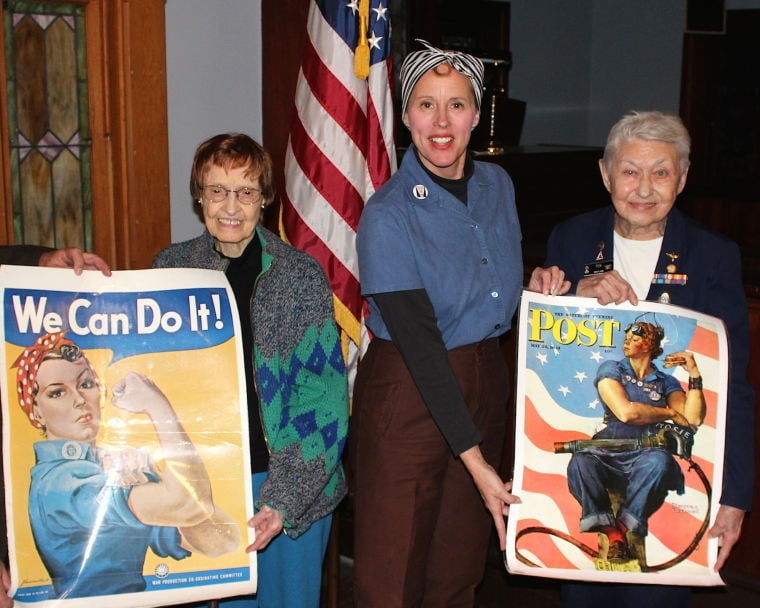 From the left, Loretta Paytash, 93, of Stevensville, “Rosie the Riveter” performer Mary Ann Jung, of Arnold, and Mary Feik, 91, of Cape St. Claire, following Jung’s one women performance of the legendary image of American working women during World War II. Paytash and Feik were real “Rosies.” Paytash made hand grenades, and Feik became a test pilot. 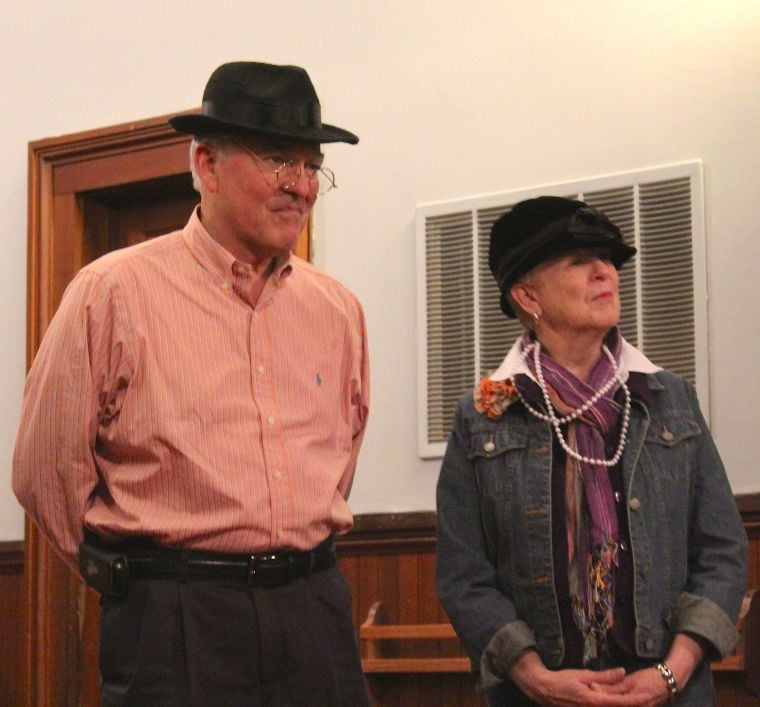 Playing the role of President Franklin and Mrs. Eleanor Roosevelt, from the left, locals Wheeler Baker and Linda Elias took part in the Rosie the Riveter performance at historic Christ Church in downtown Stevensville Wednesday evening, March 18. The event was sponsored by Kent Island Heritage Society. 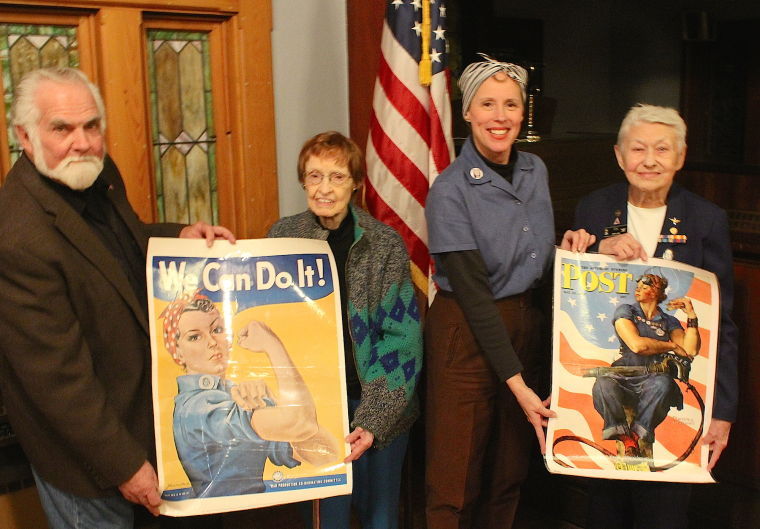 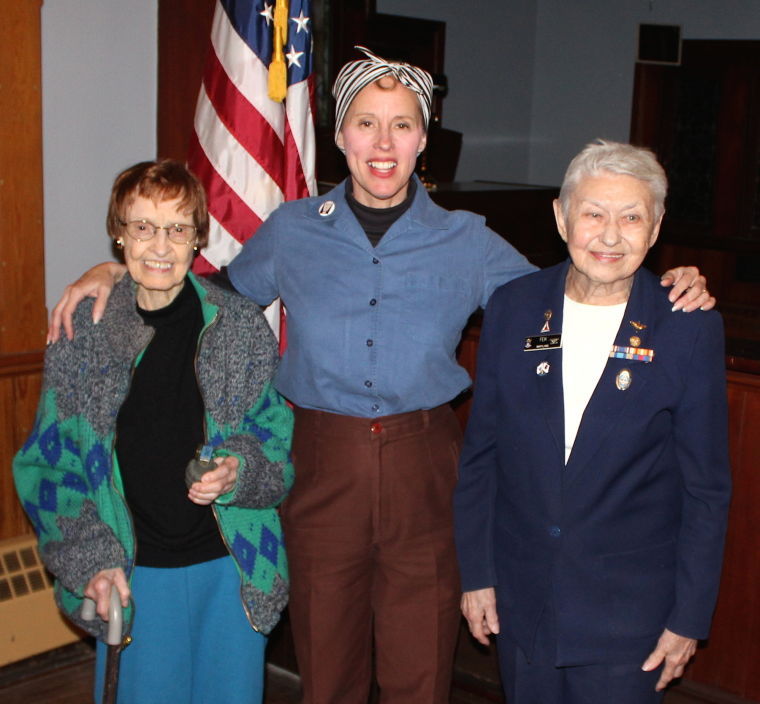 From the left, Loretta Paytash, 93, of Stevensville, “Rosie the Riveter” performer Mary Ann Jung, of Arnold, and Mary Feik, 91, of Cape St. Claire, following Jung’s one women performance of the legendary image of American working women during World War II. Paytash and Feik were real “Rosies.” Paytash made hand grenades, and Feik became a test pilot.

Playing the role of President Franklin and Mrs. Eleanor Roosevelt, from the left, locals Wheeler Baker and Linda Elias took part in the Rosie the Riveter performance at historic Christ Church in downtown Stevensville Wednesday evening, March 18. The event was sponsored by Kent Island Heritage Society.

STEVENSVILLE — In recognition of Women’s History Month, the Kent Island Heritage Society on Wednesday, March 18, hosted a one-woman performance of “Rosie the Riveter,” the symbolic image of American women going into the nation’s workforce, taking non-traditional female jobs while many men were overseas fighting in World War II. The performance, which took place at historic Christ Church in downtown Stevensville, was done by professional actress and living history re-enactor Mary Ann Jung, of Arnold.

Jung, who has appeared on CNN, the “Today Show” and “Good Morning, America” performing many different famous women from history, researches and writes her own scripts and performs in authentic costumes, accents and attitudes for her characters. Her show Wednesday was energetic, interactive and fun.

Before KI Heritage Society Vice President Nancy Cook introduced Jung, she told the audience, “Remember, this is Kent Island — the third oldest settlement in the U.S., and we’re proud of that!” She also reminded everyone that Jung was no stranger to Kent Island. Two years ago Jung had performed here as colonial Marylander Margaret Brent, the first woman in America to ask for the right to vote.

As she began her performance, Jung introduced herself as the real-life, widowed Rosie Monroe of Peducah, Kentucky, in 1942. Her husband had died in a car accident, leaving her with two young children to raise as a single parent. Rosie was hired to work in a factory, Willow Run, near Detroit, making B-24 bombers for the military and earning a whopping $6 a day. At this factory, sponsored by car manufacturer Henry Ford, men and women were paid equally for doing the same work — a highly unusual and unique situation in that day.

She used time-period vernacular, such as “that’s swell”, “peachy” and “heck, no!” Always in character, Jung told the story of millions of women who left their homes to make a contribution to the nation’s war effort, and their personal struggles to do so. She talked about well-known people of the day, aviator Charles “Lucky Lindy” Lindbergh and President Franklin and Eleanor Roosevelt, visiting the factory. She spontaneously picked people from the audience to play those roles and provided actual quotes that were made by those individuals, to read.

She said, “When people discovered that women worked at the factory, they made fun of the name, Willow Run, calling it ‘Will it run!’” Indeed, the factory was very productive, making one entire plane every hour, 13 planes per day.

Immediately involving the audience, Jung taught them to sing-along the actual Rosie the Riveter song, which ends with “She’s working for victory!”

She talked about a “shared gender housing” experiment at the factory that failed, struggles during the war with rationing of everything from food to clothing, and people having “victory gardens,” all in an effort to win the war.

She talked about women not being able to purchase stockings and “panties with no elastic waistbands to hold them up.” “How did the panties stay up?” she asked the audience. A reply came — “With a prayer!” — to the laughter of everyone.

She showed three different famous poster images of Rosie the Riveter with appropriate slogans attached: “We can do it!” “Do the job he left behind” and “Factory whistles are bugles, too!”

Two local, real-life Rosies were present in the audience: Loretta Stadtmiller-Paytash, 93, of Stevensville, and Mary Feik, 91, of Cape St. Claire. Both received applause honoring their service to the nation during the war.

Jung told her, “I’m glad you’re still alive to tell us about it!” to laughter of the audience. Recently, Paytash and her daughter, Becky, visited a restaurant on Kent Island, meeting a World War II veteran. While talking there, the veteran was astonished to discover what Paytash had done during the war, telling her, “That’s amazing — I threw hand grenades during the war” — thinking he might have thrown one that she had assembled.

Mary Feik was hired as federal government worker during the war at the age of 18 and eventually became a female pioneer in aircraft maintenance, writing flight training manuals. She received her original flight training in the then 1940s military P-51. She eventually flew B-29 bombers as a test pilot during the war. The work she did during the war as an airplane mechanic and engineer led to a 77-year career in aviation. She has logged over 9,000 hours as a test pilot. She did most of her work at Wright’s Field, in Dayton, Ohio. She is today a full colonel with the Civil Air Patrol.

After the performance, Jung spoke about how personal it is for her to re-enact famous women of history, especially those like Rosie the Riveter. She said, “My father and brother are both veterans.” She recited a prayer, telling the audience, “Eleanor Roosevelt reportedly said this every night during World War II, before she went to bed.” Part of the prayer includes the words: “someone (a soldier) out there died for me today — Am I worth dying for?”

Jung agreed after the performance she had “implied that we all need to remember the sacrifices people have made for our nation, and for sure, be worthy of those sacrifices by the way we live our own lives.”

Jung has portrayed Clara Barton, Elizabeth Cady Stanton, Amelia Earhart, and Queen Elizabeth I. She performs for school groups, veterans and has also performed at senior centers. She said the real Rosie Monroe died in 1997. For more information about Jung, go online at www.MaryAnnJung.com.