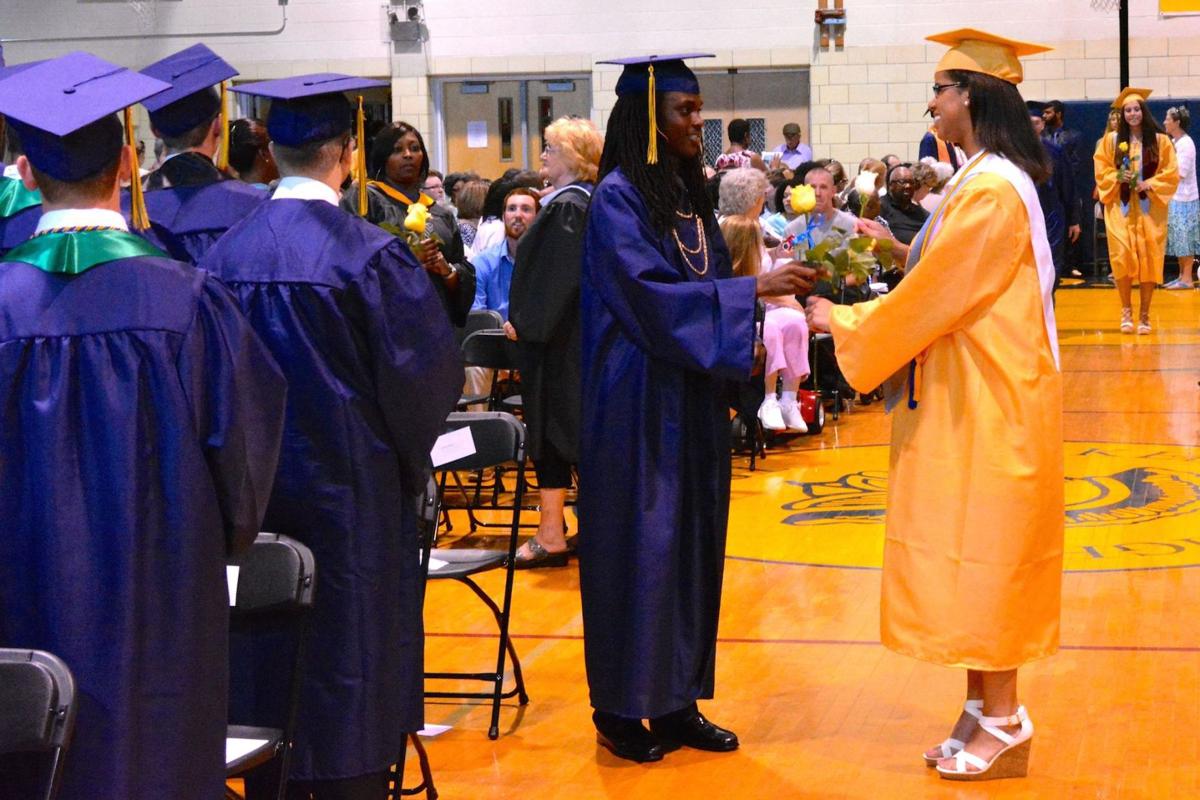 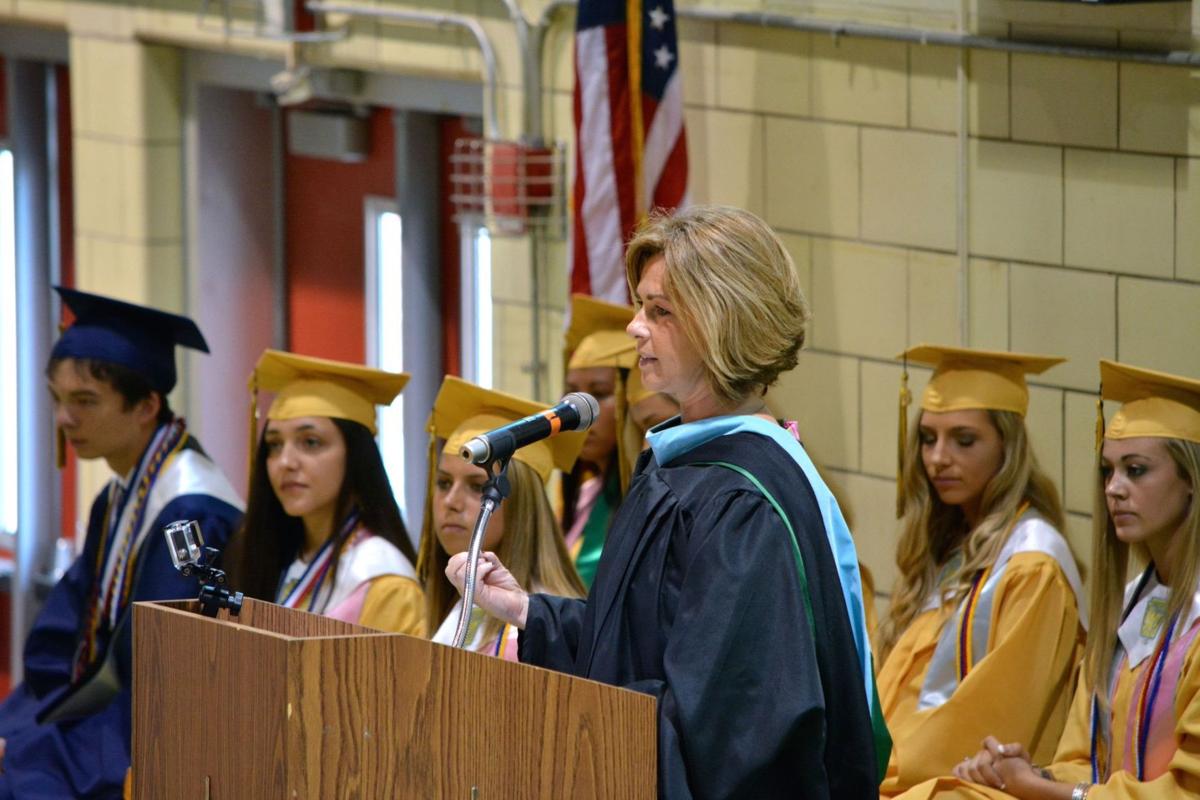 Principal Tracey Williams lists the many accomplishments of the Class of 2016 at Kent County High School graduation Saturday, June 4. 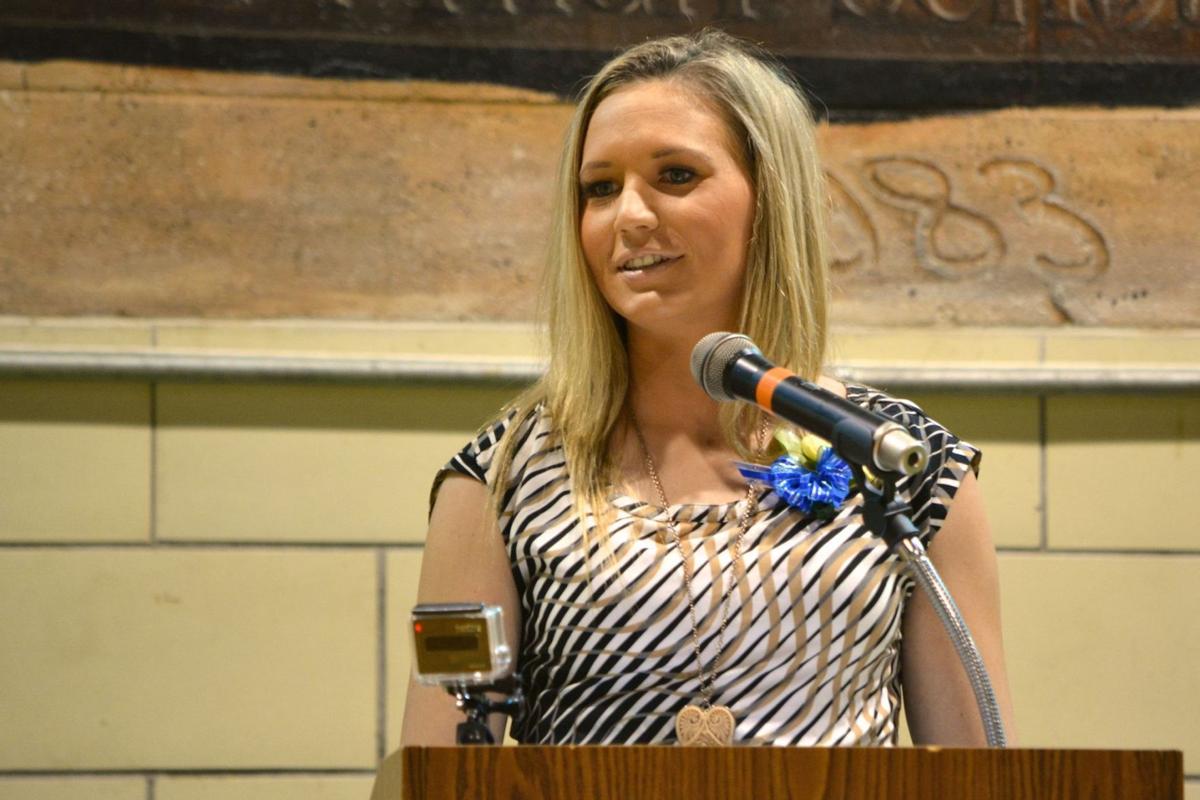 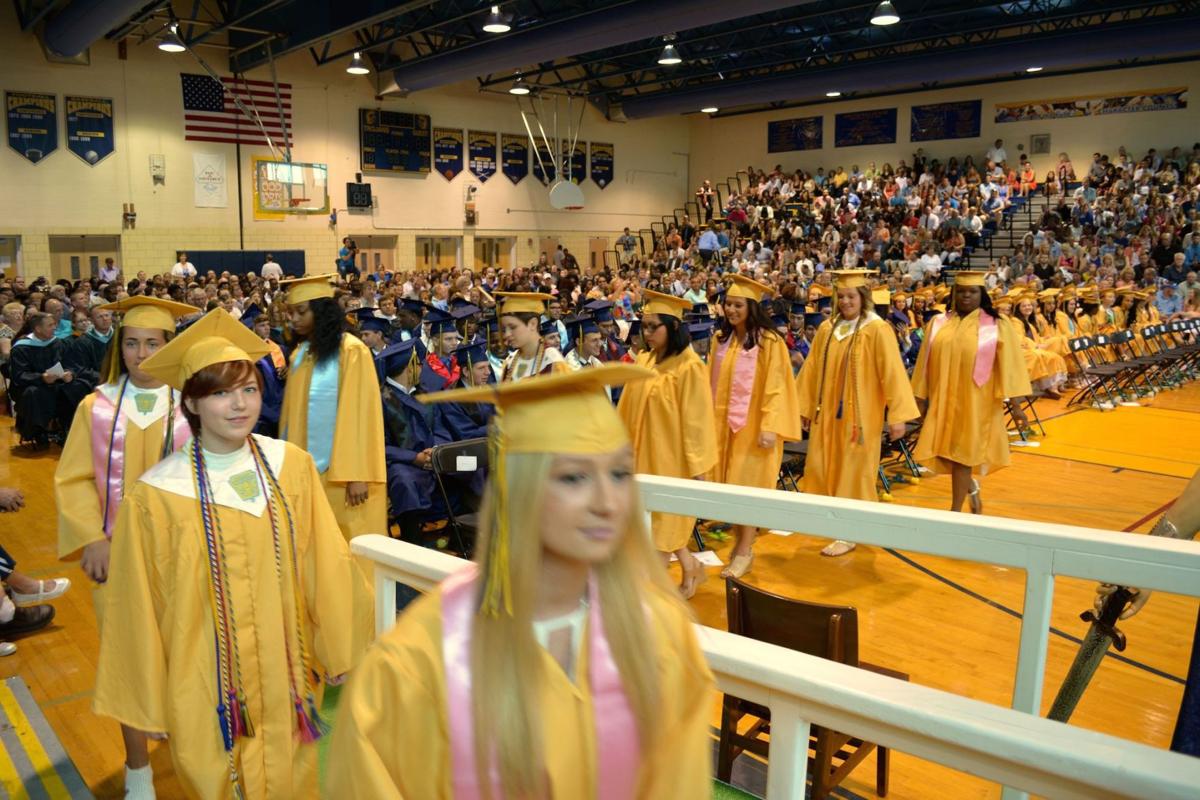 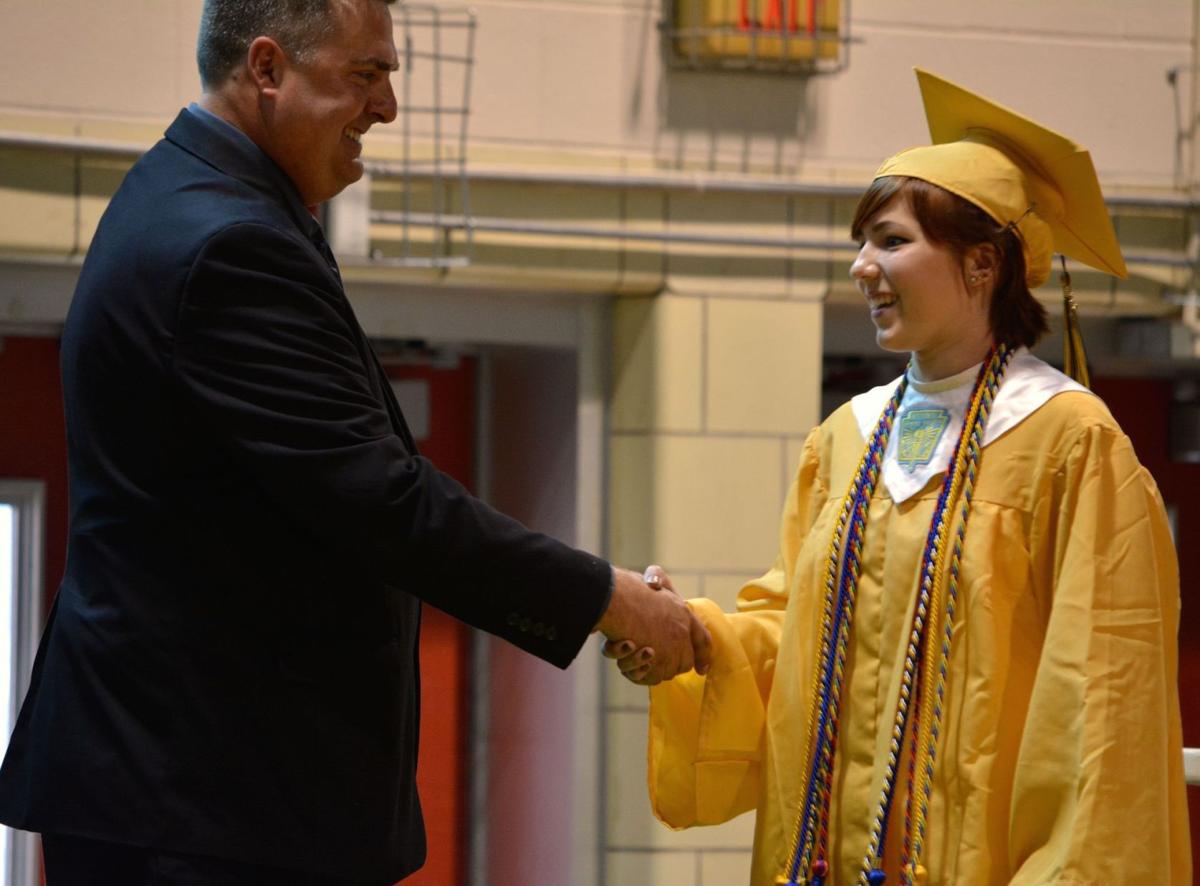 Kent County Board of Education President Jeff Reed shakes hands with senior Nina Black as she walks across the dais at graduation. 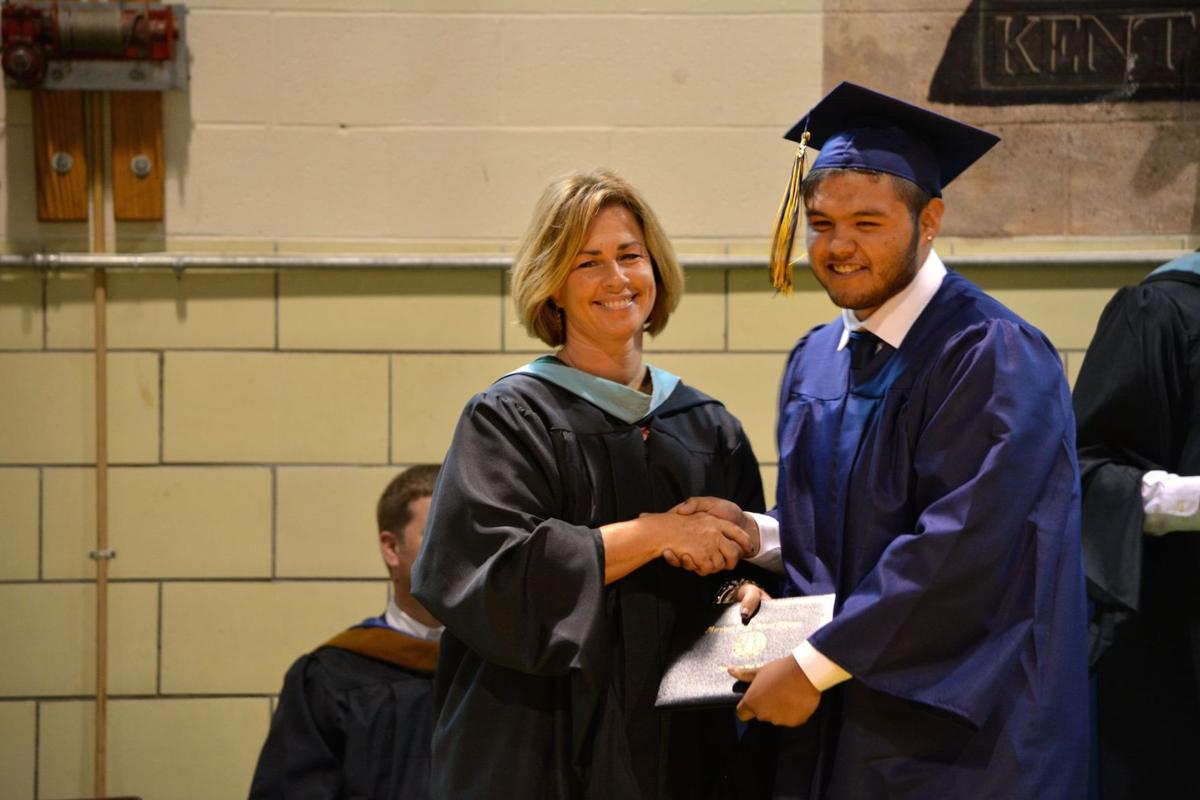 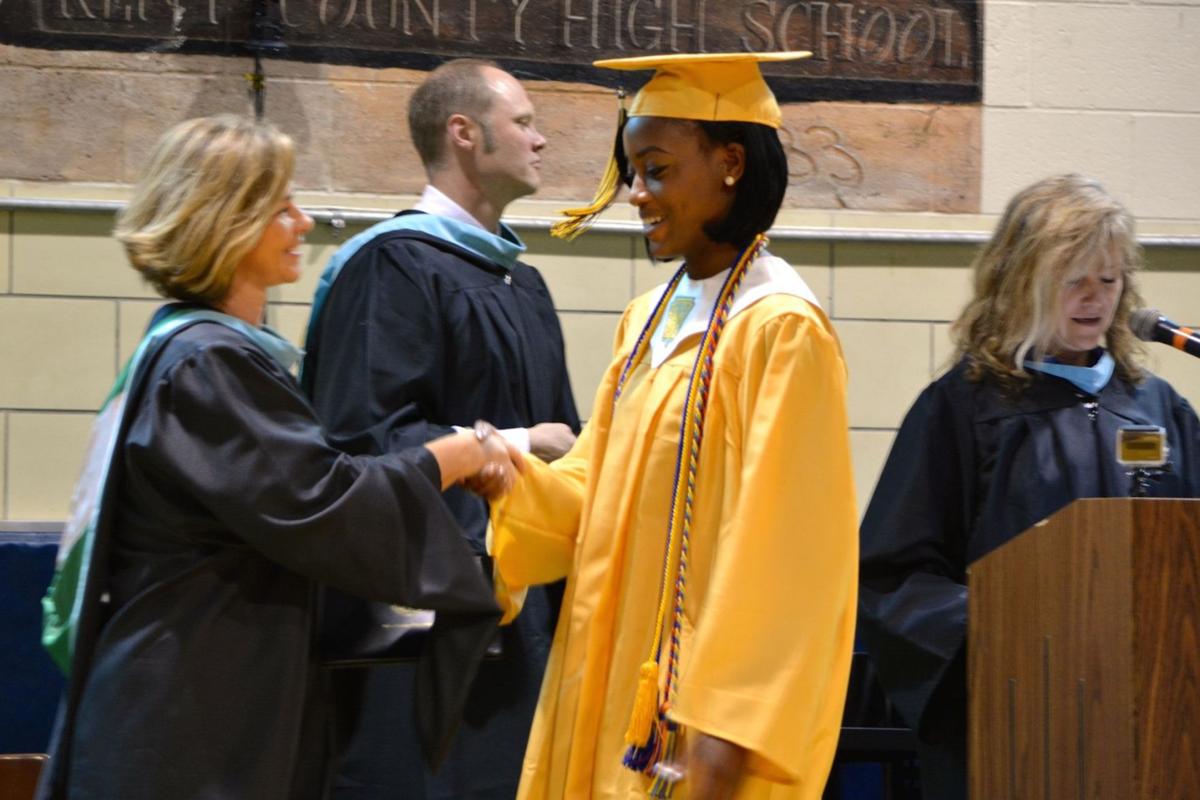 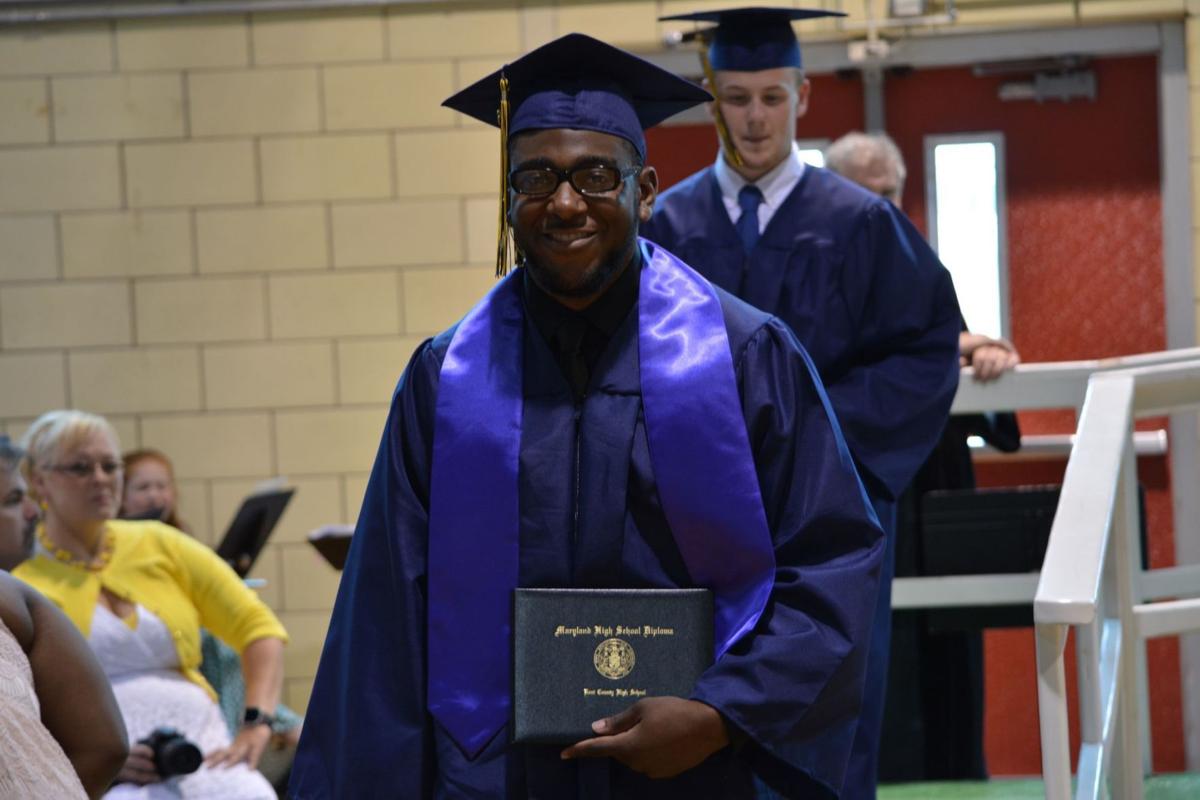 Markel Newnam and John Nicholson make their way back off the dais, having received their diplomas. 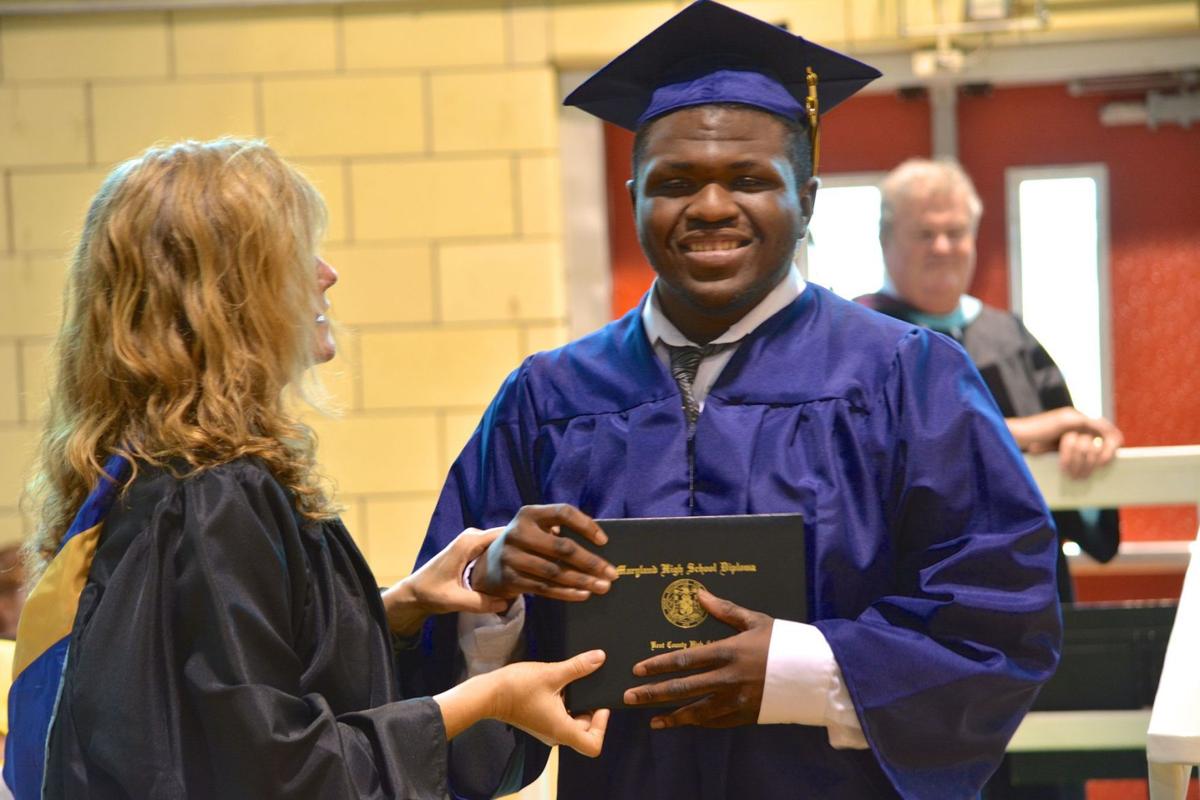 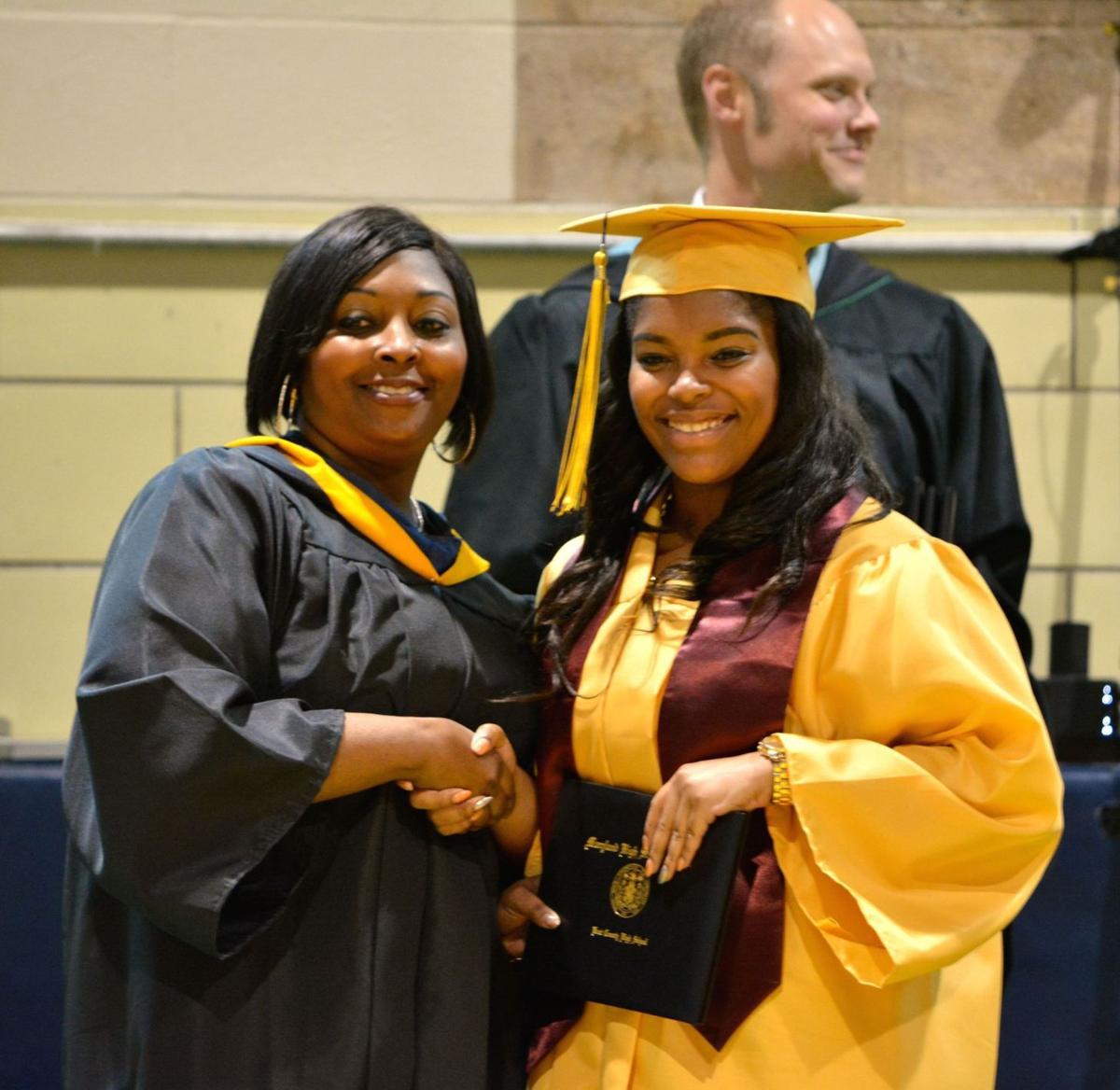 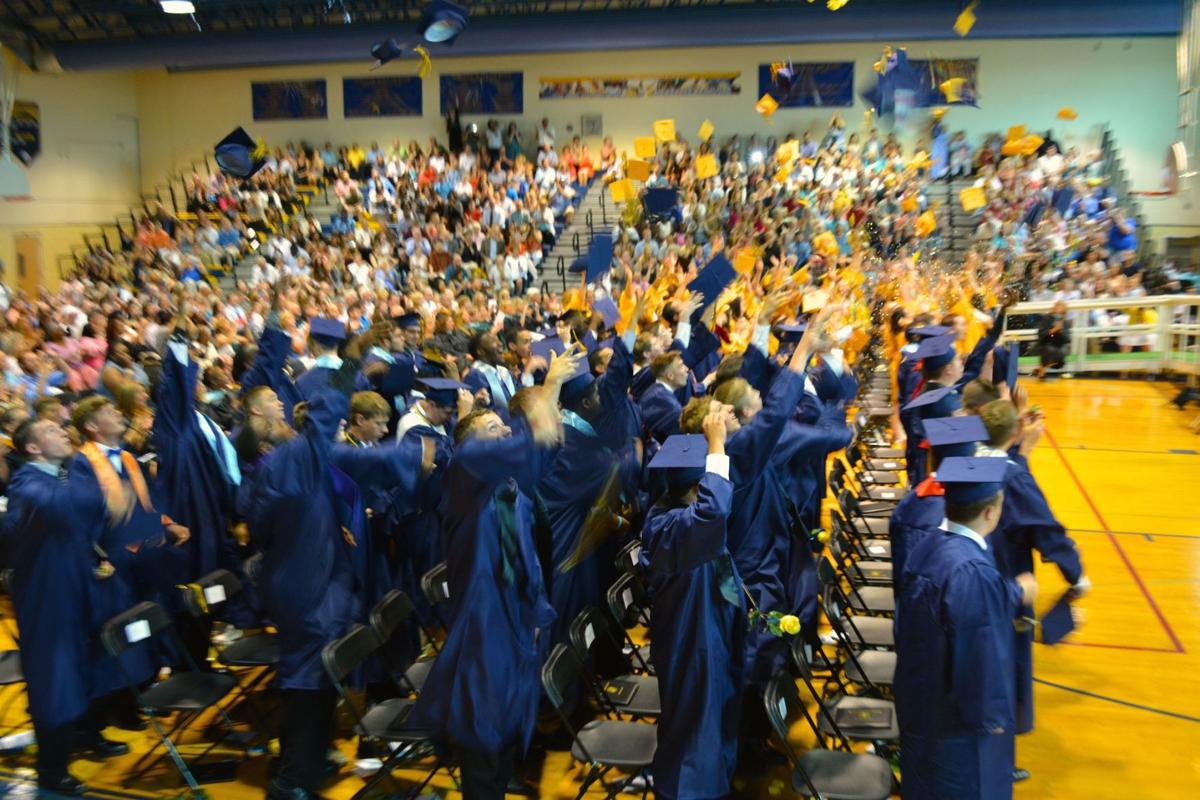 PHOTO BY DANIEL DIVILIO
1 of 11

Principal Tracey Williams lists the many accomplishments of the Class of 2016 at Kent County High School graduation Saturday, June 4.

Kent County Board of Education President Jeff Reed shakes hands with senior Nina Black as she walks across the dais at graduation.

Markel Newnam and John Nicholson make their way back off the dais, having received their diplomas.

WORTON — With about $30 million in scholarships awarded to them, the future looks bright for the 126 Kent County High School seniors who received their diplomas Saturday, June 4.

As is the annual tradition, the seniors entered Trojan Arena in pairs, exchanging roses as they took their seats. Family members and friends cheered in the stands, while school officials, board of education members and special guests applauded from the dais.

With everyone at their seats, seniors Kaitlyn Bentley, Ashley Lawton and Vanessa Rojas sang “The Star-Spangled Banner.” Molly Davis, senior class secretary, served as the mistress of ceremonies, and Jordan Perez, the class historian, introduced the platform guests.

Principal Tracey Williams recognized the Class of 2016’s accomplishments in sports and the arts, community service and academics.

Williams praised the students for having worked so hard to earn that $30 million in scholarships. She said that figure includes all scholarship money offered to students, some of whom applied to and were accepted at multiple colleges.

She said 40 percent of this year’s graduates are enrolled in a four-year college, 41 percent will attend a community college or technical school, 11 percent are committed to joining a branch of the armed forces and 8 percent plan to enter the workforce immediately.

Williams read from a selection of notes the seniors left in their yearbooks thanking the teachers and staff at KCHS. She said academics are the main focus at KCHS, but students do not learn if they do not feel safe and cared for.

“So it’s about relationships. It’s about nurturing kids and it’s about doing that every single day,” Williams said.

Racheal Nelson, senior class president, broke down the high school experience by the number of days, 720 to be exact, the seniors spent together since first walking through the door as scared freshmen.

“Throughout these four years, we have developed friendships that we will keep for the rest of our lives,” Nelson said. “We completed all the milestones that every high schooler is supposed to complete.”

Referencing last year’s hit movie “The Martian,” about an astronaut marooned on the Red Planet, salutatorian Christopher Hostetler said he believes life is all about attitude and how a person faces down the challenges he or she is presented with.

“It’s how you deal with the problems you are given that sets you apart,” he said.

He thanked the parents, teachers, administrators and staff who helped the class of 2016 over the past four years. He wished his classmates good luck with their future endeavors.

“Thanks for the memories,” Hostetler said.

Bentley, this year’s valedictorian, left notes under the seats of her classmates, offering them each a special, personalized message. She spoke about many of the little things she will miss after leaving KCHS.

She told her classmates to tolerate all they can, even when its hard. She spoke about the importance of looking past the surface and getting to know someone, of forgiveness and of trying to be more understanding, especially when conflicts arise.

“So I ask of all of you — me included — to thank someone today that you may have forgotten to thank, because this may be your last chance to do it,” she said.

Pencek majored in mathematics and economics at Washington College and is a contractor for the National Security Agency. She also was a member of the Washington Wizards dance troupe and the Redskins cheerleaders.

She spoke about the importance of being prepared in life.

“It’s very rare that you just stumble on an opportunity,” she said. “You line up the skills, you line up the tools to get that end goal, so that when the right opportunity presents itself you can jump on it.”

For her, a career-defining opportunity arose her in college. She said she was not interested in the typical career path for math majors, but a summer internship with defense contractor Northrop Grumman showed her additional opportunities to apply her skills.

She said the students will encounter challenges and obstacles along the way. What is important, she said, is how the students deal with them.

With the speeches out of the way, it was time to get down to the business of handing out diplomas. Senior class advisors Julie Anderson and Kevin Nelson took turns reading aloud the names of this year’s graduates as the students walked across the stage.

They shook hands with Kent County Board of Education President Jeff Reed and Superintendent Karen Couch. They posed for a photo with Principal Williams, herself a KCHS alum.

When the last of the diplomas was handed out, Peyton Maristch, senior class vice president, conducted the traditional turning of the class rings and tassels.

And with a final congratulations, the blue and gold mortarboards went flying through the air as members of the class of 2016 celebrated the culmination four long years of hard work.

Following the ceremony, they left Trojan Arena and KCHS not as students but as distinguished alums.