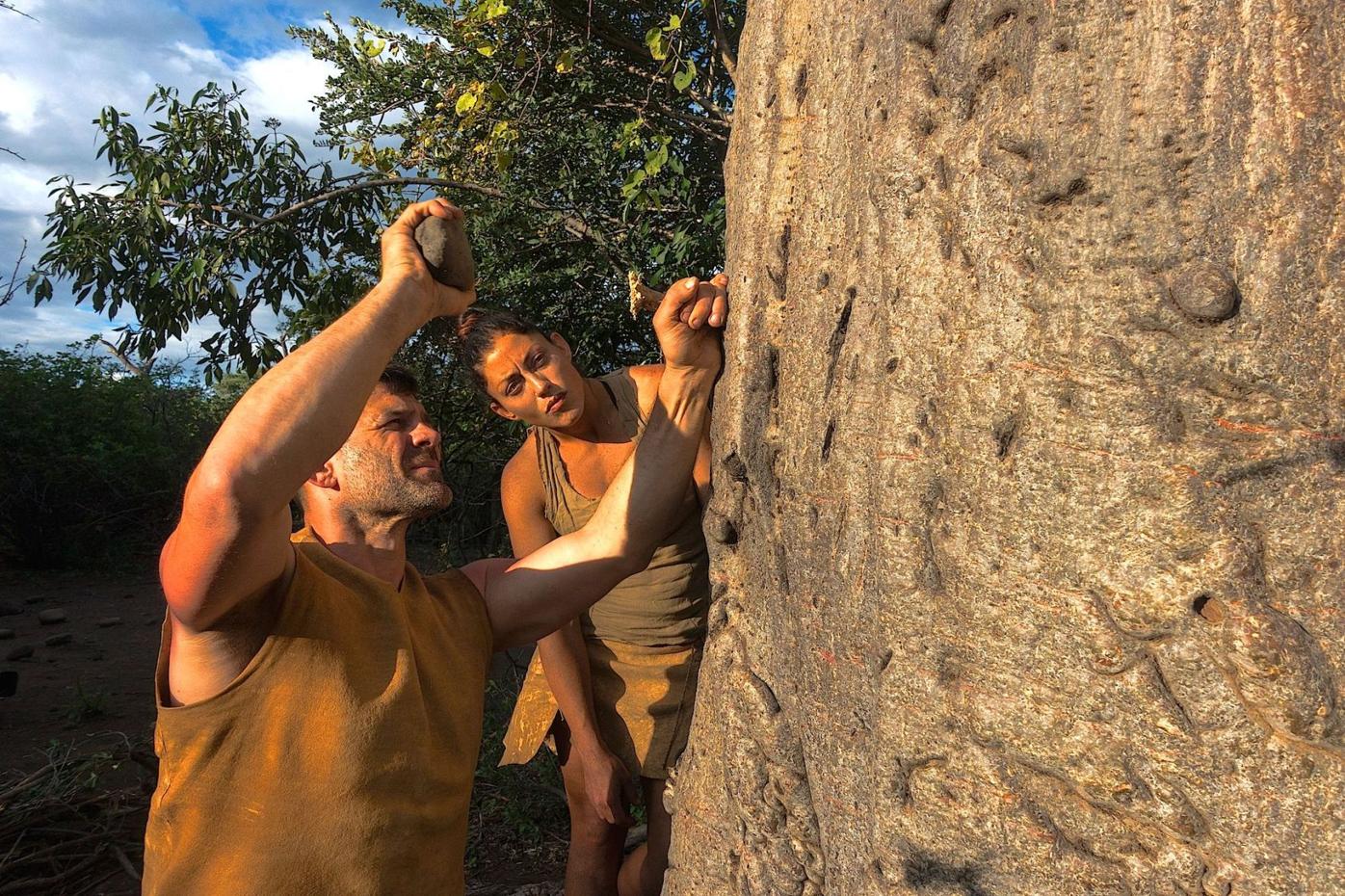 Washington College Professor Bill Schindler, left, uses a stone as a hammer while his co-host Cat Bigney looks on during a scene from “The Great Human Race.” The show premiered Feb. 1 and airs at 10 p.m. Mondays on the National Geographic Channel. 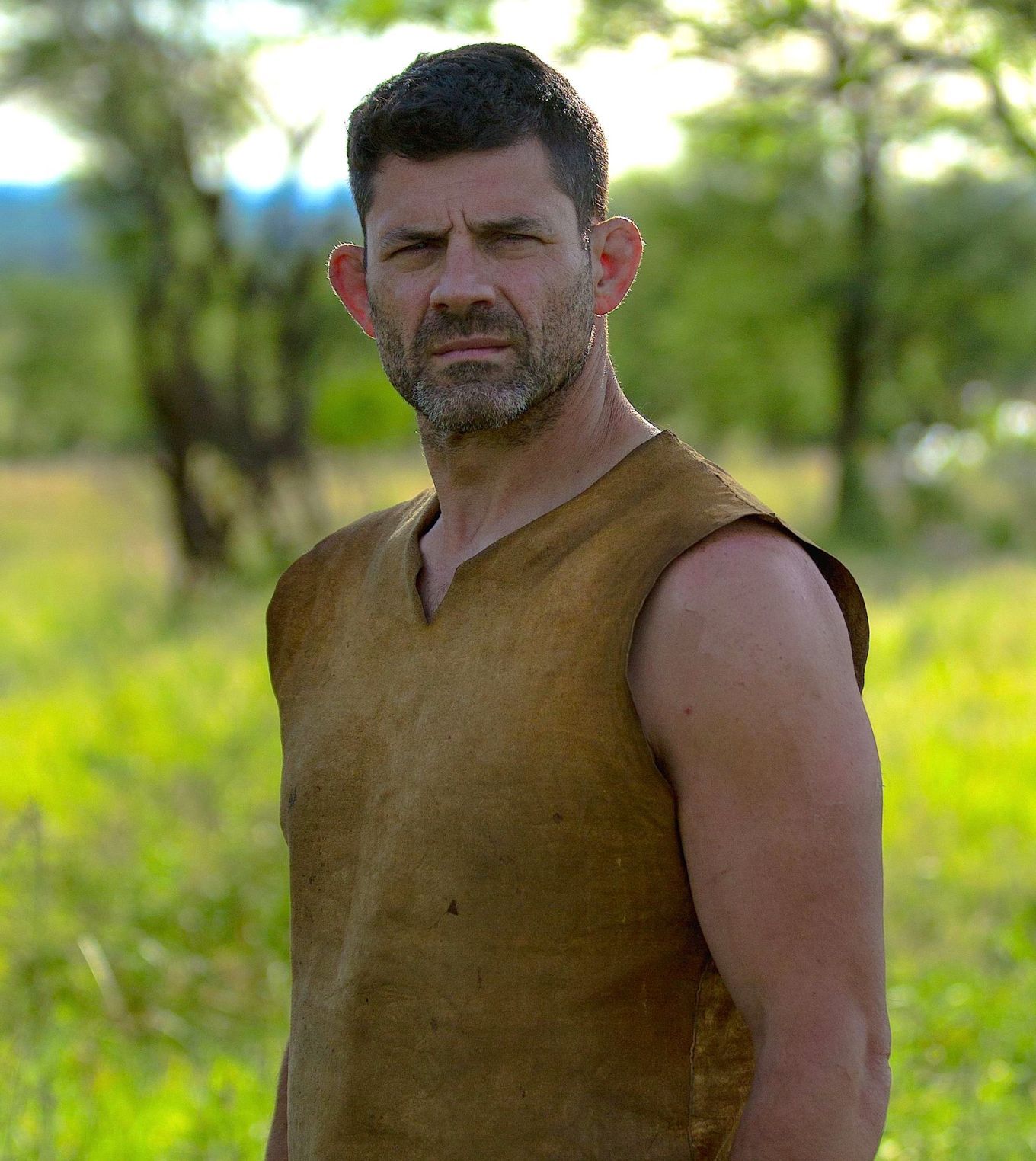 CHESTERTOWN — Applying to the field what you teach in the classroom is one thing, but doing it during harrowing experiences in the middle of nowhere on national television is another matter.

Bill Schindler, an associate professor of anthropology at Washington College, took a sabbatical last semester to be a co-host on National Geographic Channel’s “The Great Human Race.”

In a Tuesday, Feb. 2 interview, he said the network had been developing the show for a few years. He said he was contacted early last year via his LinkedIn account by a recruiting agency.

“I looked at the message and thought it wasn’t real or that a student was playing a joke on me,” Schindler said. “However, my wife said I should talk to them and so I did.”

He said that after several interviews in the North Carolina woods, he was selected due to his extensive knowledge about primitive habits, lifestyles, diets, toolmaking and more.

“I’ve spent my entire life foraging, trapping, hunting and fishing,” Schindler said. “They basically wanted a professor who gets his or her hands dirty.”

Pete DeLasho, showrunner for “The Great Human Race” and an executive producer at National Geographic Channel, said Tuesday the network did an extensive search before finding Schindler.

“It’s not often you get a guy to not only talk about evolution and make it interesting, but also knows how to make the tools needed. He’s a really rare find,” DeLasho said.

Schindler said the show was then fleshed out over several months, to find its exact purpose.

“We didn’t want it to be a wilderness survival show or documentary,” Schindler said. “We wanted it be authentic, have a message and be as real as it can be.”

He said “The Great Human Race” is the “story of all of us,” meaning it retraces the migrating journey humanity’s ancestors took, which began more than 2 million years ago and across different continents.

From last May to November, Schindler and his co-host, Cat Bigney, a survival and primitive skills instructor from Colorado, were dropped into remote areas around the globe, using only their knowledge of primitive survival methods and reliance on each other to endure the conditions.

“The slots were for a male and a female, to represent the human race,” he said. “We also used our experiences and boiled it down to accessible information for interviews with the cameras.”

Schindler said one of the show’s draws is a restriction placed on the hosts in each episode. They must adhere to the rules of a certain point in our ancestors’ journey and use only the resources found in the chosen timeline.

An example is the first episode, which takes place in Tanzania. To carry on, Schindler and Bigney had to use the simple stone instruments mankind did when tools were first invented to hunt, create shelter and protect themselves.

“Each episode is in another location, with the tools and accessibility changing to fit the time we’re representing,” Schindler said. “We won’t make fire until episode two.”

He said though National Geographic Channel wasn’t irresponsible, nothing in the show was simulated.

“Things were so intense that the cameras just seemed to disappear while we were filming,” Schindler said. “I was starved, dehydrated, facing wild animals, you name it.”

Schindler said one such encounter occurred in the first episode, while the hosts were walking through chest-high grass on the savannah in Tanzania. He let his guard down through a knee-high section when, suddenly, a lion rose up before him.

“It was literally two leaps away and stared directly into my eyes,” Schindler said.

He said he followed safety procedures and stood his ground while simulataneously making himself appear larger. After a few intense moments, the lion went away.

“It was like being in a fight, where you think it lasted forever but really was only seconds,” Schindler said. “My legs were shaking even after it went away. I still haven’t really processed it yet.”

He said to him, the show’s message is about the shared heritage of the human species, regardless of race or ethincity, and how everyone’s ancestors have the same origins.

“Through our experiences in each episode, we’re celebrating the similarities all of us have that come from the ancient past,” Schindler said.

He said an underlying messages is the relationship evolution and dietary needs have with one another, as in “what we have access to versus what we can eat.” Another message is the effect technology truly has on human life.

“Biologically, humans are the weakest of animals. We don’t have claws and our teeth are inferior,” Schindler said. “What we do have is our brains, and that lets us invent things and helps us interact with the environment.”

He said he never imagined he would ever be on television and the fact that he appears on National Geographic Channel is an added bonus.

“The channel is reputable and it’s something I grew up with, which fed my passion,” he said. “To be on TV and have the purpose to teach what I love ... I don’t even think I’ve processed it yet.”

Schindler said the show also allowed him to traverse the globe for the first time ever, and visited countries like Tanzania, Georgia and Mongolia, which he deemed the perfect family vacation spot.

Schindler and his wife, Christina, live in Church Hill, along with their children Brianna, Billy and Alyssa. He said having to be away from his family for most of last year and at such distances was hard.

“However, my kids think it’s pretty cool their father’s on TV,” he said.

Schindler said he enjoyed working on the show and that the crew was amazing. He said working alongside Bigney was “a true education,” given their different backgrounds.

“We were two different people who came together for the purpose of problem-solving,” he said. “We definitely had to rely on one another to get through all of it.”

DeLasho said working alongisde Schindler was fantastic and that he “found himself listening to him talk all day long about evolution.”

“He taught me a lot and it was like a graduate course in archaeology,” he said. “He was very easy to get along with and truly put his time in.”

Washington College held a special public viewing of “Dawn” Saturday, Jan. 30, which Schindler and DeLasho attended and said a few words about the experience.

Emily Chamlee-Wright, the college’s provost and dean, said Tuesday the viewing was a huge success and that it was a packed house. She said the college was proud that Schindler is not only on television, but also that he’s teaching what he’s passionate about.

“He’s approached this project and dived in because it will enhance his journey as a teacher and a scholar,” she said. “He’s doing this because he has the primitive background and knowledge. Not many people on the planet have that full array of skills.”

Schindler said this season of “The Great Human Race” is 10 episodes long. The next episode, “Fire,” takes place in the jungles of Uganda and follows the journey of Homo erectus.

“I’m immensely proud of this project and everyone that’s worked on it,” he said. “It’s a great feeling to have.”

“The Great Human Race” airs at 10 p.m. Mondays on the National Geographic Channel.