Cambridge-South Dorchester’s Nathaniel Lowe and Brandon Tibbs celebrate in the air along with Michael Richardson after the Vikings upset top-seeded Colonel Richardson Monday, May 16. 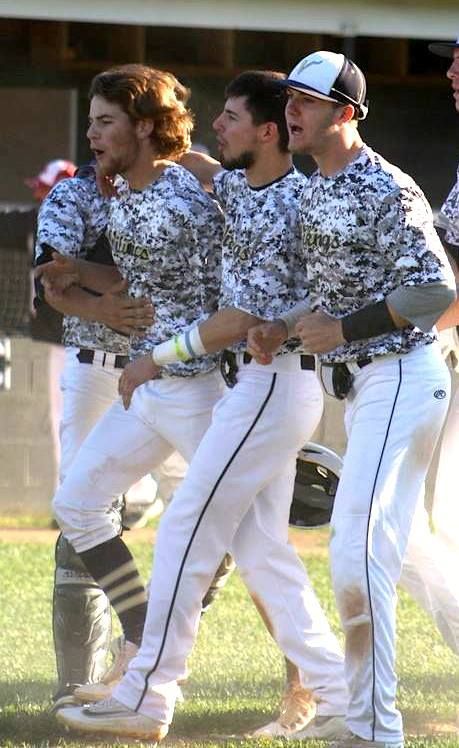 Cambridge-South Dorchester’s Nathaniel Lowe and Brandon Tibbs celebrate in the air along with Michael Richardson after the Vikings upset top-seeded Colonel Richardson Monday, May 16.

The Vikings scored one run in the first, when Michael Richardson doubled, and Evan Fishpaw singled him home.

Devin Sparks made it 3-0 with a two-run hit in the top of the third.

The Colonels rallied to tie the game in the bottom of the seventh. Shawne Bowens and Jacob Hicks each walked. Jaret Bennett scored Bowens with a base hit, and Jake Zebron’s double scored Hicks and Bennett to tie the game.

But the Vikings’ Tyler Harding reached on a bunt single in the top of the eighth, and eventually scoring on three infield errors.

No. 1 seed Colonel finished 18-2. Zebron took the loss for Colonel.

Josh Townsend (2-0) picked up his second decision in as many postseason appearances, with two innings of work in relief of Harding, who allowed two hits in a no-decision as the C-SD starter.

The Vikings visit No. 2 St. Michaels on Wednesday at 4 p.m. for the sectional title.