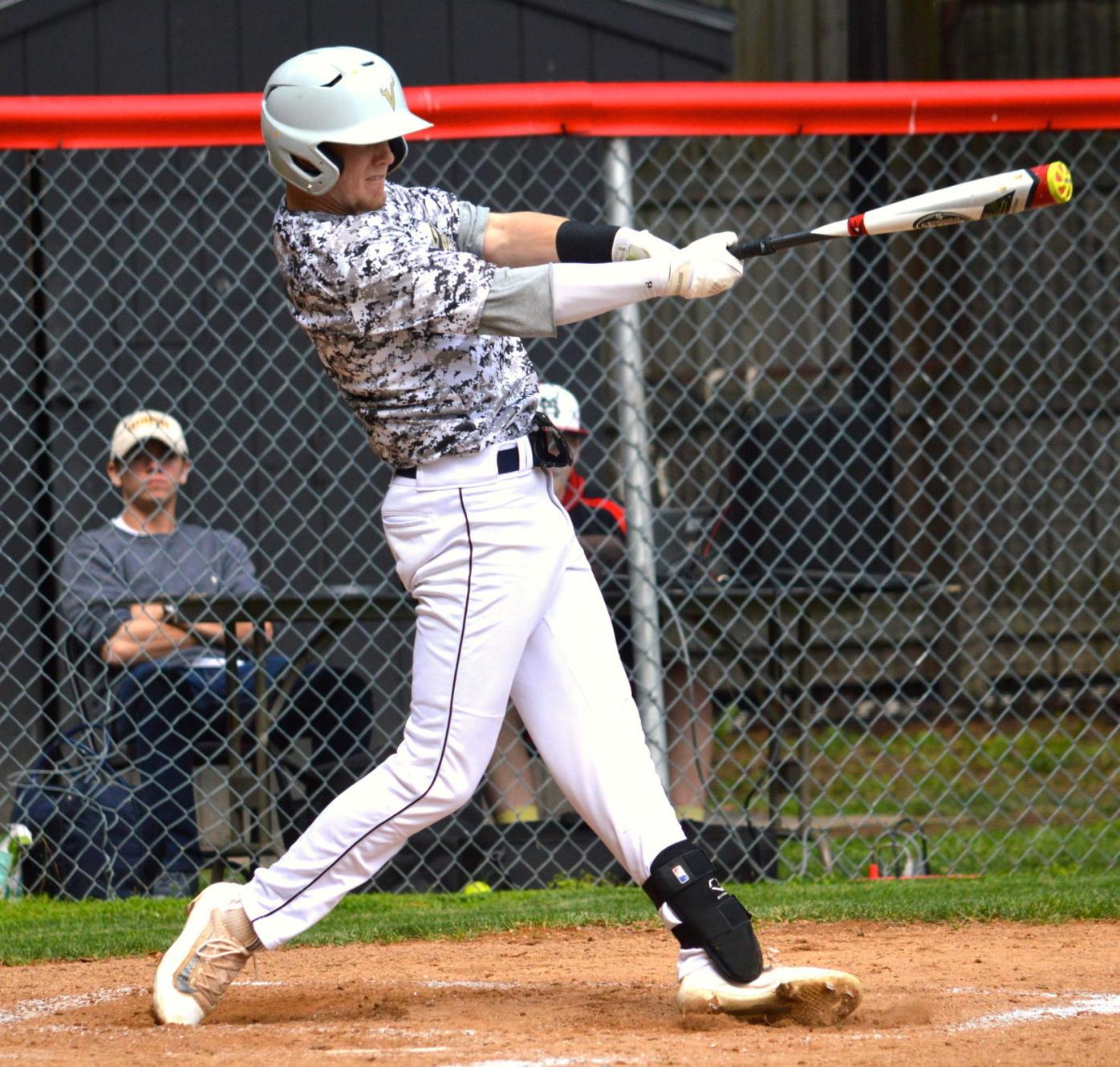 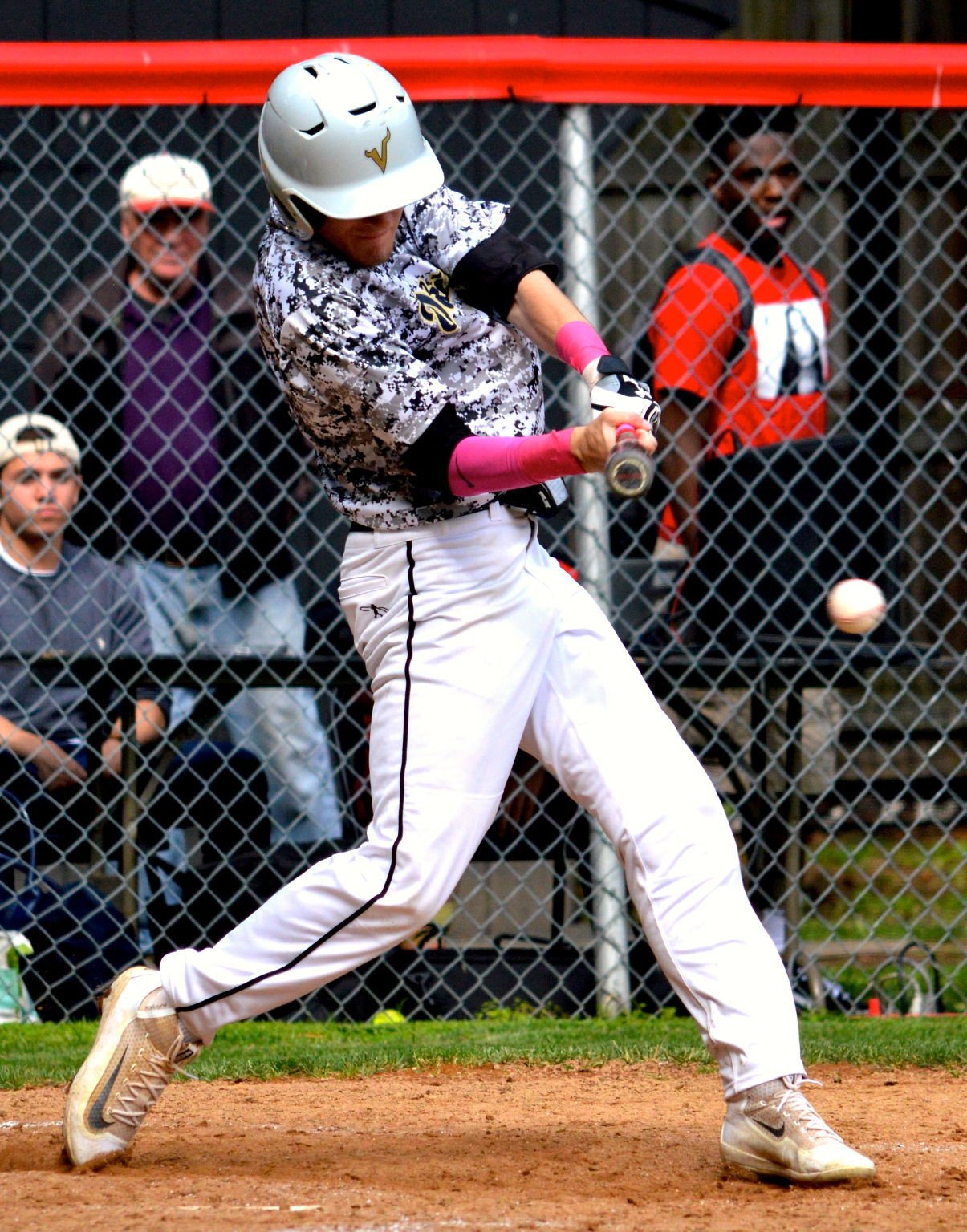 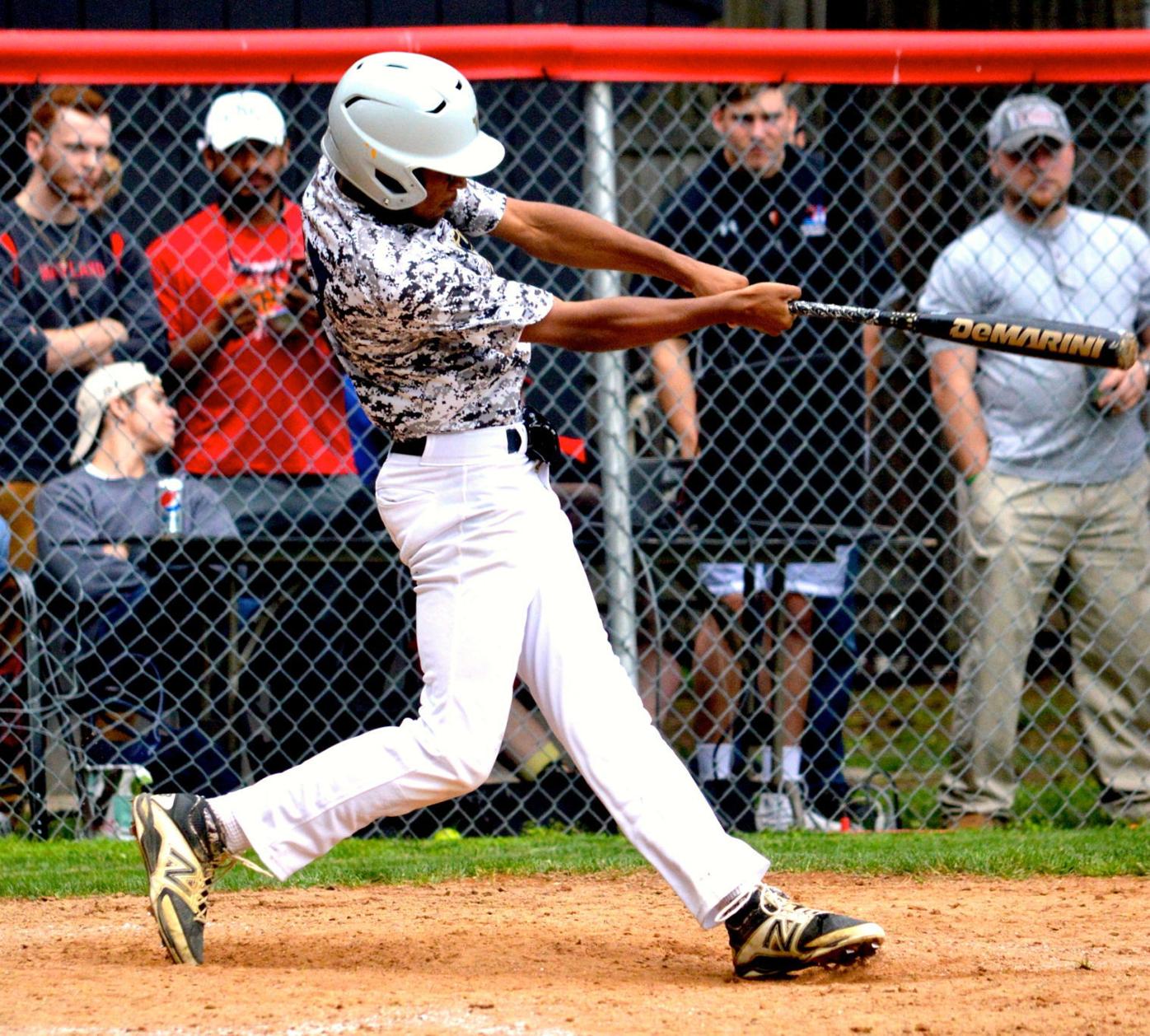 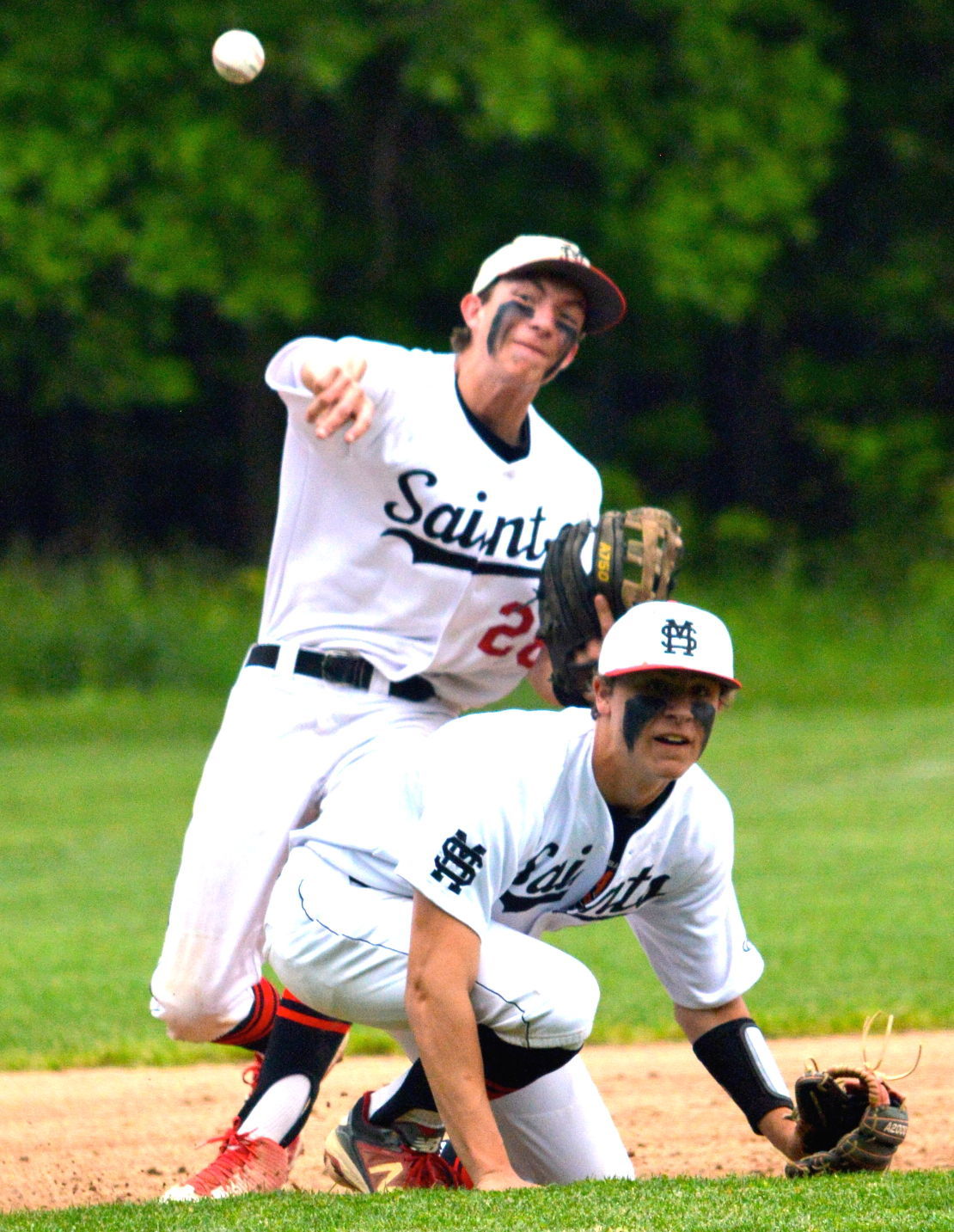 St. Michaels' Andrew Risher throws to first for an out over a ducking Nathan Howeth in a 7-4 victory over Cambridge-South Dorchester on Wednesday. 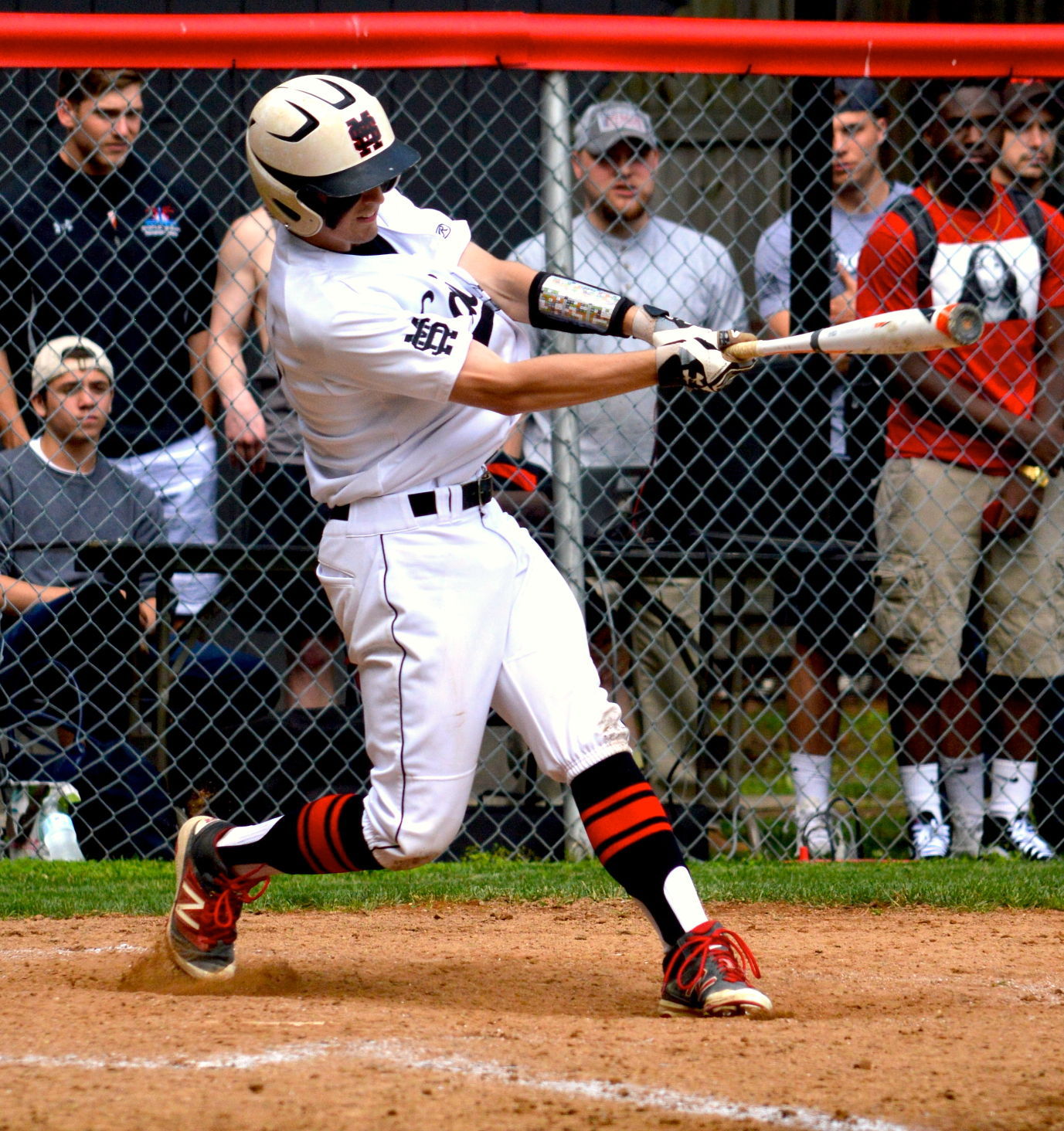 St. Michaels’ Matt Grogan rips an RBI single to left in a 7-4 victory Wednesday against Cambridge-SD. 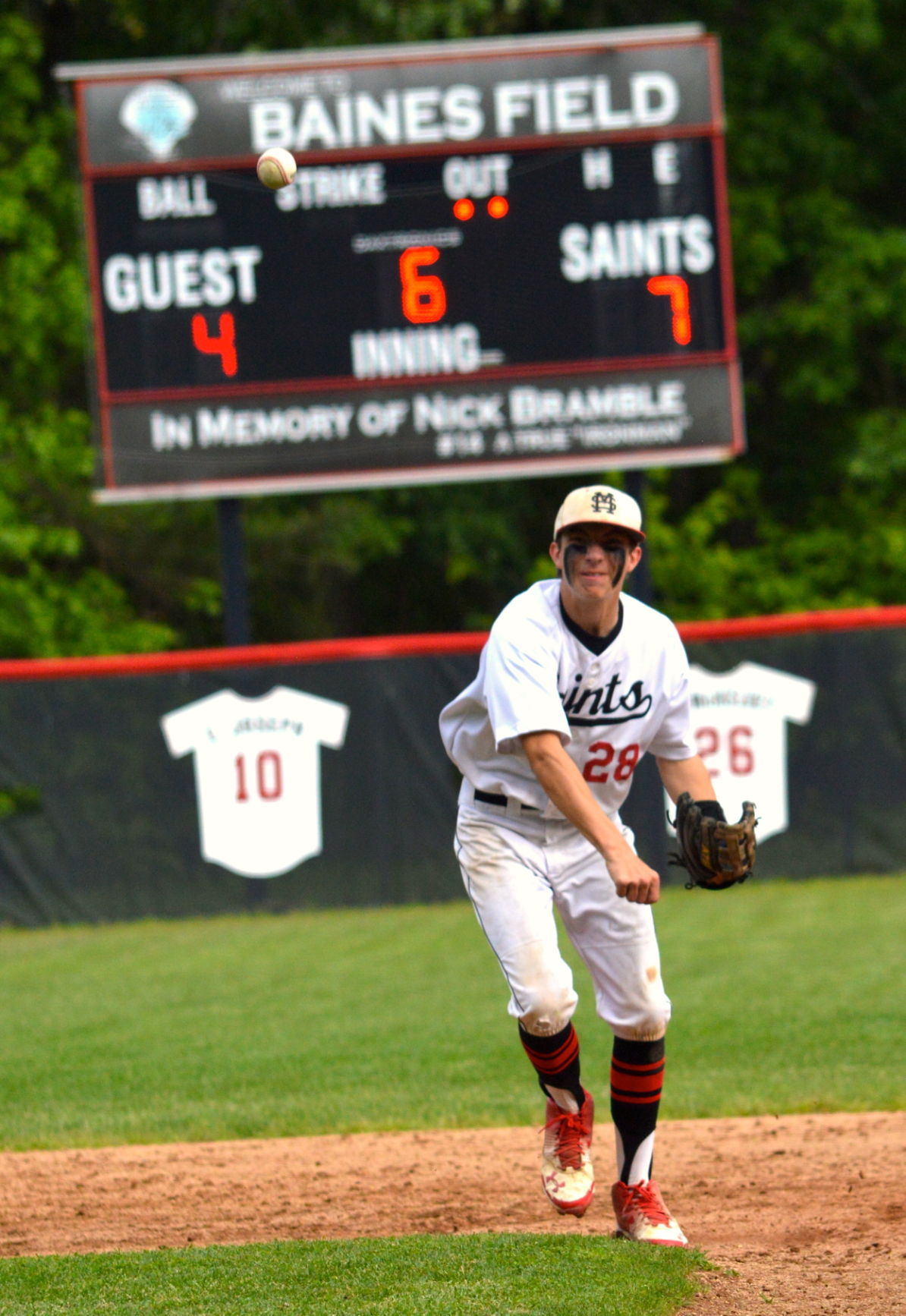 St. Michaels' Andrew Risher fires to first for an out in a 7-4 victory over Cambridge-South Dorchester Wednesday, May 18. 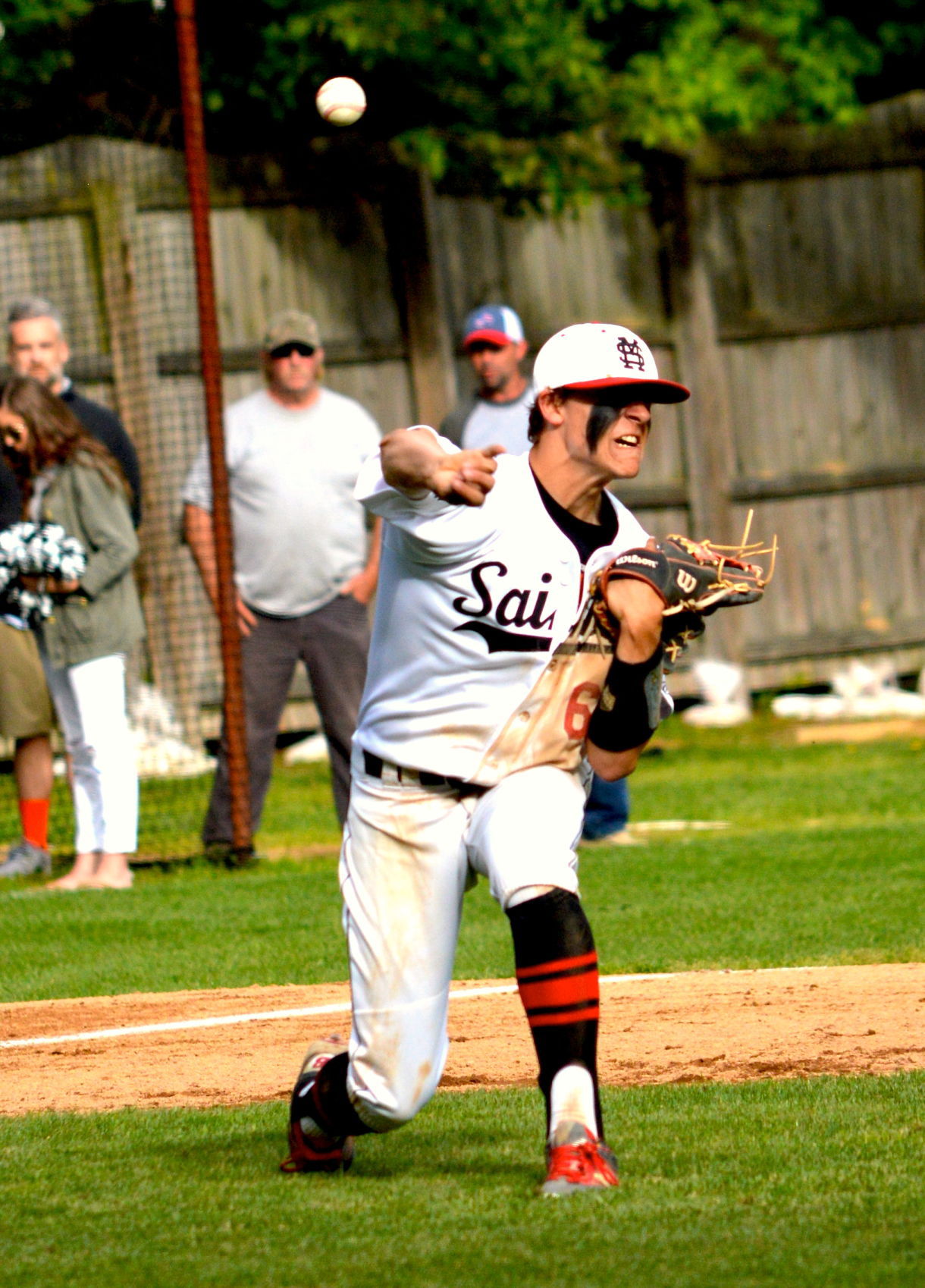 St. Michaels' Nathan Howeth to first for an out in a 7-4 victory over Cambridge-South Dorchester Wednesday, May 18.

St. Michaels' Noah Brack rips an RBI single to right in a 7-4 victory over Cambridge-South Dorchester Wednesday, May 18.

PHOTO BY DUSTIN HOLT
1 of 7

St. Michaels' Andrew Risher throws to first for an out over a ducking Nathan Howeth in a 7-4 victory over Cambridge-South Dorchester on Wednesday.

St. Michaels’ Matt Grogan rips an RBI single to left in a 7-4 victory Wednesday against Cambridge-SD.

St. Michaels' Andrew Risher fires to first for an out in a 7-4 victory over Cambridge-South Dorchester Wednesday, May 18.

St. Michaels' Nathan Howeth to first for an out in a 7-4 victory over Cambridge-South Dorchester Wednesday, May 18.

ST. MICHAELS — In a postseason that saw four big upsets on Monday alone, Brian Femi was wary of Wednesday’s Class 1A East Section I championship against Cambridge-South Dorchester.

“Yes, we did beat them twice during the season,” the longtime St. Michaels High baseball coach said. “But I’ve said it all year, they have the best-hitting lineup in the whole conference. They’re extremely dangerous 1 to 5, and the rest of the lineup can hit, too. You saw that today.”

The Vikings, having just toppled powerhouse Colonel Richardson in an extra-inning section semifinal on Monday — their first win in that rivalry in three years — were also hungry for some payback after those two regular-season defeats, the most recent one a 20-3 drubbing at home.

“Nobody, really, nobody outside our own dugout gave us any chance at all of getting to this point,” first-year C-SD head coach Chad Wolfe said. “But the guys, they came on. It really speaks to their hearts as players, as teammates, really, that they put together what they have in the last couple of games to get here.”

The Saints (18-2), figured by pundits after Colonel’s loss to the Vikings (7-13) on Monday as heirs-apparent to the region crown, found the “much-improved” Vikings had come to play, pulling ahead 2-0 through two innings, while the Saints had no hits to that point.

But then the Saints got their bats going, to take a 3-2 lead in the third, padding it with four more in the bottom of the fourth en route to a 7-4 win.

The triumph puts the Saints in their first region final in three years, against Section II champ Washington, 4 p.m. Friday at Baines Field.

Matt Grogan (2-0) pitched a complete game to pick up the win, striking out three. He also had the hit that put his team ahead for good, an RBI single in the third that scored Andrew Risher to break a 2-2 tie.

But the Vikings came out ready for him.

Michael Richardson began the game by clouting Grogan’s first pitch deep to center field for a leadoff double. Evan Fishpaw sacrificed him to third, and Tyler Harding tried another bunt, a safety squeeze. But the ball went right back to Grogan, who retired Harding with a throw to Noah Brack at first. Richardson held on the play, and was stranded at third when the next hitter, Nathaniel Lowe, struck out on a 2-2 Grogan fastball.

“The squeezes in this game were huge,” Femi said. “I think maybe their signal was if it’s hit back to the mound, the squeeze was off, and that’s how it happened both times. ... Those runs were huge. If they score those, it’s a one-run game in the seventh, and you approach everything differently.”

C-SD got two runs in the next inning, though.

Devin Sparks doubled to start the rally; Matt Elliott (2 for 3) singled to move him to third. Brandon Tibbs beat out an infield single to score Sparks and Elliott eventually came home on a Brad Stanton RBI grounder to second.

“Josh only pitched two innings all year,” Wolfe said. “He’s supposed to be our starting catcher next year [replacing senior Koby Schreiber], but the way he pitches, we might have him there too.”

Walking two in the first with one out, Townsend got out of trouble with a strikeout and fly ball out to center field. Townsend hit Grogan with a pitch with one out in the second, but Grogan was forced at second, and no Saints rally developed in the inning.

It came in the third, however.

Heinlein doubled to left field on the next pitch, a blooper that Richardson chased and dove at, barely missing it. Seth Parks was hit by a pitch, and Nathan Howeth grounded into a double play, as Heinlein ran to third.

C.J. Chansler chopped one deep to short, and the ball, in time to get him, was out of the reach of first baseman Stanton, sailing out of play. The two-base error scored Heinlein and made it 2-1, keeping the inning alive.

A pitch hit Andrew Risher a moment later, and Noah Brack followed with a base hit to right that scored Chansler and tied it at 2-2. Grogan followed suit with an RBI single, bringing Risher in to make it 3-2 in favor of the home team.

“I felt like we had it then,” Risher said. “With Matt on the mound, and the defense, I figured we could do it from there.”

A walk to Saints No. 9 hitter Trent Saunders began the game’s biggest inning, the home half of the fourth. Then the small-ball began.

Heinlein laid down a bunt to the left side that lingered just long enough on the grass to allow him to make it safely to first. Parks followed with a nearly identical bunt, beating that out for a hit as well, to load the bases.

Nathan Howeth slapped a single to left field, and Saunders and Heinlein scored. Parks made third and Howeth second on the throw to the plate, which came in a split-second too late to get Heinlein.

Fishpaw relieved Townsend (2-1) at that point; a wild pitch scored Parks, and a Chansler squeeze bunt brought Howeth in.

Fishpaw retired the next two Saint hitters to squelch the rally, but the Vikings now found themselves in a 7-2 hole after leading 2-0 two innings earlier.

They responded, though. Richardson’s infield single began the guests’ half of the fifth. He then stole second on a pickoff, and reach third on a Fishpaw ground out to the right side. Harding’s ground out scored him to make it 7-3.

Lowe hustled out an infield hit a moment later, and Sparks followed with his second double of the day, scoring Lowe from first to make it 7-4.

But Grogan stopped the C-SD spurt there, grounding Elliott out to third for the final out.

C-SD got its final spark in the top of the seventh. Richardson, grounding to short, was called out on a bang-bang play at first; after a quick conference by the umpires, though, the call was reversed, and Richardson was called safe at first.

Any controversy the reversal might have caused lasted less than 60 seconds, though, as the next hitter grounded into a 6-4-3 double play. The batter after that, likewise, was retired on a ground ball, ending the game.

“We’ve played small-ball all year,” Femi said. “We’ve had a couple of games where we scored a lot of runs, but we’re not the kind of team that scores a lot in every game. We have to make things happen, make the defense make plays. And today, the kids executed. ... We bunt a lot in practice. It’s good to see they can do it in game situations.”

“We finished the season well,” Wolfe said. “We beat Easton, a good ball club. We beat Mardela, also a good ball club. ... Then with the playoff wins against North Dorchester [on Saturday] and Colonel Monday, I think we went out well.

“It shows that these kids knew what they had to do, and could come out here and put together a game,” Wolfe added. “You lose to somebody 20-3, it’s easy to just say ‘forget it,’ and give in. But they didn’t. They battled.”

“I think Cambridge, really, is much improved over where they were even a couple of weeks ago,” Femi added. “They put it all together as the season went on. They gave us a game.”