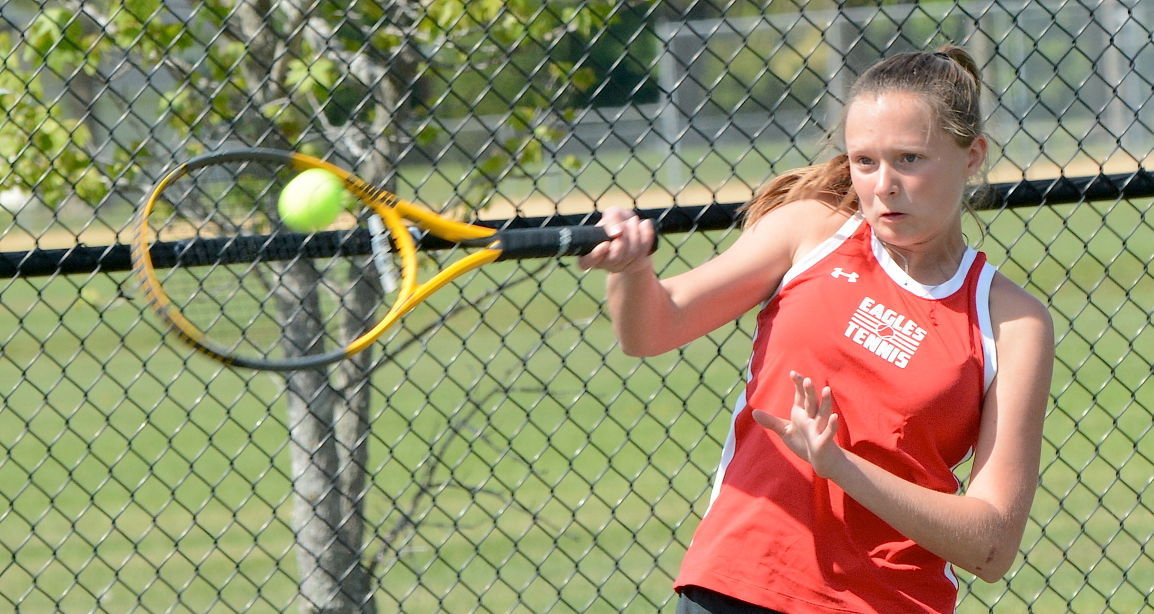 North Dorchester’s Kathryn Allen follows through on a forehand during Friday’s girls’ doubles final at the District VIII tennis championships.

North Dorchester’s Kathryn Allen, right, comes to the net for a return while twin sister Karlie watches from the baseline during Friday’s girls’ doubles final at the District VIII tennis championships.

PHOTOs BY WILLIAM HAUFE
1 of 2

North Dorchester’s Kathryn Allen follows through on a forehand during Friday’s girls’ doubles final at the District VIII tennis championships.

CAMBRIDGE — The fourth-seeded tandem of twin sisters, Kathryn and Karlie Allen of North Dorchester, earned a state doubles berth by reaching the finals of the District VIII championships at Glasgow Courts Friday, May 20.

The Allens fell 7-5, 6-1 in the final to second-seeded team of Ella Joshi and Carly Palmer, giving Easton its fourth-straight girls’ doubles title in districts.

They are both stronger than a year ago, and their offseason play has put them ahead of their Bayside Conference competition.

But Kent Island High’s Catrina Coyner and Kent County’s Ryan Santmyer are hoping their consistency is what helps them make a deep run at next weekend’s annual state tennis championships at the Olney Manor Park Tennis Courts.

The two unbeaten sophomores continued their dominating play Friday during the District VIII championships at Glasgow Courts. Top-seeded Coyner dropped just one game in four matches over the two-day tournament, that coming in the girls’ singles final, where she defeated Easton’s Ina Lucero, 6-1, 6-0 for her second straight district title. Santmyer was also seeded No. 1, and almost as impressive, losing only two games in three matches, the last a 6-0, 6-1 victory over Parkside’s unbeaten Conner Houtman in the boys’ singles championship.

“Even though I didn’t show it in my last match, I’m much more consistent than I was last year,” said Coyner, who improved to 16-0, and extended Kent Island’s girls’ singles title string to five — Kristi Wong winning the first three from 2012-14. “I’m much more solid on everything all around; so my serves, my groundstrokes, my volleys, my slices. And my strategy has definitely gotten much better.”

“I feel very confident; better than last year,” said Coyner, who earned District VIII’s lone singles victory at last year’s state tournament. “I think that as long as I’m consistent, and I play the best that I can, I think I’ll do well.”

“Last year I think one of the major problems in my game was consistency,” said Santmyer, who lost to James M. Bennett’s Matt Ryan in last season’s boys’ singles final. “I had the power but not any consistency. And then this year I’ve really built that consistency up so I can stay in points longer and wait for my opportunities.”

When Ryan, the three-time defending district singles champion decided not to play this year at Bennett, Santmyer had the opportunity to become the conference’s most dominating boys’ player, which he proved to be on Friday.

Patiently playing from the baseline, where he seemingly returned everything hit his way, the second-seeded Houtman (16-1) defeated Easton freshman Lucas Joshi, 6-2, 6-3 in Friday’s semifinal. After about an hour’s break, Houtman played Santmyer (19-0), but couldn’t answer his power and consistency.

“I think he just came out, trying to play a little bit more for the fun of it, because it’s more fun when both players are playing instead of just hitting it back and forth,” Santmyer said of Houtman.

“Last year in the second half of the season, I felt like I slipped a little bit,” said Santmyer, who was undefeated during the regular season before losing in the district final and his first-round match at states. “But this year I remembered that and just focused on the goal of being (district) champ. So I kept my focus all throughout.”

While Coyner and Santmyer were on their respective championship runs, Easton won the team championship, 18-16, over J.M. Bennett, advancing to the finals in girls’ singles (Lucero), girls’ and boys’ doubles, and the boys’ singles semifinals. Lucas Joshi defeated Bennett’s Brock Forsythe in the consolation round.

“Our team all year long has been built on depth,” said Easton assistant coach Grant Mayhew, who watched the Warriors win their first boys’ conference title since 1982 this season, while the girls’ Bayside title streak ended at four. “We have a nice mix; a few seniors, and they showed leadership this year, and then we have a bunch of youngsters, who even the ones that lost yesterday (Thursday) came out and they were excited to see what it was all about. Coach (Dick) Kemp has been doing this forever now and the girls have always been great. And now we’re starting to get some guys to come around and as a whole team, boys and girls, really trying to build a program now.”

For a fourth straight season, Easton won the girls’ doubles title as the second-seeded team of Ella Joshi and Carly Palmer defeated the fourth-seeded tandem of twin sisters, Kathryn and Karlie Allen of North Dorchester, 7-5, 6-1 in the final.

“It was pretty difficult,” Ella Joshi said of making the transition from playing singles during the regular season to doubles districts. “We’re so used to playing singles and then when we started practicing we have to work out the kinks. But then we felt pretty confident going into this that we became a solid doubles team.”

Palmer agreed, and said after pulling out a tough first set against the Allens, her and Joshi felt a weight had been lifted.

“We struggled a bit in the beginning but we got it back and we felt pretty confident second set,” Palmer said. “We felt like we could relax and let our strokes be confident, and it work out pretty well obviously. It took a few games, maybe three, but we found our rhythm. We’ve known each other our whole lives and it worked out very well.”

“We were really excited to play in front of her,” Palmer said of Claggett. “She said that she’s really proud of us.”

Seeded second, Easton’s boys’ doubles team of Devin Williams and Luca Tondin advanced to the finals, where they lost to Bennett’s top-seeded team of Luke Murphy and Ryan Wooten, 6-3, 6-2.

“I wasn’t that challenging,” said Allewalt, the Bucs’ No. 1 boys’ singles player, of transitioning to doubles. “I had all the basic strokes that we both did and we were just able to put it together. We both thought we had pretty good chances of winning it all.”

Said Yesker, “We practice together a lot during the season so that made it easier.”

Notes: The top two in each division advance to states, which is scheduled to begin Friday at 10 a.m.