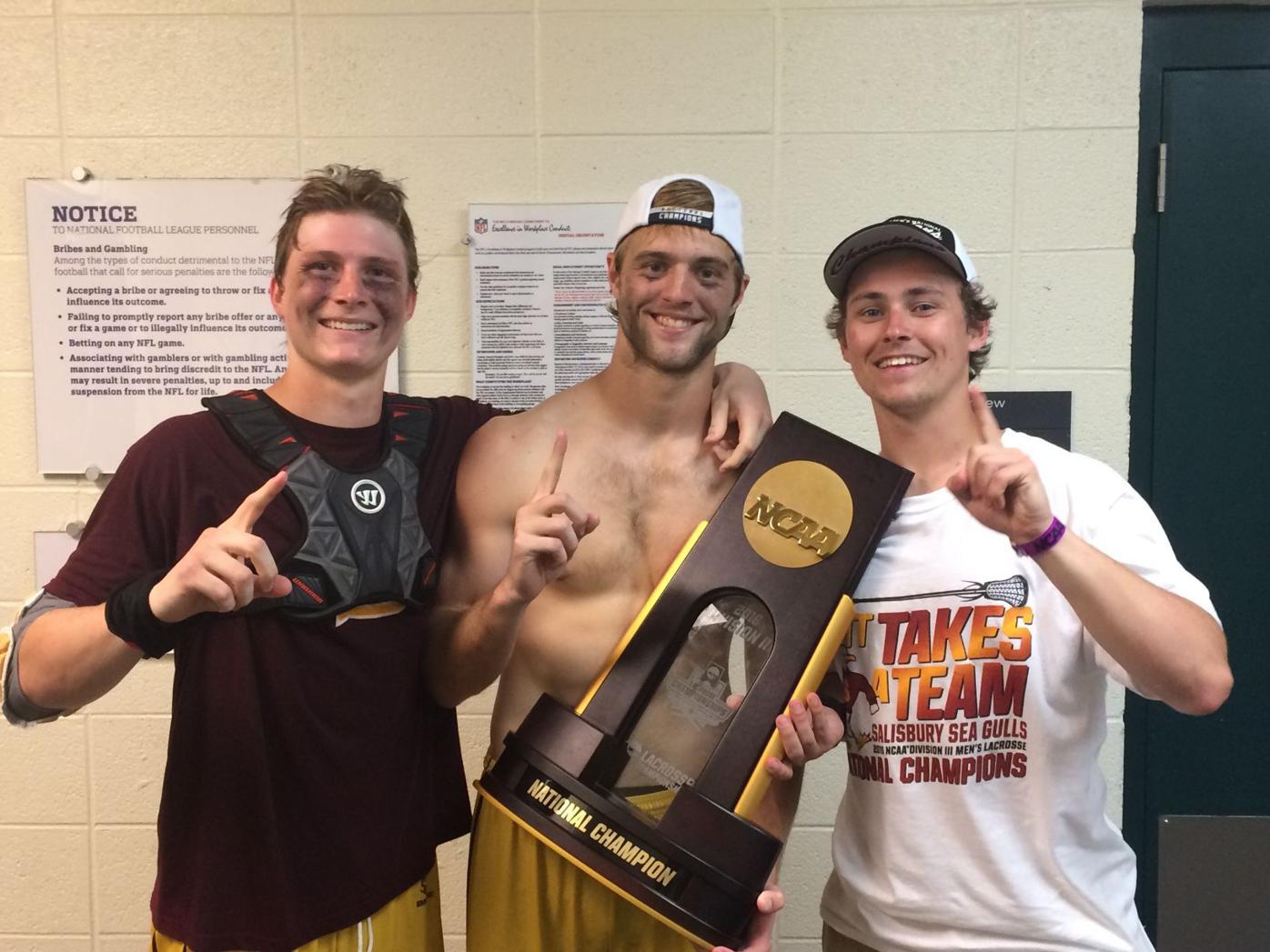 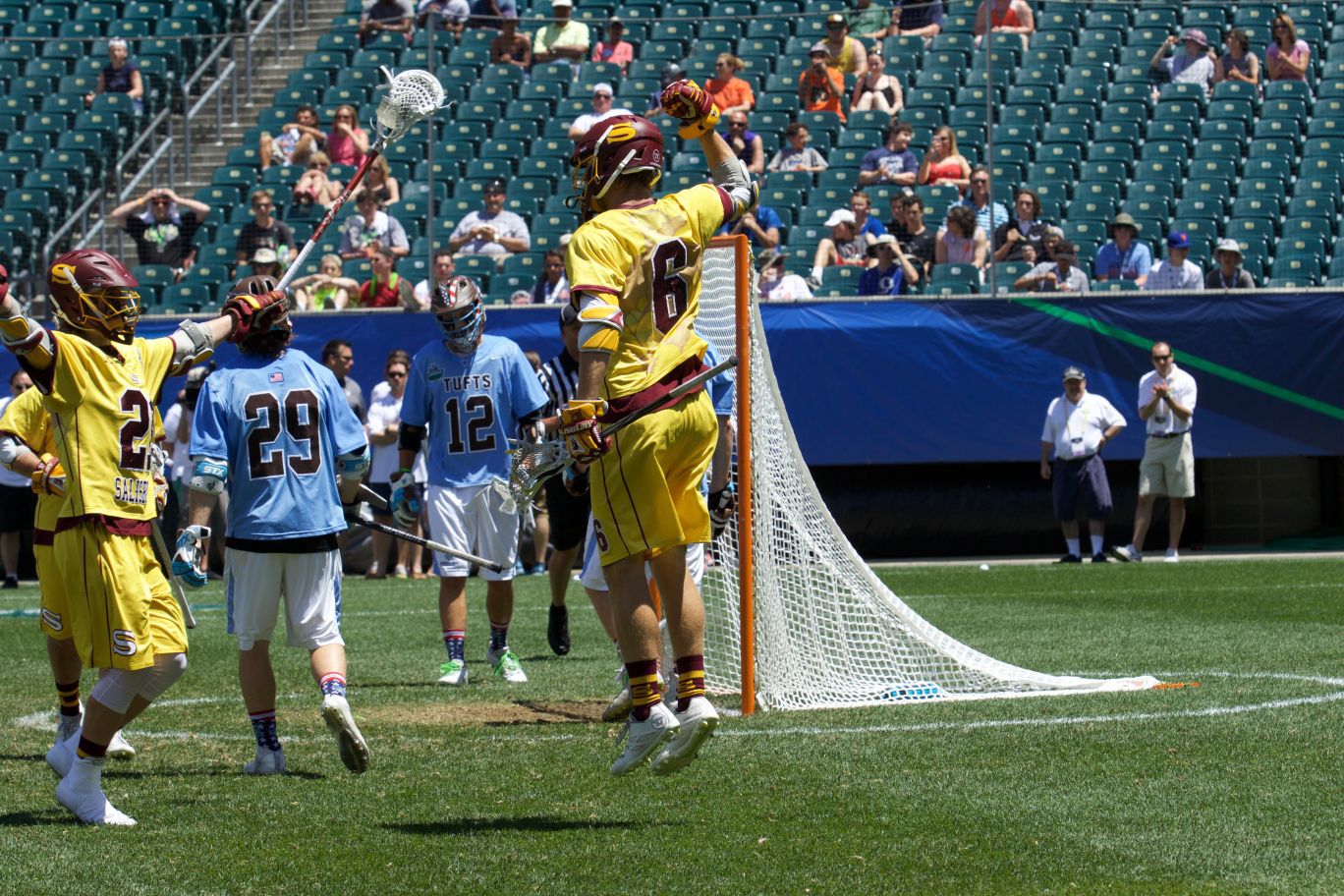 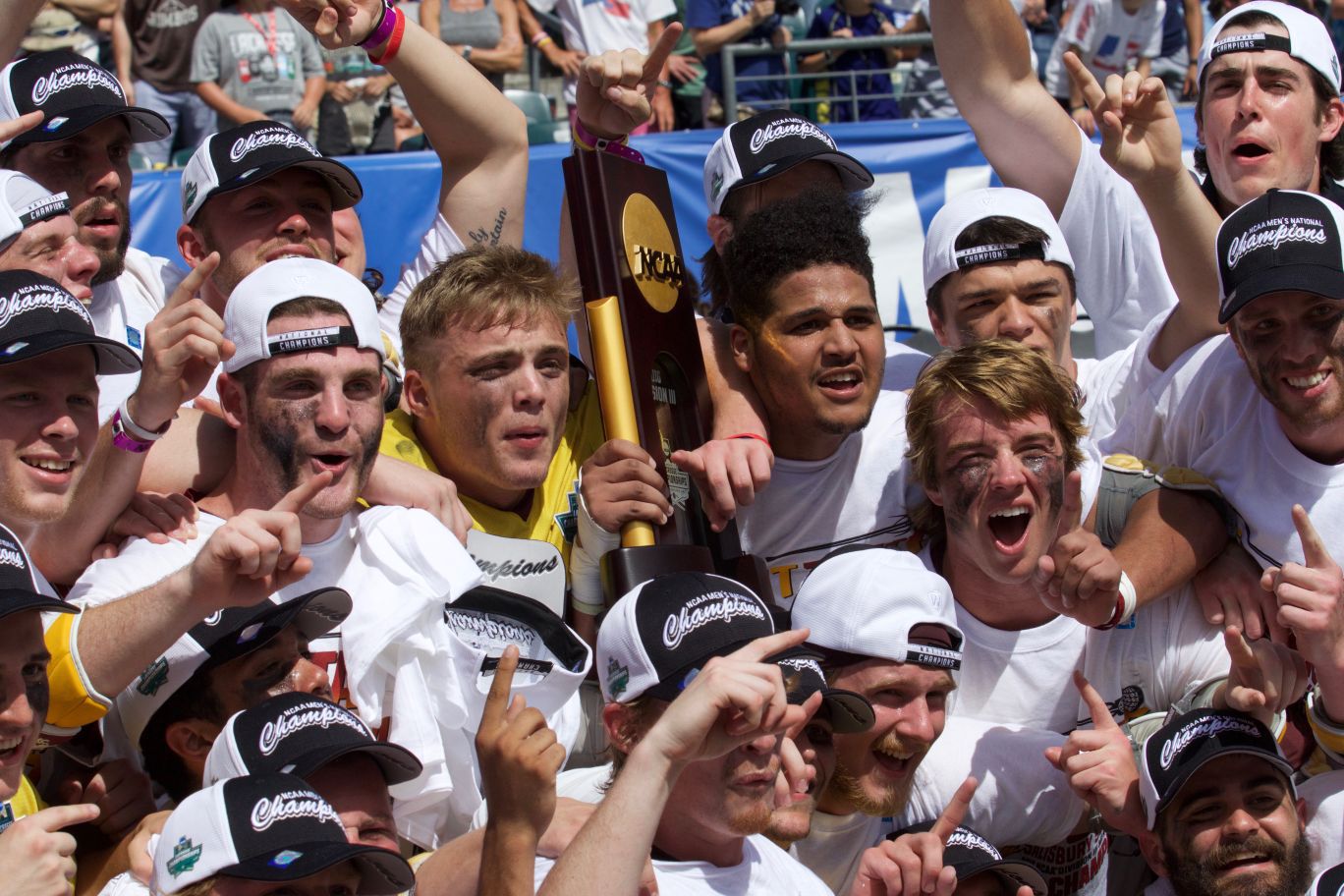 Salisbury University junior Brendan Bromwell (6) prepares to fire a shot during the first period of the May 29, 2016 NCAA Division III Men’s lacrosse championship against Tufts (Mass.) University, at Lincoln Financial Field, in Philadelphia, Pa. Bromwell’s shot was good for a goal, tying the game at 3-3; he added an assist later in the game as Salisbury went on to win, 14-13.

PHOTOs BY CHARLES BILCONISH
1 of 3

PHILADELPHIA — Having been on a team that made the Division III national championship but lost two years ago, Brendan Bromwell didn’t want to feel that way ever again.

Salisbury (22-1) fell behind 2-0 in the game’s first three minutes, and nearly blew an eight-goal lead when the Jumbos (20-3) put together a huge third-quarter rally, nearly erasing a seemingly insurmountable 12-4 lead.

“The feeling of this is a thousand times better,” Bromwell said. “I just can’t even describe it.”

“Throughout the year ... we kinda get that first goal scored on us pretty early, but the team comes back and responds really fast,” Wright said. “We run the plays right; we talk it up on D. Our goalie is just phenomenal. ... Our team just came together today in the fourth quarter, and it just showed.”

Winning the fist faceoff, Tufts lost the ball on a turnover, but got it back after goalkeeper Alex Salazar (eight saves) stopped Nathan Blondino’s shot. The ensuing ground ball went to Tufts defender John Sax with 13 minutes, 34 seconds to go.

Forty seconds later, the Jumbos got on the board first on a Chris Sawyer blast, coming off a Jake Gillespie feed.

The Jumbos added a goal by John Uppgren (four goals) just 33 seconds after that. In an impressive display of concentration and athleticism, Uppgren, falling backward, still managed to launch the ball over his shoulder and beyond Sea Gull goalie Colin Reymann (15 saves), skipping it into make it 2-0.

But then the Sea Gulls defense punched the clock and went to work. Despite losing first-quarter faceoffs, 4-3, the Sea Gulls grabbed seven ground balls after the first pair of Tufts goals, and went 4 for 4 on clears that period, while the offense stayed even in shots at 10-10.

Nick Garbarino, who finished with a hat trick and a pair of assists, scored Salisbury’s first goal with 7:02 left in the first.

Tufts got it right back just over a minute later, though, Uppgren feeding Gillespie to make it 3-1.

Salisbury’s offense picked up the pace as the first wound down, beginning a run that would give it the lead for good.

Though Tom Cirillo, one of Salisbury’s biggest offensive producers on the season, got knocked flat on a hard, but legal check as he worked near the crease, just inside the 3-minute mark, he was there in the clutch.

After goals by Garrett Reynolds and Bromwell tied the game 3-3 in the final minute of the first, Cirillo, a senior attacker with 52 goals this season, scored to give the Gulls the lead, 4-3, as the first quarter expired.

“Tom Cirillo, I tell you what,” Bromwell said, “if there’s one guy that you want to give the ball to, it’s him. ... You give that guy the ball, and you know he’s going to make it count.”

Tufts tied the game 4-4 on Austin Carbone’s goal not quite three minutes into the second, but the Gulls answered — five times — as the half wound down. James Burton (three goals, two assists), Carson Kalama, Nick Garbarino twice, and then Blondino — whose shot, like Cirillo’s in the first, came as the final second ticked off — found the net, putting Salisbury up 9-4 at half.

The rout seemed on as the third quarter moved along.

Bromwell assisted Burton on a goal 2½ minutes after the break, and goals by Blondino and Kalama made it 12-4 with 9:12 remaining in the third.

But more glaring than the Sea Gulls’ scoring run was the Jumbos’ drought. After Carbone’s goal in the second period, Tufts went more than 20 minutes without a score, possibly the longest stretch of the season.

It ended, though, around the 7-minute mark, and the Jumbos went on a third-quarter tear. Gillespie, Zach Richman, Uppgren, and Carbone each scored within the next five minutes, cutting the eight-goal deficit in half and putting the Salisbury defense on its heels.

It came as no surprise to Howard, who saw increasingly more time as teammate Andrew Ternahan, a junior long-stick and Stephen Decatur alumnus, cramped up.

The answer didn’t come, though, until the Jumbos were much closer. Ben Andreycak’s goal in the final minute of the third, and then scores by Tucker Mathers and Uppgren made it 12-11.

After Richman drew a one-minute penalty for an illegal body check, the Gulls capitalized as Burton fed Cirillo, who made it 13-11, Salisbury, with 11:38 to play.

But that insurance got cashed in just over a minute later, as Uppgren, who finished the season with 73 goals in 23 games, scored to pull Tufts back within one.

Burton scored unassisted with 6:06 to go, to make it 14-12. But down the stretch, Tufts kept coming.

The Sea Gulls were outshot 50-31, and Tufts also dominated faceoffs, 21-8. Keeping possession, the Jumbos fired four shots as the clock wound down. Richman, in front of the crease, was in the perfect place to pick up the rebound of a shot by Carbone, which Reymann had deflected, but not caught.

Richman scooped it, and twirled, firing past the off-balance Gulls goalie to make it 14-13.

Needing to kill clock to capture the title, Salisbury managed to do so until the final minute, when they could not convert under the 30-second clock.

With 45 ticks left, Tufts got the ball back and moved downfield. Eventually, Uppgren, a first-team All-American, got the ball, and, perhaps three paces in front of Reymann, sent in a shot, with four seconds to go.

Reymann netted it, and with a crowd of Tufts players near, launched high clear downfield to no one in particular.

The final seconds ticked off as the ball flew through the air, and the celebration was on for Salisbury.

“They’re a third-quarter team — obviously,” Bromwell said, “but we were able to hold them off because of what we had done in the first half.

“We had a couple goals in the third quarter and the fourth quarter, too,” Bromwell added. “And we were able to hang on. ... My heart was beating very fast, I can tell you that. I just can’t describe it.”

“It’s great, just great; I don’t have the words to describe it,” Howard said. “It’s just amazing to be here, having done this, right now.”

Wright agreed. “I just can’t tell you how good this feels,” he said. “But, we celebrate tonight, and then we get back to work tomorrow.”

“Yeah,” Howard said. “This season’s over. It’s been great. We enjoy this moment — but next season starts tomorrow.”

Notes: Reymann’s 15 saves tied a career-high, set on mid-April in a win over York (Pa.); in early May, during the Capital Athletic Conference’s annual tournament, York handed the Sea Gulls their only defeat of the season, 10-9. Reymann was named Most Outstanding Player for his efforts in the net on Sunday. ... The title was Salisbury’s 11th, all coming under head coach Jim Berkman; his 11 titles is the most in Division III history. ... The victory by the Gulls avenged a 2014 loss to the Jumbos in the national championship at M&T Bank Stadium in Baltimore. ... Head-to-head, the teams are now 2-2 in the national title game.