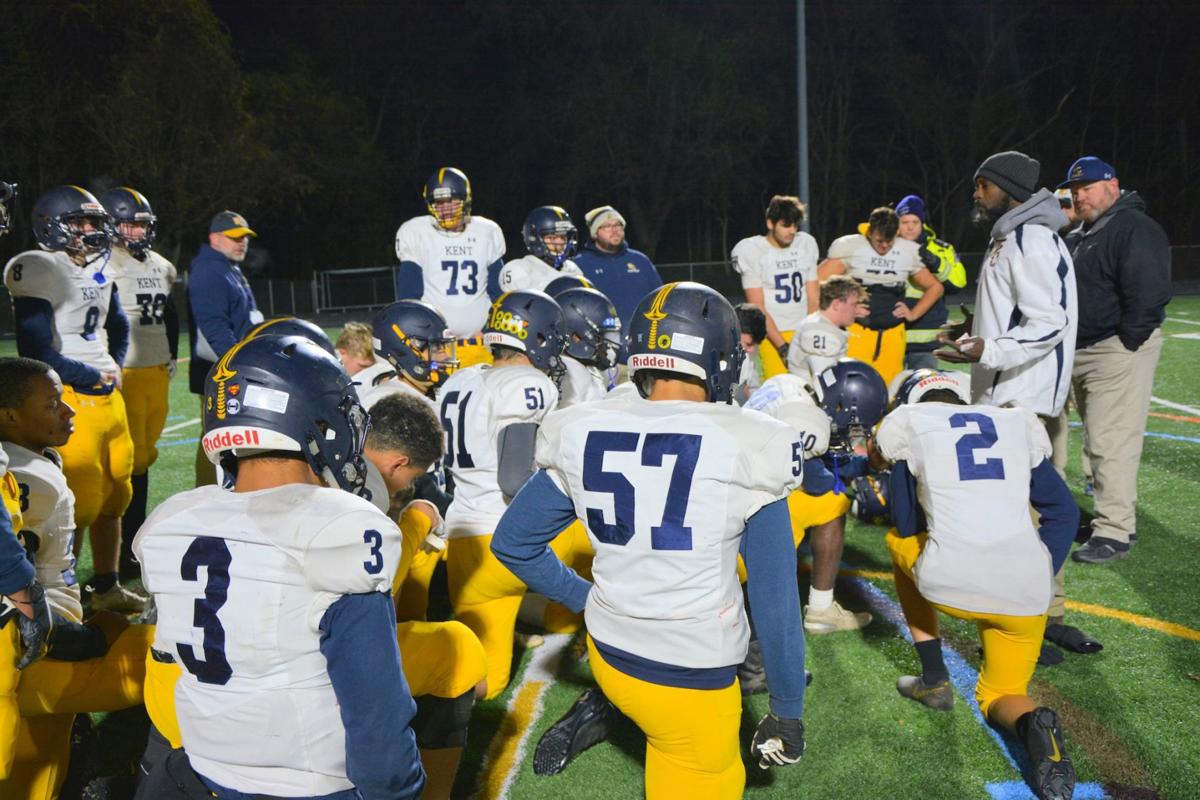 Kent County High School’s football coaches talk to the players Friday night after a 20-7 loss at Perryville in the first round of the Class 1A East Region tournament. This was Kent’s first playoff appearance since it won the region championship in 2016. 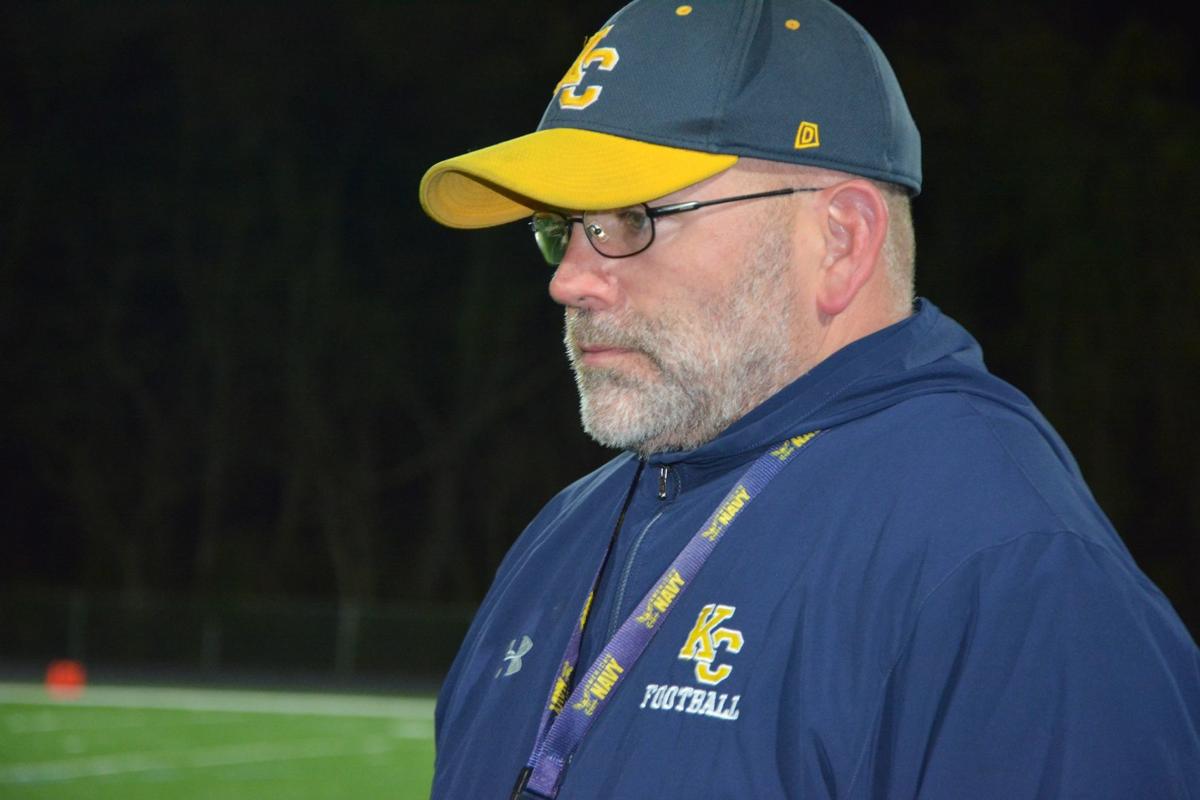 Second-year head coach Dave Boyle said he believes the Trojans were more competitive than last year, even though they had only one more win in 2019 than in 2018. 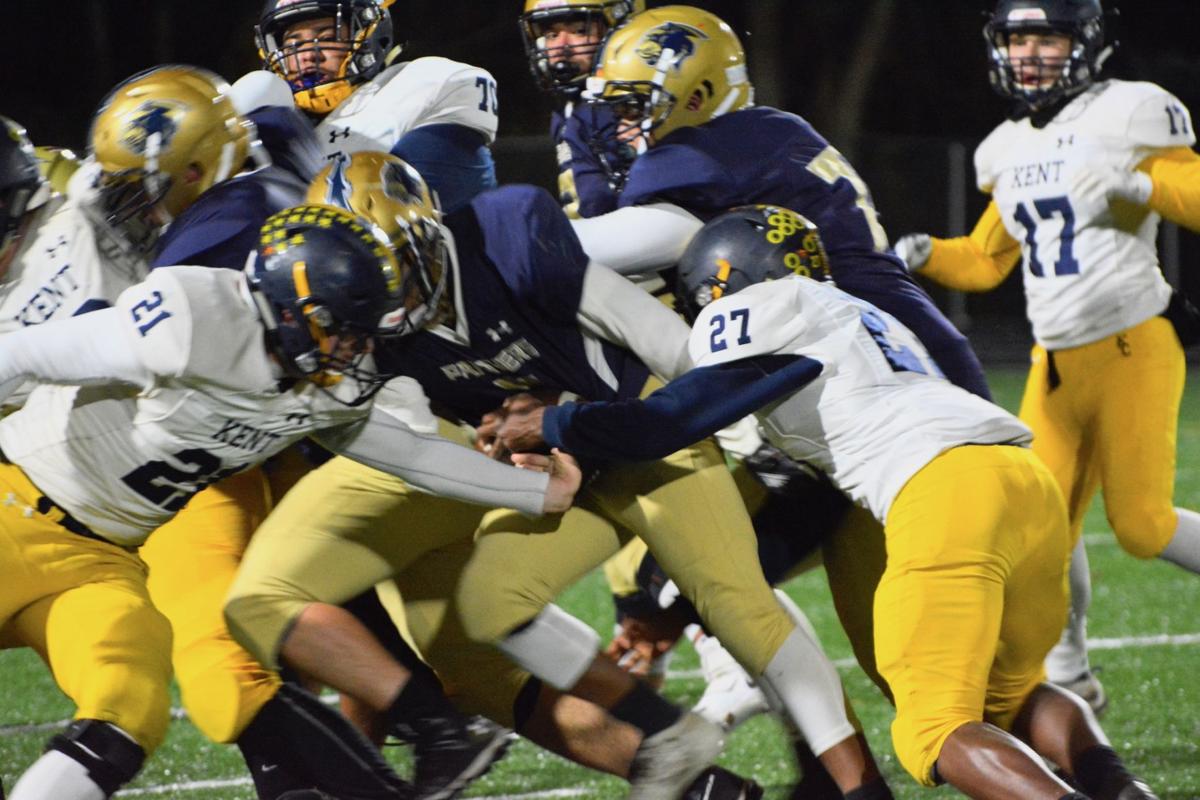 Kent County High School’s football coaches talk to the players Friday night after a 20-7 loss at Perryville in the first round of the Class 1A East Region tournament. This was Kent’s first playoff appearance since it won the region championship in 2016.

Second-year head coach Dave Boyle said he believes the Trojans were more competitive than last year, even though they had only one more win in 2019 than in 2018.

PERRYVILLE — Two missed field goal attempts, a point-after-touchdown kick that bounced off the uprights, a lost fumble and an interception. These are reasons why Perryville could have been one and done in the Class 1A East Region football tournament.

But the No. 3 seed was opportunistic, turning two Kent County turnovers into touchdowns on the way to a 20-7 victory in Friday night’s opening round of the playoffs.

The Panthers won for the third game in a row to improve to 6-4. They scored on back-to-back possessions in the second quarter, taking a 13-0 lead that they never lost.

No. 6 seed Kent (4-6) ended the shutout with 1 minute, 16 seconds remaining in the half, but played a futile game of catch-up.

“We didn’t connect on the deep ball and they did,” Kent coach Dave Boyle said about a game that on paper looked to be between two well-matched teams.

Tyler Nasuta’s 26-yard scoring strike to Daniel Tserkis with just over three minutes remaining in the first half proved to be the winning touchdown.

It was the second of two TDs that the Panthers scored in the span of 1:14.

Perryville and No. 6 seed Kent played to a scoreless tie through the opening 20 minutes, though Kent was not without its chances.

On the third play from scrimmage on the opening drive, quarterback Thomas Goldsborough (2-of-9, 44 yards) overthrew Peyton Taylor on a corner route.

“If Peyton catches that in stride, he’s gone,” Boyle said.

The Trojans caught a break on the ensuing possession when Peyton Taylor picked off Nasuta, but they weren’t able to capitalize. There were two penalties, a pass intended for Taylor Lyons that was broken up at the Perryville 15-yard line and ultimately Kent fumbled away the ball.

Perryville marched all the way to the Kent 16 over the final 2:29 of the opening frame, but fumbled on the first play of the second quarter. Taylor recovered for Kent.

The Trojans’ ensuing drive stalled and they punted on fourth-and-2 with 10:30 remaining before intermission.

Each team had another empty possession — Josh Medford came up big for Kent with a quarterback sack — before Perryville engineered a 58-yard scoring drive that ended the shutout.

On fourth-and-3 on the Kent 21 with 4:16 to play in the first half, Nasuta ran untouched to the goal line and then slipped away from Gary Emory at the left pylon into the end zone. The lead was 6-0 after the extra-point kick hit the left upright.

Kent fumbled on the ensuing kickoff with Zach Clark recovering on the 37. On third-and-10 from the 26, Nasuta found Tserkis on a crossing pattern. This time the PAT kick split the uprights, and the margin was 13-0.

The Trojans cut the deficit in half on their next possession, moving the sticks 78 yards in 1:40 and culminating with Tylante Wilson’s 36-yard touchdown run. Ryan Argo’s kick was good, closing the gap to 13-7.

Perryville attempted a 28-yard field goal on the final play of the half, but the kick was wide left.

The Panthers scored on their second possession of the second half, an interception setting up a 19-yard touchdown run by Jaimere Guy that extended the lead to 20-7 with 2:40 remaining in the third period.

Kent’s best scoring chance of the second half came midway through the fourth quarter, a drive that started on its own 15-yard line and gained the equivalent of about half the length of the field.

Back-to-back first down runs by Goldsborough (12 carries, 66 yards) and then a 32-yard catch by Lyons had the Trojans flirting with the red zone, but they lost yardage over the next four snaps and ultimately turned over possession on downs with 5:33 to go.

In a telephone interview Sunday night, Boyle was still trying to process the loss in the context of a season he said where there were “missed opportunities.”

“We probably could have done better, against Bennett, Queen Anne’s and Perryville,” he said. “The Perryville game is a good game to look back on and ask, ‘What went wrong?’”

Of the season in general, Boyle gave a shout-out to a “good group” of seniors who accomplished a lot on and off the football field. That includes the core group of Brandon Crouch, Jose Olavarria, Peyton Taylor and Kolby Walters, who have been with the program all four years.

“I think we were more competitive than last year, even though we had only one more win,” Boyle said, noting that the Trojans totaled nearly 1,000 more yards of offense this year.

A lot of talent and size will graduate with this class, but Boyle believes that the program is well positioned for continued improvement. Thomas Goldsborough, Ty Wilson, Will Ashmore, Gary Emory and Brandon Myers head the list of juniors who are expected to assume leadership roles next year. Plus, the relaunch of the junior varsity program bodes well for KCHS football.