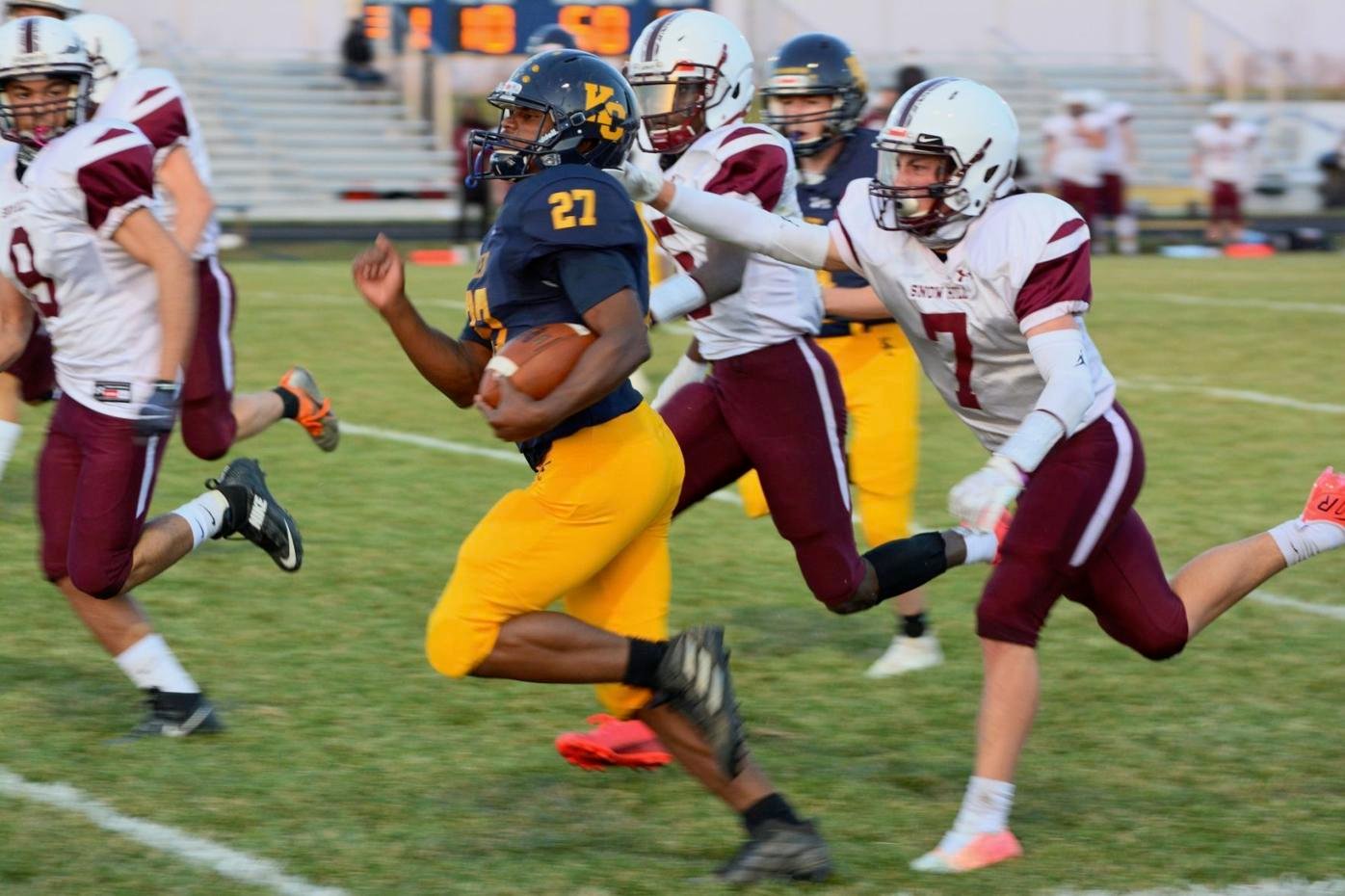 Tylante Wilson rushed for 72 yards and a touchdown on six carries Friday night in Kent’s 47-20 victory over Snow Hill. Wilson, a two-way starter, also had a fumble recovery and 10 solo tackles. 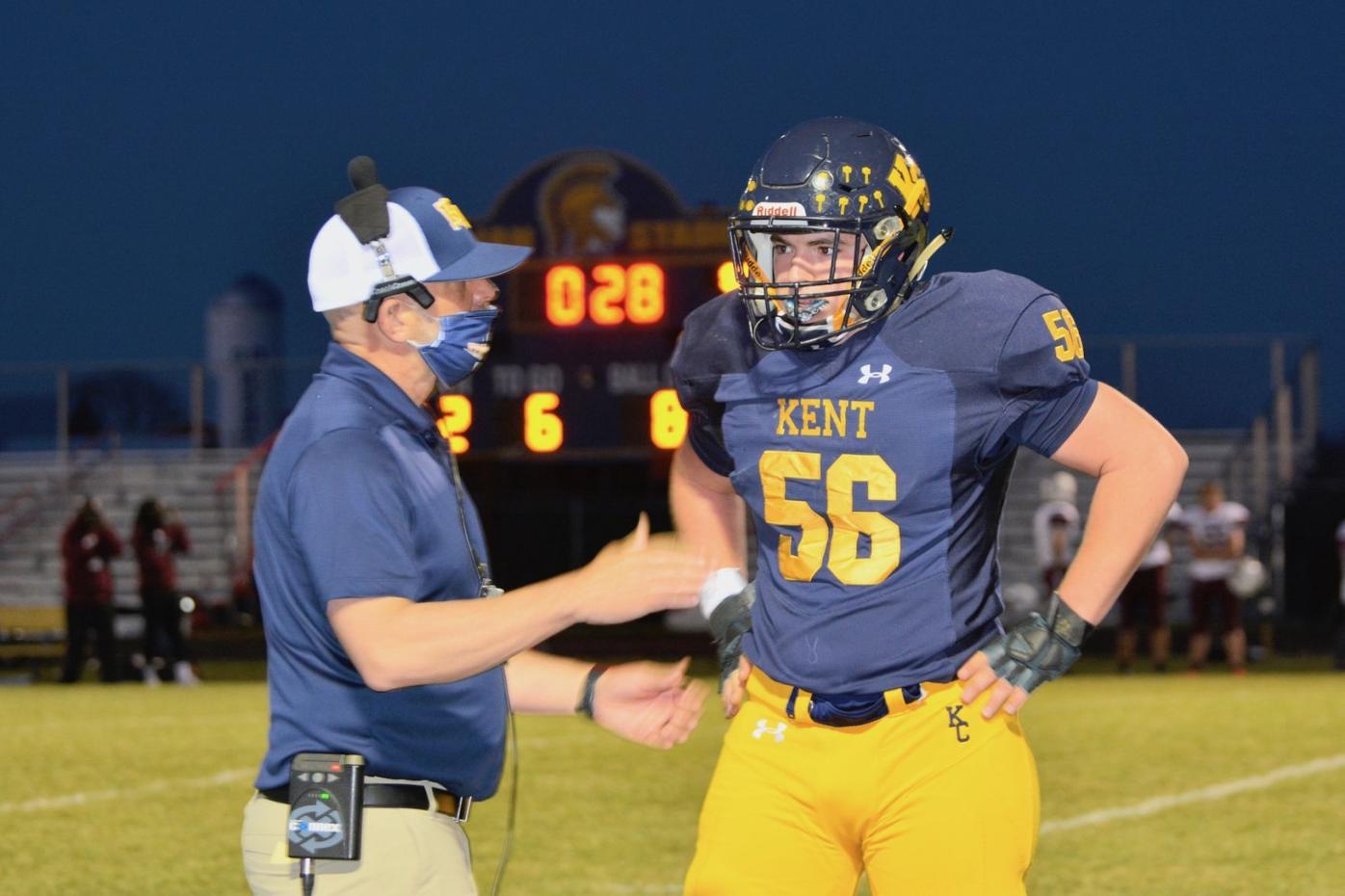 Kent County head football coach Brian Aikin talks to linebacker Brandon Myers, who filled in Friday night as a placekicker. Myers was 3-of-5 in extra-point kicks. He also had nine tackles.

Tylante Wilson rushed for 72 yards and a touchdown on six carries Friday night in Kent’s 47-20 victory over Snow Hill. Wilson, a two-way starter, also had a fumble recovery and 10 solo tackles.

Kent County head football coach Brian Aikin talks to linebacker Brandon Myers, who filled in Friday night as a placekicker. Myers was 3-of-5 in extra-point kicks. He also had nine tackles.

WORTON — Kent County’s football roster is a mixture of rookies, veterans and some who are learning the sport on the fly. They have come together as a team, which was evident Friday night when they embraced the “next man up” philosophy.

Linebacker Brandon Myers and quarterback Thomas Goldsborough filled in for kicker Will Maier, a starter on the soccer team who had a 5:30 p.m. match at North Caroline High School in Ridgely.

Senior Dylan Conner, who is playing football for the first time, didn’t wait for his name to be called when a Kent receiver came off the field due to injury.

That team-first attitude, which starts at the top with senior captains Myers and Goldsborough, paid off to the tune of a 47-20 triumph over Snow Hill.

Coach Brian Aikin said it was a good bounce-back win for the Trojans, who were on the receiving end of a 52-13 beatdown the week before when two starters went out with what appears to be season-ending injuries.

Kent suited up only 19 players.

Goldsborough, freshman LaShawn Moody and Wilson scored on consecutive possessions to give Kent an insurmountable 21-0 lead with 9 minutes, 29 seconds remaining in the first half.

Kent swept the two-game series with Snow Hill to improve to 2-2.

Goldsborough completed 16 of 28 passes for 172 yards and four touchdowns.

Sophomore Matt Wade moved from defensive end to under center for the Trojans’ final series. He threw one pass, which was incomplete.

The Trojans turned over the ball on their first play from scrimmage when Goldsborough’s pass bounced off the intended receiver’s chest and into the hands of a defender.

On its first series, Snow Hill (0-3) moved the ball to the Kent 10-yard line and had first-and-goal. But the Eagles picked up only 3 yards on the next three plays. A false start penalty pushed them back to the 12.

On fourth-and-long, Emory picked off a pass and raced up the sideline, stepping out of bounds at the Snow Hill 40.

Kent picked up a first down at the 30, but subsequently lost ground. On fourth-and-12, Goldsborough bobbed and weaved his way into the end zone for the first of his two rushing touchdowns.

Emory hauled in the 2-point conversion pass for an 8-0 lead with 4 minutes, 32 seconds remaining in the opening quarter.

Snow Hill was three-and-done on its next possession, as a Wilson sack and then a delay of game penalty made it fourth-and-27. Snow Hill barely got back to the line of scrimmage with a shanked punt, giving Kent very good field position.

The 36-yard drive ended with Goldsborough’s touchdown pass to Moody with about 11 minutes to play in the half. Moody made a terrific grab, keeping his feet inbounds while falling to his back.

The Trojans’ next touchdown came on another fourth-down conversion, this time with Wilson bulldozing his way across the goal line on a 3-yard carry.

Myers’ point-after kick cleared the uprights, increasing the lead to 21-0 with 9:29 remaining before intermission.

Myers would finish 3-of-5 on extra-point tries.

Kent answered on its next possession, Goldsborough finding Emory on first-and-goal from the 6-yard line. Freshman Landon Wallace’s first-down grab near midfield kept the drive alive.

On the ensuing possession, Snow Hill was unable to convert on fourth-and-2 from the 6 on the final play of the half, sending Kent into the locker room with a 27-6 lead.

The Trojans were never in danger of losing their lead in the second half.

Rick Townsend and Jamarcus Downes did an outstanding job up front on defense, which allowed linebackers Wilson and Myers to make tackles.

For the first time this season, Goldsborough, who is headed to Division I Long Island University as a quarterback, played some defense for the banged-up Trojans. In the first half, he made a touchdown-saving tackle at midfield while covering his own kickoff.