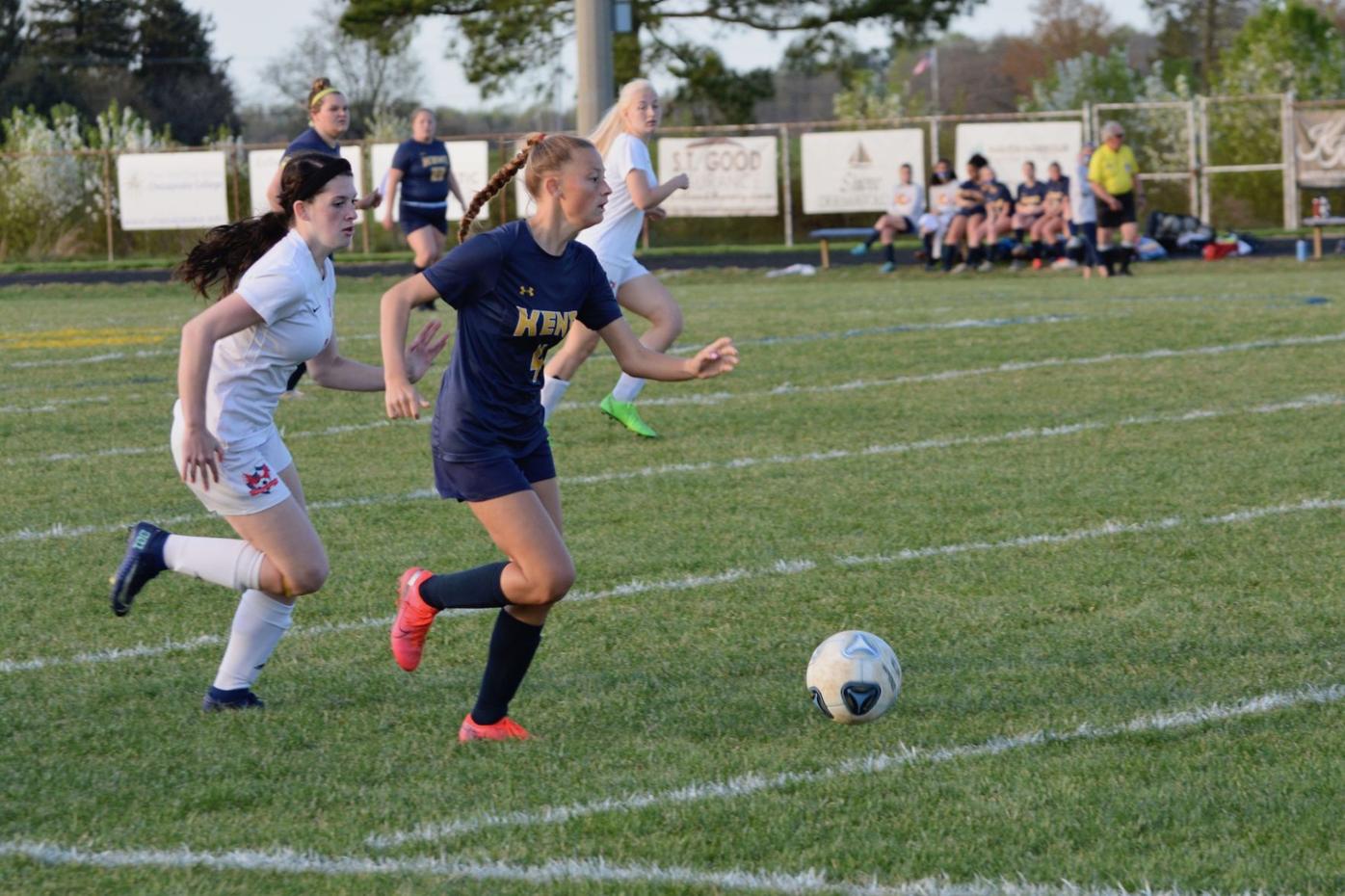 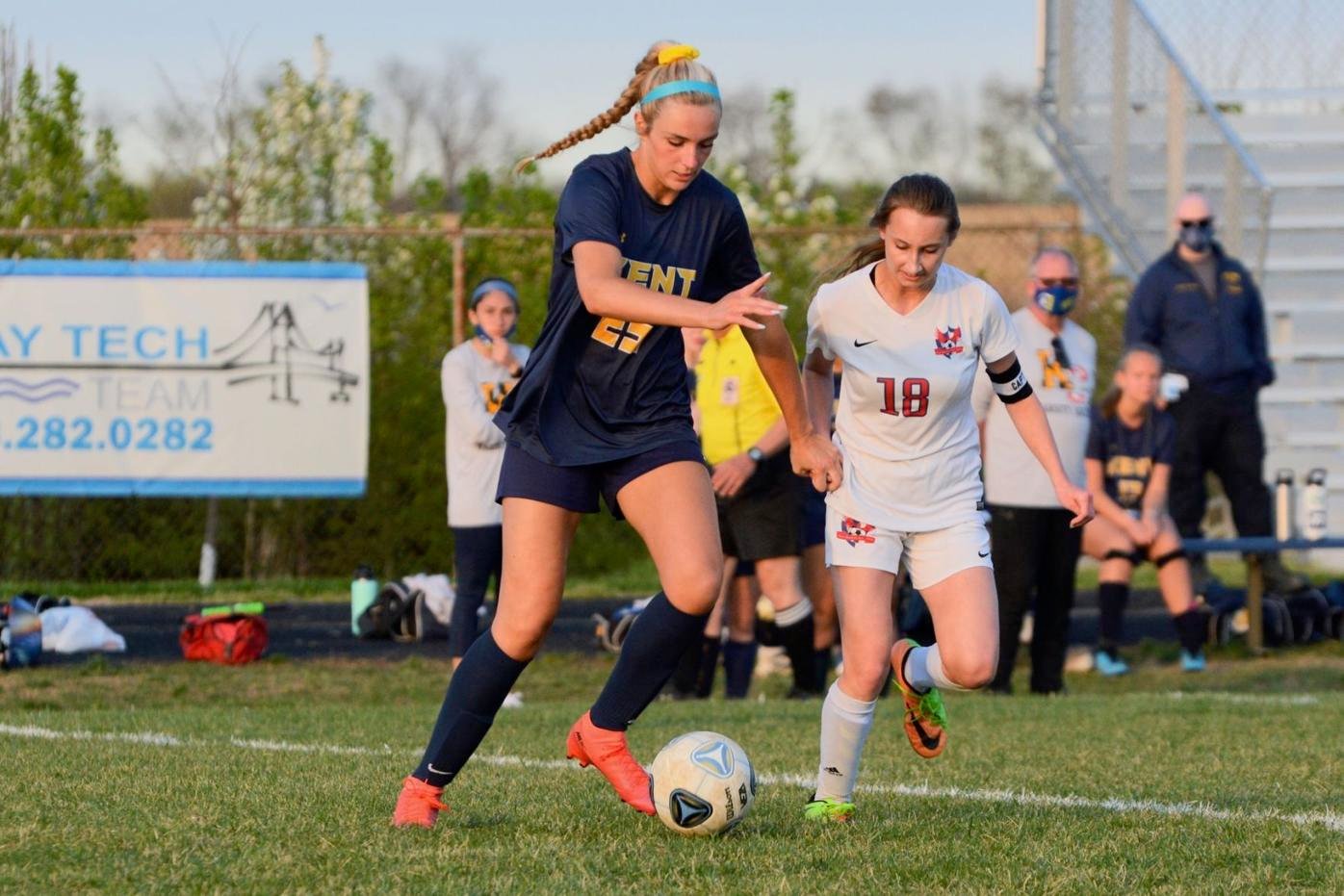 Controlling the middle of the field, senior Maddy Kendall was able to kickstart an explosive Kent County attack that finished with 40 shots April 8 in a 5-0 triumph over visiting North Dorchester. Defending is ND captain Megan Price.

Controlling the middle of the field, senior Maddy Kendall was able to kickstart an explosive Kent County attack that finished with 40 shots April 8 in a 5-0 triumph over visiting North Dorchester. Defending is ND captain Megan Price.

WORTON — Try as she might, Erin Riggin was unable to save North Dorchester’s girls from the barrage of 40 shots the Trojans launched Thursday night.

Kent County scored three times in the opening 25 minutes and cruised to a 5-0 victory, improving to 6-3 and assured of a winning season for the first time since the 6-4-3 campaign of 2015.

Riggin (23 saves) stood out for the visiting side, smothering balls at the doorstep and charging off the line to foil the Trojans from close range — sometimes without regard for her own physical well-being.

But there was no way to stop Kent.

This was the final home match of the COVID-delayed fall 2020 season that was played in March and April, and the final match ever in Trojan Stadium for Kent’s nine seniors.

Cecilia Llamas scored what proved to be the winning goal in the 10th minute, booting the ball from the center of the box after gathering in a pass from Emma Walters.

They are both seniors.

Walters scored the insurance goal with a shot that nestled into the far corner of the net after she beat a defender down the right sideline.

Her passes from the right wing were routinely spot on, providing the Trojans with many scoring opportunities.

Kent pushed its lead to 3-0 in the 25th minute on Molly Grafton’s shot taken from about 10 yards outside the box.

Grafton, another of the Trojans’ seniors, is a first-year varsity player. This was her first goal.

Sophomore Ally Berghaus stopped seven shots after intermission to preserve the shutout, the fifth of the season for the Trojans. Berghaus is the backup to Livy Daniels, who is the backup to starter Alana Fithian Wilson.

All three keepers are underclassmen.

Daniels and Fithian Wilson were sent out as strikers in the second half, and they partnered on Kent’s fourth goal in the 64th minute. Daniels was the last to get her feet on the ball in a crowded box; Fithian Wilson had the assist.

“They were a pretty good team up top together. They knew what needed to be done to finish, and did it right away,” Gugasian said of the pair.

The following day, Class 2A North Caroline at home defeated smaller 1A Kent, 4-0.

To minimize travel during the pandemic, Kent is playing a North Bayside-only schedule. Most of the schools in the North division are 2A based on their enrollment.

Kent’s losses are to Queen Anne’s, Kent Island, Easton and North Caroline — all 2A opponents.

“This was the best we have played against a 2A team,” she wrote in an email to the Kent County News. “We were connecting passes, making smart plays and had some shots on net that were very close.”

She said senior Maddy Kendall “had a great game, delivering balls from the middle of the field and making some really smart plays that forced us up the field.”

Ditto for senior Olivia Jones, who won 50-50 balls in the middle of the field to “give us a lot more possession,” Gugasian said.

What Gugasian described as an “unlucky goal” — Kent’s defenders were caught on a breakaway after pushing up too far — gave the home side a 1-0 lead at halftime.

Opportunistic North Caroline (3-3) scored twice more on breakaways in the second half and cashed in on a penalty kick.

Fithian Wilson (15 saves) went the distance in the net.

The Trojans were scheduled to wrap up yesterday at Colonel Richardson.

They opened the season with back-to-back wins against the Colonels, 4-0 there and 2-0 at home.