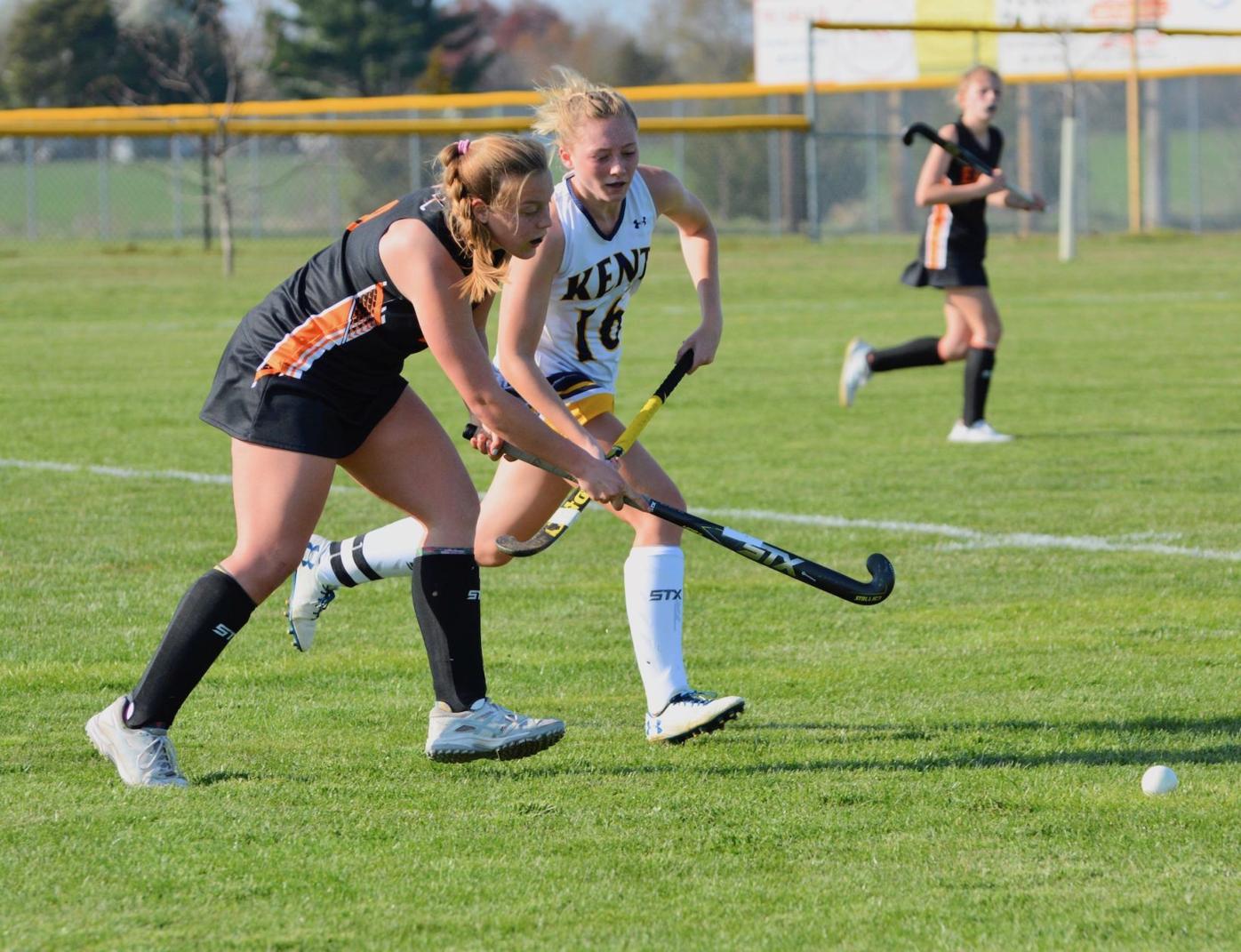 Kent County’s Kate Ervin gets a step on her Easton defender in first-half action Tuesday, April 6. Ervin scored both goals for the host Trojans, who won 2-1 in overtime. 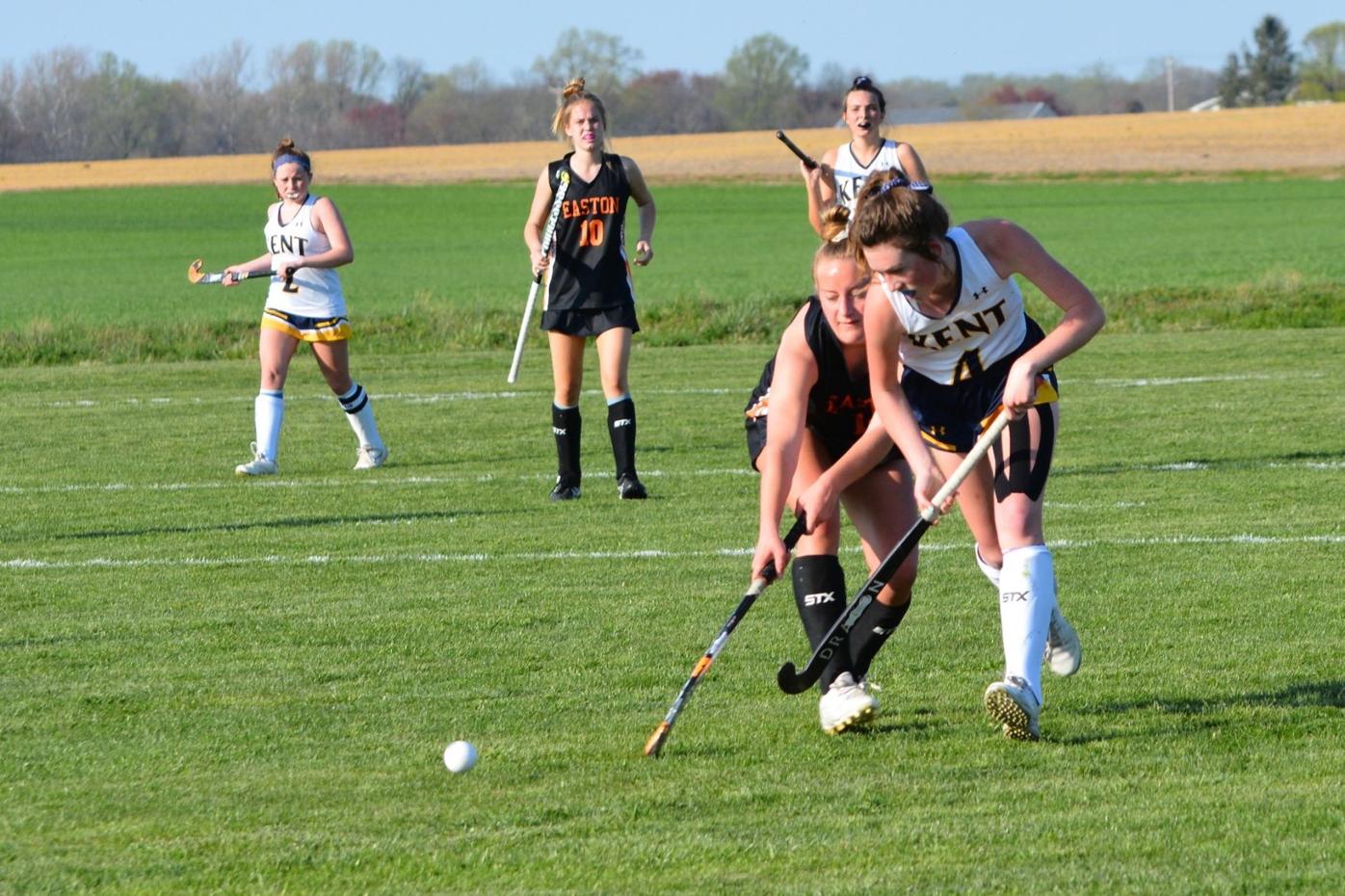 Kent County sophomore Delaney Jewell (No. 4) played all 66 minutes in the overtime thriller Tuesday against Easton. Her play on defense helped limit Easton to one goal.

Kent County’s Kate Ervin gets a step on her Easton defender in first-half action Tuesday, April 6. Ervin scored both goals for the host Trojans, who won 2-1 in overtime.

Kent County sophomore Delaney Jewell (No. 4) played all 66 minutes in the overtime thriller Tuesday against Easton. Her play on defense helped limit Easton to one goal.

WORTON — Maintaining composure is what strengthens Kent County’s field hockey team and what separates it from others, says Kate Ervin, a senior captain.

Ervin made that assessment Tuesday after Kent rallied to defeat a deeper and more experienced Easton, 2-1, in extra time. She scored both Kent goals, including the game-winner that came with 6 minutes elapsed in the 10-minute sudden death period.

After spotting Easton a 1-0 lead with 9 minutes, 39 seconds remaining in the first half, Kent deadlocked on Ervin’s goal with 3:16 to go before intermission.

The Trojans improved to 3-4 and avenged a 2-1 loss at Easton in the season opener March 8.

This is their first come-from-behind win of the season.

Kent head coach Susan Wright-Taylor said the difference in this game was confidence — Kent was coming off a morale-boosting 1-0 loss against always-tough Kent Island — and fitness.

Plus, the Trojans had a game plan for how they would defend against an opponent who skillfully builds and sustains an attack.

Rachel Heldmyer, Delaney Jewell and Annie Page Brocker did a good job of clearing the ball out of the scoring circle, while Ervin moved from the front line to midfield to help shore up the center of the field.

Lots of credit should go to freshman keeper Jaci Manning. After giving up 11 goals in back-to-back losses to open the season, she has allowed only three goals over the last five games.

Tuesday against Easton, Manning (five saves) learned from the early mistake that allowed Kat Knox to slam in a crossing pass into a wide-open left side of the box. Kent’s goalie pitched a shutout over the remaining 45 1/2 minutes, blocking several direct hits and the put-back attempts.

Kent is finishing the season with 13 players, which includes Manning and three other freshmen. Tuesday’s game marked the first start for ninth-grade forward Carly King, who got a few minutes of rest when classmate Drew Davis came off the bench.

The remainder of Kent’s starters played the full 60 minutes of regulation.

Ervin, Brocker, Heldmyer, Jewell, Sella Conner and Kendell Ford — in addition to Manning — logged additional time as they were the seven players that Kent sent out in the tie-breaking extra period.

After nearly six minutes of back and forth, Jewell collected the ball just outside the scoring circle and sent it to Ervin, who put on a clinic of skill, perseverance and desire in what turned out to be the final seconds.

“I was thinking that I had to get this goal in because it’s hot (mid-70s at game time), I’m tired and I can’t go another 15 minutes,” Ervin told the Kent County News.

After gathering in the pass from Jewell, Ervin maintained possession of the ball while trying to draw fouls for feet and third party obstruction, either of which would have resulted in a penalty corner.

There was another non-call for a blockout, adding to Ervin’s frustration and exasperation.

“That’s where I got really nervous,” she said.

Somehow, and you really had to be there to see it, Ervin recovered the ball before it went over the end line and with almost no angle sent the ball toward the cage.

At that point Ervin said she was hoping that Ford, who has a wicked drive, would have positioned herself to play what Ervin expected would be a rebound off Aubrey Lavezzo’s goalie pads.

“My angle was really bad and there was almost no chance that my shot could have gone it. It made me super nervous when they didn’t call a corner on the first two fouls,” Ervin said.

But, somehow, the ball found the back of the cage — sneaking past Lavezzo and into the far left corner, rolling agonizingly slowly into the open space, according to Wright-Taylor.

“It was sweet,” Wright-Taylor said of Ervin’s game-winner.

“I’m really happy it went in,” Ervin said. “I think all of us were really tired from the heat.”

She added: “I like how our team kept its composure and that’s what really makes us such a strong team compared to others.”

Tuesday was Senior Day, and the overtime win against longtime nemesis Easton was a fitting send-off for Ervin, Conner, Brocker and Katie Wade. They all are starters and have played hockey for four years at KCHS.

Afterward, in a small get-together off school grounds, the Trojans had a private celebration that included gifts for the seniors.

“It was nice to all be together and bond outside of practice,” Ervin said.

“It was fun to laugh and cry with each other,” she added. “We really haven’t had the opportunity to do that as a team since last year (2019) when things were normal.”

Due to the COVID-19 pandemic, the traditional fall sports season for public high schools across the state was cancelled in August 2020.

As health metrics improved, the green light was given for an abbreviated fall season in March and April.

Kent has three games remaining — at Queen Anne’s on Thursday, April 8, home against North Caroline on Monday and the finale at St. Michaels on April 15.