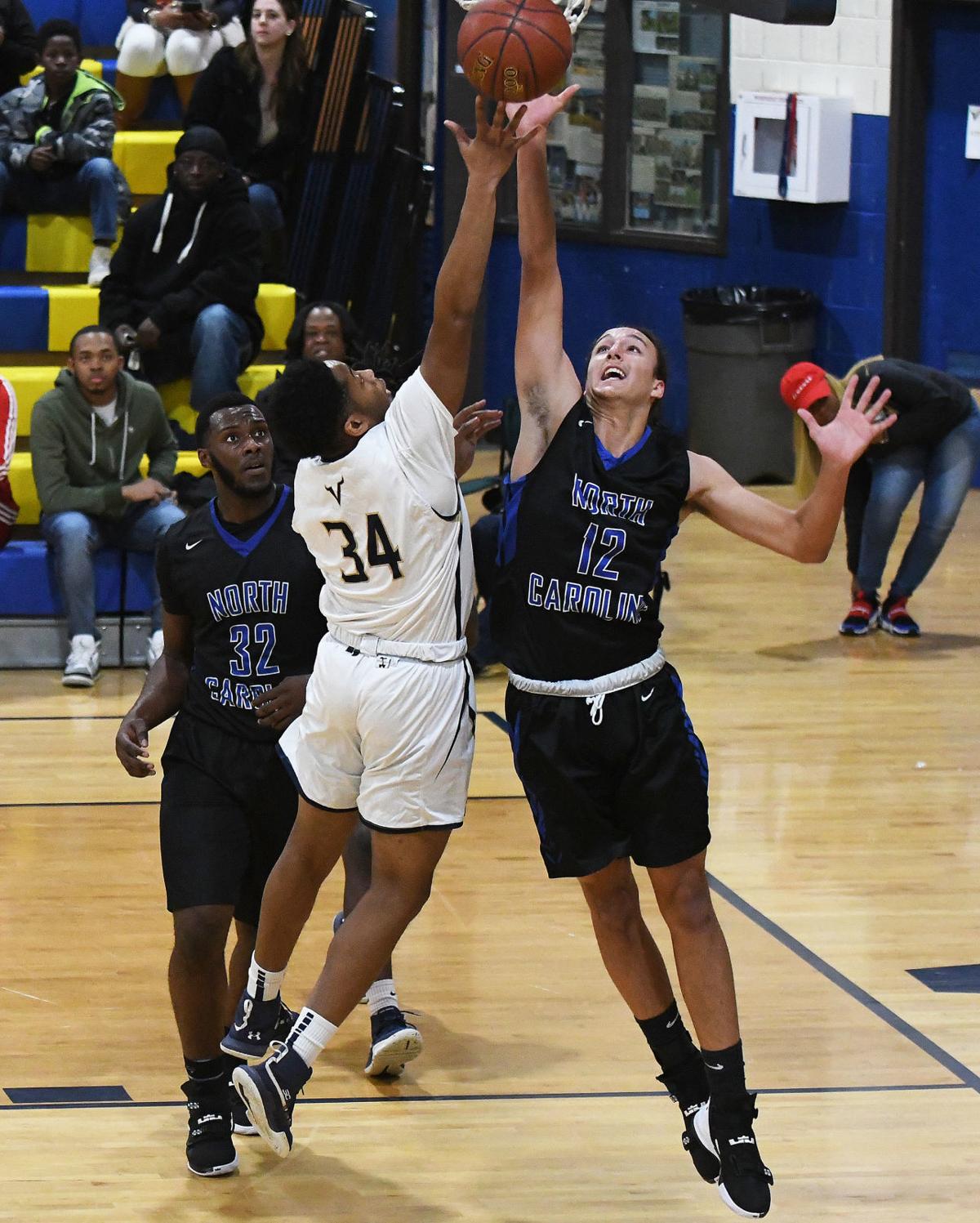 North Caroline's Chris Curler reaches to try to block a shot by Cambridge-South Dorchester’s Jeremy Taylor (34) during the first half Dec. 19 in Cambridge. 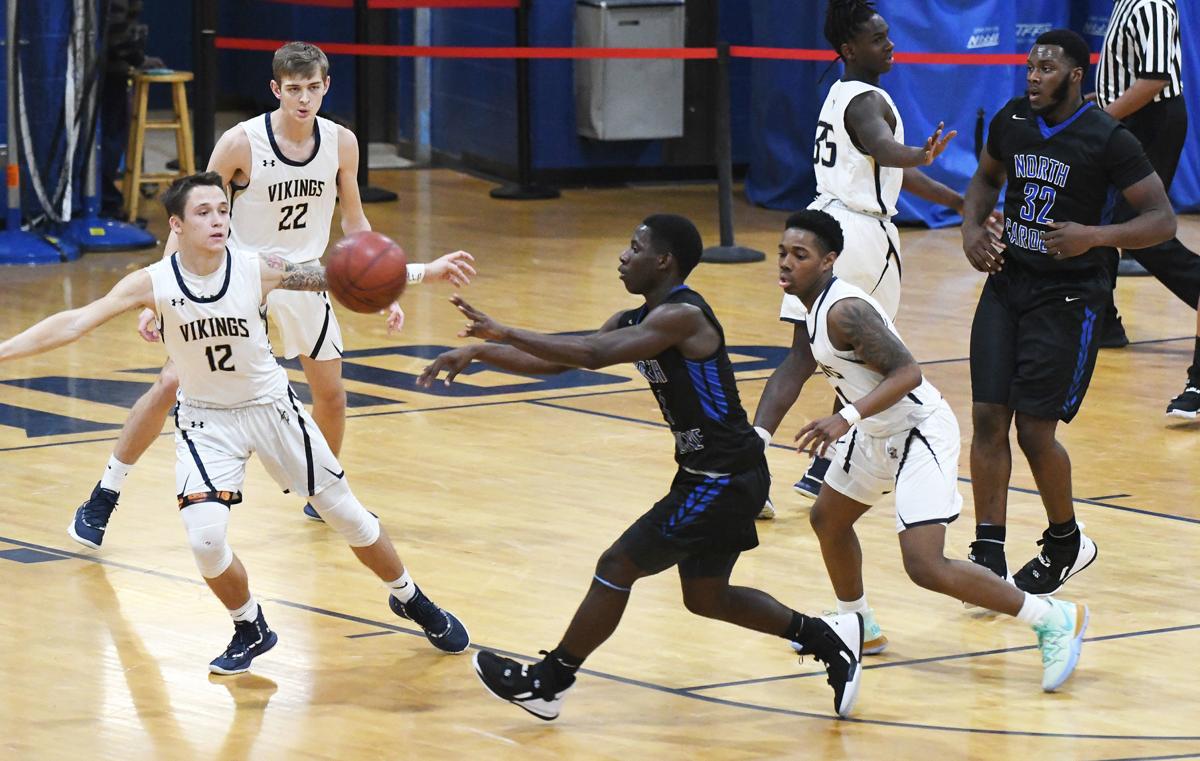 North Caroline's Chris Curler reaches to try to block a shot by Cambridge-South Dorchester’s Jeremy Taylor (34) during the first half Dec. 19 in Cambridge.

North Caroline's boys basketball team opened the game against Cambridge-South Dorchester with an 11-0 run and led the rest of the way for a 66-58 victory.

Dominating rebounding and scoring inside the paint, North Caroline’s Kendron Wayman pumped in a game-high 29 points, including seven points in the Bulldogs’ opening run.

Montreyse Deshields, back on the court after missing Tuesday’s game against Easton (a 67-59 loss), scored 13 points and hit three key free throws in the fourth quarter to keep the Vikings from mounting a successful rally.

Vidal Bonds and Jason Brown each scored 10 points for the Bulldogs (2-3).

Coach Steve Perry appreciated the victory but not his team’s turnovers that helped the Vikings stay in the game.

“It was not bad being the first time we’ve played with everybody in over a week,” Perry said. “We’ve just got to learn how to protect the ball, make better decisions when we’re up on another team. We’re just too inconsistent.”

Dajawan Jackson scored 22 points for Cambridge-SD, including six 3-pointers. He sank an NBA-range trey at the end of the third quarter as the Vikings closed within 45-41.

North Caroline responded with a 6-0 run to open the fourth, but Cambridge hung around, closing within 57-52 on tip-in by Davon Linder with two minutes to play.

With 1:14 left, Deshields was fouled shooting a 3-pointer and hit all three free throws to put the Bulldogs up 60-52. They closed the game with another free throw by Deshields, two by Bonds, and a three-point play by Wayman after he was fouled pulling down his last offensive rebound.

Cambridge outscored North Caroline 19-15 in the second quarter and 15-12 in the third to get close after being limited to seven points in the opening quarter.

Brown opened the game’s scoring and the Bulldogs’ 11-0 start with a driving lay-in. After a Vikings traveling violation, Brown fed Wayman inside and he was fouled. He hit one of two from the line. In a half-court trap, Brown collected a steal and Wayman soon after tallied off a feed from Deshields for a 5-0 lead with 5:30 left in the first quarter. Another Vikings turnover led to another bucket by Wayman, who converted an offensive rebound. Deshields turned a steal into a layup to make it 9-0, and Wayman ended the run by scoring off another offensive rebound.

“We knew he could be a factor with his size inside, since they didn’t have a so-called big man,” Perry said of Wayman. “We tried to take advantage of that mismatch.”

The Bulldogs only hit three of 11 free throws in the first half, but picked up their accuracy a bit in the second half, hitting 11 of 16.

“At halftime, we were three for 10 or something like that, poor, man,” Perry said. “We shoot free throws every day, man. We’ve got to play better, you know what I mean. We’ve just got to play better. It’s a good win going into our Christmas tournament.”

The Bulldogs travel to Oakland Mills in Columbia for their holiday tournament, a 7 p.m. start on Friday, Dec. 27.

After a 4-0 start, the Vikings (4-2) have dropped their last two games. They are scheduled to face George C. Marshall High of Falls Church, Va., beginning at 6:45 on Friday, Dec. 27, at James M. Bennett during the Governor’s Challenge holiday tournament in Salisbury.

SALISBURY — Cole Kratovil scored 20 points and Ben Cox had 14 as the Buccaneers stretched their win streak to four.

ST. MICHAELS — Monquell Haskins had a team-high 15 points and Max Vener tacked on an 11-point performance to pace the winners.

HURLOCK — Hugh Meehan and Xavior Jones each scored 18 points, and Jordan Dozier finished with 10 as the Lions remained undefeated.