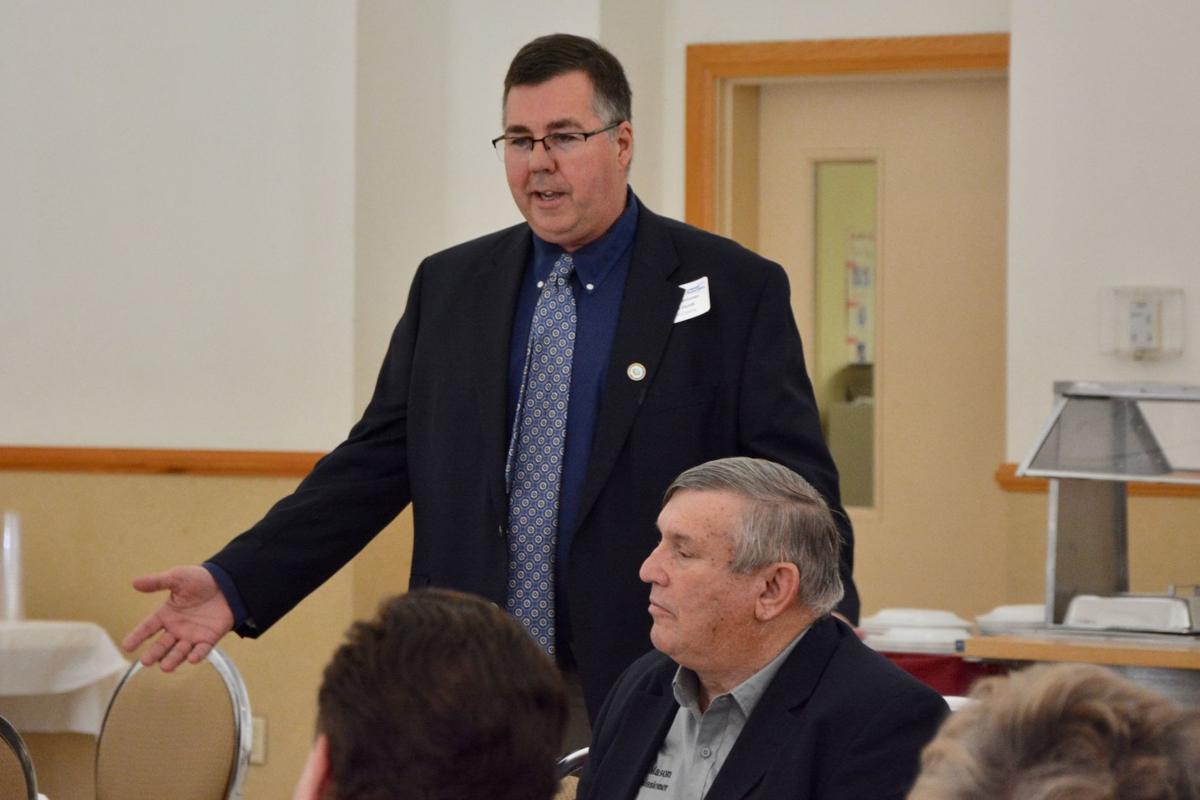 County Commissioners Bob Jacob, standing, and Tom Mason told the District 36 delegation to the Maryland General Assembly that fully funding the Kirwan Commission recommendations will be a hardship for Kent. 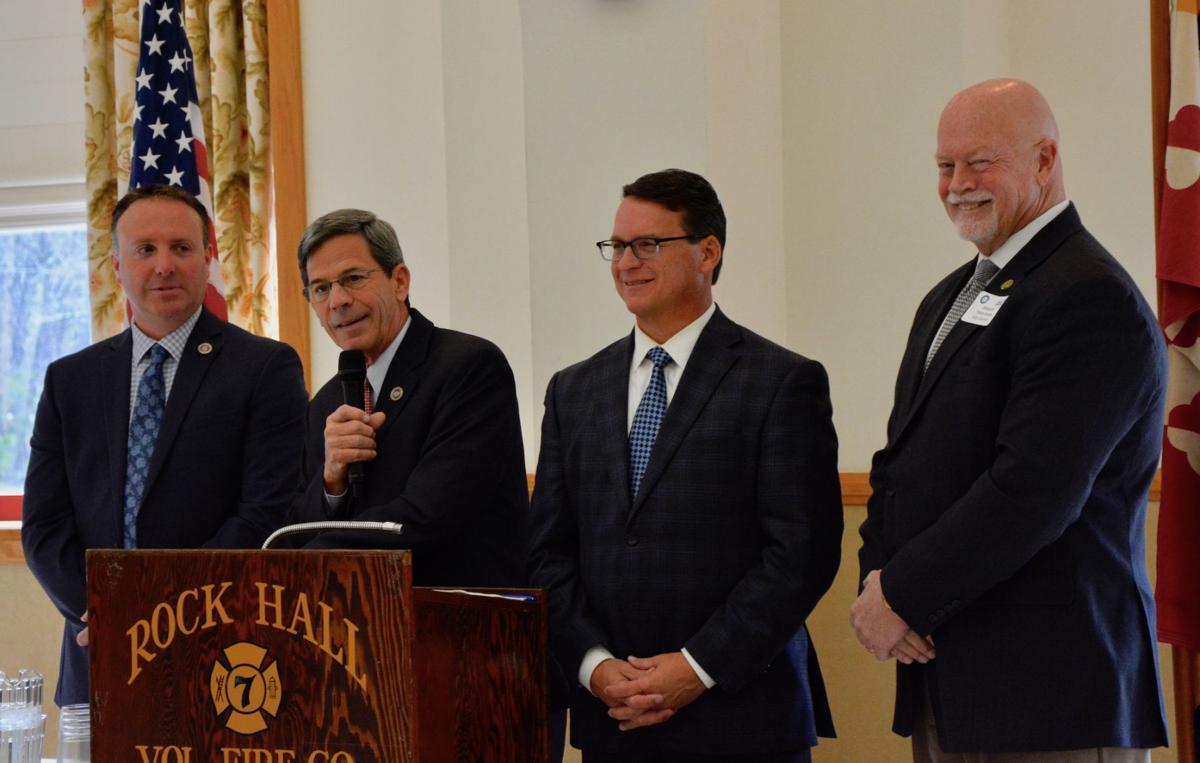 Jay Jacobs, Kent County’s delegate to the General Assembly, says he believes working with regulating agencies might be the best way to maintain inpatient beds at the Chestertown Hospital. From left, Del. Jeff Ghrist, Jacobs, Sen. Steve Hershey and Del. Steve Arentz talk Monday morning, Jan. 6, during a pre-session legislative breakfast in Rock Hall sponsored by the League of Women Voters and the Kent County Chamber of Commerce.

County Commissioners Bob Jacob, standing, and Tom Mason told the District 36 delegation to the Maryland General Assembly that fully funding the Kirwan Commission recommendations will be a hardship for Kent.

Jay Jacobs, Kent County’s delegate to the General Assembly, says he believes working with regulating agencies might be the best way to maintain inpatient beds at the Chestertown Hospital. From left, Del. Jeff Ghrist, Jacobs, Sen. Steve Hershey and Del. Steve Arentz talk Monday morning, Jan. 6, during a pre-session legislative breakfast in Rock Hall sponsored by the League of Women Voters and the Kent County Chamber of Commerce.

ROCK HALL — The new General Assembly session opened yesterday, but the priorities for local lawmakers are holdovers from 2019: boosting public education and maintaining inpatient beds at the hospital in Chestertown.

At a pre-session legislative breakfast Monday at the firehouse in Rock Hall, Sen. Steve Hershey and Dels. Steve Arentz (Queen Anne’s), Jay Jacobs (Kent) and Jeff Ghrist (Caroline) — all Republicans — said they expect good, bad and ugly over the next 90 days in Annapolis.

Everyone seems to agree that funding recommendations from the Commission on Innovation and Excellence in Education, informally known as the Kirwan Commission, will loom large.

“This is going to be the biggest decision we’ll make in decades,” said Ghrist, who serves on the Appropriations Committee.

Arentz, who serves on the Economic Matters Committee, said “Kirwan is going to be the elephant in the room.”

No one really knows what the costs will be.

The initial estimate is $4 billion annually over the next 10 years, if all recommendations are implemented.

Kent County’s share could be as much as $9 million.

Ghrist said the Kirwan Commission recommendations, intended to elevate the standards for teachers and expand resources available for all students, especially those who historically have been underserved, will dominate discussions in the Senate and House as the “biggest spending increase that our state has ever seen in history.”

Before that, it was the recommendations of the Thornton Commission’s Bridge to Excellence in 2014. Many of the issues then were never fully addressed, which is why some school districts in the state continue to underperform, Ghrist said.

Funding is the biggest challenge.

Also problematic is how to hold consistently underperforming school systems accountable, and how to win the bidding war for the best and brightest teachers — especially in math and science — who can make six-figure salaries in the private sector.

“There are so many things in this plan that we don’t want to waste money,” Ghrist said. “Four billion dollars is a lot of money, and we don’t know where this money is going to come from.”

Suggested funding sources, such as legalizing cannabis and sports gambling, will come up well short.

The only way to fully implement Kirwan is to raise taxes at the state and local levels, said Ghrist. “There’s no way around it.”

In answering a question from audience member Mike Waal about the “true cost,” Ghrist said the plan is constantly being vetted and he believes the figure will exceed $4 billion.

Hershey said he thinks there will be a gradual “ramp up” because no one is going to want to put their name on a tax increase. “It’s just the environment that we’re in. Tax increases, even from the other side of the aisle, are not looked upon favorably.”

Several of the big counties already have said they cannot afford to fully fund Kirwan in one lump sum.

William “Brit” Kirwan, the former University System of Maryland chairman who chaired the education commission, has said he wants it all or nothing.

Hershey told Monday’s breakfast group that legislators will come back with “what can we afford?”

It might be, “what can we get” until a new governor comes on board, Hershey said, noting that current Gov. Larry Hogan has blasted the panel he calls the “Kirwan Tax Hike Commission.”

County Commissioners Tom Mason and Bob Jacob, from their seats in the audience, said funding Kirwan would be a hardship for Kent County.

“If Kirwan goes through, the way it is right now, I don’t know what we do in Kent County,” Mason, president of the commissioners, said. “If you think your property taxes are too high now, which they are, there’s nowhere else to get money but through property taxes. I think it would be devastating to Kent County and many of your other smaller counties if something like this were to pass. I just hope wiser heads, saner heads prevail in the legislature.

“I’m all for education,” said Mason, whose three sons and one daughter are products of Kent’s public schools and who has grandchildren in the system now.

“I want good education. I think everyone in Kent County does. But money is not always the answer to making something better,” he said. “We’ve got to really look at this and not do things that hurt citizens, which is where the money comes from. ... We all want good education but we cannot destroy our communities in order to get that.”

He said Kent’s contribution to the Kirwan funding will be a big issue for the commissioners during their 2020 budget cycle.

Jacob said education is a priority that has to be weighed against a host of capital projects that include a 911 center, a jail, a courthouse and workforce housing in Chesapeake Landing.

With Kirwan “hanging over our heads,” it will be difficult to put money aside for these projects, Jacob said.

Hershey and Jacobs both talked about a change in strategy that could keep University of Maryland Shore Medical Center at Chestertown as a hospital with inpatient beds.

After learning that the proposal to move behavioral health beds from the hospital in Cambridge to Chestertown probably will not pass muster, the District 36 delegation met last month with Secretary of the Maryland Department of Health Bob Neall and representatives from the Maryland Health Care Commission and the Health Services Cost Review Commission.

A new model has emerged: make UM Shore Medical Center at Chestertown a terrific small hospital that maintains services, including inpatient care, and add a center of excellence for geriatric medicine on the third floor.

“It’s not a legislative thing. Working with regulators might be the best route,” said Hershey, who sponsored legislation last year that never made it to the governor’s desk. Leaders of the Save the Hospital campaign were told at the time that Hershey’s bill tanked because of objections from the two agencies that regulate hospitals.

A new route, working with regulators, appears to be the preferred strategy now.

Jacobs said he walked away from the meeting with Neall feeling “the most optimistic I have in years.”

The bill Hershey sponsored last year has been improved, and “it’s loaded and ready to roll,” Jacobs said.

But, “unless you get support from the regulators, who opposed it last year, you don’t want to take two shots the wrong way until you hit the road. We’re trying to make sure that we have ‘a go’ basically whatever we do, whether it be legislatively or not. We want to make sure we have everybody on board. And I think we’ve done a good job of trying to solidify all that,” he said.

The Conowingo Dam, increasing mental health services, affordable housing, tax credits for data centers, preemption (a Court of Appeals ruling that the state can override county and municipal land use laws) and the future of the Chesapeake Bay bridge also are expected to be discussed and debated during the next 90 days.

Hershey said a priority for him will be to help Choptank Electric Cooperative provide more broadband to rural areas by allowing the utility to set its own rates instead of going to the Public Service Commission.

Maryland is one of only two states that does not allow utilities to set their own rates, according to Hershey.

For Arentz, congestion on U.S. Route 50 due to the Bay Bridge is an issue. He supports closing off some of the exits on Route 50 and placing toll booths on both spans of the bridge ($2 each way) in hopes of discouraging drivers on U.S. Route 301 who currently get a free pass.