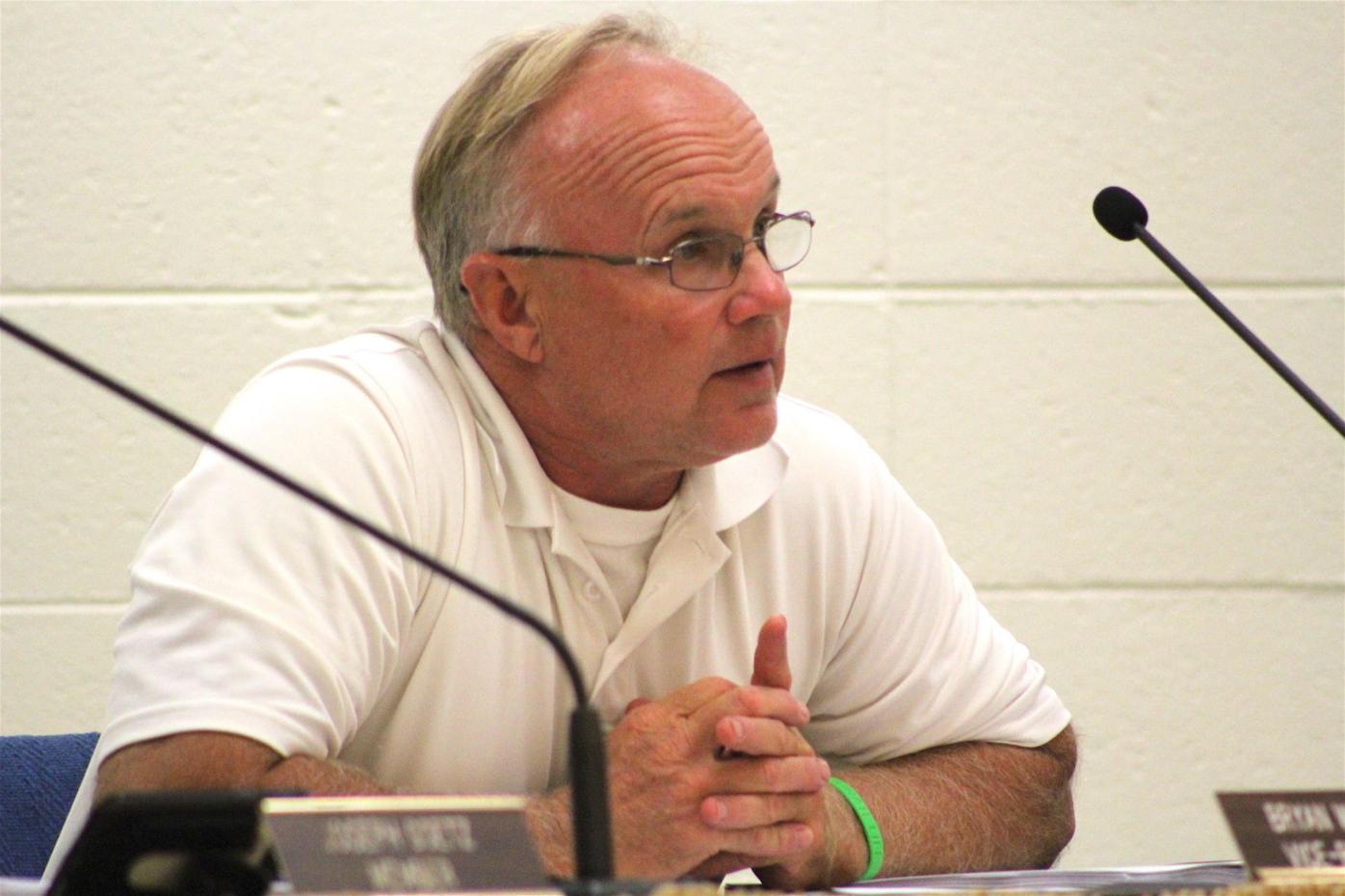 Bryan Williams, seen here during a 2017 meeting, attended his final meeting Monday night as a member of the Kent County Board of Education. 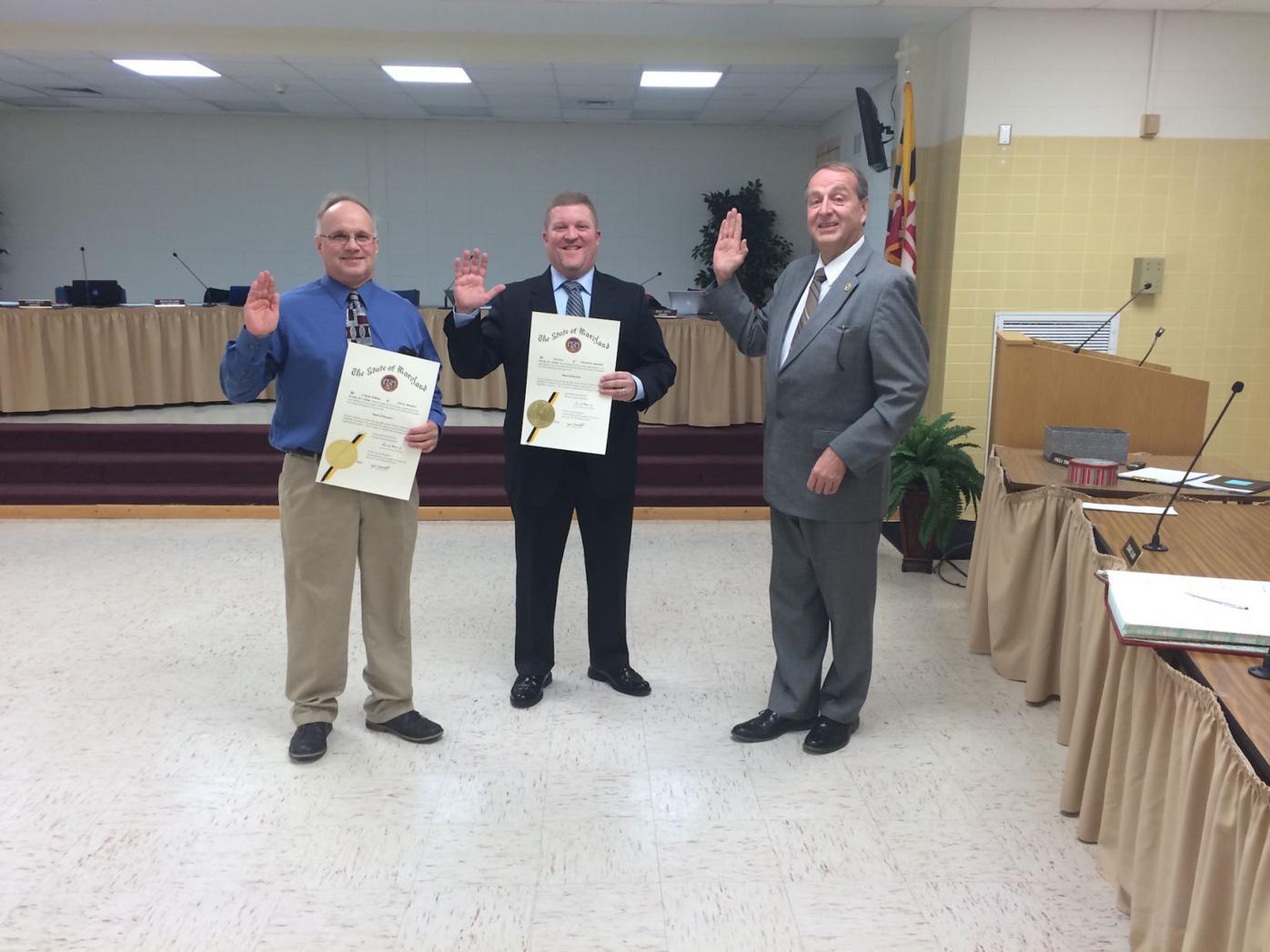 From left, Kent County Board of Education members Bryan Williams and Joe Goetz pose for a photo with Mark Mumford, clerk of the Circuit Court for Kent County, Jan. 7, 2017 after Mumford swore them in. 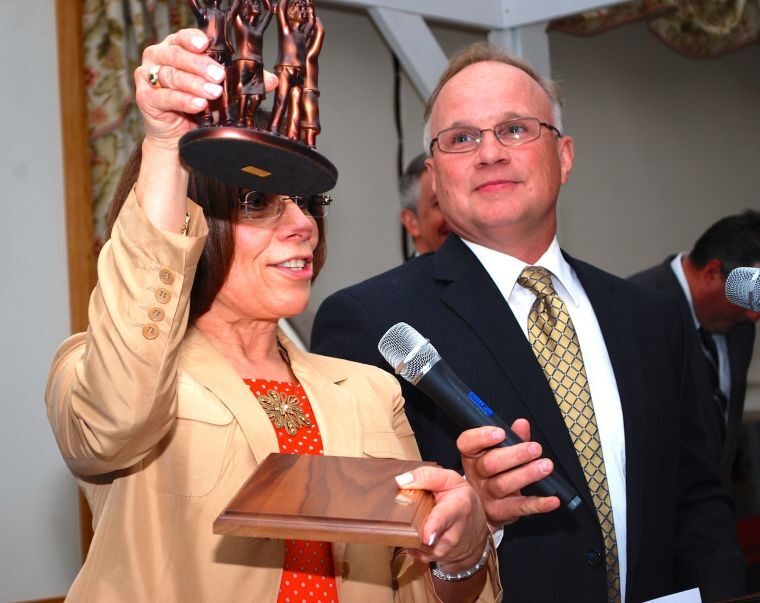 Kent County Board of education President Bryan Williams holds the microphone for Superintendent Karen Couch shows a statue featuring three students reaching for the stars — the award for the 2014 Kent County Teacher of the Year. 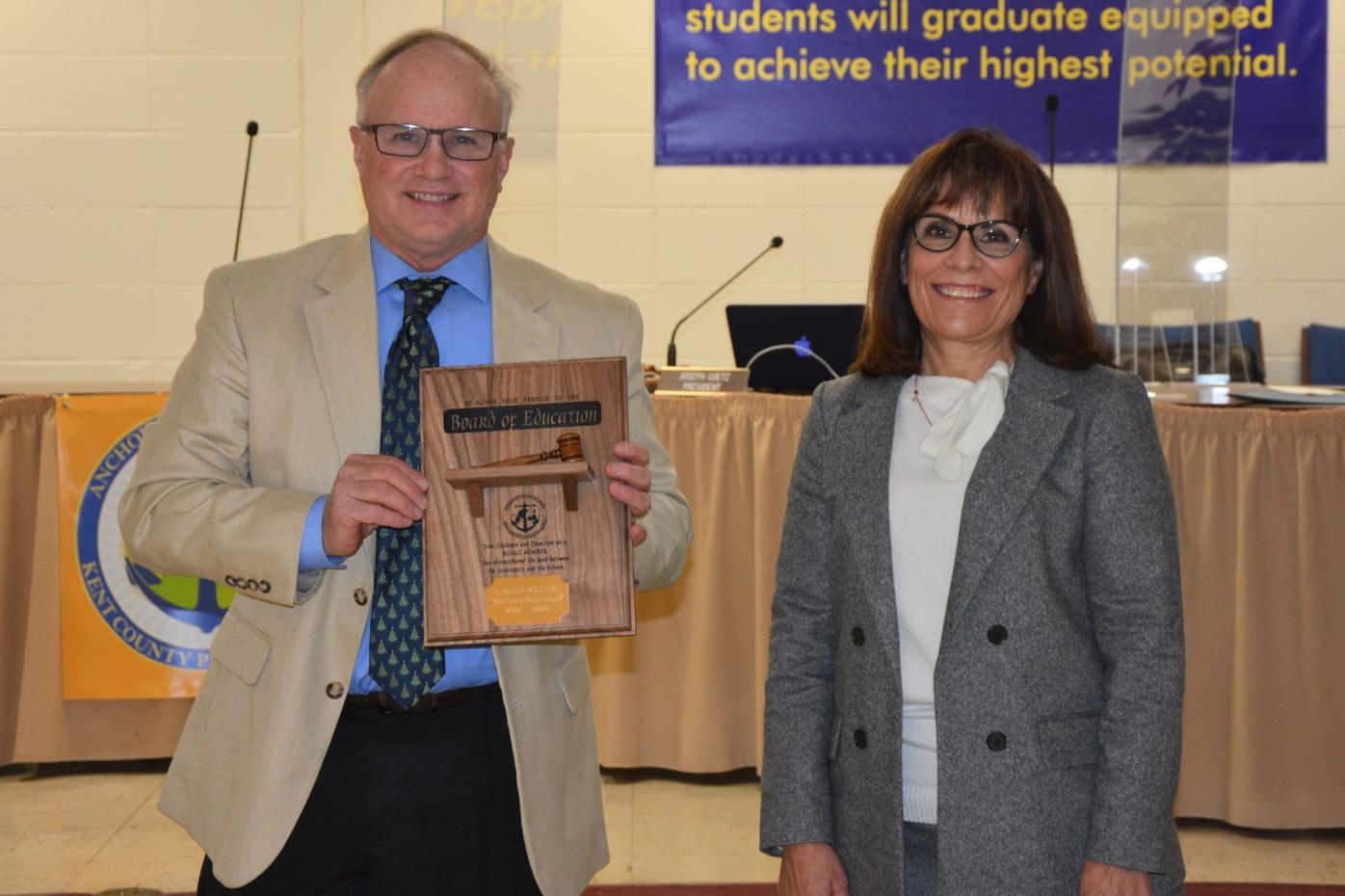 Bryan Williams, stepping down after 14 years as an elected member of the Kent County Board of Education, holds the plaque that was presented by Superintendent Karen Couch at the Monday, Dec. 14 meeting. 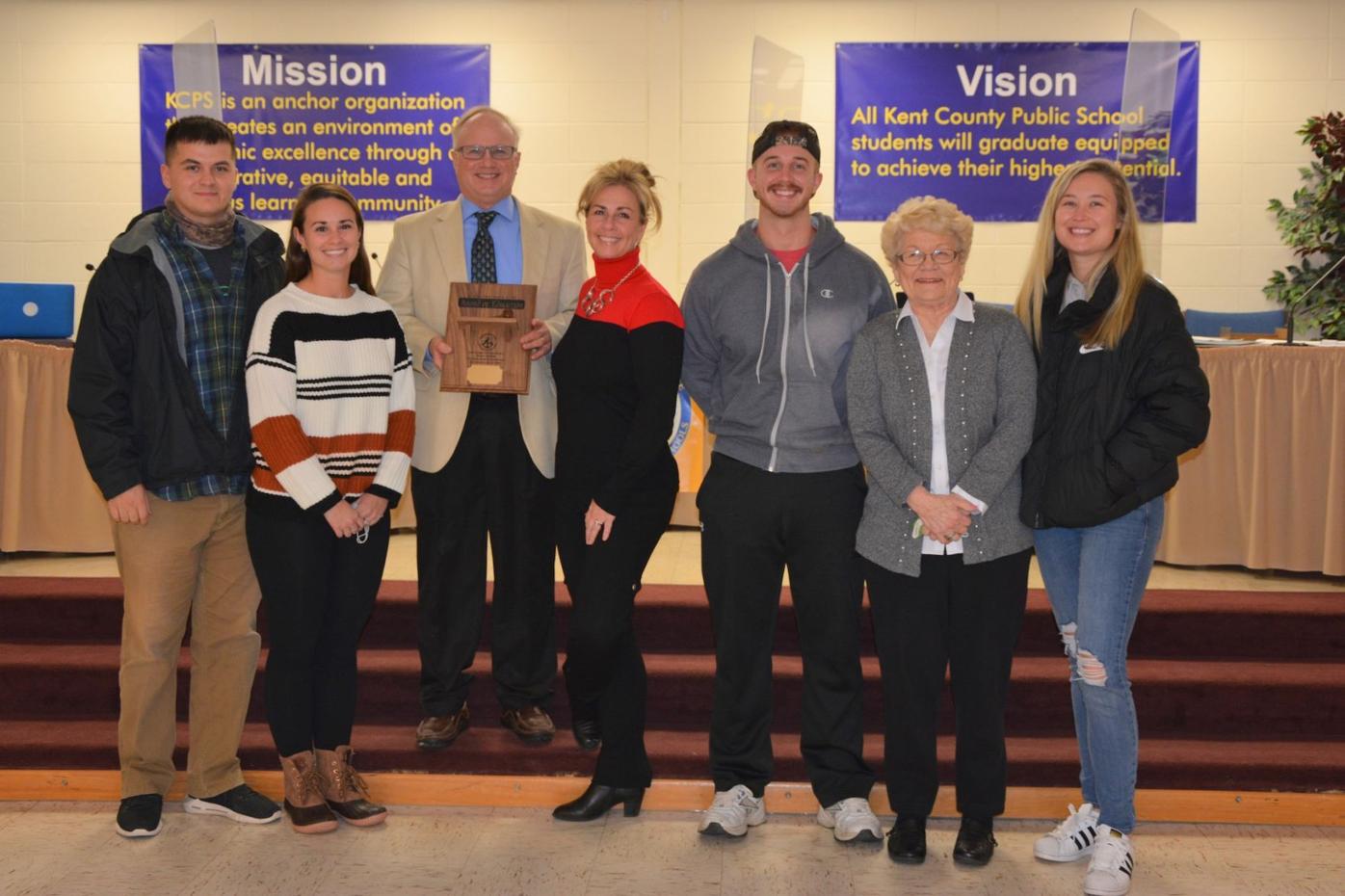 Bryan Williams, seen here during a 2017 meeting, attended his final meeting Monday night as a member of the Kent County Board of Education.

From left, Kent County Board of Education members Bryan Williams and Joe Goetz pose for a photo with Mark Mumford, clerk of the Circuit Court for Kent County, Jan. 7, 2017 after Mumford swore them in.

Kent County Board of education President Bryan Williams holds the microphone for Superintendent Karen Couch shows a statue featuring three students reaching for the stars — the award for the 2014 Kent County Teacher of the Year.

Bryan Williams, stepping down after 14 years as an elected member of the Kent County Board of Education, holds the plaque that was presented by Superintendent Karen Couch at the Monday, Dec. 14 meeting.

ROCK HALL — Longtime Kent County Board of Education member Bryan Williams received a send-off Monday night that played out like an episode of “This is Your Life.”

The school board meeting was Williams’ last after 14 years as a member. He was first elected in 2006, when terms were six years, then elected to four-year terms in 2012 and 2016. He opted not to run again this year.

Much of Monday’s monthly meeting was dedicated to Williams, with school board members past and present, Kent County Public Schools administrators and others praising his tenure, his willingness to speak with anyone who had a question or concern and his dedication to students and families here.

“You did what you thought was best for the kids. That’s really what this job is all about,” friend and former board member Brian Kirby told Williams.

In an interview Tuesday morning, Williams said Kirby was part of the reason he ran the first time.

With two children in the school system, Williams had been attending board meetings for a couple of years and, like many parents, had some concerns and complaints. Williams said Kirby asked him if he was willing to step up to the plate.

Williams also spoke about his decision to retire from the board, saying three terms totaling 14 years is a long time to serve.

He also is growing his family’s agriculture operation, having launched Red Acres Hydroponics five years ago and working now to establish an event venue on the farm.

At Monday’s meeting, Kirby spoke about the Williams’ family legacy of service to Kent County. Father Harry T. Williams served as an Orphan’s Court judge for nearly three decades and mother Sis Williams stepped in to finish out his term after he passed away in 2014.

Superintendent Karen Couch said Bryan Williams and Kirby influenced her decision to move from New Mexico to accept the position here. She said Bryan Williams has been a great board member and a good friend. She thanked him for the support he has given her and her family.

“I’ve always appreciated your candor and your common sense approach to problem solving. I appreciate that your decisions as a board member have always been what’s best for our kids,” she told him.

Bryan Williams’ wife Tracey Williams is the school system’s supervisor of secondary education and student services. She previously served as the principal of Kent County High School, located next door to the family’s Red Acres Farm in Worton.

Tracey Williams spoke about how her husband made himself available to talk to people any time of the day. She spoke about how approachable he was as a board member and how he listened to what people had to say. She said through those conversations, her husband was able to seek solutions to small issues before they became much larger problems.

“Just walk away knowing that making a decision that’s in the best interest of our kids is always going to be the best decision,” she told him at Monday’s meeting. “I’m proud of you.”

Bryan Williams talked about the stress being a board member and his wife being an educator could put on their marriage.

“I like to thank her and maybe apologize to her for 14 years of venting. And she looks at education one way and I look at it a different way,” he said Monday night.

There were letters from past board members Jeff Reed and Michael Harvey.

Writing about the importance of government at the local level, Harvey called Bryan Williams “a true citizen leader” and said he “has done so much to bring education to every single young person and every family in Kent County.”

“Bryan has devoted himself to educating the next generation of American citizens and leaders,” Harvey wrote. “He is an inspiration to me and to many others.”

Reed highlighted their board’s push to offer universal pre-kindergarten in Kent County schools when Couch was brought on board.

“Today, because of our efforts, all of our children are reaping the benefits of early learning,” Reed said in his letter.

Reed also wrote about how Bryan Williams took time to research issues before making a decision.

Bryan Williams said board members should not rubber stamp everything that comes before them. He said while that may not always look good, it is important.

Board Vice President Trish McGee, who also is associate editor of the Kent County News, said she first met Bryan Williams while working for the paper. She covered the Board of Education meetings for more than a decade before deciding to run herself.

She spoke about the difficult decisions Bryan Williams faced during his tenure and his willingness to hear different views.

She said when the school system was looking to consolidate middle schools more than 10 years ago, Bryan Williams first opposed the move, but then changed his vote in favor of it.

McGee was president of the school board during the years when it made some of its most tumultuous decisions. She thanked Bryan Williams for serving as her vice president.

“We talked a lot. I really relied on him very much. And when you live in a small community, it’s hard, if you’re doing it right, not to become close — and family,” she said.

Current President Joe Goetz said Bryan Williams truly exemplifies what it means to be a public servant. Goetz spoke about how Bryan Williams was always available to discuss issues.

“Thank you for your service. Thank you for what you’ve done for Kent County Public Schools. Clearly, you have made a huge impression on all of us,” Goetz told him.

Board member Nivek Johnson first met Bryan Williams in 2006, when Johnson’s grandmother was on the school board. In 2012, Johnson, then 18 years old, ran for school board in a three-man race for two seats, losing to Kirby and Bryan Williams.

Johnson said it was during the 2012 election that he really saw Bryan Williams for the school board member that he was.

“We have a lot to learn from Mr. Williams because he is one who believes in working together. He is one who brings us all together to ensure our children are getting the education that they so deserve,” Johnson said.

Board member Wendy Costa also made note of that civility, saying she thinks Bryan Williams sets an admirable tone.

As the meeting moved through the agenda, additional administrators offered praise for Bryan Williams’ service.

Bryan Williams took time to mention at the meeting every board member he served with, offering special thanks to Kirby, whom he called a “mentor.” He spoke about how Kent County Public Schools was led by three different superintendents during his tenure. He thanked everyone: teachers, support staff and administrators.

He said one of the most important lessons he learned about being a board member came early on at a state conference he attended. He was told about the importance of a board functioning as a team.

Bryan Williams thanked his now-grown children, who also played a big part in his decision to run for a seat on the board as they were still in school at the time.

“My daughter is a dentist and my son is a school teacher — two huge, important roles and they both came back to the county,” he said. “I’m very proud of them. They were very active in school. I loved going to their school events.”

He spoke about how Harvey, Kirby, Reed and himself sat down while they were serving together and looked over calendars for the schools, ensuring that at least one board member would be in attendance at each event being held. He said it was important to show students that they cared.

“Every night we were somewhere. That took a lot of time, but we made a commitment and we stuck to it. And to me that was one of the strong points of being on the board,” he said.

He said that while he appreciated all the kind words and accolades, he was only standing up for the children.

“Go Kent,” he said in closing Monday night. Those words are painted on a silo at his family’s farm.

It was Bryan Williams who made the motion to adjourn the meeting later that evening, his final motion after 14 years as a member of the Kent County Board of Education.